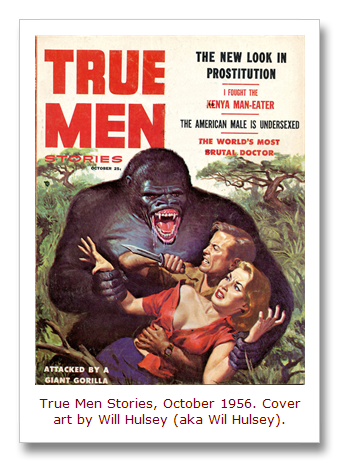 In the first half of the 20th Century, tales and scenes of gorillas who carried away white women were fairly common in magazines, books and movies from various genres — including adventure, horror and comedy.

Well known examples include the Tarzan stories by Edgar Rice Burroughs and the film with the biggest girl-crazy ape of all time, King Kong.

Beyond these, there’s a long list of vintage adventure, horror and comedy films with guys dressed in gorilla suits trying to carry off some screaming damsel. (Check out the eBay Guide to Ape and Gorilla Movies of the 1930s, ‘40 and ‘50s.)

After writing my recent post about “Monkey Madness,” I decided to climb out on another branch of the simian family tree and feature some men’s adventure magazine covers in the girl-crazy gorilla subgenre.

Two of them are Will Hulsey animal attack masterpieces (and I use that word seriously). Hulsey painted the one at left on the cover of the October 1956 issue of True Men Stories.

It features a fierce-looking ape menacing a manly man and a gorgeous babe. He is trying to save her by fighting the huge beast with a knife. She is looking distressed, as damsels did, and wearing one of Hulsey’s trademark red blouses. (Conveniently unbuttoned to show some damsel cleavage.)

At right is another Hulsey gorilla attack cover painting. 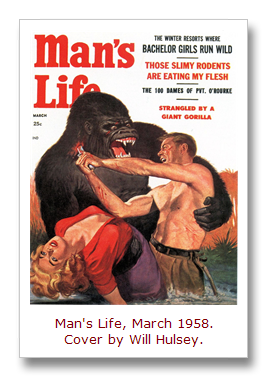 It’s on the March 1958 issue of Man’s Life, the men’s adventure magazine that probably featured more Hulsey animal attack covers than any other from the early-1950s to the late 1960s.

The scene on the Man’s Life cover almost seems like a continuation of what’s happening on the True Men’s Stories cover.

True Men Stories was published from 1956 to 1965 by Feature Publications, an affiliate of Crestwood Publishing, which also published Man’s Life.

In 1966, True Men Stories was bought by Stanley Publications and stayed in print until 1973. Stanley, and it’s affiliate Normandy Associates, were second only to Martin Goodman’s Magazine Management in the publication of men’s pulp magazines in the 1950s, 1960s and early 1970s.

Below are two more of my other favorite girl-crazy gorilla covers, both of which have classic images of apes toting away busty babes. (To satiate their brutish, animal lust, no doubt!.)

The artist who did the wild gorilla cover on the March 1961 issue of Stanley Publications’ Man’s Adventure is uncredited.

The cover art on the April 1957 issue of Rage for Men was painted by Clarence Doore, one of the greatest American pulp artists. (Rage for Men was a short-lived title published by Arnold Magazines in 1956 and 1957.) 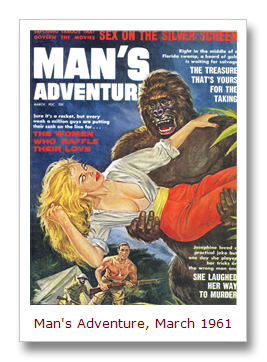 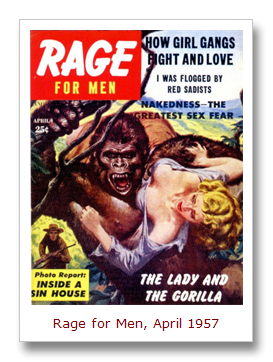 Ah yes, those were the days. When we assumed that gorillas were more dangerous than humans.

Today, of course, most of us humans — and the remaining gorillas that are left in the wild — know it’s the other way around.