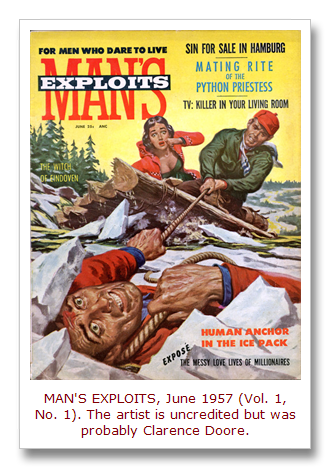 The meaning of the word exploit depends on whether it’s a noun or a verb.

The noun exploit means a notable adventure or heroic act. But the verb exploit generally has a negative connotation. It implies mistreatment.

The cover painting for the story about Cinque and the Amistad that I featured in my previous post is just one example.

The first issue of Man’s Exploits, dated June 1957, started this classic men’s adventure magazine off with a bang. It has a truly great action cover painting and some wild stories.

In the cover painting, an agonized man is swimming on his back through ice floes, straining to pull a rope held by another guy on a raft.

There’s also a worried “Indian” babe on the raft, showing an amazing amount of cleavage given how cold the scene looks. (She must have been very warm-blooded.)

The adventure yarn this painting was done for — titled “HUMAN ANCHOR IN THE ICE PACK” — actually is about an exploit in the heroic sense.

The guy in the water bravely jumped in to try to haul the raft to shore and save his buddy and the girl. In the story, he succeeds — but there’s a twist. He makes it to the shore, then freezes. His body creates a frozen “human anchor,” allowing the other guy to pull the raft to land. Damn, that’s a manly exploit! 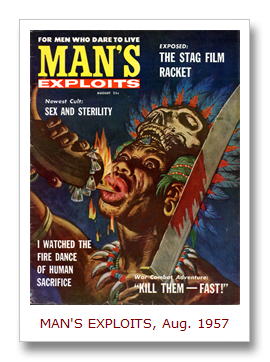 No artist credit is given for the painting. However, the date, the style and the shape of the woman’s face are clues pointing to pulp art legend Clarence Doore.

The eye-grabbing painting on the August 1957 issue shows a very scary-looking African witch doctor wearing a jawless human skull on his head, holding a bloody machete and drinking what seems to be liquid fire.

It goes with the story “I WATCHED THE FIRE DANCE OF HUMAN SACRIFICE.” But I can also envision a scenario in which it might work for another story in that issue, “Newest Cult: SEX AND STERILITY.” 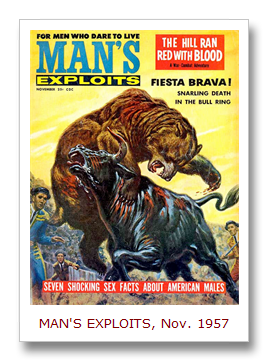 The cover of the November ‘57 issue shows a bear and a bull ripping each other to shreds in a bullfighting arena.

Since I’m one of those oddballs who like animals more than most humans, I have a hard time with this one.

But if I look at it the way I look at monster-vs.-monster fight scenes in a sci-fi movie, I have to admit it’s kinda cool.

On the sexploitation front, Man’s Exploits was sort of an equal opportunity exploiter. 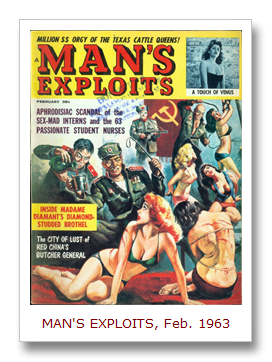 The unfortunate targets of the whipping are American-looking women who all (by an amazing coincidence) are gorgeous, busty and have perfect hair. 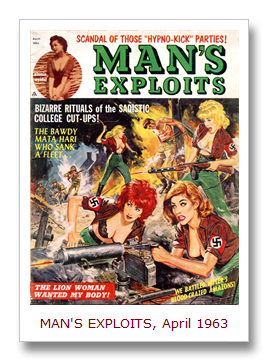 The April 1963 issue of Man’s Exploits features male bondage and torture. (Is that reverse sexism?)

The cover painting on that issue shows three of “HITLER’S BLOOD-CRAZED AMAZONS” firing machine guns at American troops. (Yep, they are all gorgeous, busty and have perfect hair.)

Meanwhile, oblivious to the battle around her, one evil Nazi Amazon in the background is whipping a hapless, bloody male prisoner of war who’s tied to a post.

On a fashion note, the story says the Nazi babes are all wearing the special bosom-revealing uniforms designed by Hitler himself for Ilsa the She-Wolf.

OK, I made that part up.

But I’d swear the exposés in the April ‘63 issue of Man’s Exploits about the “SCANDAL OF THOSE ‘HYPNO-KICK’ PARTIES!” and the “BIZARRE RITUALS of the SADISTIC COLLEGE CUT-UPS!” are true stories.

I think I went to some parties like that when I was in college back in the Sixties.