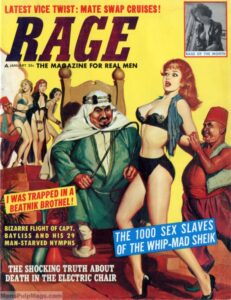 RAGE is one of my favorite low-budget men’s pulp magazines, though I have always been a bit puzzled by its name.

Was it supposed to appeal to some subset of guys who were really angry?

However, the editor’s note that introduces the very first issue (December 1956) does express some manly grumpiness about the state of men’s magazines. It even sounds slightly angry.

This is the first issue of RAGE, the best damned men’s magazine in the country. Here’s why we know so: In a day and age when men’s magazines are pussyfooting over one hot subject after another, RAGE plans to call a spade a spade, a crook a crook, a bum a bum. We’re pretty sure that’s what you want in a magazine for men-we know it’s what we want. If you think the way we do, stick with us.

I guess THE BEST DAMNED MEN’S MAGAZINE IN THE COUNTRY was a bit too long for a name. And, RAGE does at least seem better than GRUMPY or SLIGHTLY ANGRY.

Initially, the full name shown on covers of this no-pussyfooting periodical was RAGE FOR MEN.

It was one of several men’s adventure magazines published by the pioneering comics and magazine publisher Everett M. “Busy” Arnold. Others included GUSTO (one of other personal favorites), MAN’S PERIL and WILD. 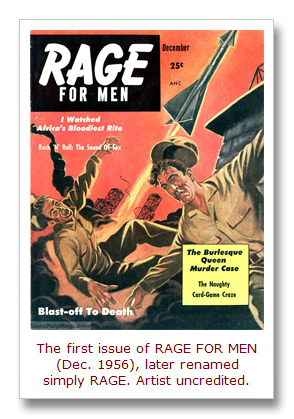 After a year-and-a-half hiatus, Arnold resurrected the magazine in September 1960 with the shorter title RAGE on the cover.

At that point, it was subtitled “THE MAGAZINE FOR REAL MEN” — making it one of a number of magazines that were meant for “real men” who wanted “real” adventure stories back in the 1950s and 1960s. (As opposed to those fashion-conscious girly men who wanted to read candy-ass, egghead fiction stories like those published in magazines like PLAYBOY, ya know?)

The second series of RAGE magazine was published bimonthly (with a few gaps) until July 1964 by Natlus, Inc., another company owned by Busy Arnold. For some reason the last few issues reverted to using the title RAGE FOR MEN on the cover.

Throughout both runs the content of RAGE/RAGE FOR MEN was the typical mix common to most vintage men’s adventure mags: pulpy, over-the-top action and adventure yarns, exposés and sexposés, “true crime” stories, cheesecake photo spreads, sexist cartoons — and some very cool, but generally uncredited, cover paintings and interior artwork.

For example, the painting used on the cover of  the January 1963 issue is a classic, well-executed “sweat magazine” bondage-and-torture scene.

It shows a chubby, demonic-looking Arab sheik getting ready to use a whip on a busty, barely-clothed redhead as two henchmen look on and several other hapless, bound damsels cower in the background.

There’s no artist credit for the cover painting and no visible signature. But it looks like a John Duillo painting to me. When I asked my friend Rich Oberg, the world’s foremost collector of and authority on men’s adventure magazine art, he agreed.

The cover painting was also used inside, as an interior illo. It goes with the story “THE THOUSAND SEX-SLAVES OF THE WHIP-MAD SHEIK,” one of a number of outré gems in the January 1963 issue of RAGE.

On the contents page, that story is listed in the so-called “True Adventure” section, along with another “true” tale (nudge, nudge, wink, wink) about the “TORRID TEMPTRESS OF THE KOREAN WAR.” 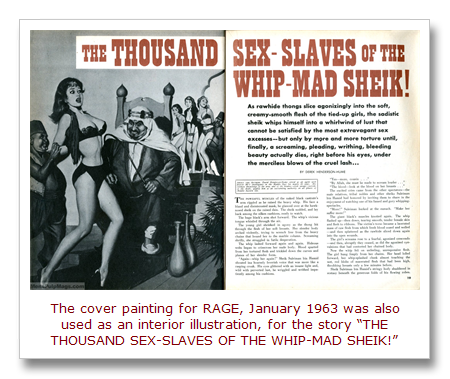 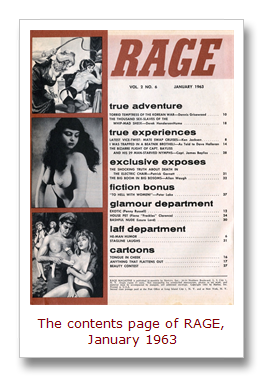 The illustration for this spicy Korean War war story is signed “L.R. Summers,” an alternate name used by Leo Summers (full name Leo Ramon Summers). He is probably best known for his superb science fiction pulp magazine artwork, but he also did illustrations for men’s magazines. 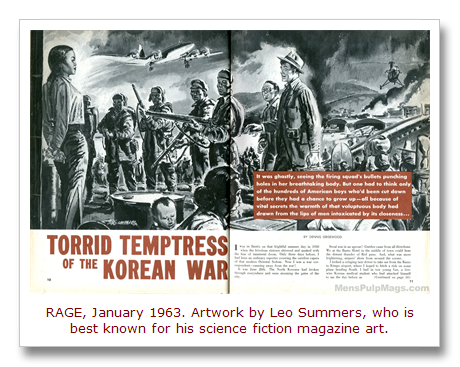 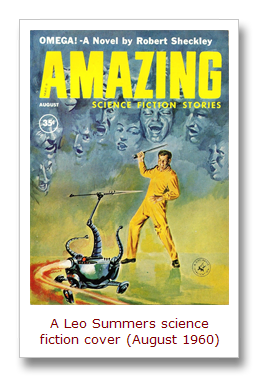 Several other wild stories are included in a section of this issue of RAGE that’s dubbed “True Experiences.” This is also a section where the word true means something other than, er, true.

The stories listed under the “True Experiences” heading include two awesomely gonzo yarns: “I WAS TRAPPED IN A BEATNIK BROTHEL!” and “THE BIZARRE FLIGHT OF CAPT. BAYLISS AND HIS 29 MAN-STARVED NYMPHOS.” 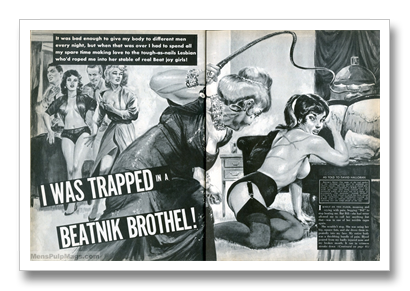 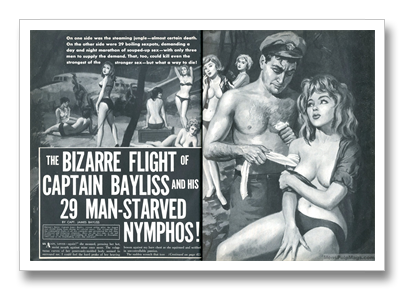 The “Exclusive Exposes” section of the magazine includes two articles of historical interest from a cultural perspective.

One is a graphic and grim article about executions, titled “THE SHOCKING TRUTH ABOUT DEATH IN THE ELECTRIC CHAIR.”

The second, titled “THE BIG BOOM IN BIG BOSOMS,” provides an intriguing overview of men’s fascination with well-endowed women, the tendency of many women to worry about their bust size, and an intriguing mention of “the new tricks of ‘mamaplasty,’ as plastic breast surgery is called by the medics.” Yep, that misspelled term refers to breast augmentation using implants, a procedure that was relatively new in 1963. Of course, “the medics” actually spell it mammoplasty or mammaplasty, since it involves the mammary glands. I’m not sure if “mamaplasty” was a mistake by the author, a typo or a Freudian slip.

There’s also a “Fiction Bonus” story titled “TO HELL WITH WOMEN!” (which turns out to be a humorous fiction yarn). 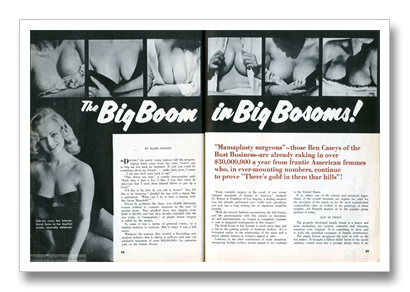 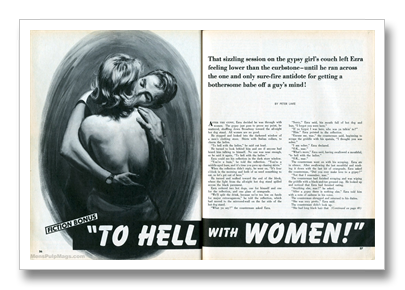 And, in the “Tongue in Cheek” section there’s a classic Bill Ward cartoon, featuring one of his trademark, giant-boobed bimbo babes. (Beneficiaries of the cartoon version of “mamaplasty.”) 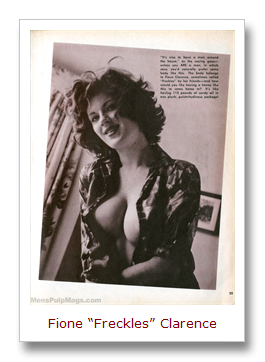 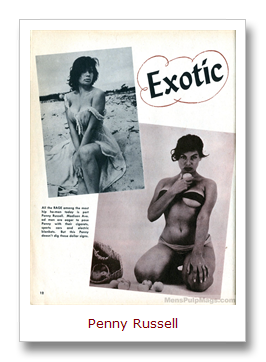 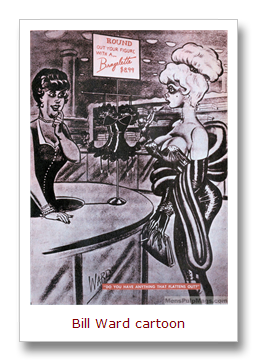 As you can tell, the January 1963 issue of RAGE is far less serious-minded than something like the the BATTLE CRY issue featured in my previous post here.

But, like that issue of BATTLE CRY, I view it as a great example of a men’s pulp adventure magazines in its own way.

So, I’ve added a complete PDF copy of it in the MensPulpMags.com virtual newsstand. Just click on this link or the image of the cover and contents page below to download it.