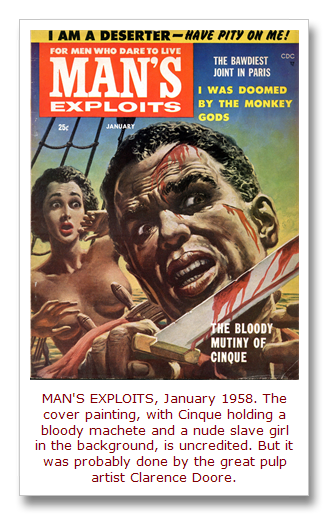 In the politically incorrect, sensationalized realm of vintage men’s adventure magazines, “true” stories based on historical facts usually had some angles and embellishments you don’t find in other sources. 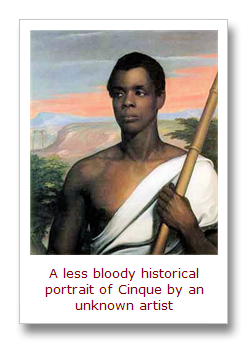 Case in point: the men’s pulp mag version of the story of Cinque and the Amistad that I’m featuring in this post.

As you know if you saw Steven Spielberg’s movie Amistad (1997), Cinque led a famous rebellion of African slaves on the Spanish ship La Amistad in 1839.

They killed the ship’s captain and cook with the sugarcane machetes they found on board and took over the ship.

Cinque then ordered the remaining crew members to sail back to Africa, but they tricked him and ultimately sailed into Long Island Sound.

On August 26, 1839, the Amistad was seized by U.S. officials. This led to a widely publicized court case over the status of the Africans on the ship.

Under the hairsplitting law at the time, it was legal to own slaves who were already enslaved (and their children) but illegal to transport more Africans to the Americas as “new” slaves.

On March 9, 1941, the U.S. Supreme Court ruled that the Amistad captives had been transported illegally. As a result, they were freed and returned to Africa.

The January 1958 issue of the men’s adventure magazine Man’s Exploits (Vol. 1, No. 4) includes a story about Cinque and the Amistad that’s based on these historical events. 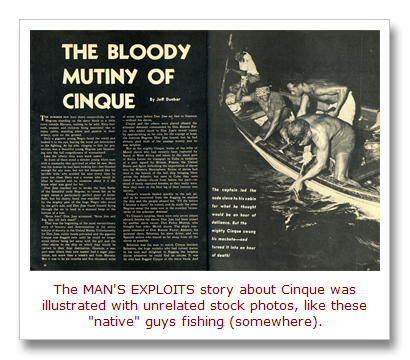 But, of course, like any story published in a men’s pulp magazine, it’s a bit spicier than what you’d read in a mainstream magazine. And, Man’s Exploits was among the spiciest of the men’s pulp mags.

It was published by Everett M. “Busy” Arnold.

Busy was one of several early comic book publishers who moved on to men’s magazines and adult humor magazines after the 1954 Comics Code prohibited any blatantly violent or sexy images or storylines in comic books.

Through his companies Arnold Magazines and Natlus, Inc., he published a number of classic men’s pulp mags, including Gusto (which was banned by the U.S. Postal Service), Man’s Peril, Rage, Rage for Men and Wild for Men.

The Cinque story in the January 1958 issue of Man’s Exploits is promoted with a bloody (and bloody good) painting on the cover. It shows Cinque holding a bloody machete and a busty, nude African babe in the background. 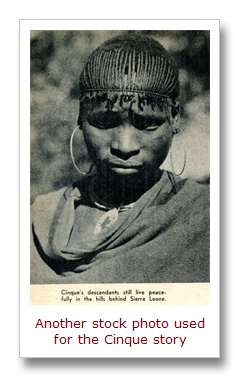 The artist is uncredited, though I’m pretty sure it’s by the great pulp artist Clarence Doore.

Inside, the story is illustrated with stock photos that essentially have nothing to do with Cinque and the Amistad. But they were undoubtedly cheap (or free) — and they showed some black people.

I especially like the photo of the black guys in the boat. Obviously, it’s not the Amistad. Just some “natives” in a little fishing boat.

Of course, no men’s pulp mag story would be complete without an enticing blurb written by the editor. The blurb on the second page of this story, next to the boat guys, says:

“The captain led the nude slave to his cabin for what he thought would be an hour of dalliance. But the mighty Cinque swung his machete — and turned it into an hour of death!”

By the way, check out the historic illustration shown below.

It’s from a book about the Amistad captives published in 1840.

And, even though it’s not quite as bloody as the cover painting used on Man’s Exploits, I think Busy Arnold would have liked it.