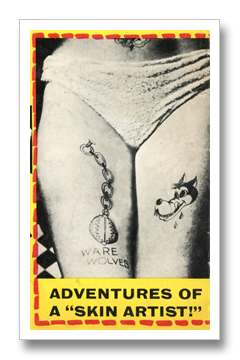 Recently, I read an article in the June 1964 issue of Men in Danger magazine that made me think of tattoo artist Kat Von D, the star of the reality TV show LA Ink. 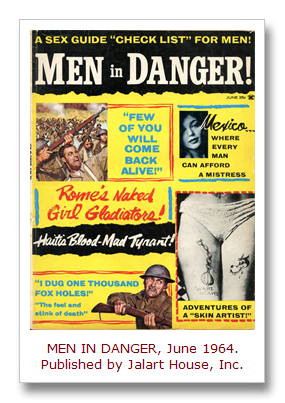 The article is a photo feature about women who were getting tattoos in the early Sixties, titled ADVENTURES OF A “SKIN ARTIST!”

The “skin artist” featured in the article is the legendary London tattooist Charlie “Cash” Cooper.

Back then, in America, England and other “civilized” countries, tattoos were much less socially acceptable than they are today — especially on women.

Apparently, even Cash Cooper dissed some women who wanted tattoos, or at least their taste.

In the 1964 Men in Danger article, Cooper is quoted as saying:

“There’s two kinds of women, usually, who ask for strange tattoos…The frustrated type who can’t get a man, and the older type who feels that her natural charms are no longer enough.”

In case you’ve missed Kat Von D in LA Ink and the many celebrity gossip stories and posts about her, Kat is hot, sexy and heavily tattooed.

I suppose some of her tats might be called strange.

But she obviously isn’t one of the “two kinds of women” Cash Cooper described.

Of course, things have changed a lot since Cash’s heyday.

Tattoos are common now. It’s almost uncool not to have some tats if you’re a young person or a celebrity.

Today, the tattoo artwork is more elaborate, more colorful. And, the technology is much better and safer. 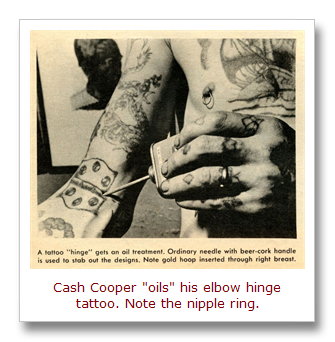 But the tattooed women shown in the Men in Danger story were ahead of their time.

So was Cash Cooper.

Not only was he a skin artist long before it became a hip profession, one of the photos in the article (at right) shows that he had a nipple ring.

That was pretty rare in 1964, when body piercing was even less common and more risqué than tattoos.

Cooper got his first tattoo during his time in the military, like many men.

When he was in the British Navy, other sailors showed him how to create tattoos with low-tech homemade tools.

“In the Navy, they don’t have electric needles,” the article explains. “An ordinary needle, with a beer-cork handle, is used to stab out the designs. Various printing inks, including India ink, are pressed into the wounds, which may fester uncomfortably for several weeks before ‘healing.’”

Cash had better equipment at his tattoo parlor in London’s Leicester Square, which was a downscale “fun fair” area in 1964. (It’s a more trendy shopping and entertainment area today.) 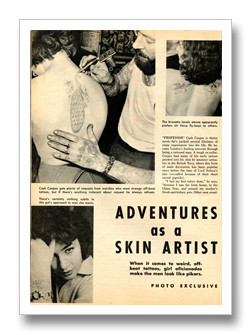 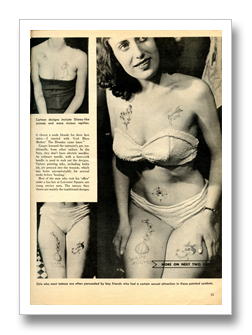 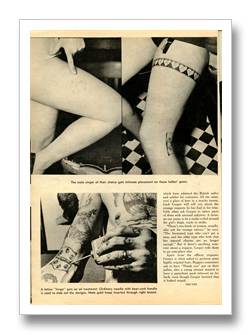 One women (pointing to her leg above) simply has “I Love Elvis” tattooed on her thigh, in a thin script that’s difficult to see in the photo. However, there are others who have more interesting tats. 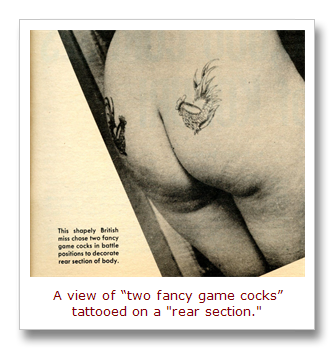 And, over a beer, Cash Cooper confides to the Men in Danger interviewer that he sometimes received “strange requests” from women who wanted tattoos.

He says some asked him “to tattoo parts of them with unusual objects.”

A favorite image was a snake coiled around the woman’s thigh, ready to strike. (Kind of a womanly version of Snake Plissken’s manly solar plexus tat.)

Cooper doesn’t mention the humorous “‘WARE WOLVES” tattoos on the woman’s thighs featured in the photo on the cover of the magazine.

I assume they were a warning to men with wolfish tendencies, signaling that they should beware if they tried to part those thighs.

I’m not exactly sure what message was being sent by the “two fancy game cocks in battle positions” that decorate the “rear section” of a woman in another photo.

But the dueling butt roosters were apparently not “indecent” by Cash Cooper’s standards.

Cash noted to the interviewer that “if there’s anything indecent about a request” he gets for a tattoo, he tells the woman “to go someplace else.”

If you’re into tattoo history and want to read the article I’ve been discussing, just click this link to download it in PDF form.

If you just want to ogle some more photos of Kat Von D, here’s an image search link for ya.

By the way, Cash Cooper — aka “Professor” Cash Cooper — was something of a celebrity himself back in the day and is still renowned among fans of traditional tattoo styling.

There are a quite a few web pages and articles that mention or show photos of him.

I gotta admit, though, I’d much rather look at photos of Kat Von D.

For example, check out the nude shot she did for the PETA poster that says “I’D RATHER TATTOO NAKED THAN WEAR FUR.”

I think Kat could probably talk me into going Vegan.