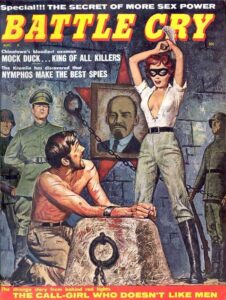 Recently, Richard Greene, one of the the many talented and knowledgeable artists who have become members of the Men’s Adventure Magazines Facebook Group, posted a link to an interesting opinion piece about a man who accidentally helped create the men’s adventure magazine genre — psychiatrist Fredric Wertham.

The piece was written by novelist and playwright Chris Gavaler on his blog about superheroes. It’s titled “Fredric Wertham: Not a Complete Idiot After All.”

I don’t quite buy Gavaler’s defense of Wertham. But the historical information he provides in it is fascinating. And, it reminded me of a post I did about Wertham quite a while ago, which I’m reprinting tonight for newer readers of this blog who may have missed it….

In the 1950s, America was gripped by two different cultural witch hunts that were serendipitous boons to men’s adventure magazines.

One was the Communist witch hunting spree that was dubbed “McCarthyism” by the great political cartoonist Herblock (Herbert Block).

Along with the Korean War and the Cold War, McCarthyism made it patriotic to hate Commies and portray them as evil, sadistic villains. This became something the men’s pulp magazines excelled at and many of their readers relished.

The other witch hunt of the era was the comic book hysteria created by German-born psychiatrist Fredric Wertham and his 1954 book Seduction of the Innocent, which claimed that many of the comics kids like me loved at the time were corrupting our brains and turning us into juvenile delinquents and sex perverts.

To protect our minds, our precious bodily fluids and society, Congress responded by holding McCarthyesque hearings on the content of comic books. And, the comic book industry ended up neutering itself by creating the puritanical “Comics Code.”

Thanks to Wertham and the Comics Code, the gloriously gory cover art once common on some comic books became verboten. No comic could use the words like “horror” or “terror” in its title. No images of graphic violence could be shown. No hints of sexuality were allowed. No “indecent or undue exposure” of the naughty parts of the body and no “unsavory” or “salacious” illustrations. No scenes dealing with “walking dead, torture, vampires and vampirism, ghouls, cannibalism, and werewolfism.” No stories that let criminals (or anyone else) get away with anything illegal or immoral without being punished. No this, no that, et cetera, et cetera, ad nauseum… 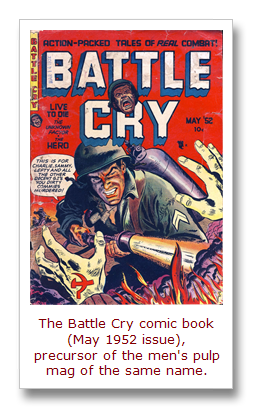 The 1954 comics hysteria and Comics Code resulted in the demise of William Gaines’ bloody (and bloody good) EC Comics, which published comic books like Tales from the Crypt, Shock SuspenStories, Weird Science, The Vault of Horror and The Haunt of Fear.

It also killed off the horror, suspense and war themed comics published by Key Publications, Gilmor and other companies owned by Gaines’ competitor Stanley Morse, such as Weird Chills, Weird Mysteries and Battle Cry.

William Gaines got even with Fredric Wertham by having great success publishing Mad Magazine and by living to see a resurgence in the popularity of his EC comics in print, as well as movies and a TV series inspired by Tales from the Crypt.

Stanley Morse got even with Wertham by becoming one of the biggest publishers of men’s adventure magazines from the late 1950s to the mid-1970s.

As noted in the Taschen book Men’s Adventure Magazines In Postwar America:

“Stanley Morse – the ultimate fly-by-night publisher, and creator of some of the most extreme horror comic books of the early fifties – transformed his Battle Cry comic book into a men’s adventure magazine. Best known as a comic for a cover on which an American GI graphically torches Korean soldiers with his flame thrower, Battle Cry’s initial foray as a men’s adventure magazine featured a sedate cover painting of two GIs driving a coffin-carting jeep. It was not long before images of extreme mayhem again reigned, including bondage, exotic sacrificial rites, and those ever-lovable, heroic World War II hookers. Stanley Publications soon became the second-largest publisher after Martin Goodman, producing at least eighteen titles and enduring until the genre’s demise in the seventies.”

In addition to Battle Cry (published from 1955 to 1970, for a total of more than 110 issues, according to Devine’s Guide), the men’s pulp mags published by Stanley Morse’s companies Stanley Publications and Normandy Associates included: 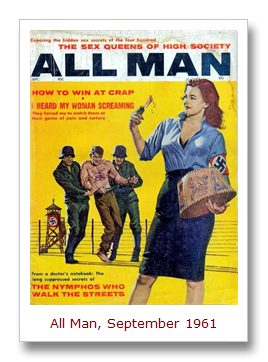 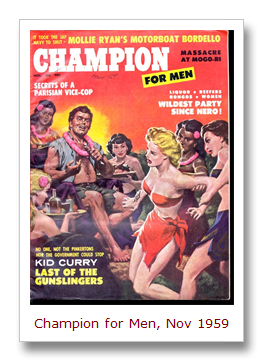 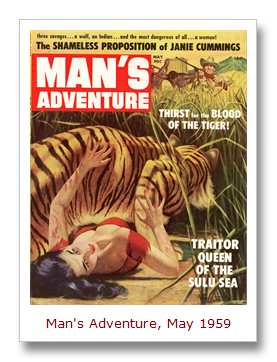 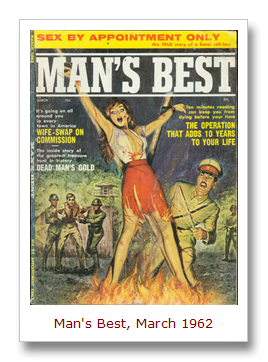 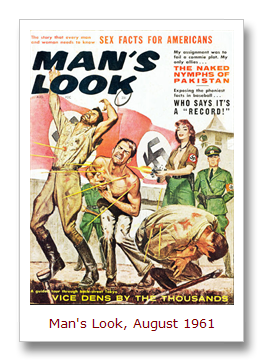 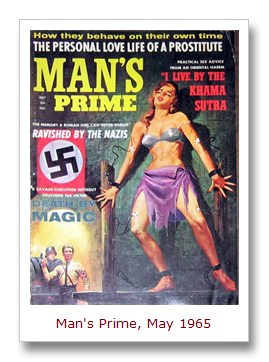 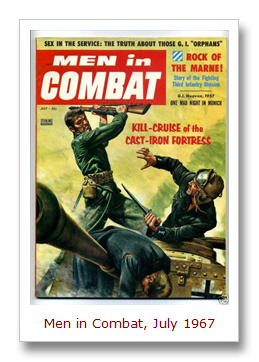 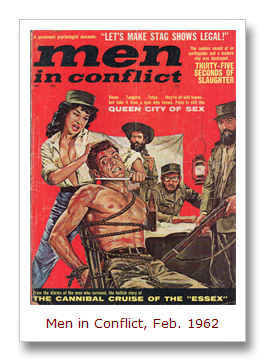 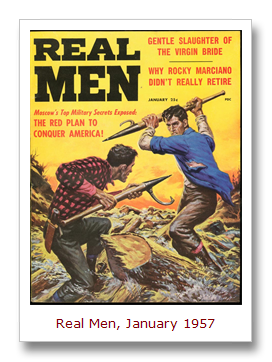 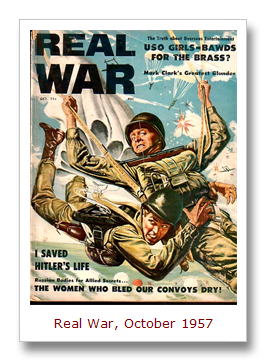 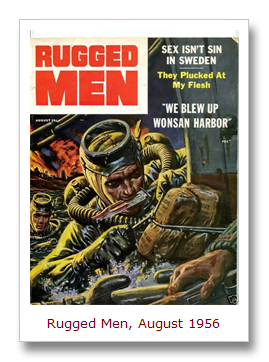 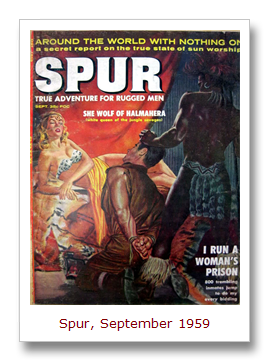 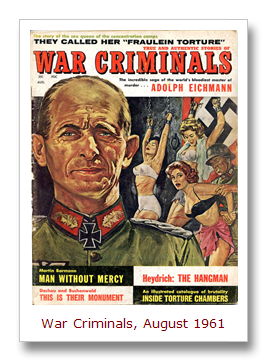 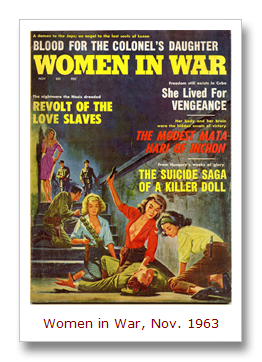 On a personal level, I got even with the Puritanical psychiatrist Fredric Wertham by continuing to be fan of the pre-Code comics, Mad and men’s adventure magazines — and by writing this blog.

Wertham died in 1981, after continuing his crusade for censorship by warning America about the dangers of sex and violence on TV and in the movies.

He probably wasn’t a fan of men’s pulp magazines either. If he saw my blog, I suspect he wouldn’t approve. I’d consider that a badge of honor.