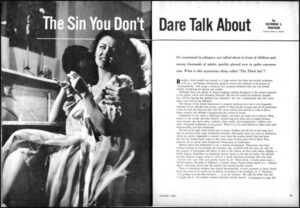 American males who read the men’s pulp adventure magazines published in the 1950s, 1960s and 1970s seem to have had a special fascination with lesbians that editors were happy to accommodate.

You can find hundreds of sex exposé articles about “nymphos” and hundreds of fiction stories featuring them in vintage men’s pulp mags. (Examples noted in previous posts here include “The Nympho Next Door” and “The Man Killing Nymphos of Bali.”)

However, I have run across quite a few purportedly nonfiction articles and some fiction yarns about lesbians in my magazine collection.

As I’ve read them, I’ve noticed that the way lesbians were viewed and portrayed evolved over time. 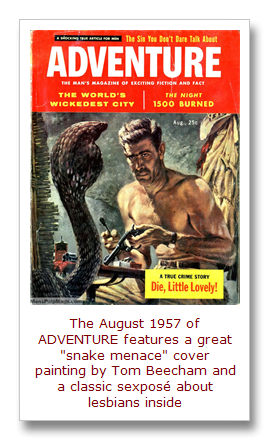 Most “nonfiction” articles in issues from the uptight Fifties and early Sixties depicted female  homosexuals (and gay men) as perverse and depraved.

Lesbians in fiction stories from those years were typically either sadistic villains or poor misguided babes who just needed to be converted by some manly man.

During the Swinging mid- to late Sixties, homosexuality was still usually portrayed as an aberration. But the viewpoints of some stories were a bit less hysterical and condemning than in previous years.

Some were even sympathetic or almost accepting. There were articles like “Is Lesbianism a Cure for Frigidity?” (REAL MEN, April 1964) and “The Big Lesbian Boom — And What’s Behind It” (MAN TO MAN, March 1965).

There are some old-fashioned sexposé style stories about lesbians in the men’s pulp mags published in the Seventies. But as many or more are oriented toward being titillating or instructional rather than judgmental or shocking, like the informative classic “How Lesbians Make Love — What ‘Normal’ Men and Women Can Learn from Them” (MEN, December 1971). 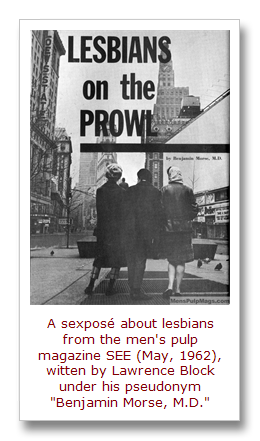 To get a better sense of this evolution, let’s start with a closer look at two stories from the Fifties.

First up is “The Sin You Don’t Dare Talk About” from the August 1957 issue of ADVENTURE (which features a terrific “snake menace” cover painting by artist Thomas Beecham).

I think it’s fascinating from a cultural history perspective, though unfortunately there’s no good, sleazy pulp art in it.

It’s illustrated with a single posed photo showing a woman who seems annoyed by some guy’s attempt to grope her. (Obviously, she has lesbian tendencies.)

I couldn’t find any info about the author, Raymond S. Traffarn. It may be a pseudonym.

Pen names were commonly used for sex-oriented exposé articles in men’s adventure magazines. The only examples of work under that name I found are a couple of other exposé articles published in ADVENTURE in 1956 and 1957.

If it is a pen name, this writer did not adopt the practice of calling himself an M.D. or a psychologist, as the writers of some Kinsey-like “sexology” pieces did. 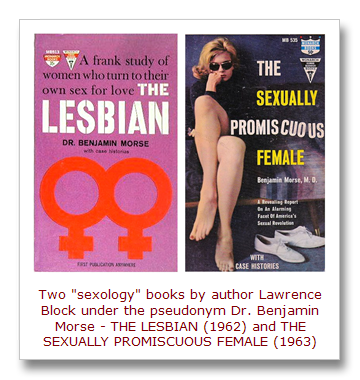 Two well-known authors who did use pen names and phony medical titles for such articles early in their careers are Lawrence Block, who became a best-selling novelist, and Robert Silverberg, who is best known for his science fiction work.

In the 1960s, Block wrote a number of men’s adventure magazine articles and even entire sexology-style “nonfiction” paperback books under the pen name “Dr. Benjamin Morse.”

Writer Robert Silverberg did the same under the name “L.T. Woodward, M.D.”

Raymond S. Traffarn apparently wasn’t a doctor and didn’t pose as one. But in “The Sin You Don’t Dare Talk About” he does cite real-life experts, including Dr. Alfred Kinsey, and some studies that are not make-believe, such as the pioneering pre-Kinsey study of college girls conducted by Katherine B. Davis.

Traffarn picked the factoids he plucked from various sources to help make his clearly negative case about “Lesbianism.”

His first horrifying revelation is designed to send a chill down the backs of any man who harbored secret fears about the sexual proclivities of his wife:

“The menace of the female homosexual is uniquely insidious, since she is very frequently feminine in her attitudes and actions, capable of deceiving the average man and of pretending a love for him she does not feel. And the active Lesbian who marries in order to have a home, security, and children is perpetrating the cruelest of frauds.”

Traffarn then cites “disturbing evidence that female homosexuality is more prevalent in these United States than most of us would care to believe.”

According to the sexologist, G. V. Hamilton, “it is perhaps true that this inversion … is on the increase.” He adds his belief that this is largely due to “the modern woman’s heretical attitude toward society’s traditional sex morals.”

The article further stokes the fear men had of the nascent women’s liberation movement by saying:

There is another factor, too. This is the increasing “masculinization” of women. There are few occupations today in which women are not found; they work side by side with men, work the same hours, compete with men for jobs. The sexual “double standard” is no more; women are demanding the same “freedoms” as men and showing an aggressiveness that was once considered unwomanly.

Obviously, according to the article, that trend was not only bad for our society but fundamentally against nature. And, any woman who violates this principle of nature is probably a lesbian. Traffarn tells us:

Among emotionally mature humans, the male is designed by Nature to be the aggressor and leader. A normal man, according to the sociologist Alex Driekston, desires a woman “who will be his partner, but in every partnership, one person is the leader…The man is the hunter, the pursuer, the provider, the aggressor…To defend himself, the man must demand to be the deciding factor in all relationships. He must determine where he and his date shall spend the evening. He must decide where his family shall live. He must decide how social hours will be spent. He must control the family budget and problems of the home.” Thus, aggressiveness not only indicates masculinity but is also a clue to the woman who may possess Lesbian traits of a masculine nature.

Traffarn’s article goes on to provide more helpful tips on how to spot a lesbian that I personally found quite funny and entertaining to read. It also provides some interesting insights into mid-Twentieth Century American culture. (If you’d like to read the entire article, you can download a high-resolution PDF copy of the August 1957 issue of ADVENTURE in my Payloadz store.) 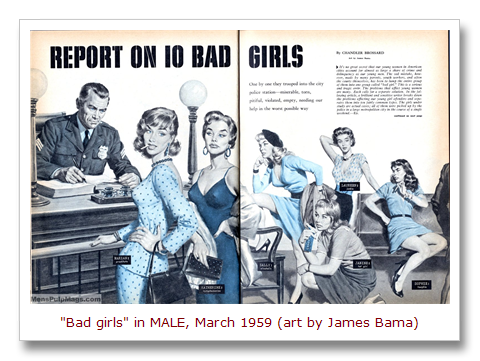 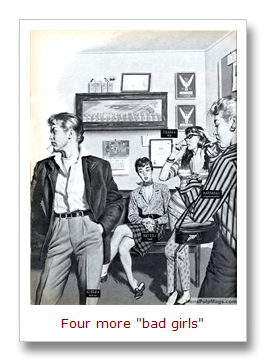 The story “Report on 10 Bad Girls” from the March 1958 issue of MALE, gives another glimpse of how lesbians were portrayed in men’s adventure magazines in the Fifties.

It was written by Chandler Brossard, an American writer, editor and teacher whose books are better known in Europe than here. 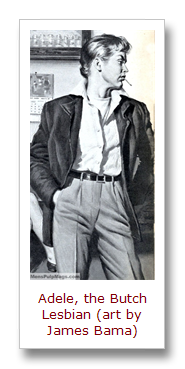 One “bad girl” is a lesbian. She gets lumped in with other misfits and criminals, including a nymphomaniac (of course), a prostitute, an alcoholic, a junkie, a gang member and a kleptomaniac. Brossard sums her up thusly:

Adele insists that her first name is Leslie or Les and not Adele. “And don’t call me anything else, you dirty rats.” She said she adopted this name when she was ten years old and nobody since has called her Adele. She is now 19. When she was arrested as a participant in an all girl barroom brawl in Greenwich Village, she was wearing men’s clothes. According to witnesses, the fight started when Adele, or “Les,” made a pass at another girl’s girlfriend. In her world. Adele is known as a “Butch,” that is, the male member of a homosexual team — aggressive, domineering, and troublesome. The girl she made a pass at was a “Mary,” or the passive member, who dressed like a girl. The bar is a notorious lesbian, or “dike ,” bar and has twice been raided…
She was twice picked up by vice squad members for loitering in parks for the purpose of homosexual pickups. She spent three months in the Women’s Reformatory on the last pick up. This was the result mainly of the violent and abusive time she gave to the arresting officers. She has been living with two other lesbians in Greenwich Village, one of whom is a Mary and who supports the other two from her pay as an advertising secretary.
Since none of the girls involved in the Village fight will press charges — “I’ll kill any louse who squeals on me!” — it is doubtful if Adele will get a stiff sentence. She has two distant relatives in New York who might be interested in her and who might take her to live with them.

I sure hope things turned out OK for poor Adele/Les. But, alas, it doesn’t seem likely, since lesbians like her are inherently just “bad girls.” Right?

Coming up in the next post: a closer look at some stories about lesbians from men’s adventure magazines published in the 1960s.

[Here are links to Part 2, and Part 3 and Part 4 in this series about “Lesbians in Men’s Adventure Magazines]