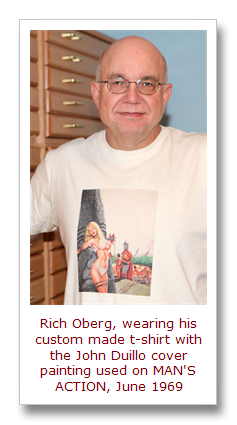 Recently, I had the great pleasure of visiting men’s adventure magazine art expert and collector Rich Oberg at his home in Tennessee.

That lushly-illustrated overview of the men’s adventure genre was first published in softcover format in 2004, then reprinted in a hardcover edition in 2008.

As I’ve mentioned in previous posts, the now out-of-print 2004 softcover edition of the Taschen book, with the “scorpion torture” cover, is larger in size than the current 2008 hardback, which features a “snake menace” scene on the cover.

The 2004 edition also includes some chapters and illustrations that were left out of the 2008 edition. (Most notably missing are vintage magazine and comic expert George Hagenauer’s fascinating interview with artist Norm Eastman, the grand master of the politically incorrect Nazi bondage and torture cover paintings and a chapter showing many covers in that outré subgenre.) 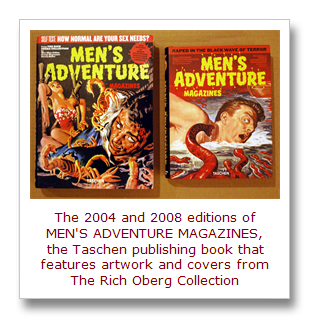 So, my recommendation to men’s pulp mag fans is to buy both the current hardcover version and the increasingly hard-to-find 2004 edition, if you can find a used copy on Amazon or elsewhere.

A couple of years ago, not long after I created MensPulpMags.com, Rich Oberg noticed it and contacted me by email.

I emailed back and asked him to do an interview with me by phone.

He graciously agreed. And, during the course of our initial conversations we discovered that we had a lot of things in common in addition to a passion for men’s adventure magazines and pulp art.

Rich soon became my men’s pulp art mentor. He also became my collaborator on this blog and the Men’s Adventure Magazine Facebook group associated with it, as well as on projects like the recent article we created about men’s pulp mags for HORRORHOUND magazine.

It’s always fun to get new images from Rich to post here on the blog and to see him drop by to make comments or post photos of the artwork he owns in our Facebook group. (Below are a few of the terrific Walter Popp paintings Rich posted there last week, while he was on vacation.) 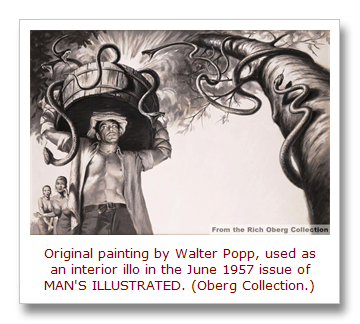 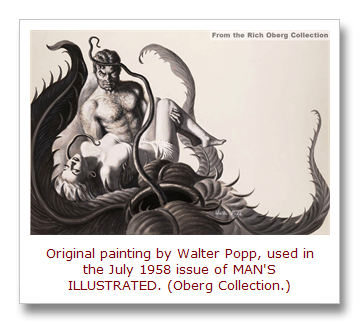 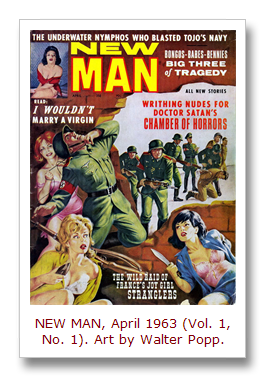 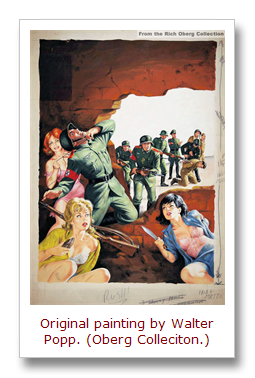 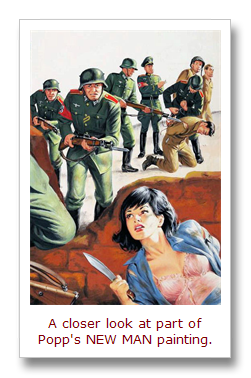 Since our first contact, Rich and I have come to view each other as good friends — though until recently our contact was all by phone and email.

Then a few weeks ago, by chance, I had an excuse to be in Memphis, not far from where Rich lives. He invited me to stay at his house for the night. 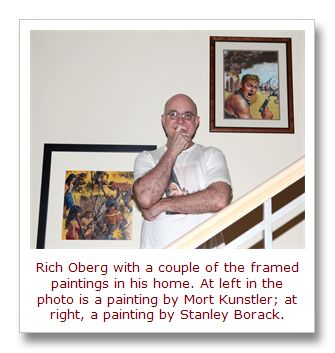 Thus, finally, we got to meet face to face, and I got a first-hand look at his huge, amazing collection of men’s adventure artwork and magazines.

More precisely, I got a look at part of his collection. In one visit, I only had time to see a portion of the hundreds of original paintings and thousands of magazines Rich owns.

Rich has what is literally the world’s largest collection of the original artwork used as cover paintings and interior illustrations by the men’s adventure magazines published in the 1950s, 1960s and early 1970s.

He also has the world’s largest — and probably the only near complete — collection of the magazines themselves.

There are jaw-droppingly cool, framed paintings by famous men’s adventure artists hanging on almost every wall of his large brick home, where he lives with his beautiful fiancée Holly.

But Rich keeps most of his treasures in what he calls his “art room.” As we entered the room, Rich said something that I’m pretty sure nobody else in the world could say: “I have over 700 paintings here by over 50 different men’s adventure magazine artists. Whose stuff do you want to see first? Norm Eastman? Mort Kunstler? Norman Saunders? Basil Gogos? Someone else?”

After I got over the shock of realizing just how much men’s pulp art there was in Rich’s “art room,” we spent hours going through the drawers, looking at paintings by famous and lesser-known artists who worked for men’s adventure magazines.

We started with some of the artists Rich knew were among my favorites: Eastman, Kunstler, Saunders, Gogos, Gil Cohen and Bruce Minney.

I was, in a word, awed. I was seeing original artwork used on the covers and inside pages of hundreds of the men’s pulp mags I love. And, yes, the paintings are even cooler than they appear in photographs published online or in books.

I also got to see rarities like photos Rich took of Norm Eastman and his wife Jane when he visited them at their home in Lompoc, California, a few years before Norm died in 2007.

Some of the photos show Norm working to recreate several long lost cover paintings as a special favor to Rich, such as the wild, iconic Nazi bondage and torture scene used on the February 1966 issue of MAN’S STORY. 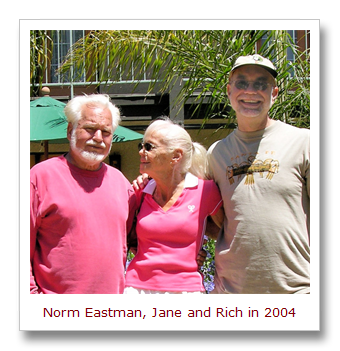 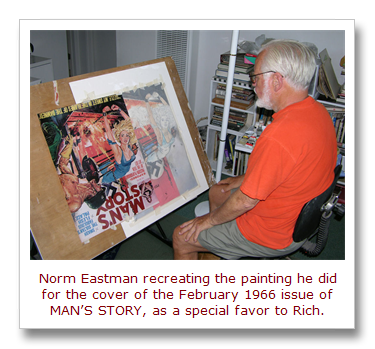 By the time I went to bed, my mind was completely blown.

I had seen a treasure trove of men’s adventure paintings that few people had ever seen in real life, other than the artists who did them, the art directors and editors at the magazines they were used in and, years later, a handful of collectors who owned them before Rich. 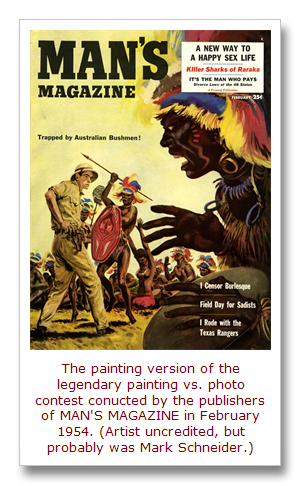 Amazingly, there has never been a major museum show of men’s adventure art, like there has been for earlier pulp digest magazine cover paintings. And, only a small percentage of the artwork Rich Oberg owns has been shown in photos published in books or online.

In fact, I think more examples of original artwork from his collection have appeared here on MensPulpMags.com and the Men’s Adventure Magazines Facebook group than anywhere else.

As a small token of thanks, when I visited Rich I gave him a t-shirt I had custom made for him via CafePress.

It features one of his favorite John Duillo cover paintings on the front and the magazine cover it was used for on the back. (MAN’S ACTION, June 1969.)

Rich reciprocated by giving me an issue of MAN’S MAGAZINE he knew I’d been searching for — the February 1954 issue, featuring an exotic adventure painting that helped create the men’s adventure magazine genre. (The artist is uncredited, but Rich told me he’s 99% sure it was done by artist Mark Schneider.)

It was part of a legendary cover painting vs. cover photo market test. 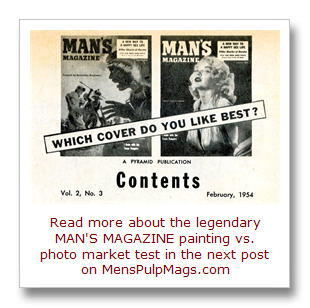 I’d first read about it in another great book that features some of the original paintings owned by Rich Oberg — IT’S A MAN’S WORLD by Adam Parfrey. (Full title: It’s a Man’s World: Men’s Adventure Magazines, the Postwar Pulps.)

For this seminal market test, half of the February 1954 copies of MAN’S that were printed had the exotic adventure painting on the cover.

I owned a copy of the photo version of that issue, but I didn’t have the hard-to-find version with the painted cover. So, getting a copy of it from Rich was another special benefit of going to visit him.

In an upcoming post, I’ll discuss how the results of MAN’S painting vs. photo market test helped determine the history of the men’s pulp mag genre.

In the meantime, if you want a t-shirt like the one that was custom made for Rich Oberg, or other items featuring classic men’s adventure art, check out my MensPulpMags store on CafePress.

Your purchases will help keep this blog alive — and give you some things to wear or show off that I’ll bet nobody else in your neighborhood has.