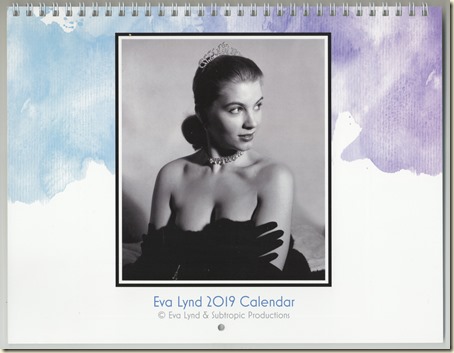 In recent years, I’ve had the pleasure of becoming friends with actress model Eva Lynd.

I started writing posts about her on this blog before I met her several years ago, when I learned that she was a favorite model of Al Rossi and Norm Eastman, two of the great artists who did illustration art for the men’s adventure magazines I collect and focus on here.

In this post, I’m happy to announce the Authorized 2019 Eva Lynd Calendar is now available.

By authorized, I mean it is approved by Eva and copyrighted jointly by her and my Subtropic Productions company.

The 2019 Eva Lynd Calendar is available from me on eBay, or by emailing me and arranging a PayPal payment. The price is $19.99 plus shipping.

Each page of the calendar features a photo or illustration Eva modeled for.

Several of the photographs come from Eva’s personal collection and have never been published before.

I’m showing scans of the cover and the pages for each of the 12 months in this post.

Eva Lynd served as the main female model used for dozens of men’s adventure magazine cover and interior illustrations from the late 1950s to the late ‘60s.

During that time, she was also a popular glamour girl photo model for top pinup photographers as well as an actress who appeared in (among other things) TV variety shows and dramas, the memorable “Girl in the Tube” Brylcreem commercial, the cult horror film THE HYPNOTIC EYE (1960) and other movies.

In 1958, she appeared in LIFE magazine in a story about the popular casinos in Havana, Cuba, where she worked as a showgirl for a brief time before Fidel Castro took over as that country’s dictator.

There’s a special chapter about Eva in the CUBA: SUGAR, SEX, AND SLAUGHTER, the latest men’s adventure magazine story and artwork anthology in The Men’s Adventure Library book series I co-edit with Wyatt Doyle.

The title of the chapter, which includes an exclusive interview Wyatt conducted with Eva, is “Viva, Eva!” I should note that she pronounces her name pronounced AY-va, not EE-va. But it seemed like a cool chapter title and Eva didn’t mind.

The cover of the 2019 Eva Lynd Calendar features a photo taken of her around 1958 by the legendary celebrity photographer and Beach Boys publicist Earl Leaf. You can see more photos of Eva by Earl in this previous post.

The painting shown on the page for January was done by artist Al Rossi. It was used on the cover of the 1964 edition of the steamy paperback STRANGE LOVERS, written by Dan Bartell. 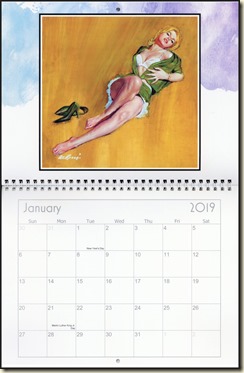 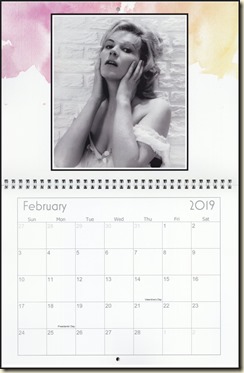 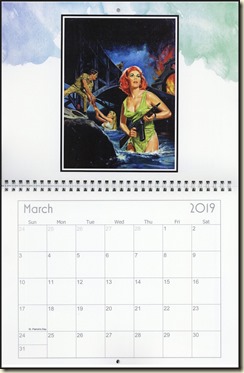 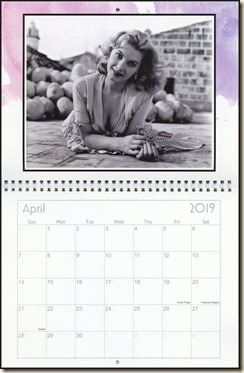 Eva also posed for many men’s adventure illustrations done by Rossi, often with the great male model Steve Holland. You can see examples, as well as reference photos of Eva and Steve taken by Rossi, by clicking this link.

The photo of Eva on the February page was taken around 1956 or 1957 by Lester L. Krauss, whose work appeared in many magazines, as well as on a long list album covers in the ‘50s and ‘60s. Photos of Eva by Krauss were used for both back in the day.

Norm Eastman was another great men’s adventure magazine and paperback artist who frequently used Eva Lynd as a model, and who also often posed her and Steve Holland together.

One of my favorite paintings Eastman did using Eva and Steve is shown on the March page of the 2019 Eva Lynd calendar. It’s a World War II scene showing Eva with red hair, toting a machine with Steve Holland and a blonde (also based on Eva) in the background.

That classic Eastman was used on the cover of the October 1966 issue of BLUEBOOK.

The photo of Eva on the April page of the calendar was taken by the legendary sculptor, photographer and playboy Sepy Dobronyi, during Eva’s time in Cuba. We show a couple of others he took of her there in the chapter about Eva in our CUBA book. 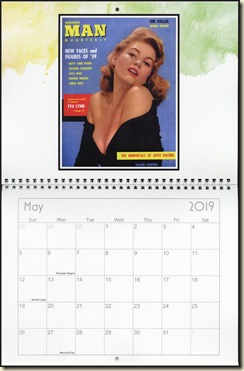 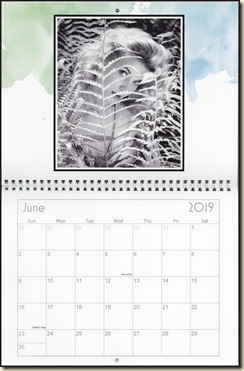 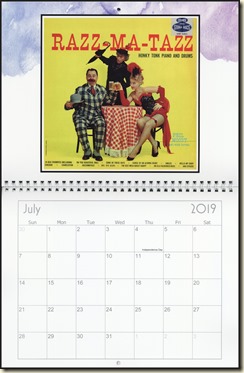 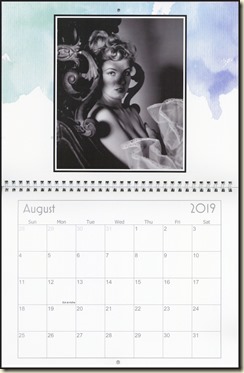 The May calendar page shows one of the covers of MODERN MAN Eva was featured on. This one the cover of MODERN MAN QUARTERLY, Spring 1959. The photo of Eva was taken by Herb Flatow, whose work appeared in scores of men’s magazines.

The calendar page for June features an arty shot of Eva peeking through ferns taken by another top pinup photographer, Charles Kell.

The July page shows one of several album covers Eva appears on. This example is the 1957 LP RAZZ-MA-TAZZ, by Phil Moody and Nick Patool. The photo is credited to Jerry Tiffany and Stan Sternbach.

The photo of Eva on the August page is by Jerry Yulsman, one of the top glamour girl photographers of the ‘50s and ‘60s. It’s from a photo session Yulsman did with Eva in 1956 or 1957. Other photos from that session appeared in the men’s bachelor magazine DUDE in March 1957 and in the March 1958 issue the men’s adventure mag REAL ADVENTURE.

The original painting featured on the September page is another classic men’s adventure mag cover painting by Norm Eastman that Eva and Steve Holland modeled for together. It was used on the cover of WORLD OF MEN, January 1969.

The October page photo of Eva with a mask is another shot taken by Lester Krauss, probably in the early ‘60s. 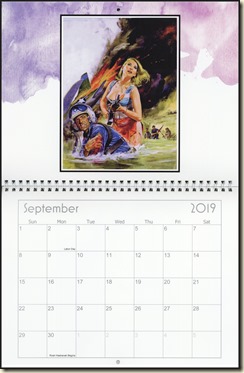 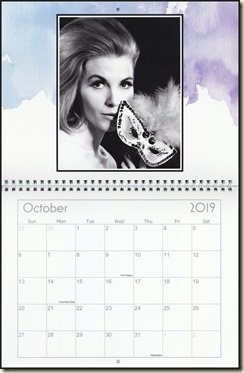 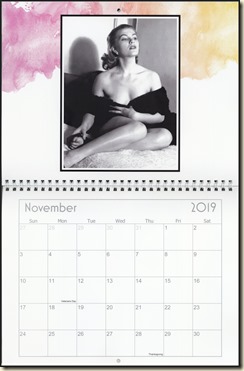 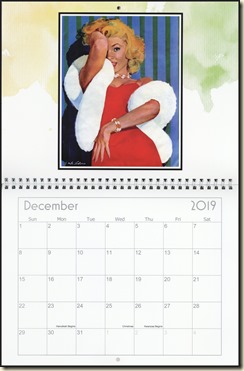 The alluring shot of Eva wearing a black fur stole on the November page is another photo taken of her by Earl Leaf, probably at his home studio in California sometime around 1958.

The gorgeous painting of Eva Lynd wearing a red dress and a white fur stole was done by artist Mike Ludlow, a top mid-20th Century illustration artist. It was used for the story “Bring Back the Bride” by Hannibal Coons in the September 7, 1957 issue of the SATURDAY EVENING POST.

If you’d like to buy a copy of the Authorized 2019 Eva Lynd Calendar, act soon. It’s a limited edition.

Thanks as always to Eva for sharing her life and archives with me. Stay tuned for some news about the next book in our Men’s Adventure Library series that will feature her.

Click this link or the image below get copies of CUBA: SUGAR, SEX, AND SLAUGHTER

THE 2020 EVA LYND CALENDAR — a collectible to go with the book EVA: MEN’S ADVENTURE SUPERMODEL…