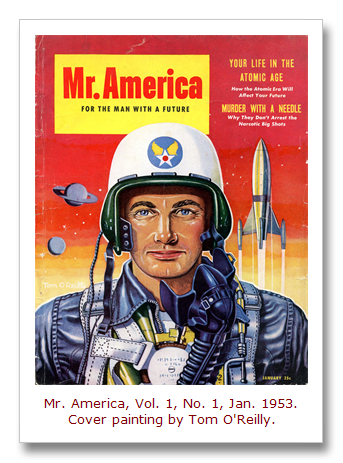 In the 1950s, when atomic bombs and nuclear power were relatively new, views about the atom were even more schizoid than they are today.

On one hand, there was constant fear that a nuclear war between the United and the Soviet Union would result in an atomic apocalypse.

On the other, there were rosy predictions that “the peaceful atom” would usher in an era when electricity was “too cheap to meter” and atomic-powered rocket ships would take us to the stars.

Both of these concepts are present in the January 1953 issue of MR. AMERICA magazine.

MR. AMERICA was one of a number of magazines published and edited by Canadian bodybuilding guru Joe Weider.

For most of it’s run, MR. AMERICA was a bodybuilding and fitness magazine. But for a brief period in 1953, it was more of a men’s adventure magazine, with some bodybuilding articles thrown in.

Starting in the mid-1930s, Joe Weider and his brother Ben — “The Brothers of Iron”

Their empire not only included bodybuilding courses, products and events, such as the International Federation of BodyBuilders’ “Mr. America Contest,” but also an impressive list of magazines put out by their company Weider Publications.

Many of the Weiders’ periodicals, such as YOUR PHYSIQUE, MUSCLE & FITNESS, FLEX, MEN’S FITNESS and SHAPE, focused on weightlifting, bodybuilding and physical fitness.

But in the 1950s and 1960s, they also published magazines oriented toward the men’s adventure market, including AMERICAN MANHOOD, MR. AMERICA, FURY, OUTDOOR ADVENTURES, SAFARI, TRUE STRANGE and TRUE WEIRD. 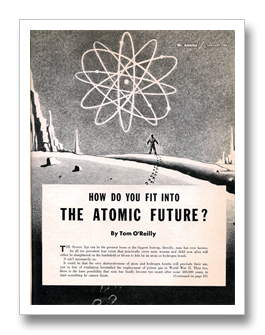 The Weiders actually published several different magazines titled MR. AMERICA over the decades. Most were for bodybuilders. But the 1953 incarnation of Mr. America was not.

Joe Weider explained his vision for the the men’s adventure style version of the magazine in his editorial introduction to the debut issue, labeled Volume 1, No. 1:

“This is the first issue of our completely revamped MR. AMERICA. It not only wears a new look, but, perhaps more important, a new outlook…

Probably nothing in the magazine characterizes the new outlook like our slogan, The Magazine For The Man With A Future, and the article, How Do You Fit Into The Atomic Future?

We do believe the young man has a future in the Atomic Age. It was largely because we became sick and tired of the wailings of the Prophets of Doom that we decided to convert Mr. America into its present form.

Without trying to emulate Pollyanna, we hope to stress the fact that the future is not hopeless. The young man of today has more to look forward to than being blown to bits in a foxhole or seared to a crisp by an atom or hydrogen bomb. Indeed, as Mr. O’Reilly points out in his article, we probably are facing the greatest age man has ever known.

While we hope to provide plenty of entertainment on these pages, our primary purpose is to help the young man of today adapt and prepare himself for the golden tomorrow we firmly believe is inevitable…

We say the world is on the verge of the happiest, most progressive era it has ever known.

We say Fie! to the Prophets of Doom — and we hope you agree with us.” 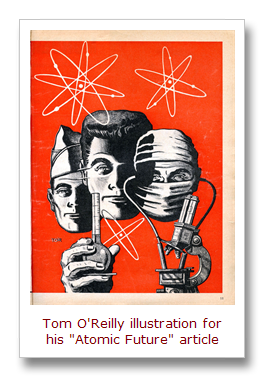 Apparently, there weren’t quite enough readers who agreed. The futuristic men’s adventure version of MR. AMERICA only lasted for six issues. But they are truly fascinating.

The “Atomic Future” story Weider mentioned was written and illustrated by Tom O’Reilly. He also created the cool rocketship pilot painting on the cover.

O’Reilly’s article (which you can download and read in it’s entirety by clicking this link) is a perfect example of the era’s schizoid views of the atom.

“The Atomic Age can be the greatest boon or the biggest bust-up, literally, man has ever known,” O’Reilly says in the article. “An all too prevalent fear exists that practically every man, woman and child now alive will either be slaughtered on the battlefield or blown to bits by an atom or hydrogen bomb. It ain’t necessarily so.”

O’Reilly goes on to describe a golden atomic future when planes, ships, cars and houses will run on atomic energy.

He predicts that space travel will be achieved with atom-powered spaceships. Cancer and other diseases will be cured with radiation treatments. He also forecasts:

“New dietary knowledge, new foods and advanced medical knowledge undoubtedly will raise the life expectancy to more than 100 years, perhaps even while some of us now living are still on this earth to witness the miracle.

In the future, foods will be raised chemically and manufactured synthetically and chemistry will advance the use of synthetics to a point where practically everything we now make of metal or wood will be made of plastics.” 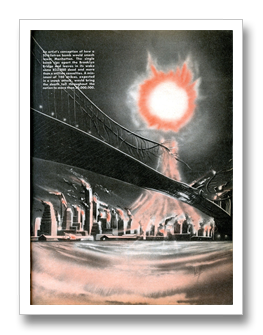 That’s the good news. O’Reilly ends the article by reminding readers of the other possible atomic future:

“All this, of course, will come about if some misguided idiot in the Kremlin or some other dictator’s aerie doesn’t push the wrong button and blow the golden atomic era to Kingdom Come before it is well started.”

The vacillation between hope and fear is reflected in other articles in the January 1953 issue of “The Magazine For The Man With A Future” (assuming he doesn’t get fried by a hydrogen bomb).

One article explains how “ANYBODY CAN BE DRAFTED” to help out with civil defense if the a-bombs or h-bombs start dropping.

It features an amazing painted duotone illustration by an artist who signed his work with the single name Wolff, showing “how a 50-kilotron [sic] bomb would smash lower Manhattan.”

The caption for Wolff’s illustration soberly explains that such a blast would “leave some 623,000 dead and more than a million casualties.”

Of course, that’s just in New York. It continues: “A minimum of 140 strikes, expected in a sneak attack, would bring the death toll throughout the nation to more than 20,000,000.”

But Mr. America magazine didn’t dwell on gloomy thoughts. Sandwiched between the atomic age articles were pulpy features and stories that were more in line with a typical men’s adventure magazine.

These include a cheesecake photo spread by “Bernard of Hollywood” (Bruno Bernard), the famous master of sexy glamour girl photos. One of babes featured is the legendary Burlesque stripper Lili St. Cyr. 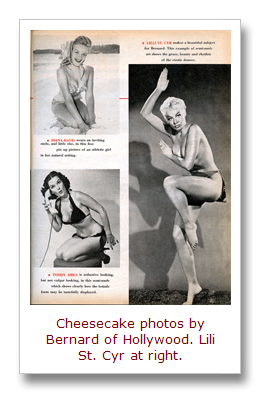 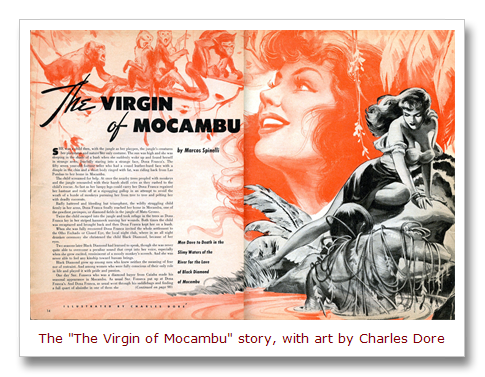 There’s an exotic adventure yarn about “The Virgin of Mocambu,” with lush artwork by Charles Dore, and an article about “Impotence in Men,” with an anxiety-laden illustration by Michael McCann.

Caidin was a prolific author of articles and books about aeronautics and aviation. He also wrote some classic science fiction novels, including Cyborg (1972), the inspiration for the Seventies TV series The Six Million Dollar Man and its spin-off, The Bionic Woman. 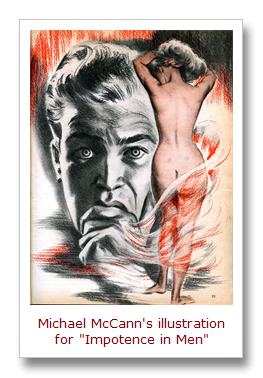 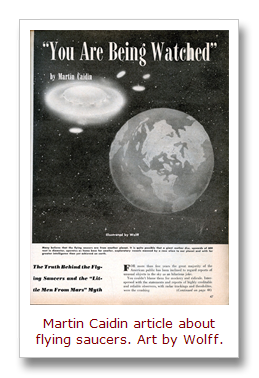 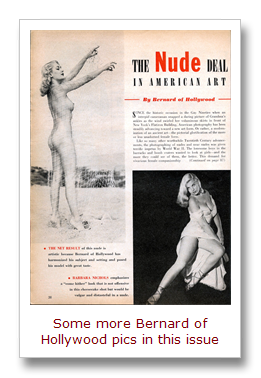 The January ‘53 issue of Mr. America also includes manly men-style articles about guns, boats, boxing and hunting, as well as absurdly sexist “Good Girl Art” cartoons and a helpful column of news items designed to give readers “Advice on Important Trends” — like “homes heated with atomic furnaces” (which were supposedly coming soon).

Altogether, this issue of Mr. America is among my favorite odd examples of the men’s pulp magazine genre.

Getting manly and “Living the Gay Life” with AMERICAN MANHOOD magazine