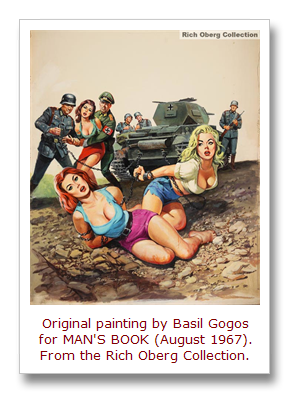 A while ago, I started a series of posts about the article that men’s pulp art and magazine collector Rich Oberg and I put together for HORRORHOUND magazine, published in the July/August 2011 issue. (Issue #30.)

The 6-page article, which gives a brief history of men’s adventure magazines and discusses the connections between that genre and the horror and fantasy genres, is very nicely illustrated.

It shows dozens of cover paintings and cover scans from Rich’s collection.

However, there wasn’t room in the piece to print captions providing the issue dates and artist information for each image. So, I decided to provide the “missing caption” info here on our blog in a series of posts, along with larger, higher resolution copies of the paintings and covers used in the article.

In case you missed it, here’s a link to the first post, about the paintings and covers shown on the first page of the article (page 44 in the magazine).

Today’s post focuses on the third page (page 46 in the HORRORHOUND issue).

That page features some classic examples from the lurid, highly controversial (and highly collectible) Nazi bondage and torture subgenre of men’s pulp mags — the subgenre that helped generate the term “sweat magazines.”

The cover paintings shown are by three of the best known artists whose work appeared regularly on and in men’s adventure magazines in the 1950s, 1960s and 1970s: Basil Gogos, Norm Eastman and Norman Saunders. 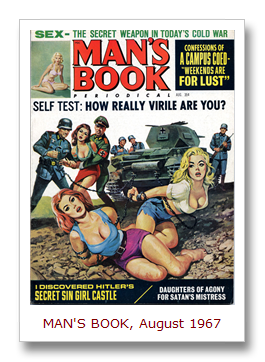 Going clockwise from the top left, the first image is a photo of the original painting used on the cover of the August 1967 issue of MAN’S BOOK.

It was painted by Basil Gogos.

As you may know if you’re a fan of illustration art, Gogos is most widely known for the cool monster paintings he created for horror magazines like FAMOUS MONSTERS OF FILMLAND, CREEPY and EERIE. 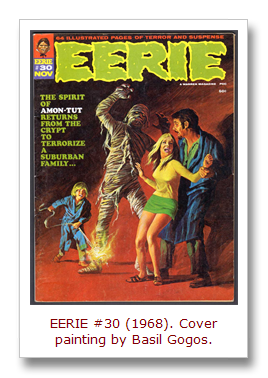 The painting used on the cover of EERIE #30 (1968), shown at the bottom right hand corner of our HORRORHOUND article, is a classic example.

The best overview of Basil’s monster artwork can be found in the excellent book by Kerry Gammill and J. David Spurlock, FAMOUS MONSTER MOVIE ART OF BASIL GOGOS.

It also includes a couple of very interesting chapters about the work Gogos did for men’s pulp mags.

In fact, Gogos probably did as many or more cover paintings and interior illustrations for men’s adventure magazines than he did for horror mags.

You can find many examples of his men’s pulp art in previous posts on this blog. (I’m particularly fond of the “Good Girl Art” cover paintings he did for the genre.)

The next two paintings and covers on the third page of our HORRORHOUND article are by the artist that’s most commonly associated with the infamous Nazi cover subgenre, Norm Eastman. 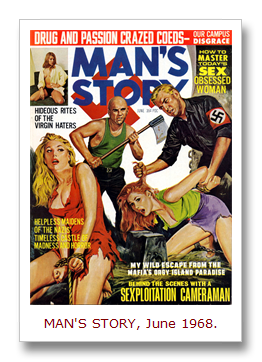 The first image is the cover of the June 1968 issue of MAN’S STORY.

Next to the cover scan is a photo of Eastman’s original painting.

The cover painting goes with the story inside “HELPLESS MAIDENS OF THE NAZIS’ TIMELESS CASTLE OF MADNESS AND HORROR.”

However, in my imagination, they could also have been used for some of the other gonzo stories in this issue, such as “DRUG AND PASSION CRAZED COEDS – OUR CAMPUS DISGRACE” or “HOW TO MASTER TODAY’S SEX OBSESSED WOMAN” or “BEHIND THE SCENES WITH A SEXPLOITATION CAMERAMAN.” 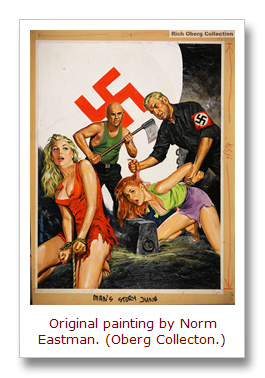 During my recent trip to Rich Oberg’s home in Tennessee, I was awed by the number of highly-valuable Eastman paintings he owns.

It was also cool to see the rare photos of Norm that Rich took when he visited the artist in 2003 and 2004 (like those I showed in my previous post about Rich’s collection).

The next cover on the third page of the HORRORHOUND article features one of most over-the-top and gruesome cover paintings Eastman ever created. (Which is saying a lot.)

It shows a crazed Nazi doctor, dubbed “DOKTOR HORROR” in the story’s title, preparing to saw off the right arm of a gorgeous blonde who’s dressed like a lingerie model.

She is shackled to an “operating table” covered with a blazing red sheet that helps show off her scantily-clad body.

Herr Doktor (whose face is modeled on Eastman’s own) is apparently doing an evil experiment that involves replacing the woman’s arm with the arm of the understandably unhappy gorilla in the background. 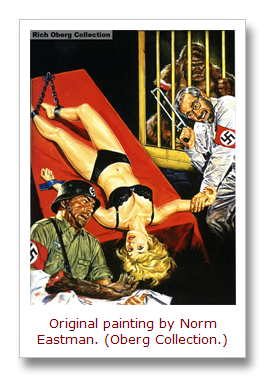 The ape’s severed arm is being brought to the demented doc by the Nazi soldier in the foreground.

This nightmarish painting was used on the cover of the September 1964 issue MAN’S STORY.

During his career, Eastman actually did many different types of scenes for men’s pulp mags, for other magazines and for paperback books (including romance novel covers for Harlequin).

But he probably did more outré Nazi bondage and torture cover paintings than anyone else.

Ironically, he did the majority of them for “sweat mags” published by two Jewish publishing entrepreneurs, B. R. “Bud” Ampolsk and Maurice Rosenfield (sometimes spelled Rosenfeld).

Their publishing companies, Reese and EmTee, put out some of the most lurid men’s adventure magazines, such as MAN’S BOOK, MAN’S EPIC, MAN’S STORY, MEN TODAY, NEW MAN and WORLD OF MEN.

Eastman once discussed his work for Ampolsk and Rosenfield in a rare interview that was published in the original 2004 edition of the Taschen book MEN’S ADVENTURE MAGAZINES (the soft cover edition with the scorpion attack cover).

Unfortunately, that interview, with comics and magazine art expert George Hagenauer, is missing from the 2008 edition of the book (the hard cover edition with the snake attack cover). 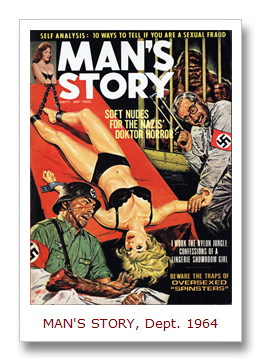 Eastman told Hagenauer that he started working for Ampolsk and Rosenfield (spelled as Rosenfeld by Hagenauer) around 1959.

“I sort of stumbled…into Reese,” Eastman recalled, “which was just starting a new men’s adventure magazine. I was under contract there for a long time. The editor was Bud Ampolsk and it was owned by Maurice Rosenfeld.

They both lived in a Jewish neighborhood in midtown Manhattan. Ben Harvey was the art director — he was just learning when I came along. Ampolsk was a very relaxed guy. Rosenfeld was also a nice guy. They gave me the feeling that you weren’t really doing these dirty little books.

Ampolsk once told me in all seriousness that we had never done anything that the Nazis hadn’t actually done. They were all detailed in files in Washington somewhere.

I don’t know if he was fibbing to make me continue doing the covers or what, but it did make me feel a little better about doing them…I never saw the story before I illustrated it. Ampolsk was the idea man on the covers, so he looked after getting the stories written after we had settled on a cover image.” 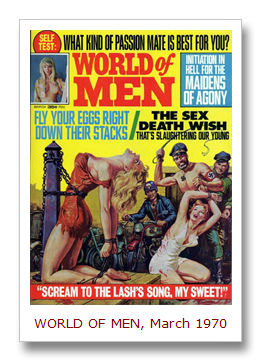 At the bottom left of the third page of the HORRORHOUND article is a Nazi B&T painting by Norman Saunders, one of the greatest pulp artists of the 20th Century.

Saunders gained his initial fame as an illustrator doing cover art for all-fiction digest pulp magazines in the 1930s and 1940s. 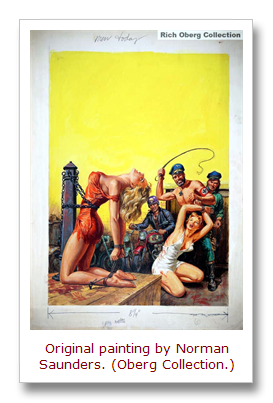 After the those pulps faded away in the 1950s, he painted hundreds of covers and interior illos for men’s postwar pulp adventure magazines. He also did many paperback book covers.

And, of course, among science fiction fans, he’s famous for the cool paintings he created for the Mars Attacks trading cards published by Topps in the early 1960s.

The Saunders painting shown here was used on the cover of the March 1970 issue of WORLD OF MEN.

It goes with the story inside titled “SCREAM TO THE LASH’S SONG, MY SWEET.” (Or was it “WHAT KIND OF PASSION MATE IS BEST FOR YOU”? Nah, just kidding.)

There are many examples of his artwork from various decades on the awesome Norman Saunders website, maintained by his son David Saunders.

That book and Gammill and Spurlock’s the book about Basil Gogos are must-haves for fans of vintage illustration art, along with the Taschen book that features Rich Oberg’s collection.

Coming soon: part one of an interview Bruce Minney, one of the top men’s adventure magazine artists. He’