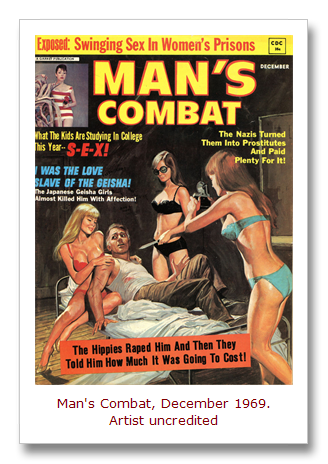 Yep, I said – “The Hippies Raped Him And Then They Told Him How Much It Was Going to Cost!”

That’s an actual headline from a men’s adventure magazine. It’s featured on the cover of the December 1969 issue of Man’s Combat.

The December issue is one of the few issues of this magazine that were published.

By that time, American society had changed greatly since the men’s pulp magazine genre was first developed in the latter half of the 1940s.

In 1969, the World War II veterans who were the initial core audience for men’s adventure mags were much older. They also had new entertainment options, like TV. In addition, men’s adventure publications faced increasingly overwhelming competition from the more sexually explicit girlie magazines, like Playboy and Penthouse.

By the mid-1970s, the combination of these factors caused the men’s pulp magazines to either go out of business or adapt and change to survive. Apparently, the adaptations embodied in Man’s Combat were not a successful Darwinian adaptation.

I guess it was a bit hard to find a huge readership for stories like “The Hippies Raped Him And Then They Told Him How Much It Was Going to Cost!” Personally, I think that headline itself would’ve been worth the 35 cent price. And, it would have been a sound investment, since a good-quality copy of Man’s Combat can now go for a thousand times that price on eBay.

The December issue of Man’s Combat also includes a pulp sleaze gem about a captured U.S. flyboy in World War II who gets whipped by Geisha girls – and then “raped.” (You just can’t trust those evil Hippies and Geishas.) It’s a supposedly first person account subtly titled “S-E-X! I Was the Love Slave of the Geisha!” 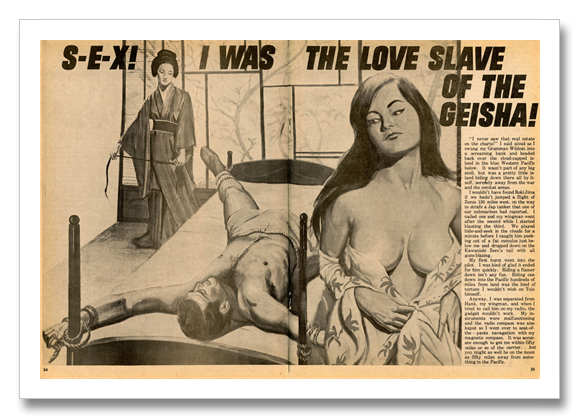 On the contents page of the magazine, there’s also a warm and fuzzy subtitle for the story: “They whipped him. tortured him, and almost loved him to death!” 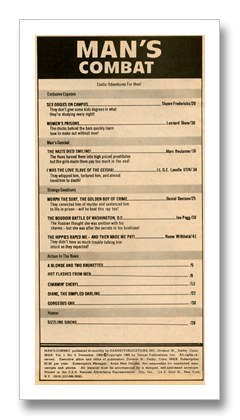 In case you’re wondering what other pieces of fine literature were included in the issue, a scan of the table of contents is shown at left.

“Exclusive Exposes” (sex on campus and in women’s prisons);

“Strange Sensations” (where our rape-happy hippies were located); and

Last and perhaps least came the “Humor” section, which consisted of a page of really lame, badly drawn cartoons. This was apparently the Man’s Combat Grade-Z version of the “Good Girl Art” (GGA) cartoons that artists like Bill Wenzel did for men’s magazines.

Of course, despite it all, as a fan of men’s adventure magazines, I am happy to have one of the few issues of Man’s Combat in my collection.

A man’s gotta have a hobby.