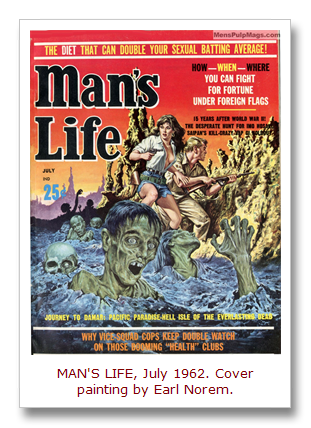 In the cover painting, bodies that look like decaying green zombies are coming out of the water near an island made of strange, towering outcrops of rock.

On the shore, looking alarmed but ready to kick ass, is a pistol-packing babe who has conveniently popped all the buttons on her blouse.

Next to her is a square-jawed blonde hero toting what appears to be an M-14 rifle.

When I got the mag, I looked to see if there was a credit for the cover painting.

But I was pretty sure it was done by the great illustration artist Earl Norem.

That ID was later confirmed for me by Rich Oberg — the world’s foremost collector of art from men’s adventure magazines. (It’s his collection of magazines and original artwork that’s featured in the Taschen book book MEN’S ADVENTURE MAGAZINES.)

From the mid-1950s to the mid-1970s, Earl Norem created hundreds of cover paintings and interior illustrations for men’s adventure mags.

He also did cover art for paperbacks and illustrations for for many general interest magazines. But he’s probably best known for his comic book cover art, especially the covers he did for Marvel’s Savage Sword of Conan series. 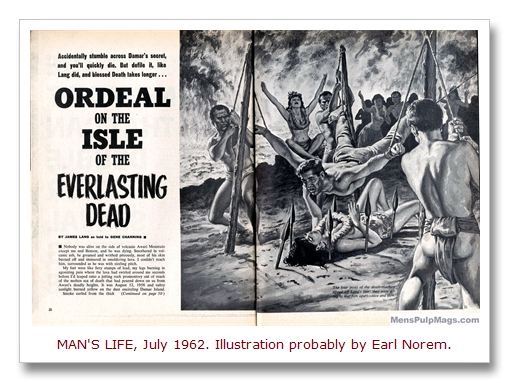 Norem’s cover painting for the July 1962 issue of MAN’S LIFE goes with a story that’s promoted on the cover as “JOURNEY TO DAMAR: PACIFIC PARADISE-HELL ISLE OF THE EVERLASTING DEAD.”

The title used inside (along with a wild exotic bondage and torture illustration that also looks like Norem artwork) is “ORDEAL ON THE ISLE OF THE EVERLASTING DEAD.”

Those definitely sound like titles for a zombie story. But in fact the “the everlasting dead” in the story are not “living dead.”

They’re the bodies of unfortunate victims of a South Seas tribe that likes to preserve bodies of the sacrificial victims they use in their tribal ceremonies.

Like many stories in men’s adventure magazines, this one is portrayed as a true, first-person account. The byline says “BY JAMES LANG as told to GENE CHANNING.”

Of course, it’s actually a piece of creative fiction written by Channing — who penned many pulpy stories for men’s magazines in the 1950s and 1960s.

Even though it isn’t a zombie story, whenever I look at Earl Norem’s cover painting for that issue I still imagine it as a scene from a George Romero movie.

In my mind, it would be a great one.