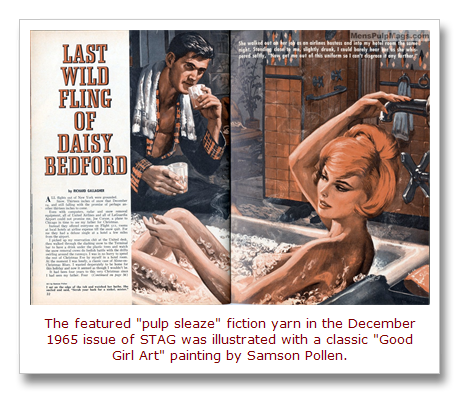 My previous post about the December 1965 issue of STAG focused on the author of its cover story about Pearl Harbor – military historian Robert F. Dorr – and on the news item with the gonzo, oh-so-Sixties “bra gun” illustration.

Of course, there are a lot of other great stories, illustrations and pulp oddities in that issue.

In fact, the mid-Sixties were great years in general for STAG and other periodicals in the “Diamond” group of men’s adventure magazines published by Atlas Magazines, Inc., Vista Publications, Inc., and other subsidiaries of Martin Goodman’s legendary company Magazine Management.

The Diamond magazines are also sometimes collectively referred to as the Atlas/Diamond group and the Magazine Management magazines.

They include STAG, MALE, MEN, FOR MEN ONLY, ACTION FOR MEN, KEN FOR MEN, MAN’S WORLD, SPORTSMAN and TRUE ACTION.

The contents pages of Diamond mags show an image of the group’s diamond-shaped logo, along with a slogan that changed over over the years, as did the list of magazines in the group. On some contents or interior pages, you often find a version of the logo that includes the titles that were in the group at the time. 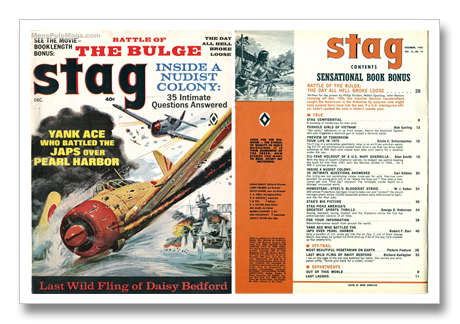 In the early 1950s, most issues of the Diamond magazines were primarily illustrated with photographs, rather than illustrations.

Illustrations became increasingly frequent in the late 1950s and were typically used for half or more of the main featured stories in each issue from then until the 1970s, when photos began to dominate again.

That’s one reason why issues of STAG and other Diamond magazines from the mid-Sixties are among my favorites.

All of the issues from that period include cover and interior illustrations by some of the best illustration artists who worked for the men’s adventure genre.

For example, in addition to the Pearl Harbor story by Bob Dorr, the December 1965 issue includes a book bonus adaptation of the screenplay for the epic film 1965 film BATTLE OF THE BULGE.

STAG’s version is actually credited to the movie’s scriptwriters, John Melson, Milton Sperling and Philip Yordan (which is unusual).

It’s about the women who fought for and against American troops. It’s further embellished with a terrific “Good Girl Art” illustration by artist Earl Norem. 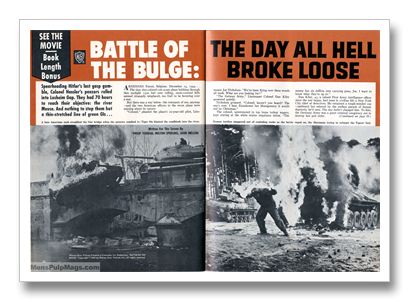 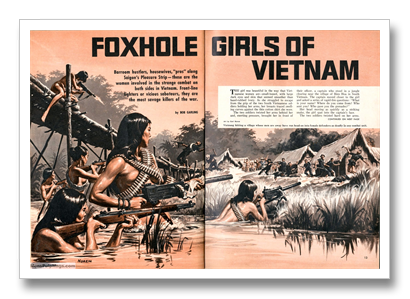 And, speaking of GGA, it doesn’t get much better than the Samson Pollen painting used for the story “LAST WILD FLING OF DAISY BEDFORD,” the issue’s featured “pulp sleaze” fiction yarn. (Shown above.)

There are two stories in this issue that have illustrations by the great Bruce Minney, who passed away earlier this year.

Under his Saber pen name, Shanahan was a prolific writer of stories for the Diamond magazines in the 1960s and 1970s and wrote at least one paperback novel, THE DEVIOUS DEFECTOR (1967). A post by Steve Lewis on his excellent Mystery File site says that Shanahan also wrote for several mystery magazines under his own name and penned a novel in “The Phantom” series created by Lee Falk. 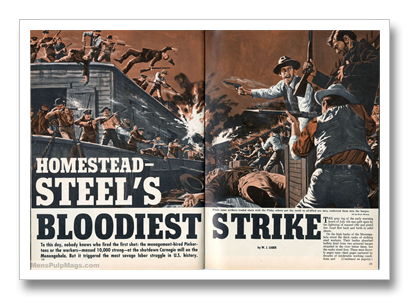 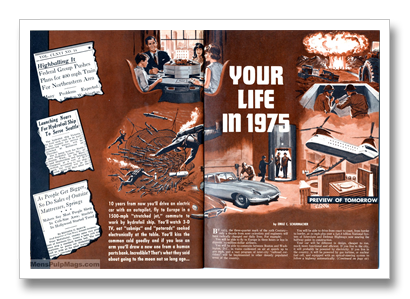 The other story in the December 1965 issue of STAG that features an illustration by Bruce Minney offers predictions of new technological marvels that would exist ten years later, in 1975. (There’s no artist credit shown in the story, but Bruce’s biographer Tom Ziegler IDed it for me.)

It was written by Emile C. Schurmacher, a prolific writer of mostly non-fiction magazine articles and books who was a frequent contributor to the Diamond magazines. The subhead for the story summarizes some of his predictions:

“10 years from now you’ll drive an electric car with an autopilot, fly to Europe in a 1500-mph ‘stretched jet,’ commute to work by hydrofoil ship. You’ll watch 3-DTV, eat ‘cabnips’ and ‘potorads’ cooked electronically at the table. You’ll kiss the common cold goodby and if you lose an arm you’ll draw a new one from a human parts bank.”

Of course, it took more than 10 years for electric cars, fast jets to Europe, hydrofoil ships, 3-D television sets, electronic microwave ovens and genetically-altered foods to become commonplace, but they are all realities today. Transplants of some human body parts are now standard procedures, though not arms. Alas, the common cold is still with us. 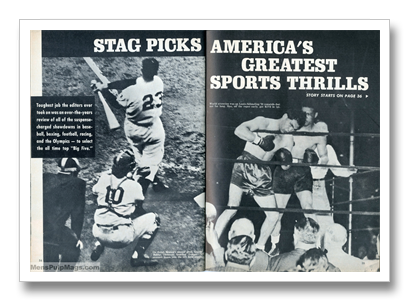 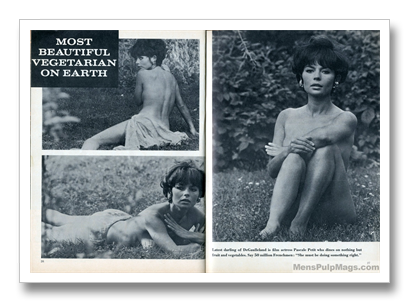 I think sports fans will be interested in this issue’s story “STAG PICKS AMERICA’S GREATEST SPORTS THRILLS,” in which the editors spotlighted what they considered to be the top five events in the history of modern sports. They chose: the Joe Louis-Max Schmeling boxing match of 1938, the 1951 baseball playoff series between the Dodgers and the Giants, the 1947 Kentucky Derby, the 1958 NFL championship game between the the Colts and the Giants, and Jesse Owens’ Gold Medal wins at the 1936 Olympics.

And, fans of classic glamour girl photography and foreign film sexpots should like the photo spread featuring Pascale Petit, a popular actress in France who starred in dozens of films. Her latest in 1965 was the Bond-style spy flick CORRIDA POUR UN ESPION, released in the US under the title CODE NAME: JAGUAR.

The December 1965 issue of STAG also contains a good example of a Sixties-style sexposé (sex expose) about the ever-popular topic of nudist colonies — plus many other smile-inducing and sometimes cringe-inducing cultural artifacts. 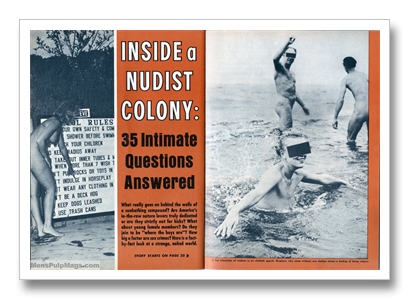 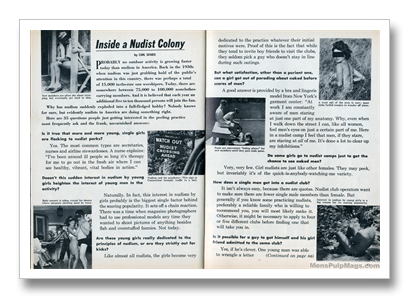 If you’d like to explore them all, you can download a complete PDF copy of this issue from the MensPulpMags.com virtual newsstand.