In my last post I featured cover art done for the magazine Untamed by Ed “Emsh” Emshwiller, who is more widely know for his great science fiction cover art.

Untamed was a short-lived men’s pulp mag published by Magnum Publications, Inc., a company owned by Irwin Stein, who also published horror and science fiction magazines and was a co-founder of Lancer Books.

The cover painting for the September ‘59 issue was done by the prolific pulp illustrator Leo Morey (1899-1965).

Morey was born in Lima, Peru. He worked as a commercial illustrator in Buenos Aires as a young man, then emigrated to the United States in 1926.

Morey’s cover for the September 1959 issue of Untamed is literally a bodice ripper. It’s for the cover story “The Lustful Bushwhackers Of Yellow Creek.” As this title and Morey’s painting suggest, those evil, bushwhackin’ varmints were both robbers and rapists. 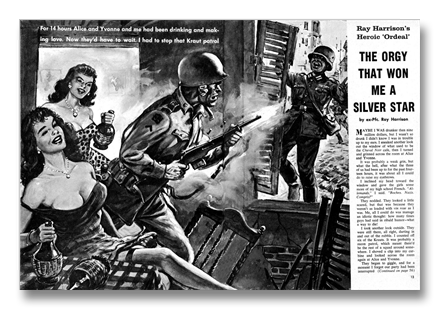 This is a purportedly true World War II story “by ex-Pfc. Ray Harrison,” who claims he got the medal for his, um, service in France. 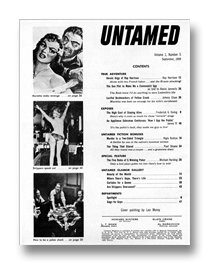 The page-spanning interior illo for Harrison’s piece is another painting by Leo Morey. Morey also did the artwork for both of the stories in the “UNTAMED FICTION BONUSES” section of this issue.

The first one — “Murder Is a Two-Sided Triangle” — was written by the famous science fiction writer Algis Budrys (1931-2008). Like many sci-fi greats of that era, Budrys also wrote stories for men’s, mystery and detective mags. His story in the September 1959 issue of Untamed is a classic noir-style piece of fiction with a totally unexpected twist in the very last sentence. The other featured “fiction bonus” in this issue of Untamed is a horror-tinged tale titled “The Thing That Stared” by Paul Sloane (which I think is a pseudonym, but don’t know who for). 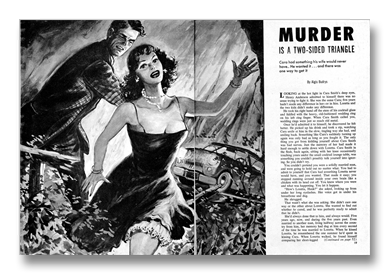 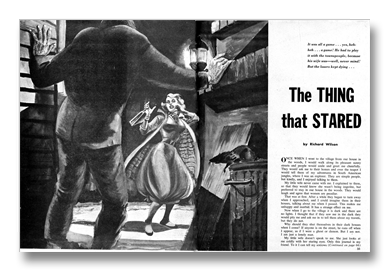 The “UNTAMED GLAMOR GALLERY” includes three fairly tame cheesecake photo spreads. But the best photos are in the piece titled “Are Strippers Oversexed?”

Several of the ladies featured in this one were top Burlesque queens back in the day, most notably: Lili St. Cyr (“The Queen of Burlesque”); the former “Our Gang” child star Shirley Jean Rickert, who went on to become the striptease artist billed as Gilda, the Golden Girl; and, Jennie Lee, “The Bazoom Girl” (aka “Miss 44 & Plenty More” and “The Biggest Bust in Burlesque”).

Here they are. (Yer welcome.)

If you click on the JPEGs above to enlarge them, you can read the answers these legendary striptease artists gave to the question “Are Strippers Oversexed?” They’re in the captions next to the photos. My favorite is the answer given by the great Lili St. Cyr (bottom left in the third page in the series). She said:

“Strippers are no more oversexed than so-called movie sexpots. We’re artists, perhaps more than they.”