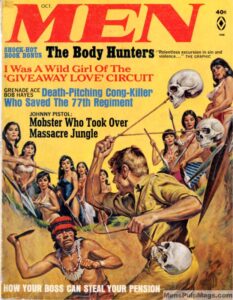 If you’ve visited the Men’s Adventure Magazines Facebook Group recently, you’ve probably noticed that there has been a steady increase in members, posts and discussions there.

My own posts in the FB group are more frequent than my blog posts. And, many other collectors and fans share cover and interior scans and information about men’s pulp mags on a regular basis.

The FB group members are a great resource when you’re trying to ID which artist did an uncredited illustration or track down some other details about a particular magazine or issue.

For example, recently I posted the rip-roaring cover shown at left in the group.

It’s the cover of the October 1967 issue of MEN magazine (a Magazine Management Diamond/Atlas mag published from August 1952 to September 1977.)

The scene on that cover shows a white guy wielding a “skull bolo” in a pit fight with a native. (Yeah, a skull bolo. How’s that for a badass weapon?)

The story, written by Tom Christopher, is about “Johnny Pistol” the “MOBSTER WHO TOOK OVER MASSACRE JUNGLE.”

The subhead blurb on the two-page spread inside notes that Johnny was “A ruthless Chicago hood” who “grabbed a vast jungle empire, turning a tribe of headhunters and their women into his slave army — until he faced the ‘Night of Vengeance.’”

The interior illustration for the story provides a glimpse of the “Night of Vengeance.” It was done by and is clearly credited to Bruce Minney, a top men’s adventure artist who now lives in Florida. (To read my recent interview with Bruce, click this link.)

Unlike the interior illo, no credit is given for the skull bolo cover painting. 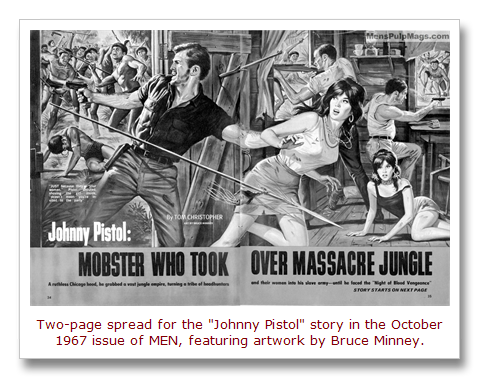 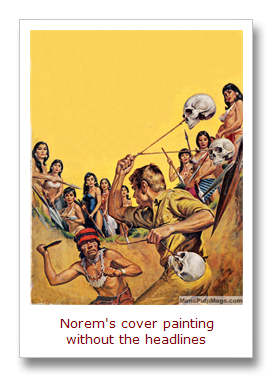 However, when I posted it in the Men’s Adventure Magazines Facebook Group, some of the knowledgeable members quickly cleared up that mystery.

Bruce Minney’s son-in-law, Tom Ziegler observed: “I don’t think this was a Minney cover. It was rare for any artist to do a cover and an interior and the women don’t look like the models he used in 1967.” 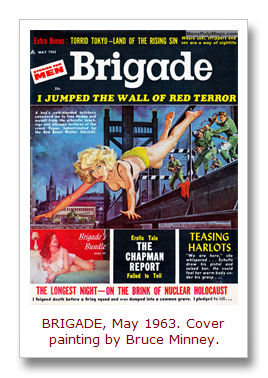 “It IS a Norem cover,” Rich wrote. “It’s one that was offered to me and I’d just bought a few and decided to pass on – and have regretted it ever since. But I do know it’s a Norem.”

Around the same time, Tom Ziegler cleared up another artist ID mystery for me, in something he posted in the Facebook Group.

Tom posted a scan of the May 1963 issue of BRIGADE magazine and noted that the cover painting was by Bruce Minney.

Since there’s no artist credit given for that cover, I had long wondered who the artist was.

In his FB post, Tom also said: “I haven’t been able to find much about this magazine. It appears to have been short lived: 1961-1963. Devine [i.e., Bill Devine, author of DEVINE’S GUIDE TO MEN’S ADVENTURE MAGAZINES] makes a passing reference to it. Is anyone familiar with it?”

I was able to fill in those blanks about BRIGADE for Tom.

In a comment on his post, I told him that BRIGADE is indeed a rare, little-known men’s pulp adventure magazine, published by an equally obscure company called Flightplan, Inc. 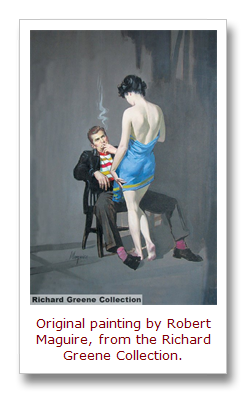 It started with a post by Richard Greene, an artist and art collector who also happens to be a friend of former men’s adventure artist Gil Cohen. (Click this link to read my interview with Gil.)

Richard uploaded a photo of a cool painting he owns by one of the grand masters of noir-flavored pulp illustration art, Robert A. Maguire.

During the last half of the 20th Century, R.A. Maguire painted more than 600 paperback covers for a long list of publishers. He also did many illustrations for vintage men’s adventure magazines, like the sexy “Leopard Woman” illo I featured here in a previous post.

If you’re a regular reader of this blog you might recognize Steve Holland as the male model in the Maguire painting Richard Greene posted in the Men’s Adventure Magazines Facebook Group, and Richard confirmed it in his comment about the piece.

“Here’s Steve Holland & Ginny Saylor in the Bob Maguire painting for the cover of Pyramid pb G489 THE NIGHT IS FOR SCREAMING by Robert Turner,” Richard wrote. “It was reproduced in the Bob Maguire book [DAMES, DOLLS, AND GUN MOLLS], mistakenly credited to Rich Harvey’s collection.”

By chance, a few days later, I ran across the same painting in the August 1961 issue of MAN’S MAGAZINE. (MAN’S was published from June 1954 to July 1975 by various subs of the Pyramid Group — first Madison Press, the Almat Publishing Corp., then Pyramid Publications Inc., and finally Hewfred Publications Inc.)

In MAN’S it was used as an interior illustration for the story “THE WAR BRIDE,” written by Paul Vialar. I posted my scan of the two-page spread for that story in the FB group, connecting another dot to Robert Maguire’s original painting. 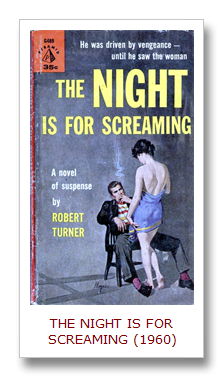 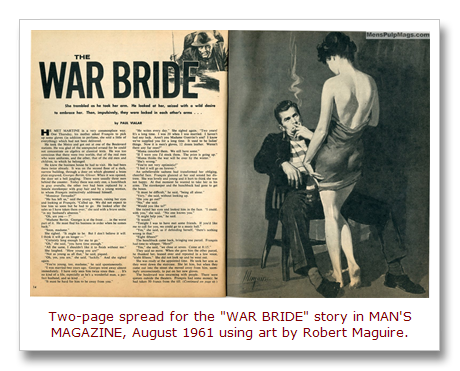 To paraphrase A-Team leader John “Hannibal” Smith, I love it when an unplanned coincidence comes together.