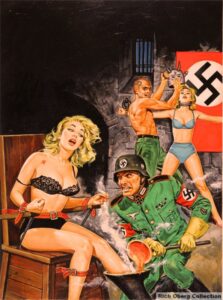 It’s only natural that many fans of the vintage men’s adventure magazines are also fans of horror mags, movies and books.

So, when I was asked to write an article about men’s pulp magazines for the excellent horror/sci-fi magazine HORRORHOUND, I was happy to comply.

My friend and collaborator Rich Oberg provided dozens of cover scans and photos of some of the original artwork he owns to illustrate the piece.

The article is six pages long — appearing on pages 44 to 49 in the magazine.

The layout, created under the direction of Aaron Crowell, Managing Editor of HORRORHOUND, turned out great. 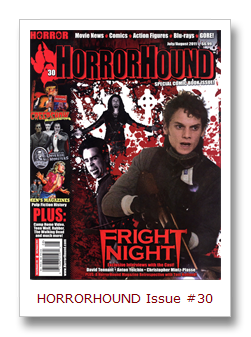 However, due to space constraints, the images had to be fairly small and there simply wasn’t room for captions noting the names and dates of the magazines.

So, every once in a while, I’ve been doing posts here that provide nice, big JPEGs of the covers and paintings shown on each page of the article, along with the “missing” caption information.

In previous posts on MensPulpMags.com, I’ve focused on Page 44, Page 45 and Page 46.

This post features the covers and paintings on page 47.

As I mentioned in the article, the most notorious — and most sought after — men’s adventure magazines are those that feature Nazi bondage and torture cover paintings, like the one shown here at top left. (In the HORRORHOUND article it’s at the bottom right corner of page 47.)

It was painted by Norm Eastman, one of the grand masters of the Nazi B&T “sweat magazine” subgenre, and was originally used on the cover of the August 1964 issue of MAN’S EPIC.

MAN’S EPIC is a classic sweat mag published by Emtee Publications, Inc. from September 1963 to October 1973 (as documented by Bill Devine in his indispensable reference work DEVINE’S GUIDE TO MEN’S ADVENTURE MAGAZINES). 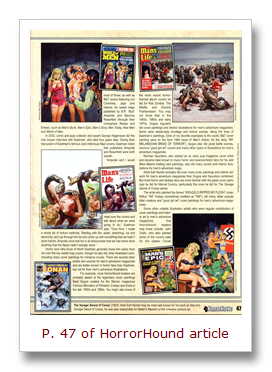 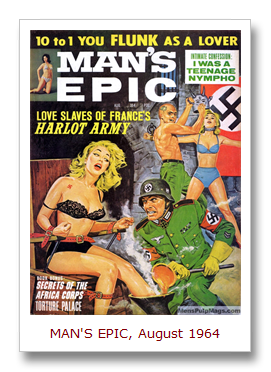 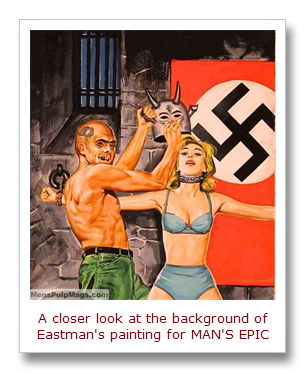 For example, most true horror fans know who Basil Gogos is because of the amazingly cool cover paintings he created for the classic Warren horror/fantasy magazines FAMOUS MONSTERS OF FILMLAND, CREEPY and EERIE in the Fifties and Sixties.

They are are the focus of the book FAMOUS MONSTER MOVIE ART OF BASIL GOGOS by Kerry Gammill, which I highly recommend.

Horror fans may also know of the more recent album covers Gogos did for Rob Zombie (who wrote the introduction to Gammill’s book) and for the bands Electric Frankenstein and The Misfits. 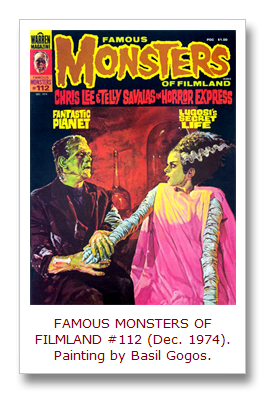 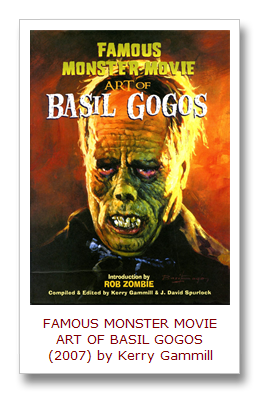 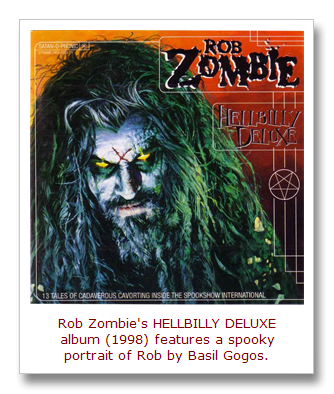 But younger horror fans may not know that in the 1950s, 1960s and early 1970s, Gogos regularly did cover paintings and interior illustrations for men’s adventure magazines.

Some were sweat mag-style bondage and torture scenes, like the one below (shown at the top left of page 47 in the HORRORHOUND article).

That painting looks like it could have been used on a poster for a Seventies slasher movie. And, it is from the same era. 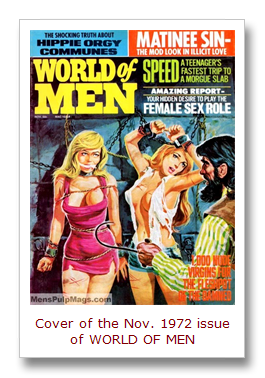 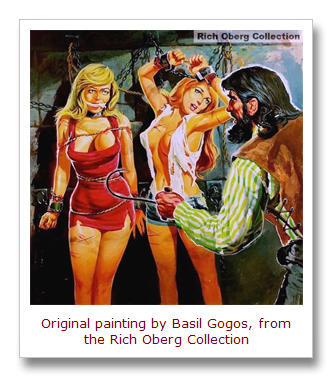 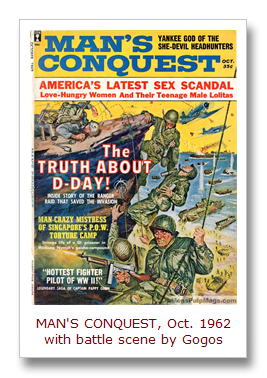 Basil Gogos also did many other types of cover paintings and interior illos for the post-WWII men’s pulp magazines.

They included some less lurid “Good Girl Art” (GGA) and everything from Western scenes to rip-roaring battles scenes, like the MAN’S CONQUEST cover shown above. (MAN’S CONQUEST ran from June 1955 to February 1972. It was published by Hanro Corp., a Sterling Group company, during it’s first decade, then by Q.M.G. Magazine Corp.) 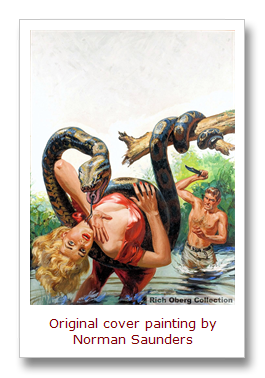 The outstanding snake attack cover painting at center left on page 47 of the HORRORHOUND article is another treasure from Rich Oberg’s collection.

It was painted by Norman Saunders and used on the cover of the July 1956 issue of MAN’S LIFE.

MAN’S LIFE was published from November 1952 to November 1974, first by Crestwood Publishing, then by Stanley Publications.

In the Fifties, MAN’S LIFE regularly featured killer creature covers. (The most famous example is the iconic “WEASELS RIPPED MY FLESH” cover.)

Norman Saunders is one of America’s greatest illustration artists.

He did many superb cover paintings for all-fiction pulp magazines published in the 1930s and 1940s. 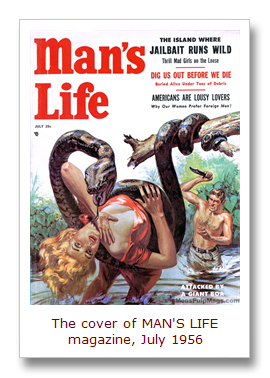 But he’s especially known to horror and science fiction fans for the wild paintings he created for the Mars Attacks trading cards published by Topps in the 1960s. (They later inspired the 1996 Tim Burton movie). If you’re a reader of this blog you probably know that, from the early 1950s to the the late 1960s, Saunders was also one of the most popular men’s adventure magazine artists.

To see an awesome gallery of his illustration art from various genres, check out the official Norman Saunders website.

It’s maintained by his son, the artist and art historian David Saunders.

David’s book about his father’s work, simply titled NORMAN SAUNDERS, is a must-have for anyone who likes vintage illustration art.

Artist Earl Norem created the artwork featured at the upper right corner of page 47 in the HORRORHOUND article.

From the late-1950s to the mid-Seventies, Norem did hundreds of cover paintings and interior illustrations for men’s adventure magazines.

But most horror and fantasy fans are more familiar with the great cover paintings he did for Marvel Comics, particularly those he did for THE SAVAGE SWORD OF CONAN comic books.

There’s a nice example of one of Norem’s many Conan covers at the bottom left corner of page 47 of the HORORHOUND article. (It’s the cover of Issue #110, published in March 1993.) 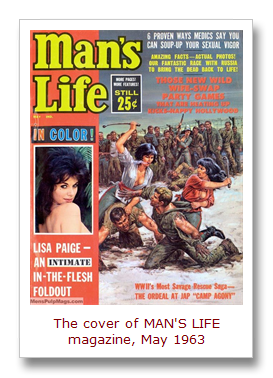 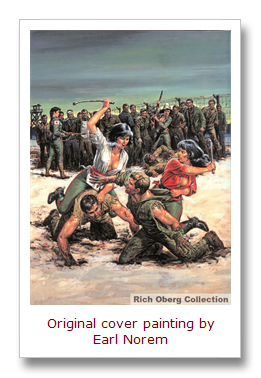 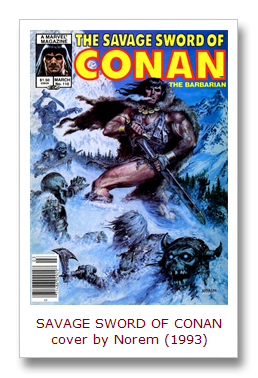 In upcoming posts, I’ll provide a closer look at the artwork and covers used on the final two pages of the HORRORHOUND article I put together with Rich Oberg.

In the meantime, you can now read the entire article for yourself. With the permission of HORRORHOUND editor Aaron Crowell, I’m now making it available as a free download in high-rez PDF format.