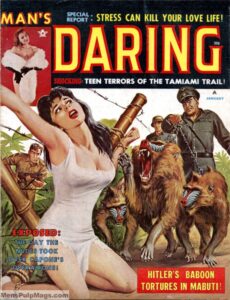 Some fans use those terms lovingly, some critics use them with derision.

In our view, “sweat magazines” are a specific subgenre of the men’s postwar pulp adventure periodicals that were published in the 1950s, 1960s and 1970s.

We use the term to refer to the men’s adventure magazines that primarily featured cover paintings of scantily-clad women and men being menaced or tortured by evil Nazis, Japs or Communists, bloodthirsty natives, psychopaths, Satanists or some other fiends.

Among collectors, these tend to be the most highly-prized men’s adventure magazines, especially issues that feature cover paintings by some of the best known of the many great artists who worked for men’s pulp mags, such as John Duillo, Norm Eastman, Basil Gogos and Norman Saunders.

Most of the fiction stories in men’s sweat magazines have sexual content that is spiced up with bondage, torture, whips, chains and other fetishy stuff.

But they aren’t very explicit by today’s standards. As movies, they’d be R-rated, not X-rated.

Most of their “news” and exposé articles also have some sex-related angle.

Of course, like other men’s adventure mags, sweats also have cheesecake photos featuring semi-nude models and “Good Girl Art” cartoons that reflect the politically-incorrect humor of the era. 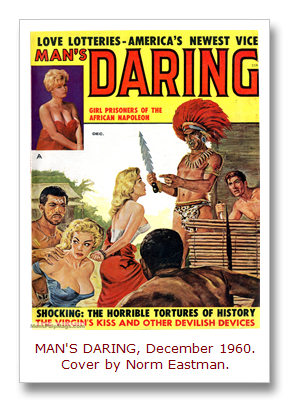 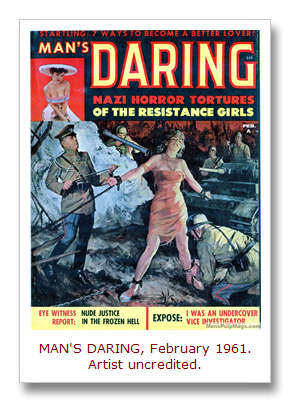 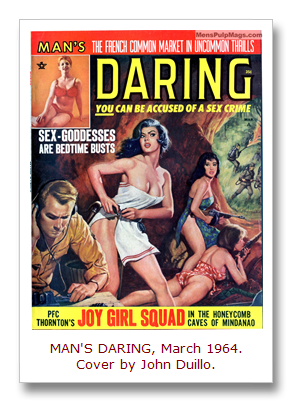 Based on the definition Rich and I use, less than a third of the 175 or so men’s adventure magazine titles published in the ‘50s, ‘60s and ‘70s qualify as true “sweat magazines.” 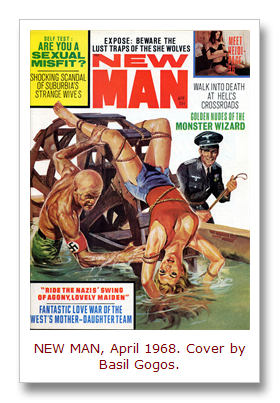 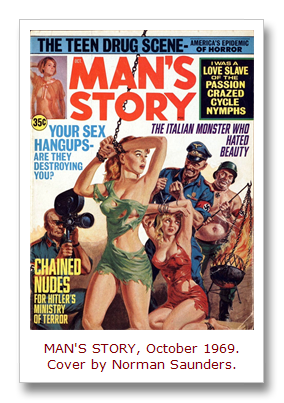 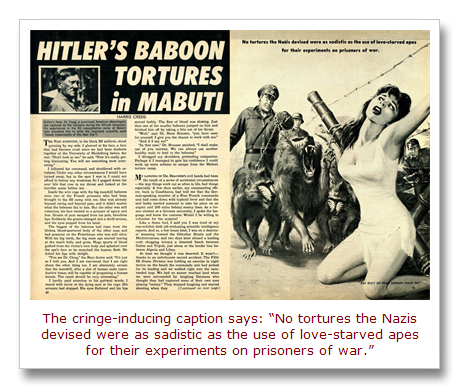 It’s one of the magazines I’ve made available in high resolution digital format in my Payloadz store. (Click this link to see what’s available there as downloads.)

MAN’S DARING was published bimonthly by the Candar from June 1959 to December 1966.

The cover painting on the January 1962 issue is a jaw-dropping sweat mag Nazi bondage and torture scene.

It shows a barely-clothed babe in bondage being terrorized by vicious-looking Mandrill baboons led on chains, like evil pets, by a Nazi SS officer.

In the background, a square-jawed he-man hero is coming to save the endangered damsel in distress. (I’m sure she’ll think of some way to show him her gratitude.)

The artist who painted this over-the-top fantasy scene is uncredited. It goes with the story titled “HITLER’S BABOON TORTURES IN MABUTI!”

The cover painting is reused as an interior illustration inside, along with the cringe-inducing caption: “No tortures the Nazis devised were as sadistic as the use of love-starved apes for their experiments on prisoners of war.”

Other over-the-top sweat mag stories in this same issue include a “love slave” story (a common topic in men’s adventure magazines), a story that cleverly manages to combine striptease and whipping, and a cool Sixties “juvie” story about teenage delinquents who terrorize Florida’s Tamiami Trail highway. 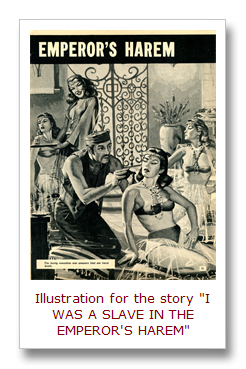 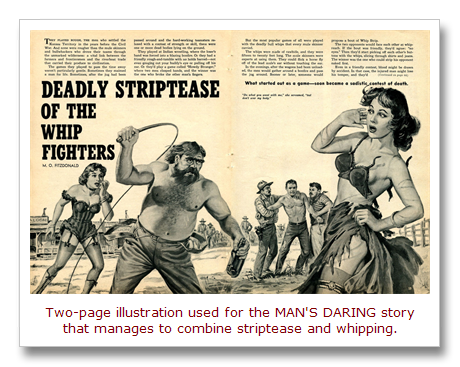 “WHEN I WOKE UP THAT morning last April, Fred was looking at me. I was still half-asleep, and I started wondering what the hell he was doing back here instead of being on his way to headquarters in Leopoldville. For a moment, I got real sore, and then I woke up all the way, and got sick to my stomach.
Fred was looking at me from the night table, and I could tell from his expression that he was surprised. His eyes stared in terror, and his mouth was half open as if he were trying to scream, and there was smeared blood that had dried on his lips and chin. He didn’t say anything. Heads, alone, can’t talk.”

Unfortunately, MAN’S DARING rarely printed the names of the cover and interior artists. The one artist who is named in the January 1962 issue is the creator of the two-page “DARING CARTOONS” feature. Those outdated, sexist groaners were done by Hal Sherman.

Like Bill Ward and several other cartoonists of the day, Sherman was known for his “Good Girl” cartoons, especially his “NUDENIKS” series. (If you search online, you might find some genuine NUDENIKS cocktail napkins to buy for your next stag party.) 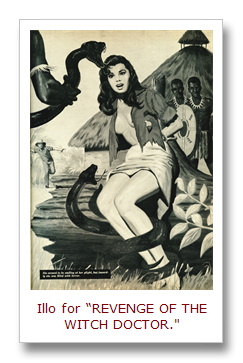 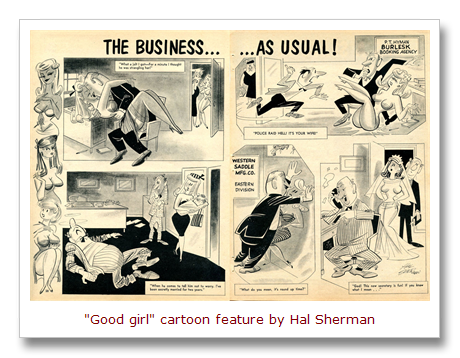 The spreads in the January 1962 issue feature several models who were quite popular in their day. One is the British beauty Laura Thurlow. In addition to modeling for men’s mag photos, Thurlow worked as a fashion model for the London-based Cherry Marshall agency in the 1960s and as an actress in several Brit movies and TV shows.

Another photo spread features the buxom Marilyn Monroe lookalike Maria Stinger (whose name is sometimes given as Maria Stringer). She was discovered in 1954 by the pioneering female model-turned-photographer Bunny Yeager. In fact, it was a picture Yeager took of Stringer that first jumpstarted Bunny’s career as a photographer and Maria’s career as a model and actress. 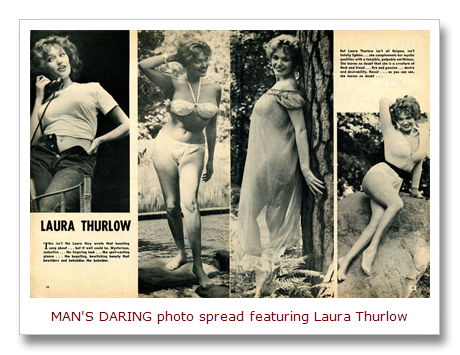 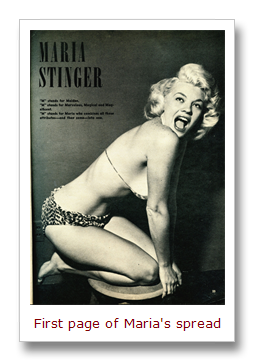 “After working for several years as a fashion model in Miami, I chose to move behind the camera, and in 1953. I took my first photography course at Lindsey-Hopkins Vocational Education School. 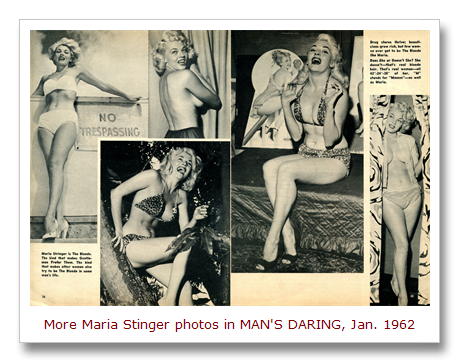 Most of my assignments involved shooting black-and-white photography with a two-dimensional camera; however, near the end of the course we students had the opportunity to shoot some color film and develop it for critiquing-color film was not in popular use at this time.

Little did I know that the assignment would lead to my selling one of my very first photos as a magazine cover, thereby thrusting me into the world of glamour photography.

The magazine was called Eye, and the cover appeared in March of 1954, a photo of a blond model named Maria Stinger flanked by two live cheetahs. [Probably the same cheetahs Bunny used in her famous “jungle photos” of Bettie Page that same year.]

It helped that Maria resembled Marilyn Monroe, but it was the fierce-looking cats that stole everyone’s attention. What a winning combination: wild animals and an untamed woman. I was a sought-after pin-up photographer from that moment on.”

Shortly after appearing on the cover of the pocket-sized men’s mag Eye in 1954, Stinger was crowned “Miami’s Marilyn Monroe” in a beauty contest sponsored by the Miami Herald newspaper. From then until the mid-1960s, she was a highly popular pin-up model who appeared on the covers of many men’s magazines, in their cheesecake photo spreads and in “art photography” books. 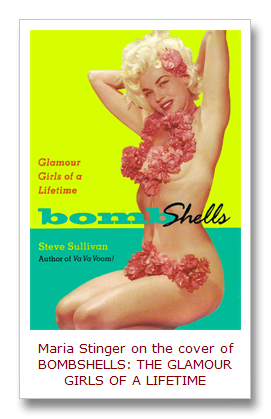 According to the book BUNNY’S HONEYS, Maria Stinger and Bettie Page were Yeager’s most popular and important models in the early years of her photographic career.

Like Bettie, Maria also did some bondage-style photos for the early mail-order fetish photo pioneer Irving Klaw. And, in the 1960s, she appeared in a series of soft-core nudie films, such as Bunny Yeager’s Nude Camera (1963), Goldilocks and the Three Bares (1963), Lullaby of Bareland (1964) and Nudes on Tiger Reef (1965).

Tragically, “Miami’s Marilyn Monroe” committed suicide by overdosing on pills in 1967, five years after the real Marilyn did. Unlike Monroe, Stinger’s passing didn’t generate major news and her fame faded away. But in recent years there has been renewed interest in her.

Photos of Stinger are now collectors’ items on eBay. One of fan favorite shots of her wearing a “bikini” made of flowers is featured on the cover of the book BOMBSHELLS: GLAMOUS GIRLS OF A LIFETIME.

A while ago, I noticed that there’s an effort underway to finance a documentary film about her, tentatively titled BOMBSHELL: THE LIFE OF MARIA STINGER. Let’s hope it will eventually get made.

Another legendary glamour girl featured in the January 1962 issue of MAN’S DARING is Dawn Richard (wrongly credited in the magazine as Dawn Richards, with an “s”). 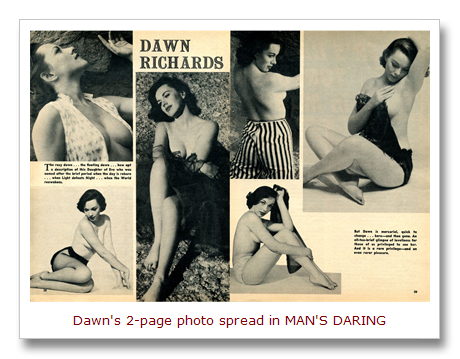 Dawn is probably best known for being the ill-fated gymnast in the classic horror flick I WAS A TEENAGE WEREWOLF (1957) and the PLAYBOY Playmate of the Month in May 1957.

In July of 1957 that year, she was PLAYBOY’s cover model.

“Among the TV shows she made guest appearances on were episodes of FATHER KNOWS BEST (1954), PERRY MASON (1957), COLT .45 (1957) and DRAGNET (1951)…Dawn also posed for such adult publications as BACHELOR, MODERN MAN, MAN’S MAGAZINE and VUE. Richard married producer David L. Wolper in 1958 and had three children with him prior to divorcing Wolper in 1969. Dawn now lives in Burbank, California.”

There are many other things to marvel and chuckle at in the January 1962 issue of Man’s Daring.

Check it out for yourself by downloading the complete digital version.

If you like this blog, I’m pretty sure you’ll enjoy reading it. And, your purchase will help keep this blog going.