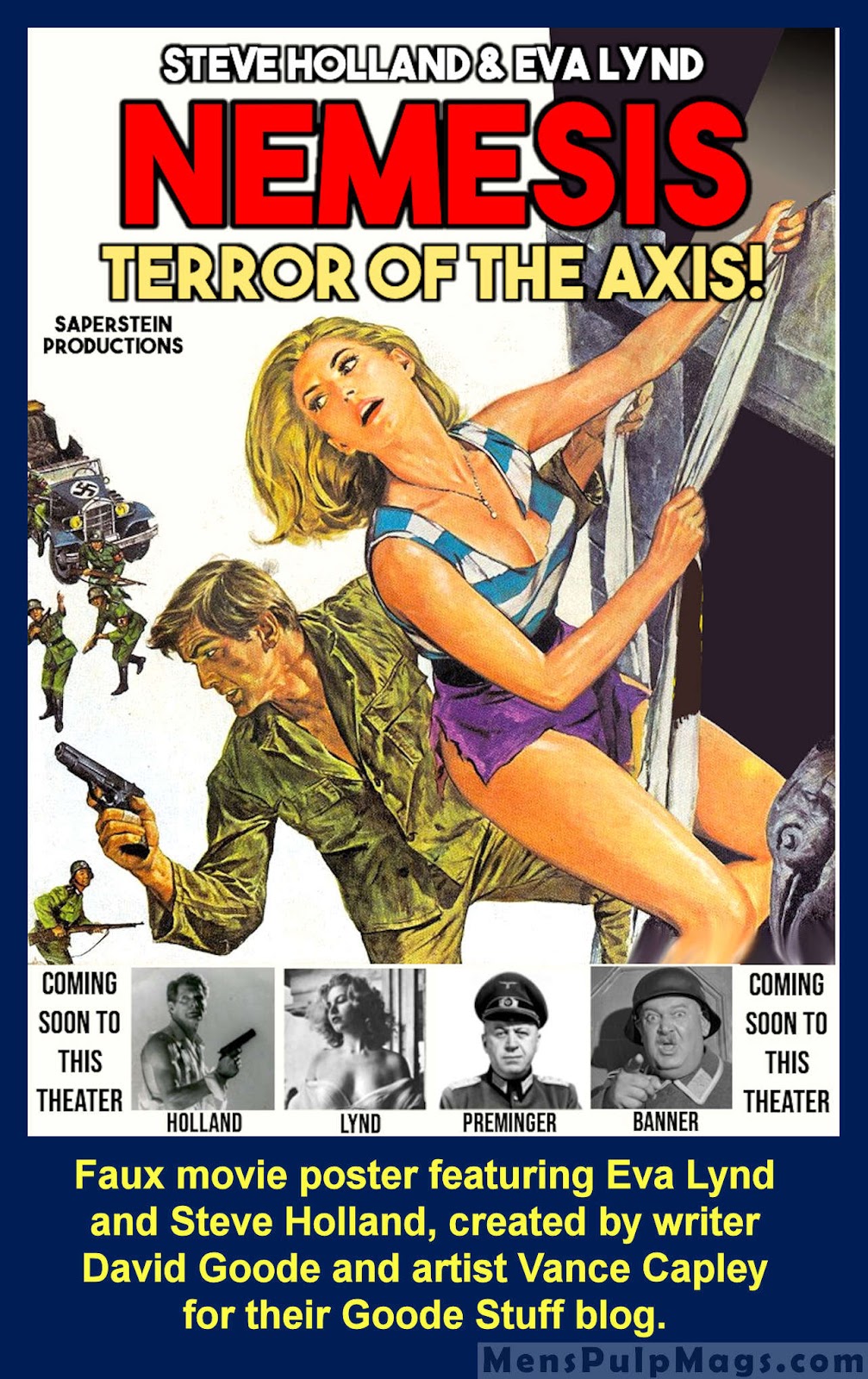 During the past two years, while working with the legendary artist’s model, pinup photo model and actress Eva Lynd and my publishing partner Wyatt Doyle on the book EVA: MEN’S ADVENTURE SUPERMODEL, I’ve seen many online posts that show illustrations or photographs Eva modeled for.

A good percentage are reposts of men’s adventure magazine cover and interior illustrations, artist reference photos and glamour girl photos that I posted on this blog, on my Flickr page or in the Men’s Adventure Magazines & Books and Facebook Group.

The most creative uses of those images I know of are on a blog called Goode Stuff, a joint creation of writer, comics creator and retromedia maven David Goode and his friend, artist and publisher Vance Capley.

David is, among other things, an aficionado of men’s adventure magazines (MAMs).

So, he knows that Eva is the most widely-recognized female artist’s model in the MAM genre, in addition to being a popular pinup photo model featured in various types of men’s magazines from the mid-1950s to the 1970s.

He also knows that Steve Holland is the most famous male model in the realms of both MAMs and paperback covers.

Holland is particularly well known for being the model artist James Bama used for Doc Savage, in the cover art Bama did for the Bantam paperback series.

But Steve also modeled for scores of other artists and literally thousands of other paperback cover and magazine illustrations.

In addition, David knows that Eva was an actress who appeared in several movies and many TV shows, including HOGAN’S HEROES.

He used that knowledge to create some very cool posts on the Goode Stuff blog, in which he mused about imaginary movies that would star Eva and Steve, and Vance Capley created amazingly realistic faux movie posters to go with them. 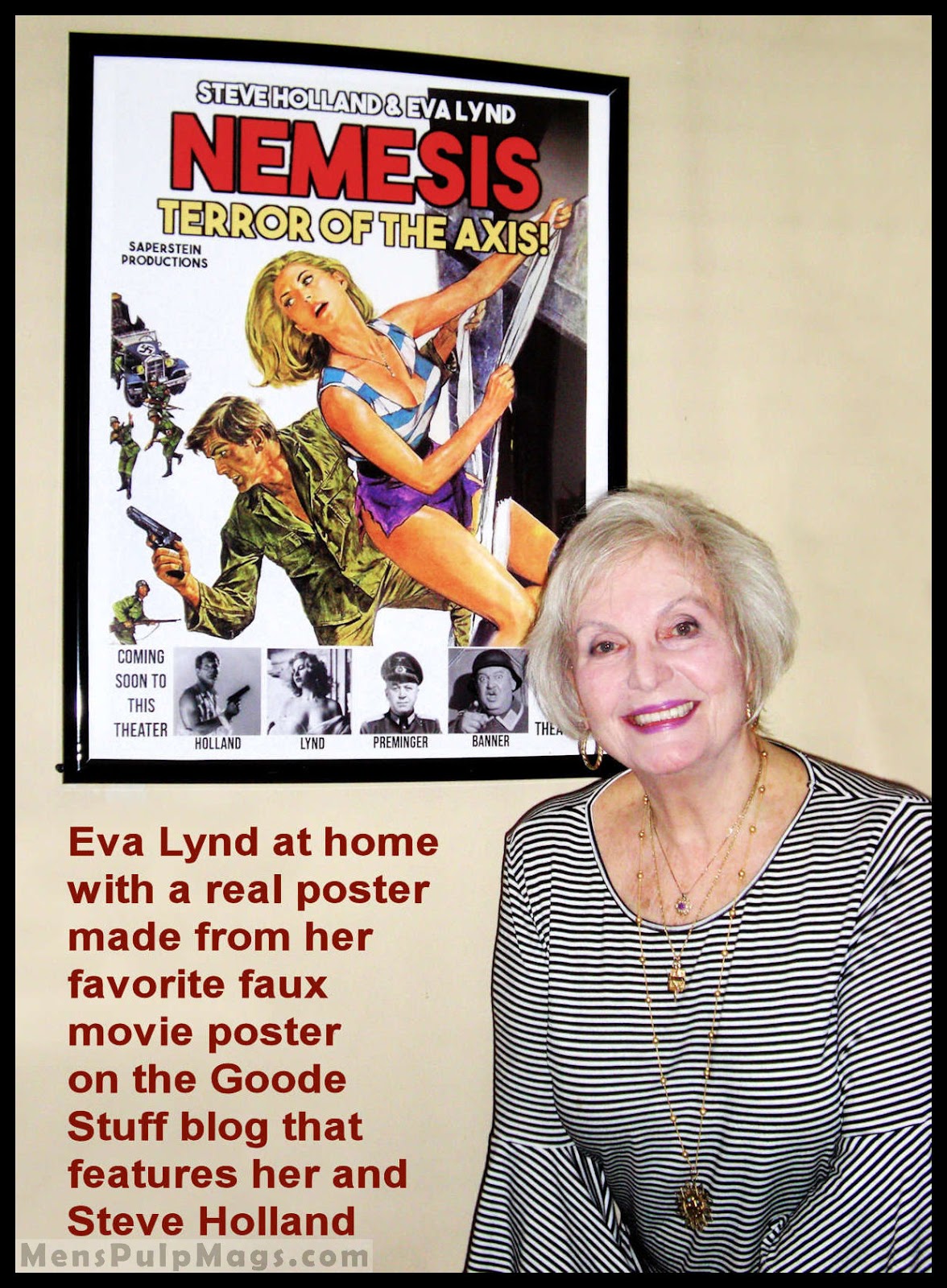 The most recent one is in a post titled “FAN BOY FANTASY MOVIES.” It features several movies David created in his imagination. One is a World War II film he called NEMESIS: TERROR OF THE AXIS.

The poster Vance Capley created for it shows a painting of Eva Lynd and Steve Holland climbing down a building, trying to escape Nazi soldiers.

The photo credits at the bottom of the poster show that the other stars of this fantasy film are actor/director Otto Preminger as a Nazi General and John Banner as a Nazi soldier. Banner, of course, played Sergeant Schultz in HOGAN’S HEROES and was famed for his catchphrase “I know nothing!”

The painting Vance Capley used for the main image of the poster is a Norm Eastman cover painting Eva Lynd and Steve Holland modeled for that was used on the cover of MAN’S CONQUEST, October 1968.

When I saw that post, I sent a link to Eva Lynd in an email and she loved it. So much so, that she had a real poster made from the faux NEMESIS: TERROR OF THE AXIS! poster to hang on her wall at home.

Eva had seen the previous faux movie posters Goode and Capley created using her image and liked them all. But NEMESIS: TERROR OF THE AXIS! is her favorite.

“The first time I saw one of the fake movie posters starring Eva Lynd and Steve Holland, my thoughts were simply WOW! I wish I had actually been in that movie. Since then, there have been a few more, like OPERATION VALKYRIE, where I was some sort of freedom fighter brandishing a very dangerous looking weapon. Very impressive. However, my favorite is now NEMESIS: TERROR OF THE AXIS! This is where Steve and I try to escape out a window with the enemy waiting below. One interesting thing about this one is that John Banner is in the cast. He was a very nice person, and a friend of mine who was responsible for me getting a part in an episode of the TV series HOGAN’S HEROES. I certainly wish that I could claim these films on my resume.”

She added (with a virtual smile):

“When I think about it, I have a very strong memory of that window, and how easy it seemed to be for us to escape that way — until we saw who was waiting for us below. Luckily, Steve had a gun in hand so…well, to know what really happened, you will have to see the movie.”

The HOGAN’S HEROES ep Eva referred to is “The Meister Spy” (Season 6, Episode 16), first aired on January 17, 1971. She is credited in that under her birth name Eva von Fielitz, which she used for some TV shows and movies.

We show stills from that episode in EVA: MEN’S ADVENTURE SUPERMODEL and you can watch it online on the Internet Archive. (Click the link at left, then scroll down to the episode.)

She shows up a little more than 9 minutes in, looking icily gorgeous in a purple dress, in a scene with familiar character actor Oscar Beregi Jr. and star of the show, Bob Crane. 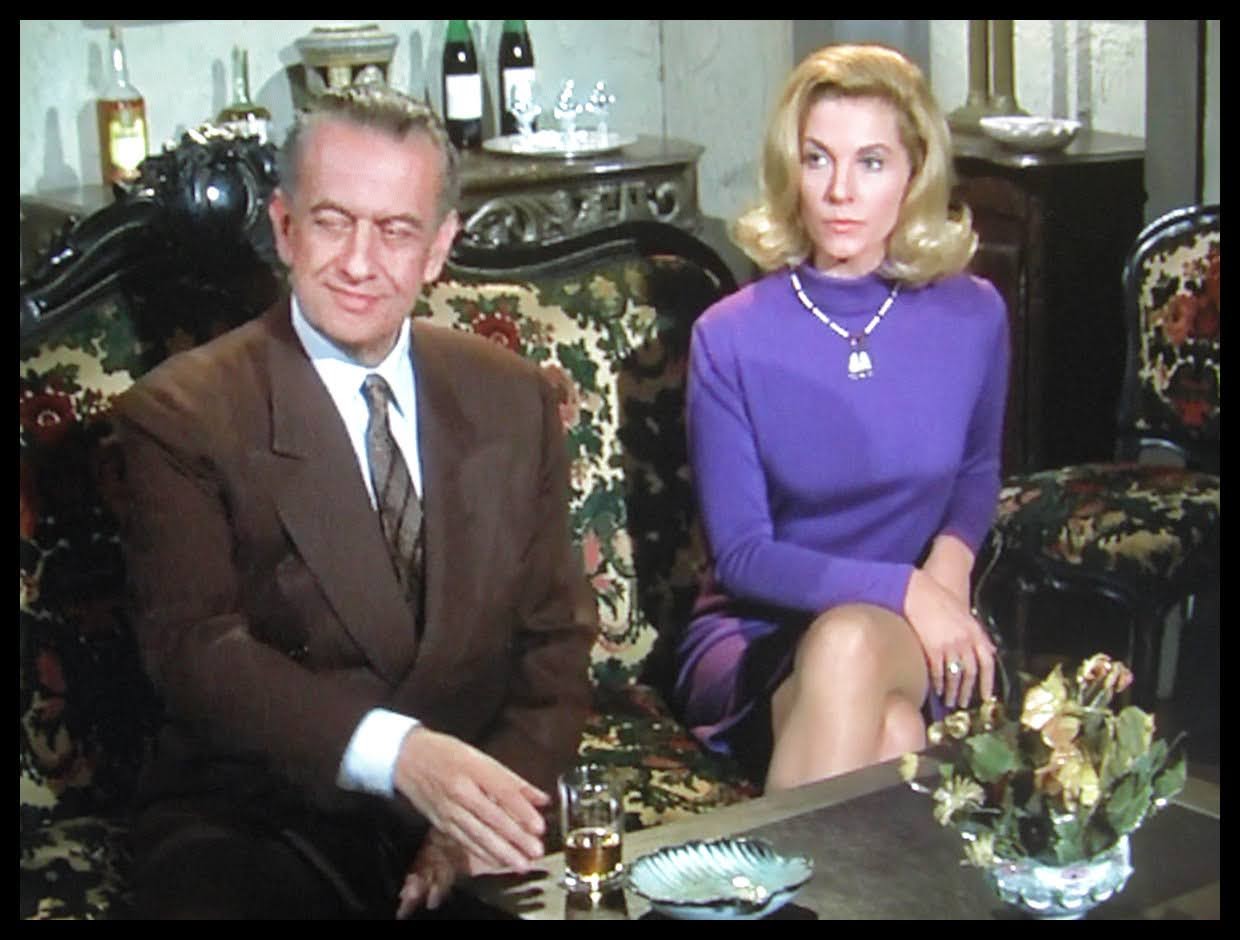 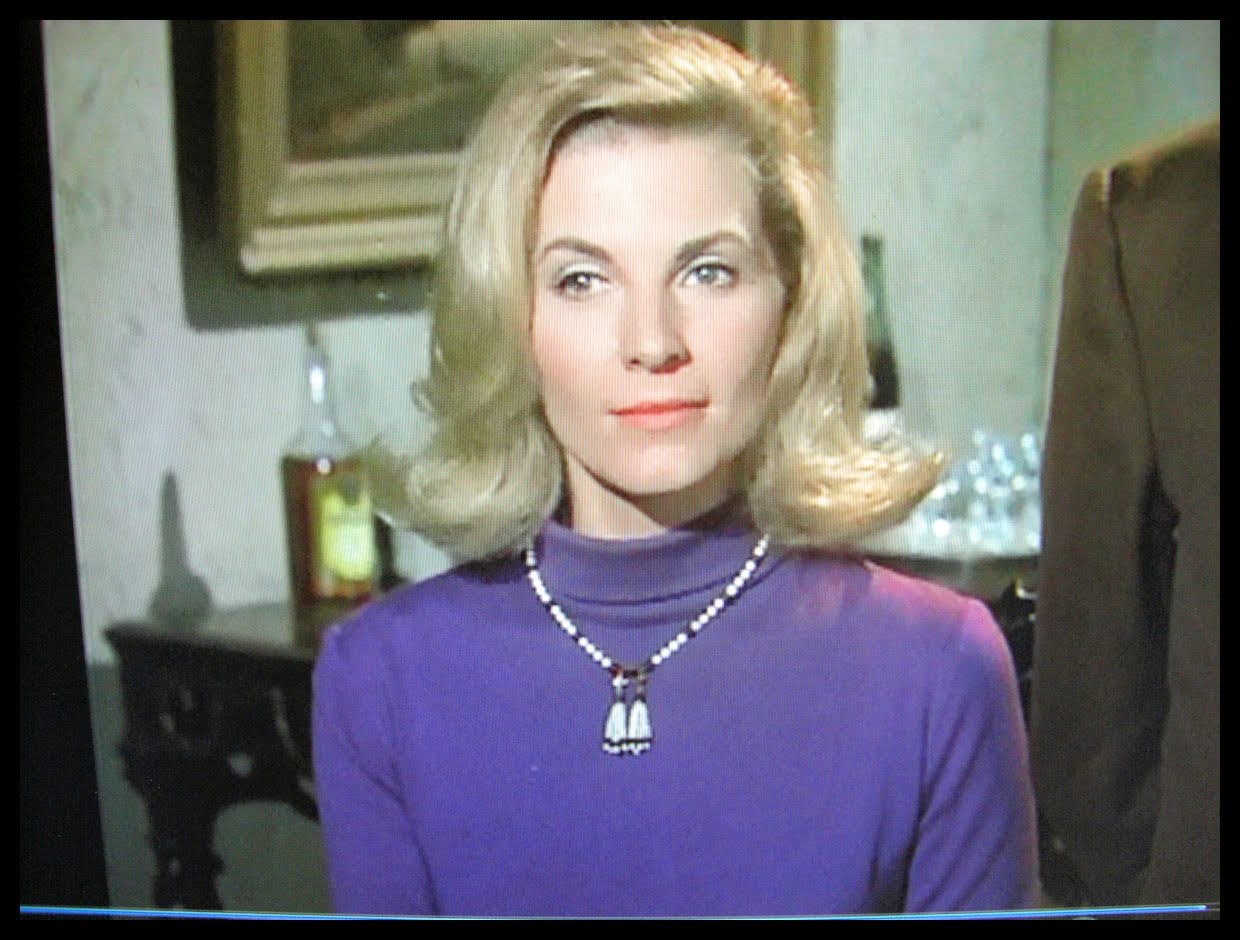 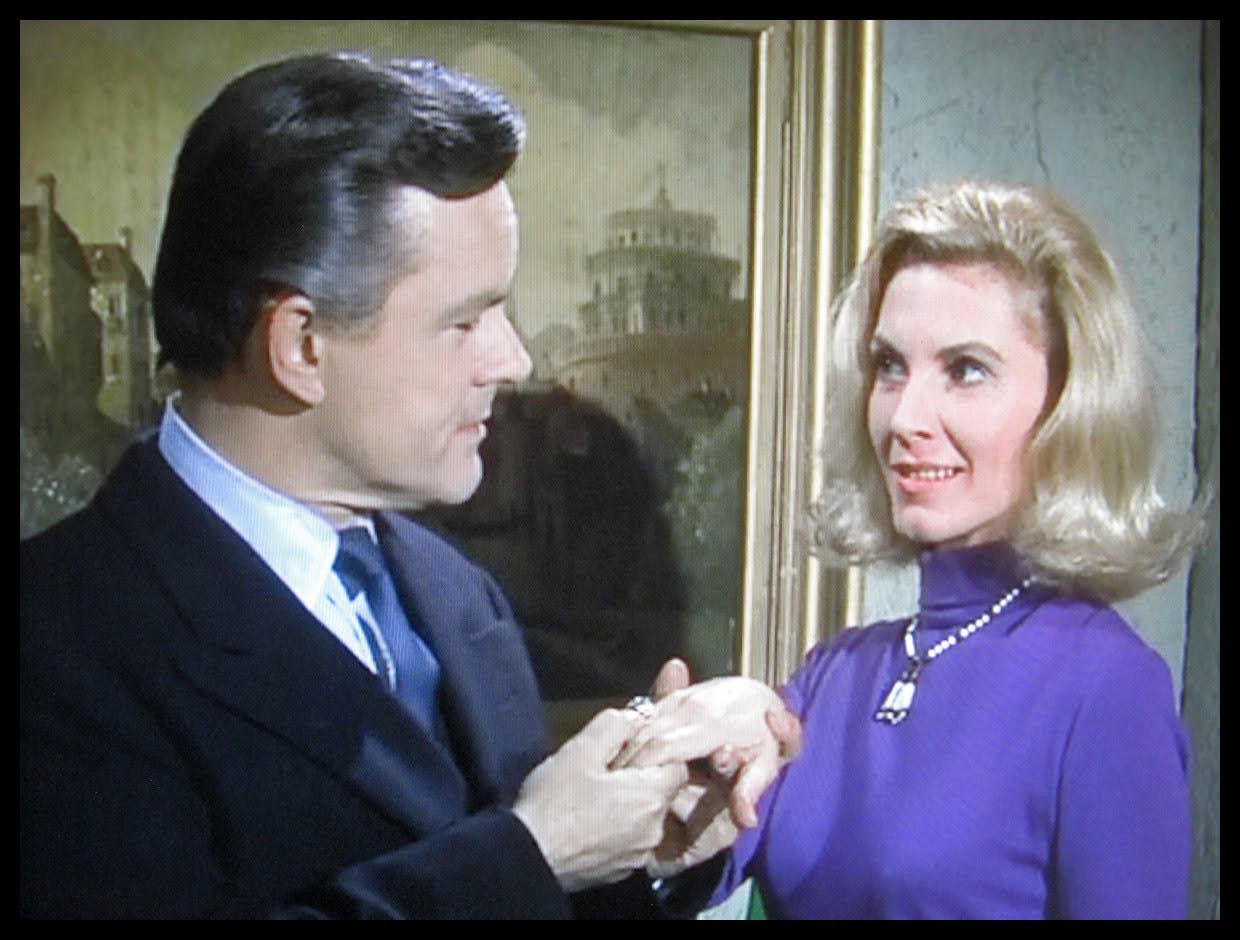 The OPERATION VALKYRIE faux poster by Goode and Capley that Eva mentioned is probably my own personal favorite. It uses a cover painting by artist Norm Eastman that first appeared on the cover of NEW MAN, December 1968. Wyatt and I picked it as the cover art for the deluxe hardcover edition of EVA: MEN’S ADVENTURE SUPERMODEL.

In Goode and Capley’s poster for OPERATION VALKYRIE, Eva stars as a machine-gun toting Maquis freedom fighter and Steve Holland co-stars, presumably as her comrade-in-arms. Yul Brynner plays the evil Kommandant Roter Schädel. (The name Schädel is a clever pun, since it means “bald head” in German.)

Other stars in this imaginary film are the sassy writer, actress and PLAYBOY Playmate of July 1956 Alice Denham, and pin-up model and singer Yvette Vickers.

Vance sells a t-shirt featuring the OPERATION VALKYRIE poster he created in his online shop on the Teepublic site. Naturally I bought one. 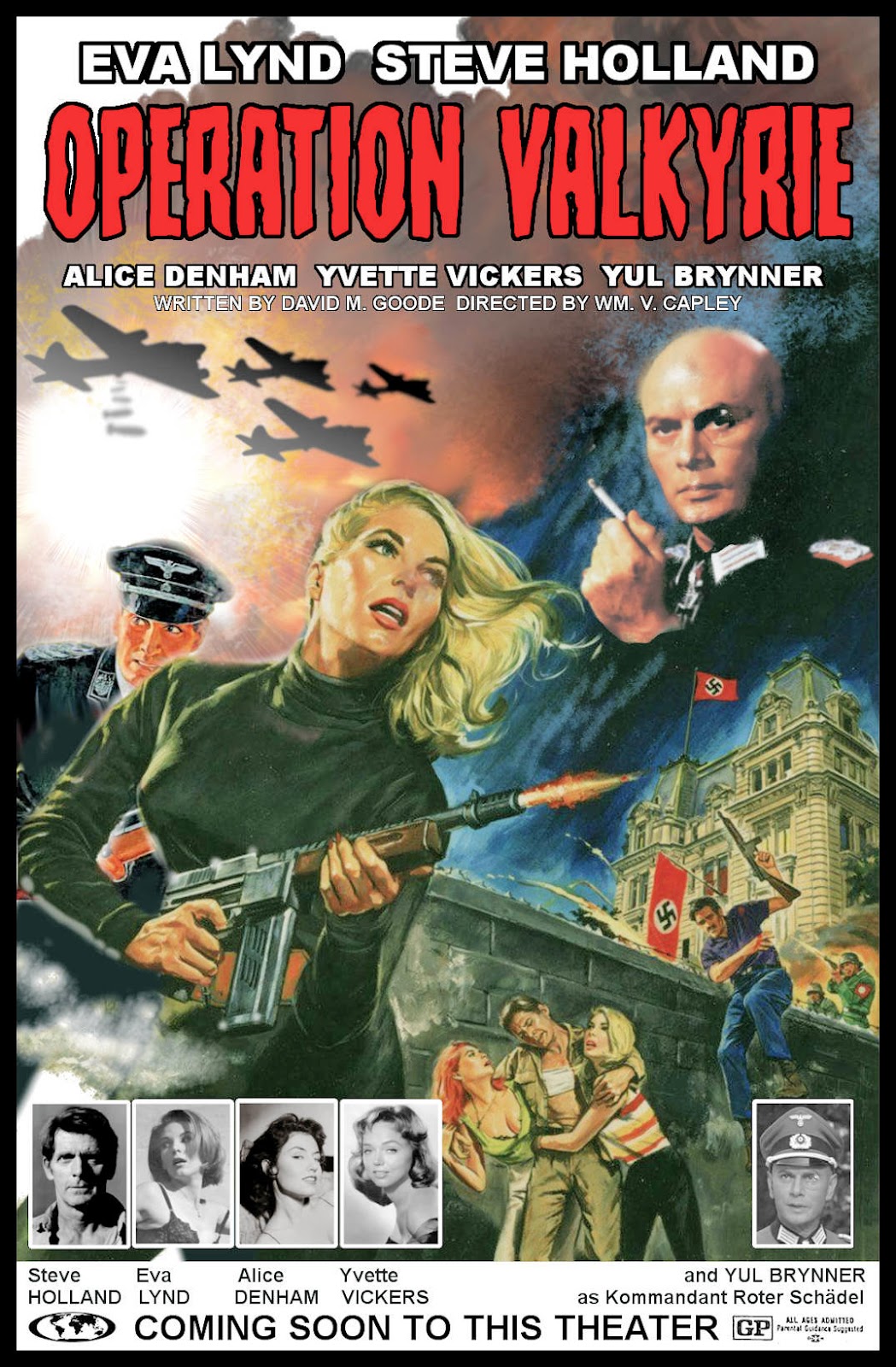 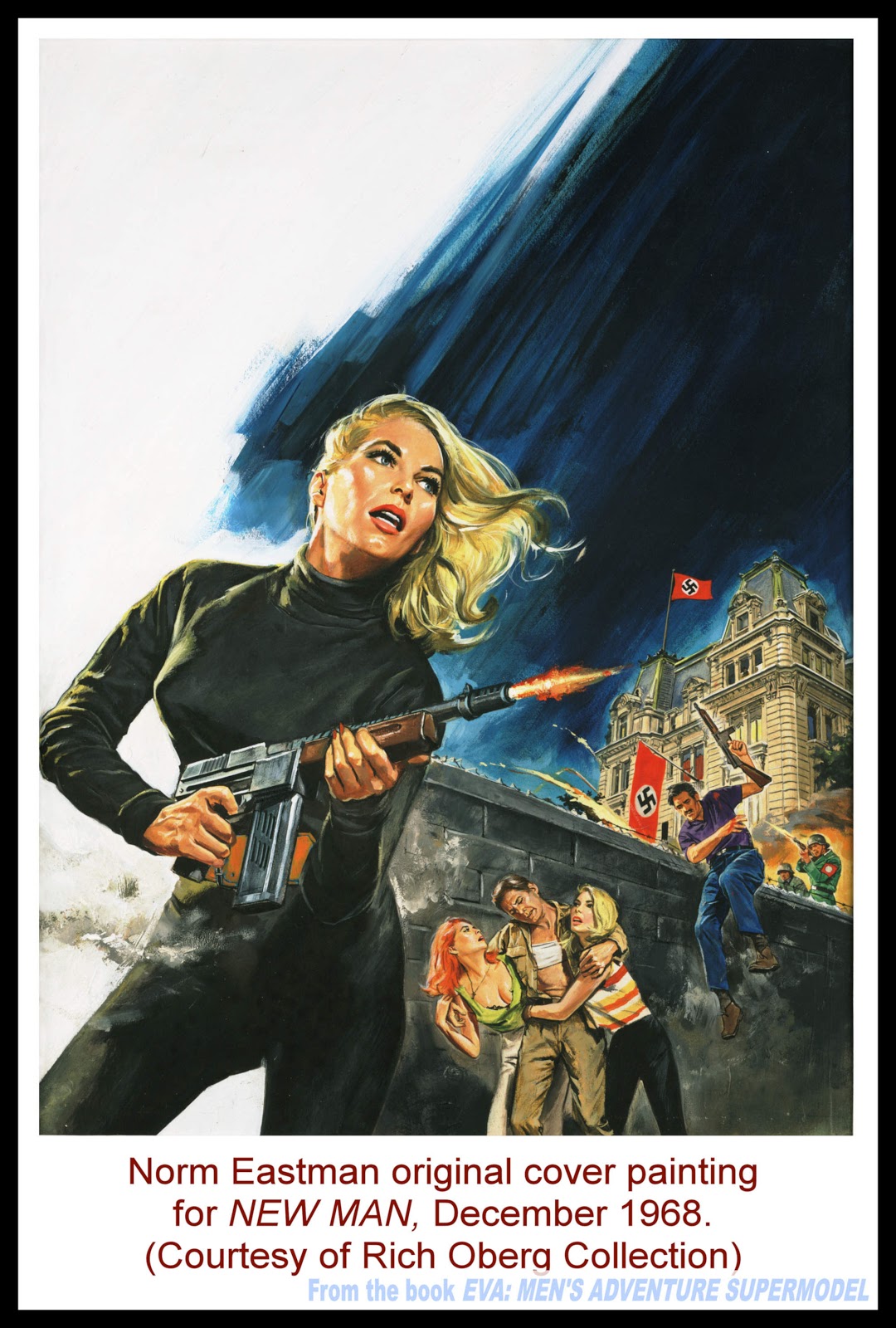 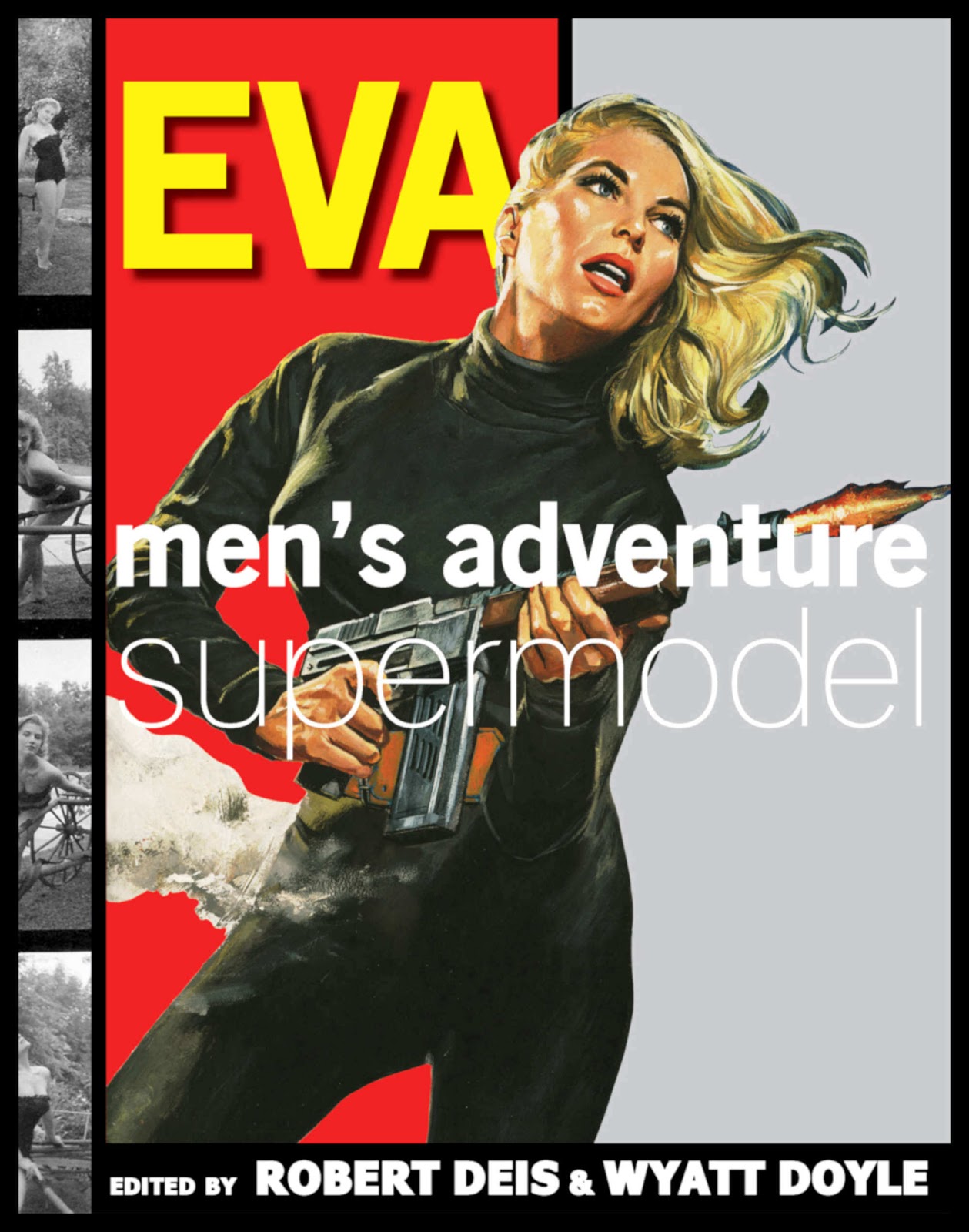 The first Goode Stuff faux movie posters starring Eva Lynd and Steve Holland are in an older post. One is for the imaginary movie FORTRESS OF THE DAMNED. Second billing goes to Alice Denham and John Banner.

For that poster, Vance used Norm Eastman’s cover painting for MEN TODAY, January 1964, which Eva and Steve modeled for, plus a reference photo of the two shot by Al Rossi.

Rossi based an interior illustration he did for ACTION FOR MEN, September 1964 on the photo and both the pic and illo are shown in our EVA book. The story they were used for is titled “STRANGE SECRET OF KOREA’S NIGHTIME NYMPH.” Eva Lynd was the model for both female characters in the scene. 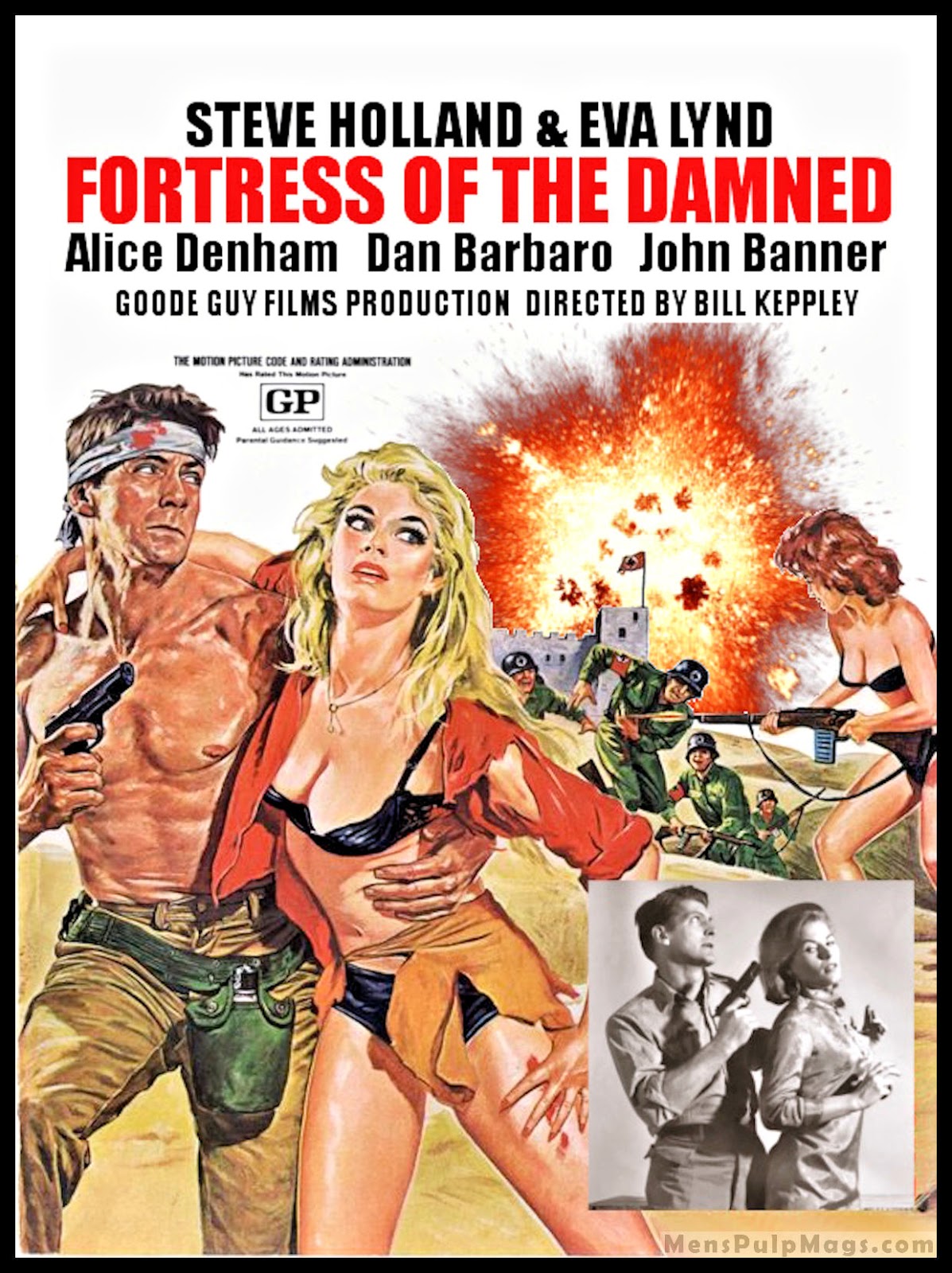 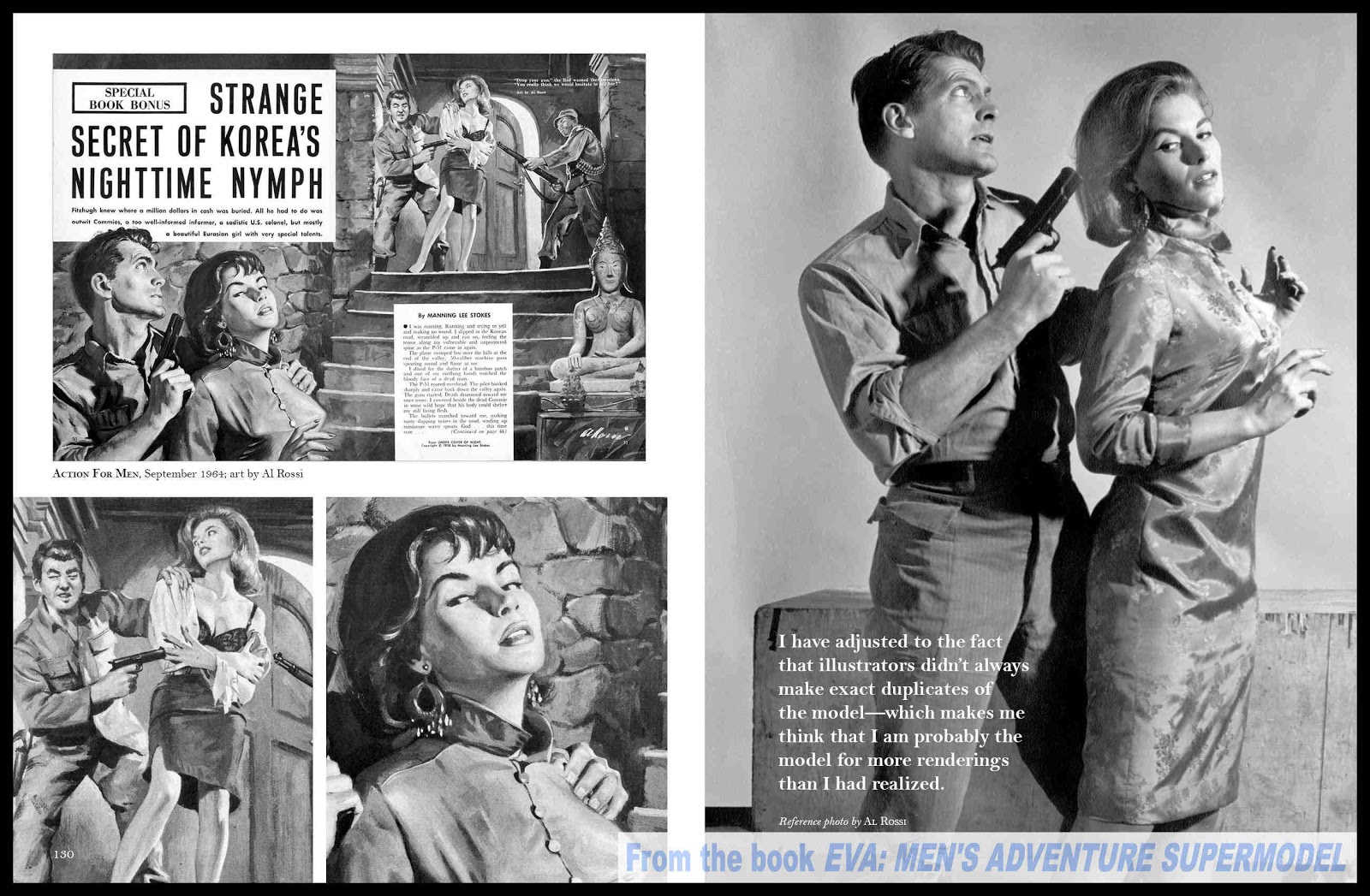 The Goode Stuff post with the FORTRESS OF THE DAMNED poster also includes a poster for another David Goode fantasy movie starring Steve Holland and Eva Lynd that he named OPERATION: RAGNAROK.

For that one, Vance Capley created a poster that features one of the original paintings by Mort Kunstler that Holland modeled for. It was used in the STAG Annual #12 in 1972. (By the way, you can see over 100 of Mort’s original men’s adventure magazine paintings in our new book MORT KÜNSTLER: THE GODFATHER OF PULP FICTION ILLUSTRATORS.)

Capley also created a horizontal promotional ad using that Kunstler artwork and one of the Al Rossi reference photos of Steve and Eva previously posted here and included in our EVA book. Rossi’s illustration based on it was first used for a story in FOR MEN ONLY, March 1965 titled “BLACK SEA BREAKOUT OF ARIZONA BEN EAGAN.” 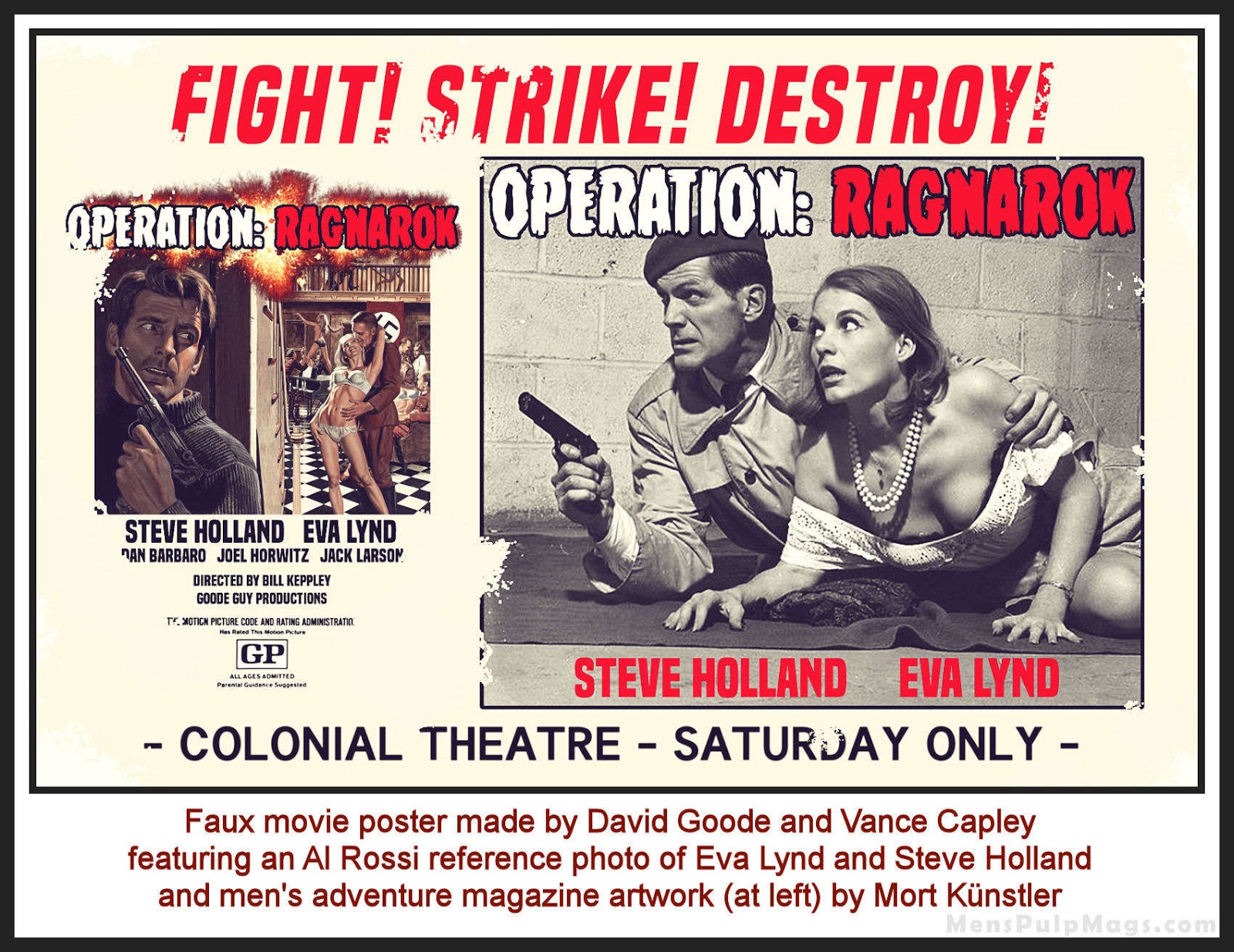 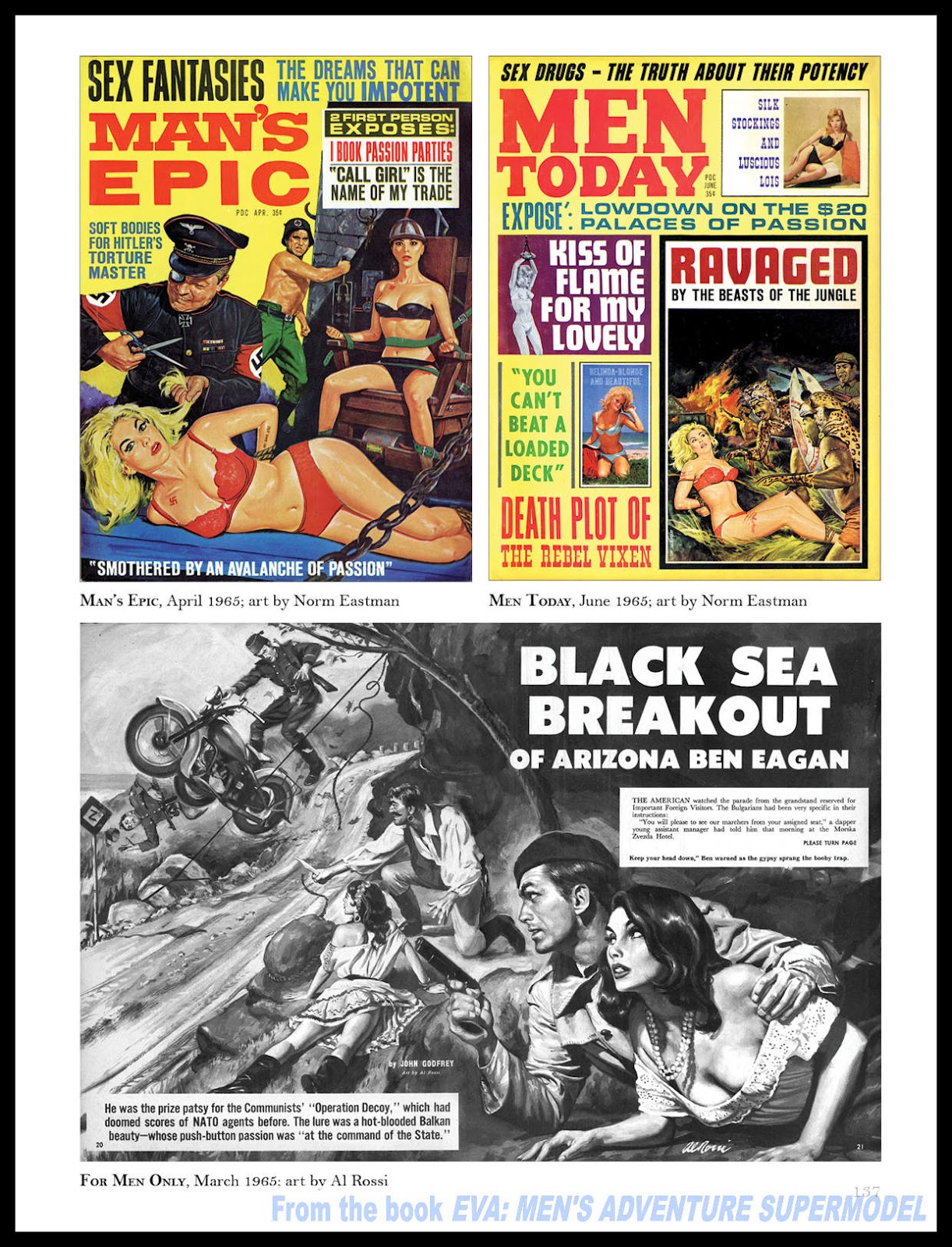 Fantasy film posters are just a few of the cool things you’ll find on the wide-ranging Goode Stuff blog. There are also many posts about comics, classic action/adventure, science fiction and sword-and-sandal movies, Mexican “luchahero” films, and many other topics.

I asked David how he came to collaborate with Vance on the Goode Stuff blog and other projects. He explained: 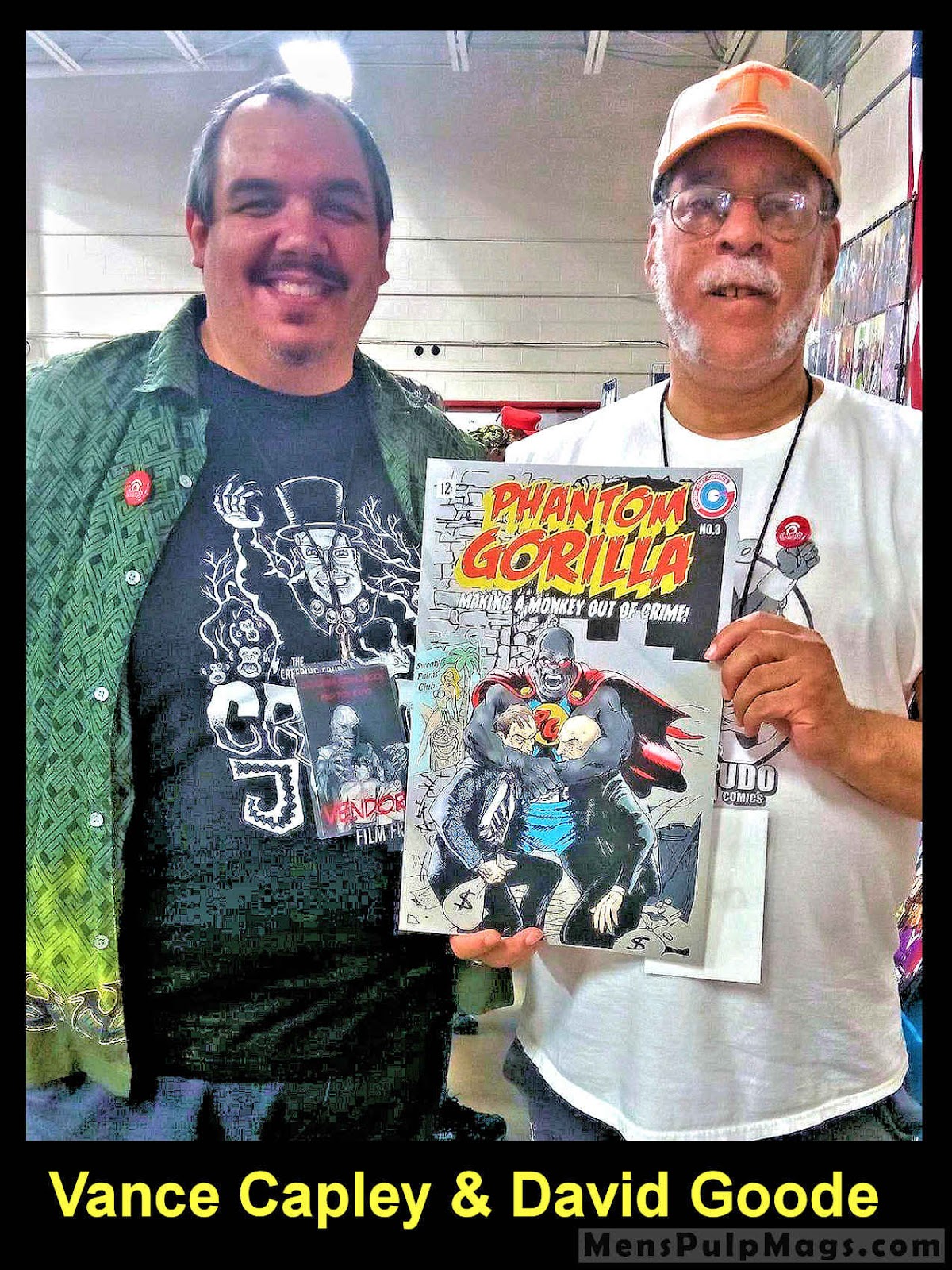 “Being born at the beginning of the Silver Age of Comics had quite an effect on me. After giving up the idea of putting on a pair of tights and going out into the streets and fighting a guerilla war against crime I decided to be a comic book creator. Like most comic book readers I created my own comic book stories for my own entertainment and the entertainment of my friends. Both writing and drawing them. I’d use my favorite characters from DC , Marvel and Charton and some of my own.

I found out early that the big companies weren’t really interested in developing new characters. They would stick with their proven winners. No interest in my characters The Argonaut or Kanonga of the Jungle, which was heartbreaking for me at the time. I did write on a professional basis sporadically. I had done some work with legendary pin-up cartoonist Bill Ward. And, I’m sure you knew those fan letters in adult film magazines weren’t always written by fans. But I mainly worked in normal jobs. Though in at least one of my ‘normal jobs’ I got to wear tights like a comic book hero.

But then came the age of self-publishing. I would team up with a number of artists over the years until I met a kindred soul in Mr. Vance Capley. Another fan of comics, B-Movies and all manner of psychotronica. For the last couple of years Vance and I have been putting together the weekly Goode Stuff blog where I get to wax nostalgic over the fan boy interests of my youth. And, of course, from time to time we’ll feature a short comic or cartoon featuring the comic book characters we created — Dr. Judo, Mr. Incognito, the Golden Adonis and the Phantom Gorilla among others.

What has become a popular feature on the blog is when we’ve visualized the alternate universe that exists in my head by creating faux movie posters for comic book movies from the Silver Age. We’ve also done the same with adventure movies out of the pages of ‘men’s sweat mags.’ We enjoy taking a cover of these mags with the heroes and heroines who were modeled after manly man model Steve Holland and the beautiful Eva Lynd. And, we like to combine those with photos of the pair and other actors for striking effect.”

I also asked Vance to tell me a bit more about himself and his collaboration with David. He told me:

“I met Dave through the classic, now sadly gone, Comic Buyers Guide back in the day. That was the place for creatives to get business done. He’d send me a rough draft of his strip of judoka luchadors Mr. Incognito. We did a few projects and started talking on the phone. Eventually, when time worked out, he came visit my family and I. As for Steve Holland, during the 80s Flash Gordon craze, my Dad got a VHS of Holland’s Flash Gordon. I’d seen Eva Lynd in art books, but it was Dave who filled me in on who she is. After doing some Mysterious Doctor Who faux posters with Dave, he suggested that we do some featuring Eva and Steve Holland. He came up with some cool ones, no doubt. I’m just a crazy blessed man enjoying what I do and appreciating everyone’s support.”

Eva Lynd and I look forward to the next faux Eva and Steve Holland movie poster David and Vance come up with. Kudos for the Goode Stuff you do, guys!

For the record, below are the original covers of the men’s adventure magazines featured in David and Vance’s fantasy movie posters… 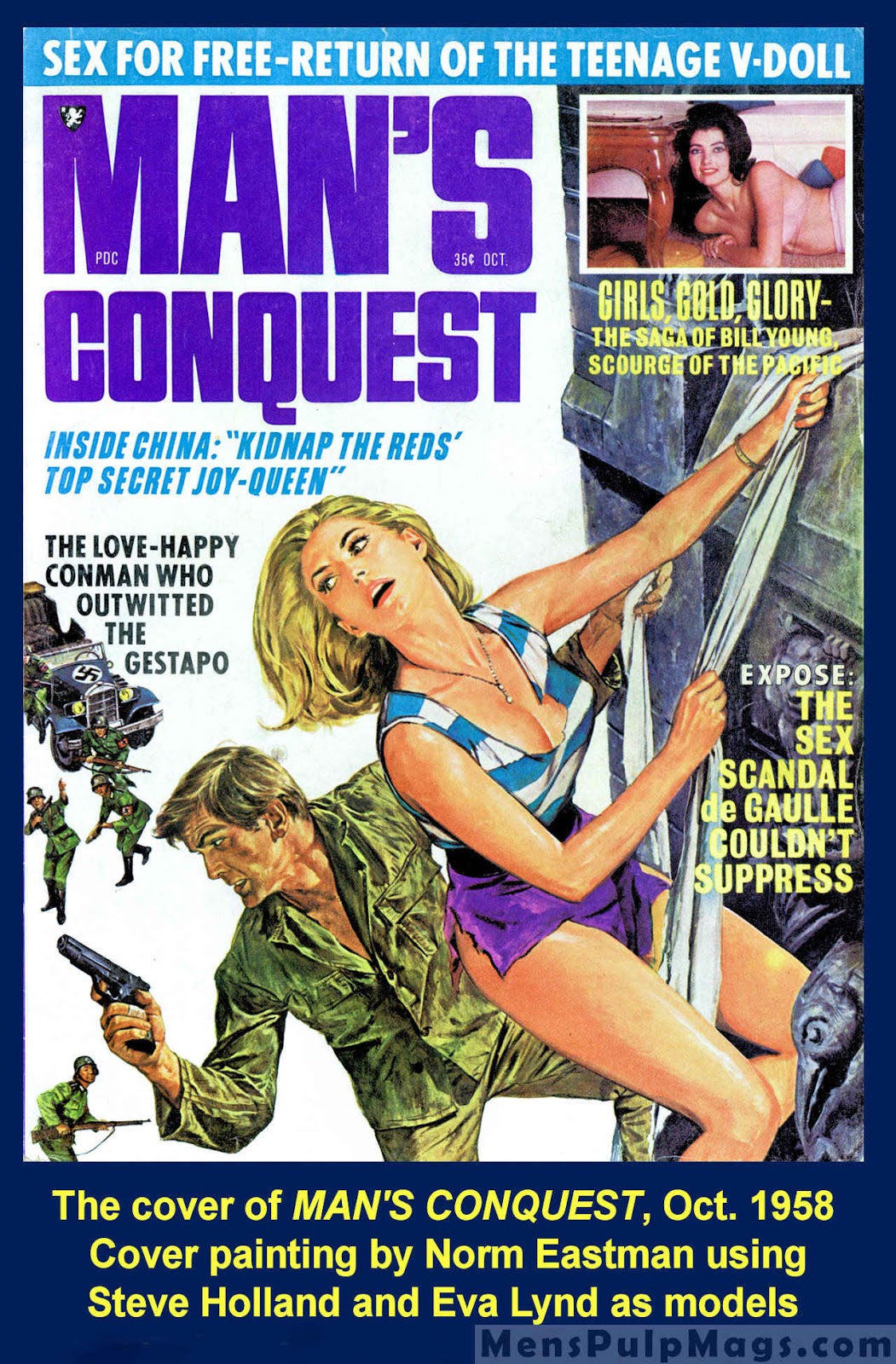 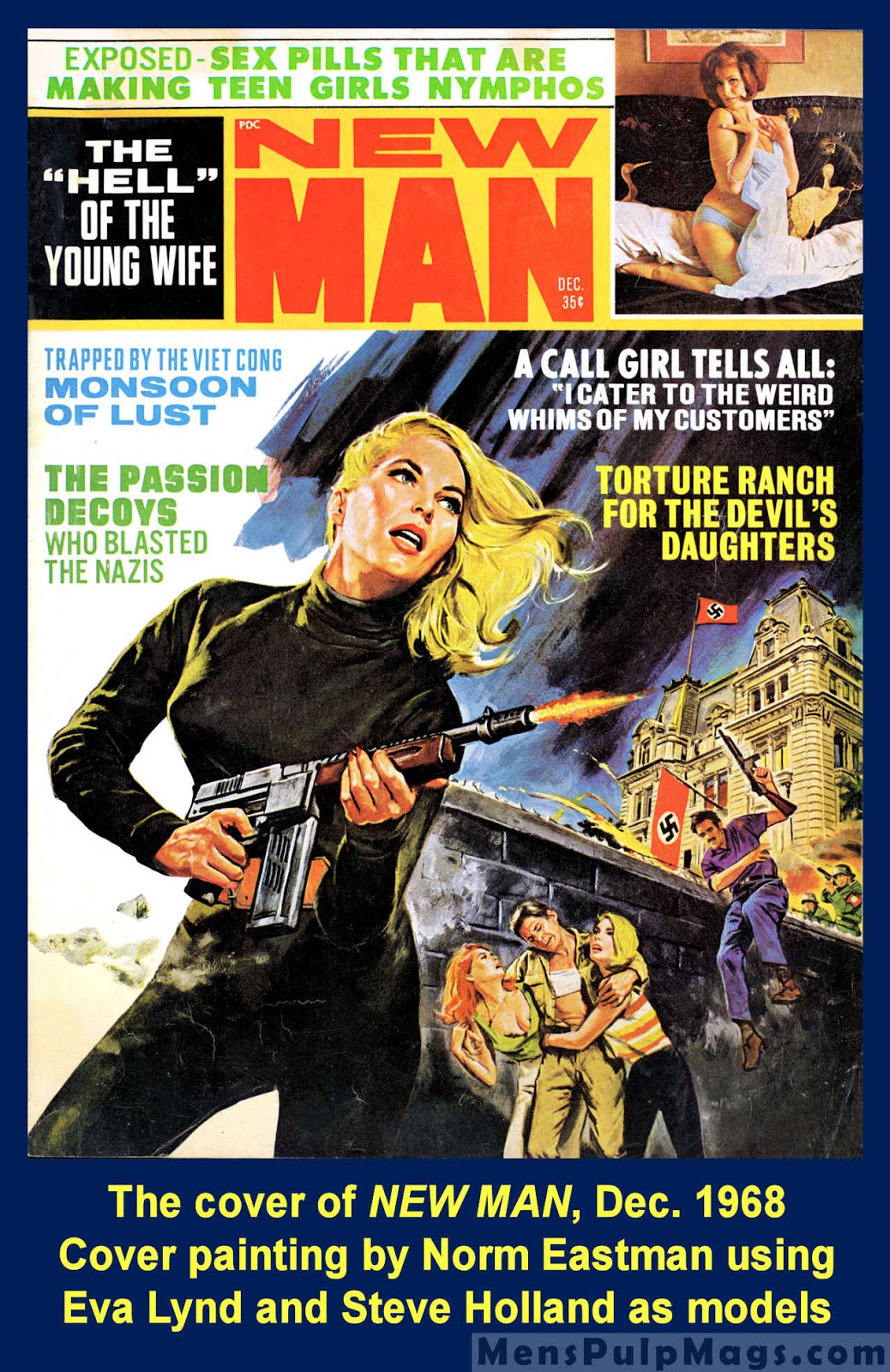 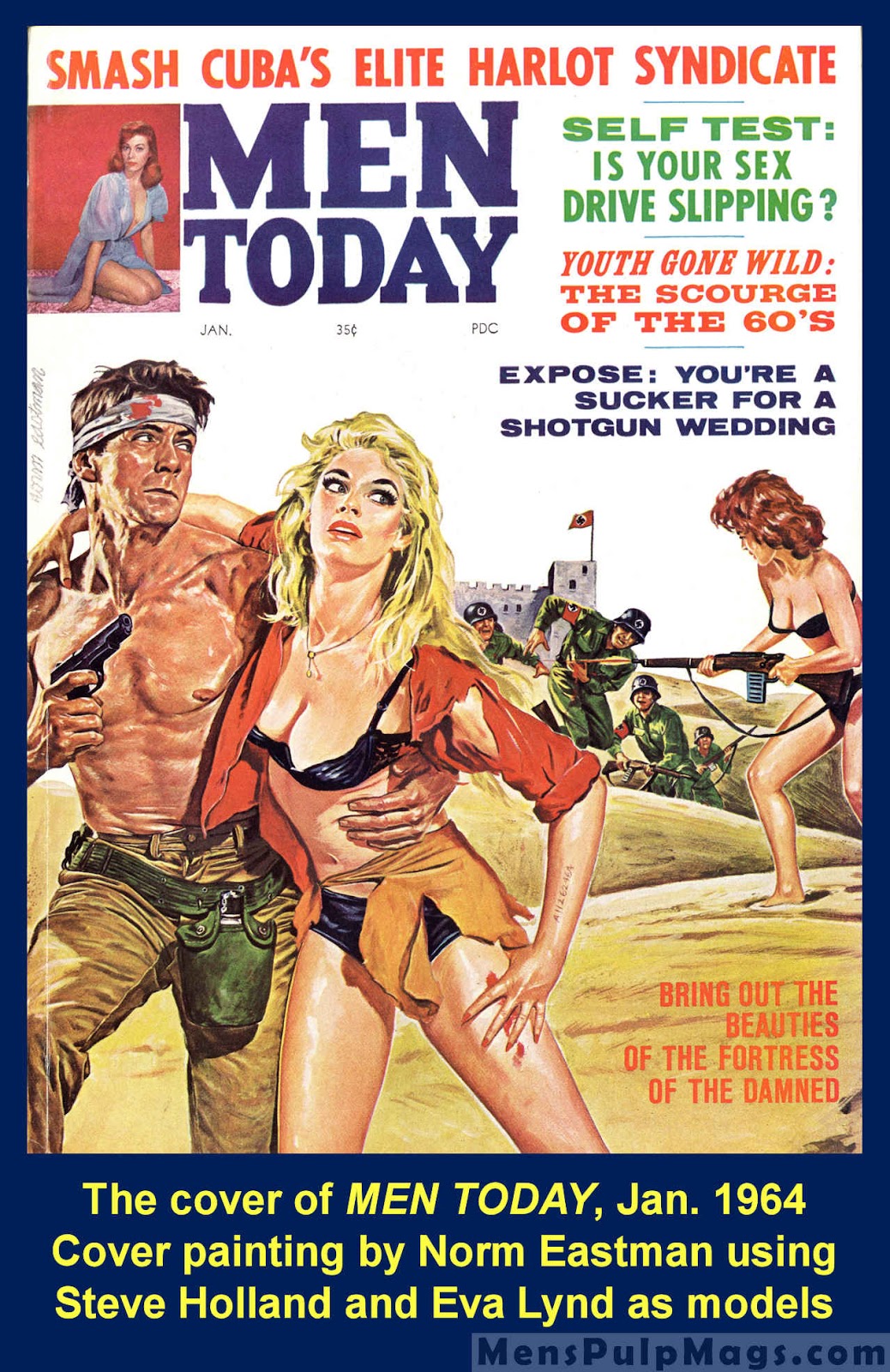