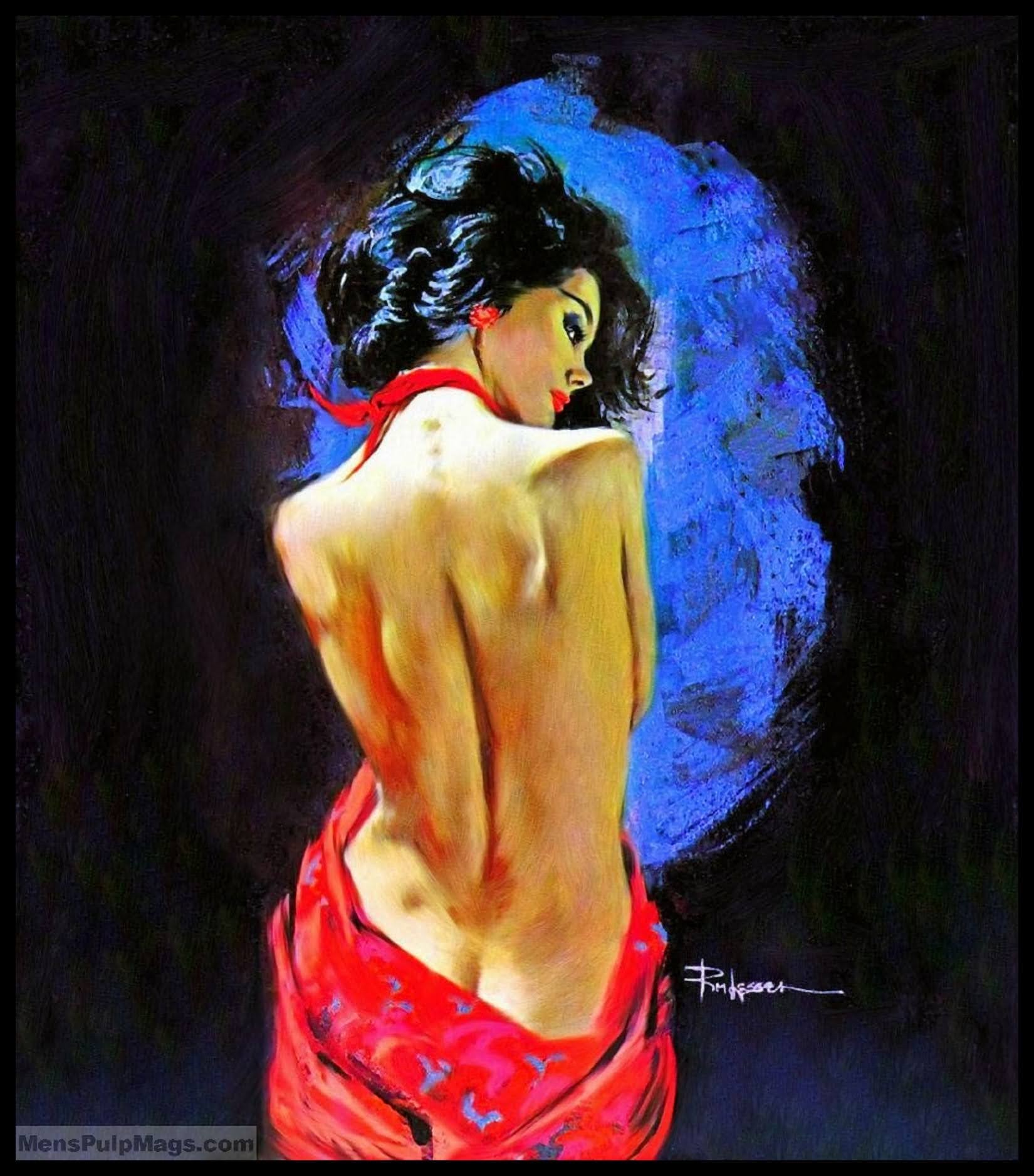 Most of my “spare time” nowadays gets filled up working on new books for the Men’s Adventure Library series I co-edit with Wyatt Doyle and new issues of the MEN’S ADVENTURE QUARTERLY magazine I co-edit with Bill Cunningham.

As a result, I don’t post on this blog as often as I did several years ago.

However, I do post something almost every day in the Men’s Adventure Magazines & Books Facebook Group, which now has more than 4,300 members.

If you’re a fan of vintage MAMs and action/adventure paperbacks but aren’t a member of our group yet, I encourage you to join us.

Some of our members are newbies to those genres, some are highly knowledgeable collectors, and some are notable writers and artists.

In case you’re not a member yet, here’s a look at some of my recent posts in the group…

I’ll start with the image at left. It’s the original cover painting artist Ron Lesser created for the 1962 Lancer edition of CURTAINS FOR A LOVER by Robert Dietrich (a pseudonym of E. Howard Hunt).

The model was Ron’s wife Claudia, who he used for many of his paperback cover paintings.

At right is the book cover.

Ron Lesser, who is alive and well and still painting, is one of the grandmasters of paperback book cover art. 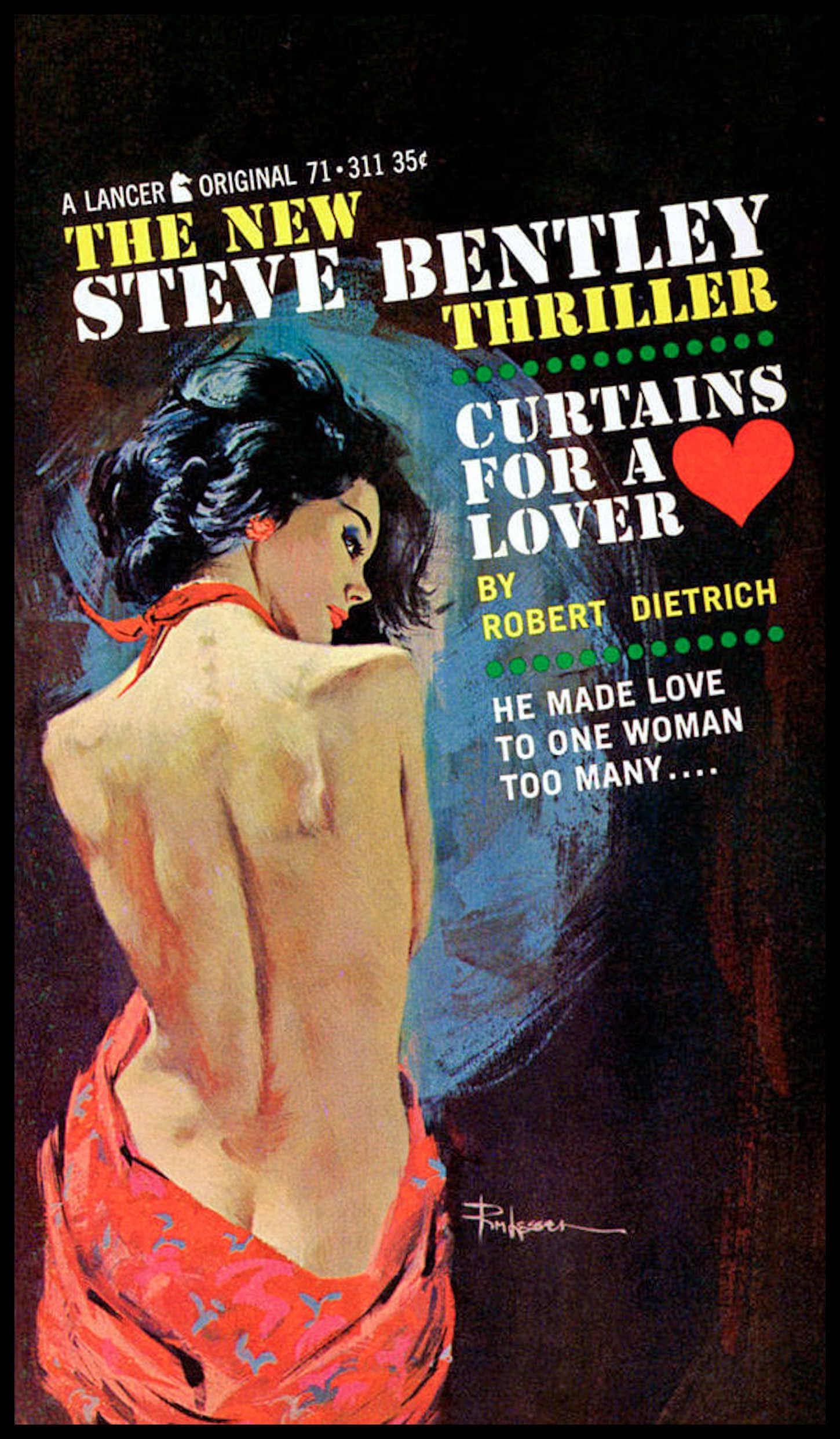 From 1959 to the 2000s, he created a mid-boggling number of PB cover paintings. He estimates that he did several thousand, for virtually all of the top paperback publishers.

Ron also did some artwork for men’s adventure magazines and many of his paperback cover paintings were recycled as MAM cover and interior illustrations.

Recently, I’ve been talking with Ron as research for a book featuring his paperback and MAM artwork. Wyatt Doyle and I hope to have it ready for publication later this year or early next year.

It will be the first book to showcase Ron’s artwork and a worthy addition to our previous art books POLLEN’S WOMEN: THE ART OF SAMSON POLLEN, POLLEN’S ACTION, MORT KÜNSTLER: THE GODFATHER OF PULP FICTION ILLUSTRATORS and ONE MAN ARMY: THE ACTION PAPERBACK ART OF GIL COHEN.

Check out the examples on his ArtByRonLesser.com website and be amazed! As you’ll see, in recent years, Ron has been doing a lot of portraits of famous beauties, like Marilyn Monroe and Bettie Page, and a series of “deadly dame” paintings that are essentially faux book cover paintings. They’re awesome! You can also see some of his original artwork on Heritage Auctions at this link.

For more info about Lesser, I recommend reading the in-depth interview with him that vintage paperback expert J. Kingston Pierce posted on his Killer Covers of the Week blog. There’s also a series of other posts on that blog that show more examples of Lesser’s classic crime and mystery covers.

Ron didn’t keep a written record of all of the thousands of illustrations he’s done over the past 50 years. So, I’m piecing together a list from a number of sources.

In course of doing that, I’m finding out about many books and books series he did cover art for that I was unaware of.

For example, I recently learned that Ron did most of the cover paintings for Gold Eagle’s 33 book SOBs series (SONS OF BARRABAS), written under the house name Jack Hild.

Below is an example I posted in the MAM Facebook group: Lesser’s original cover painting for SOBS #4: SHOW NO MERCY (1984) next to the book cover. Next to those is a scan of the cover of SOBs #13: NO SANCTUARY. 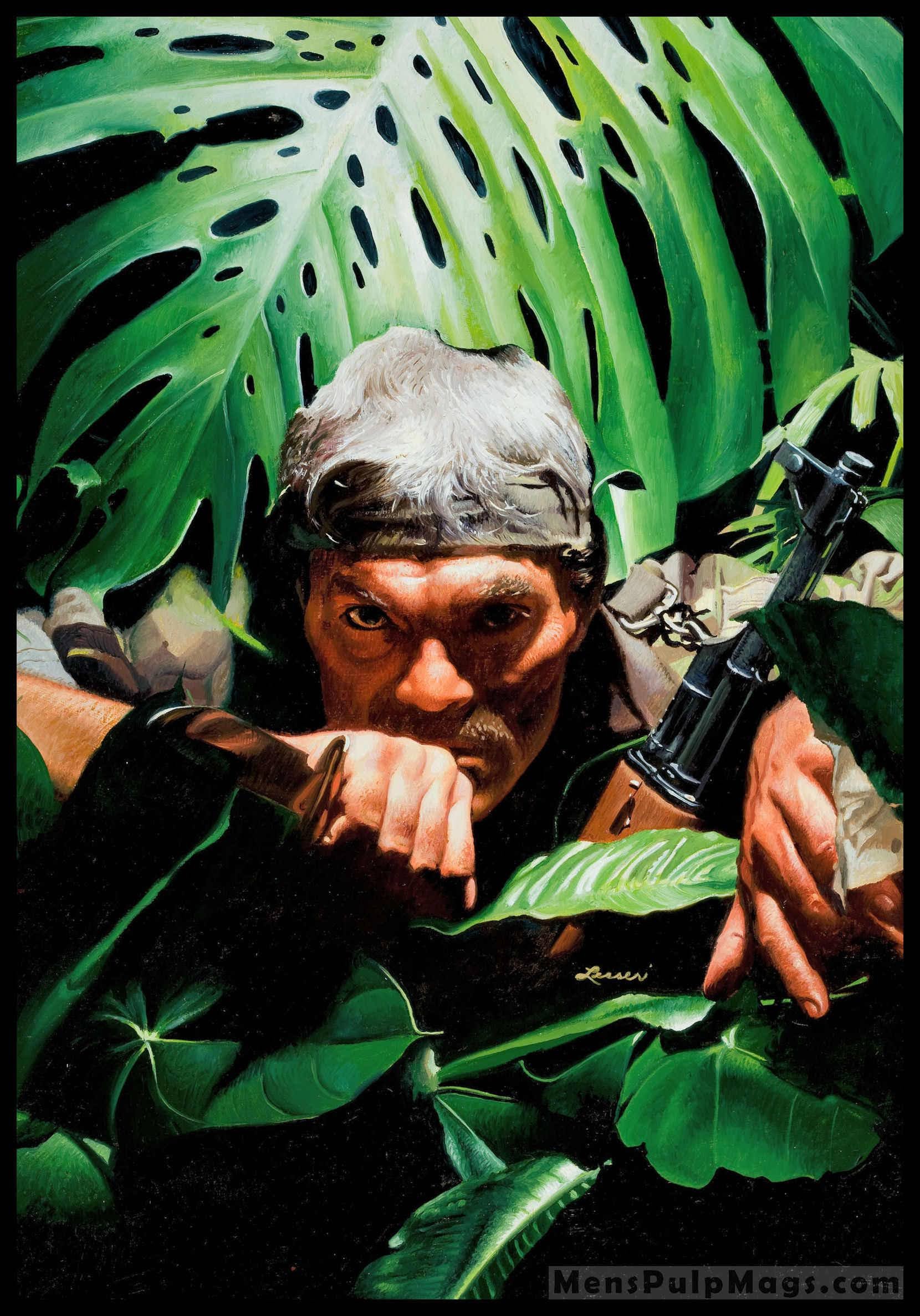 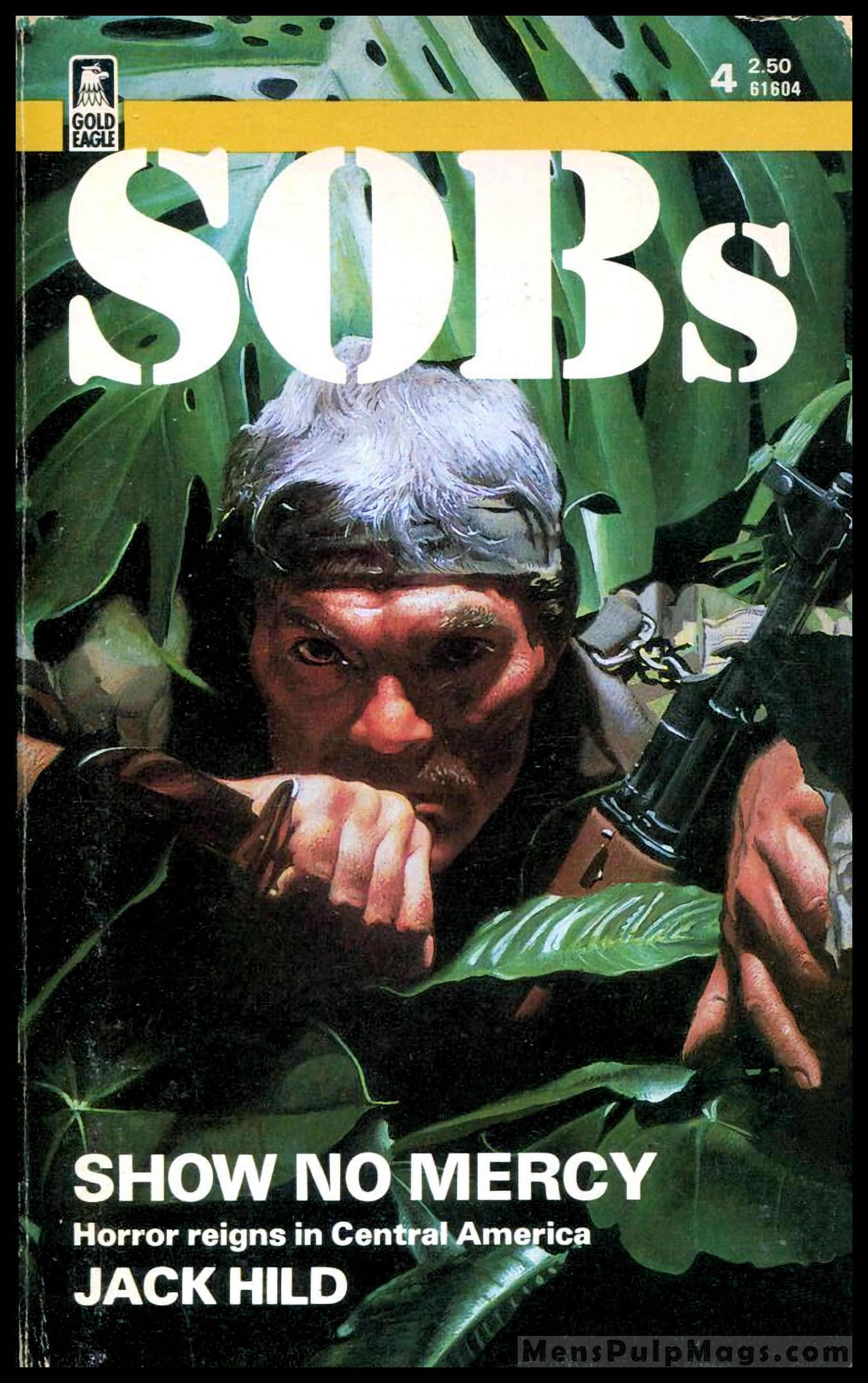 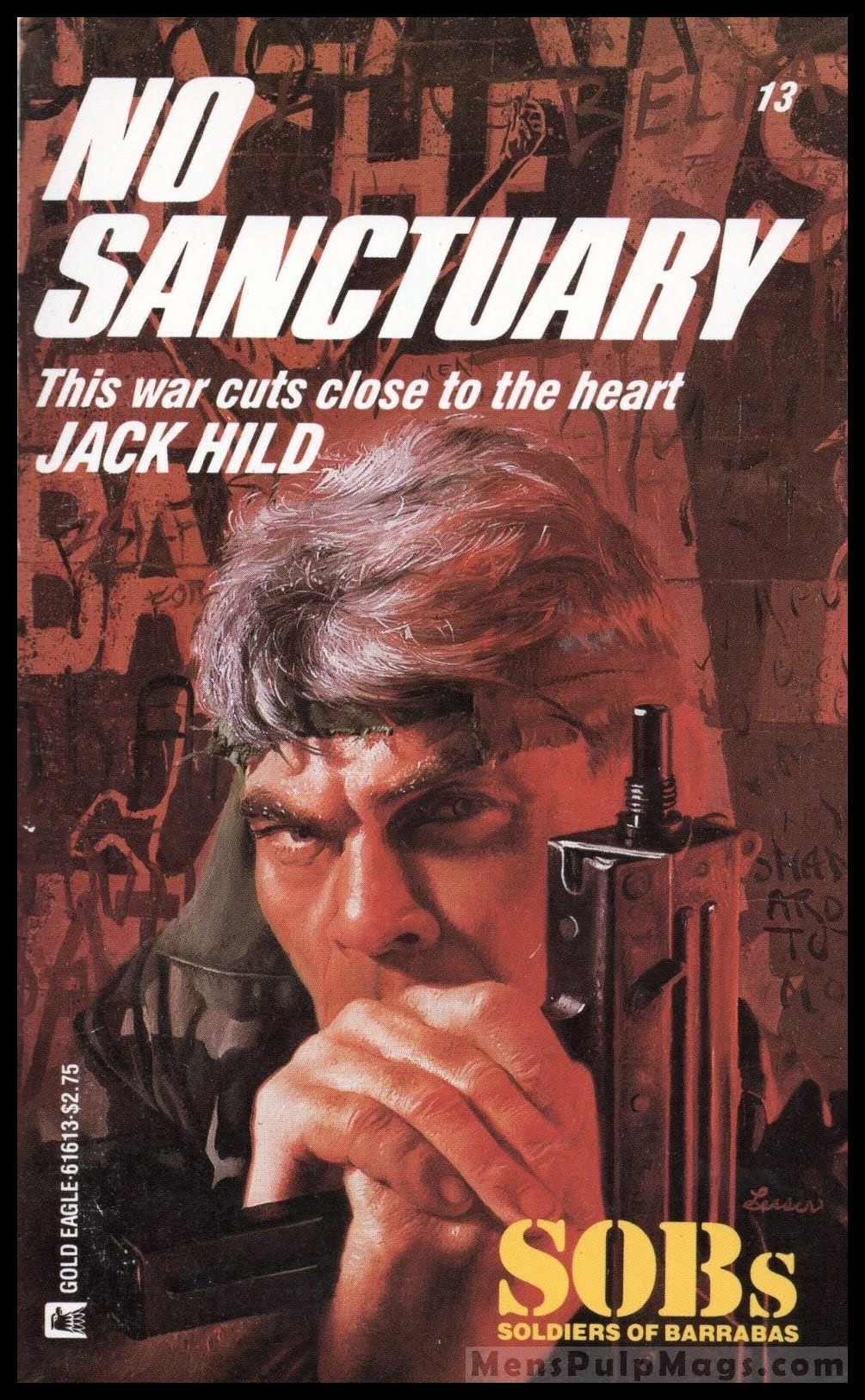 A while back, vintage paperback maven Tim Hewitt posted a scan of the cover of the Fawcett Crest 1975 edition of AFTER THE LAST RACE by Dean R. Koontz in the MAM Facebook group. More recently, I ran across Ron Lesser’s original cover art for that book on the Heritage Auctions site.

The book scan and painting are shown below. 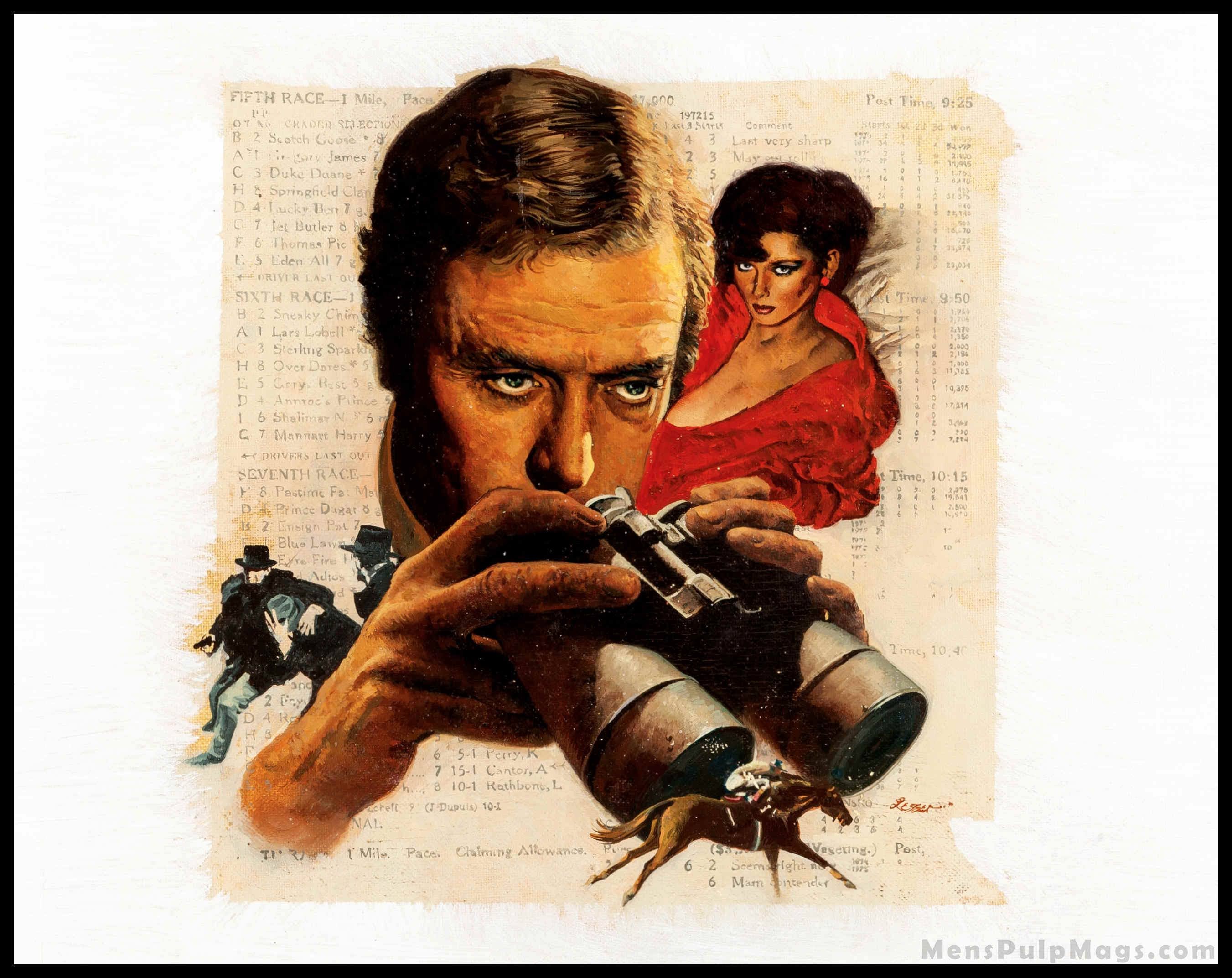 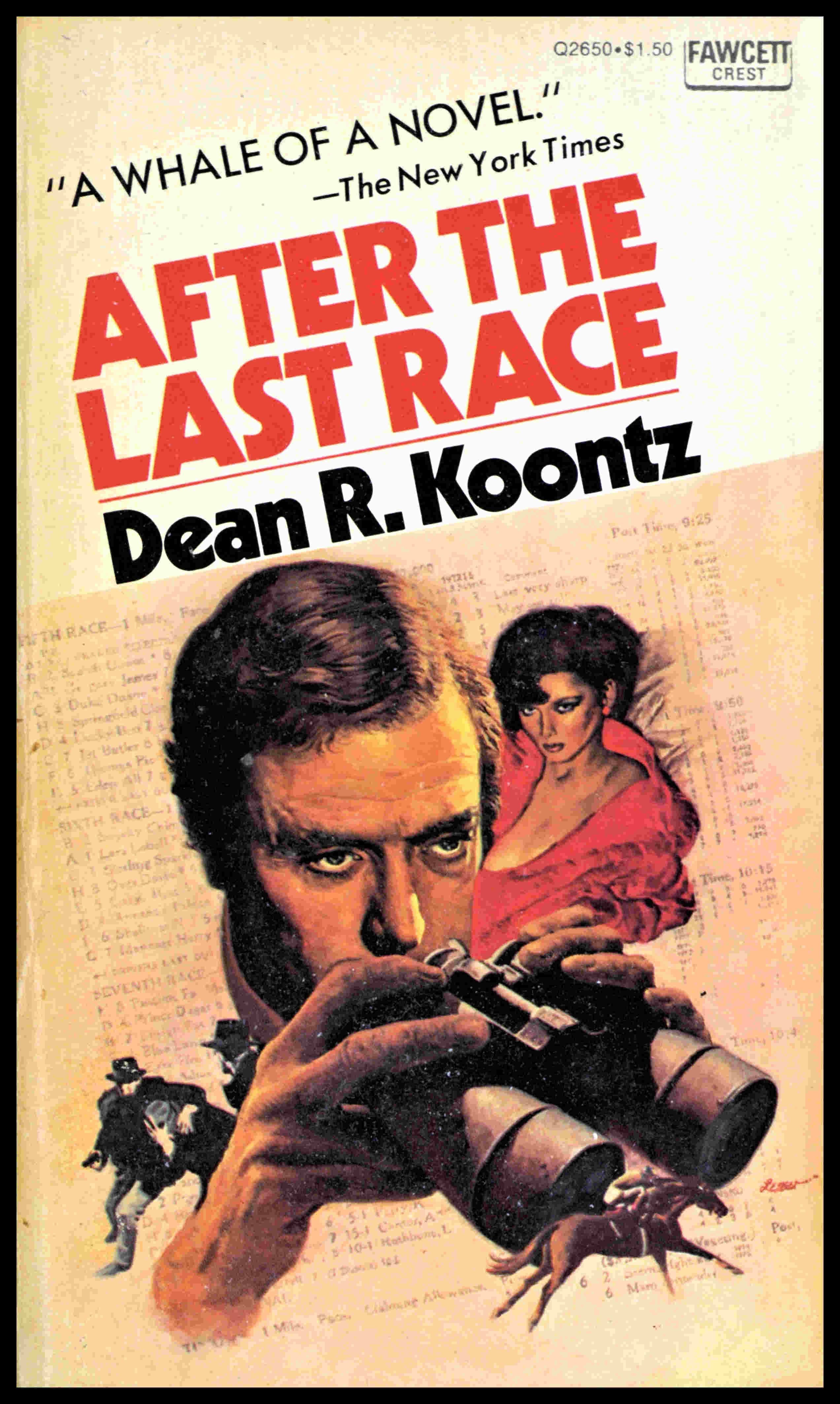 In another post in the group, I showed a photo of Ron’s cover painting for THE SHELL SCOTT SAMPLER, along with a scan of the cover.

In a comment, Tim Hewitt posted a scan of second use of that artwork, on the cover of the August 1973 issue of MIKE SHAYNE’S MYSTERY MAGAZINE. (For more about the Mike Shayne detective novels and “book bonus” versions published in men’s adventure mags, see my previous posts about them on this blog.) 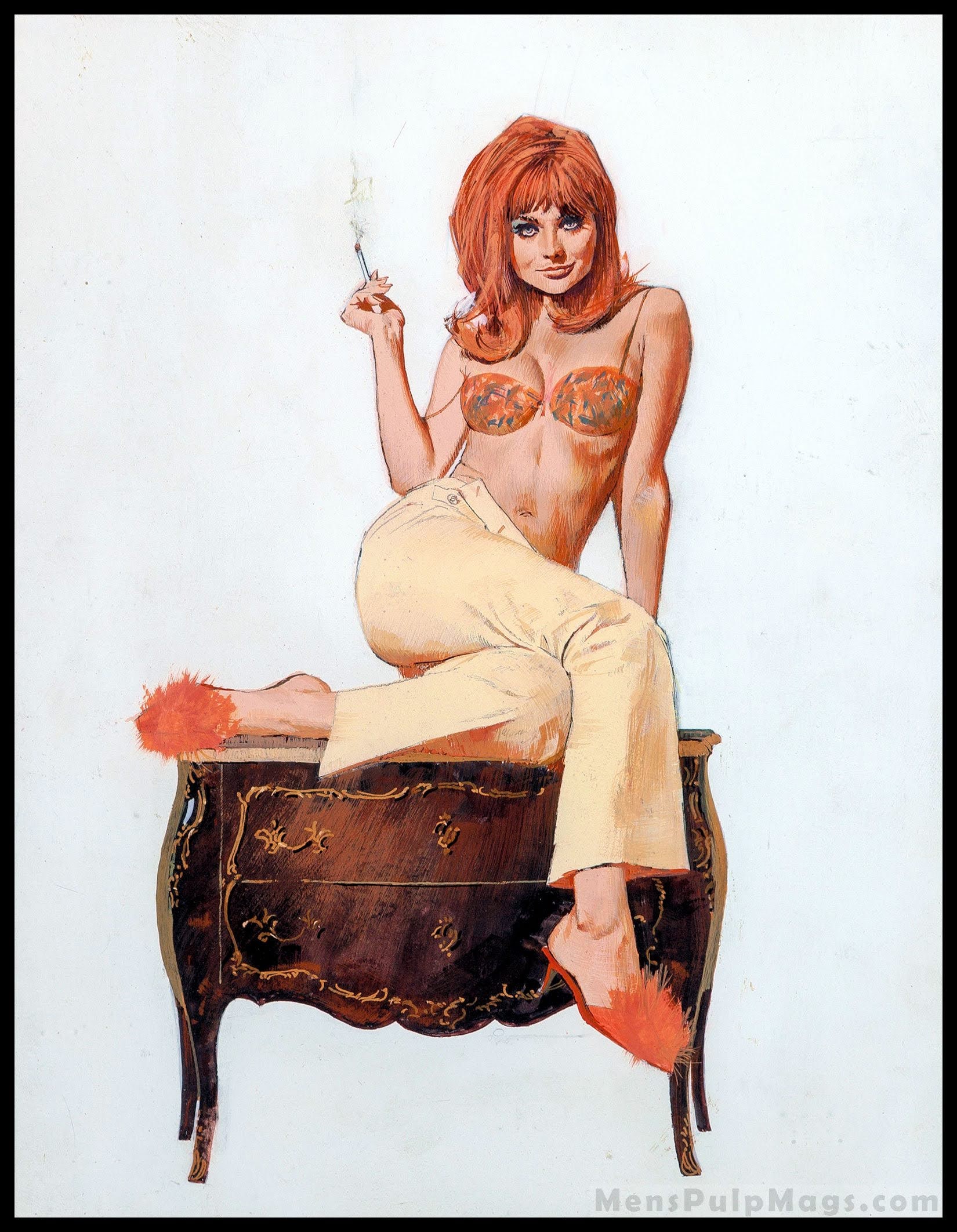 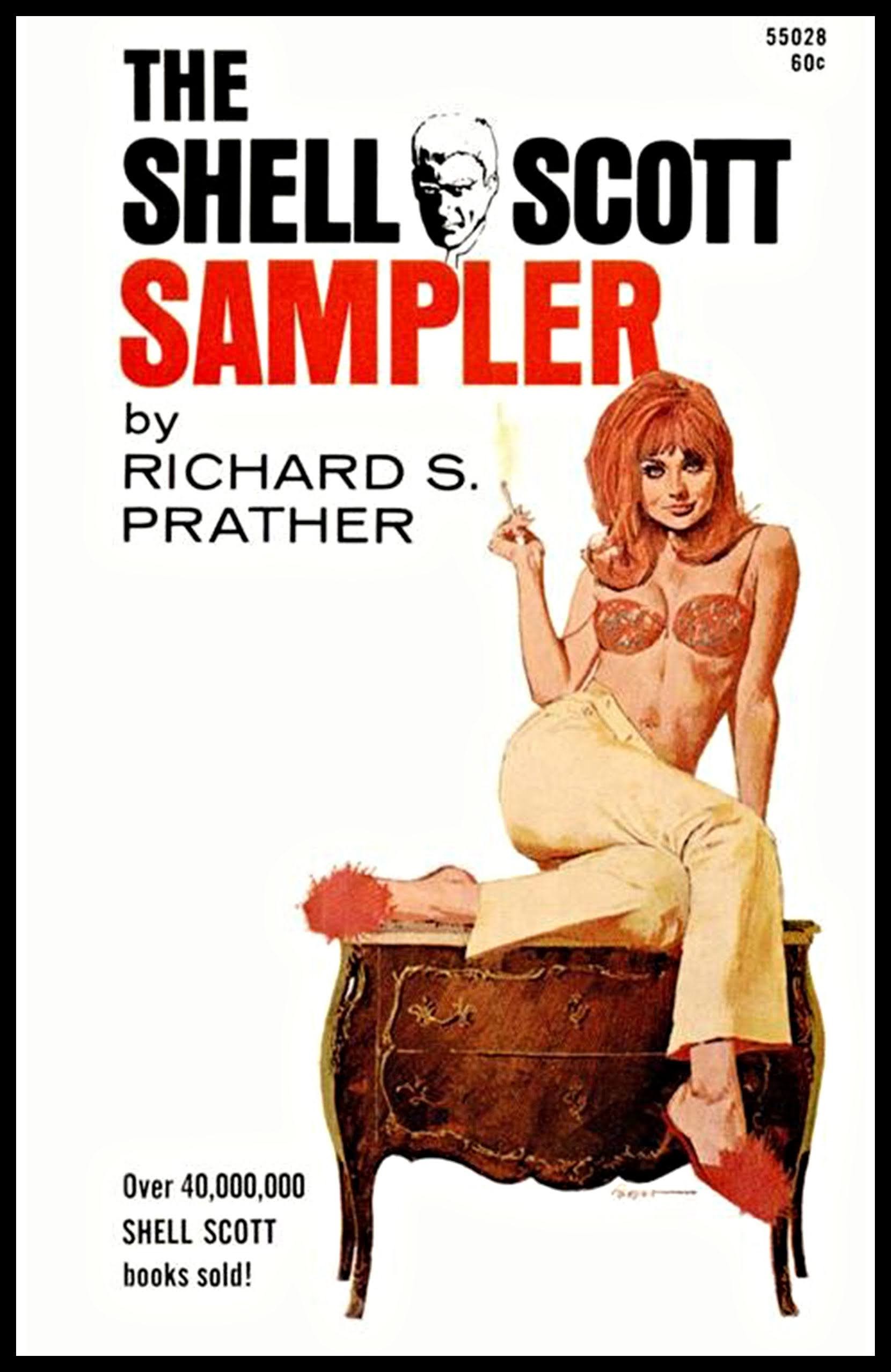 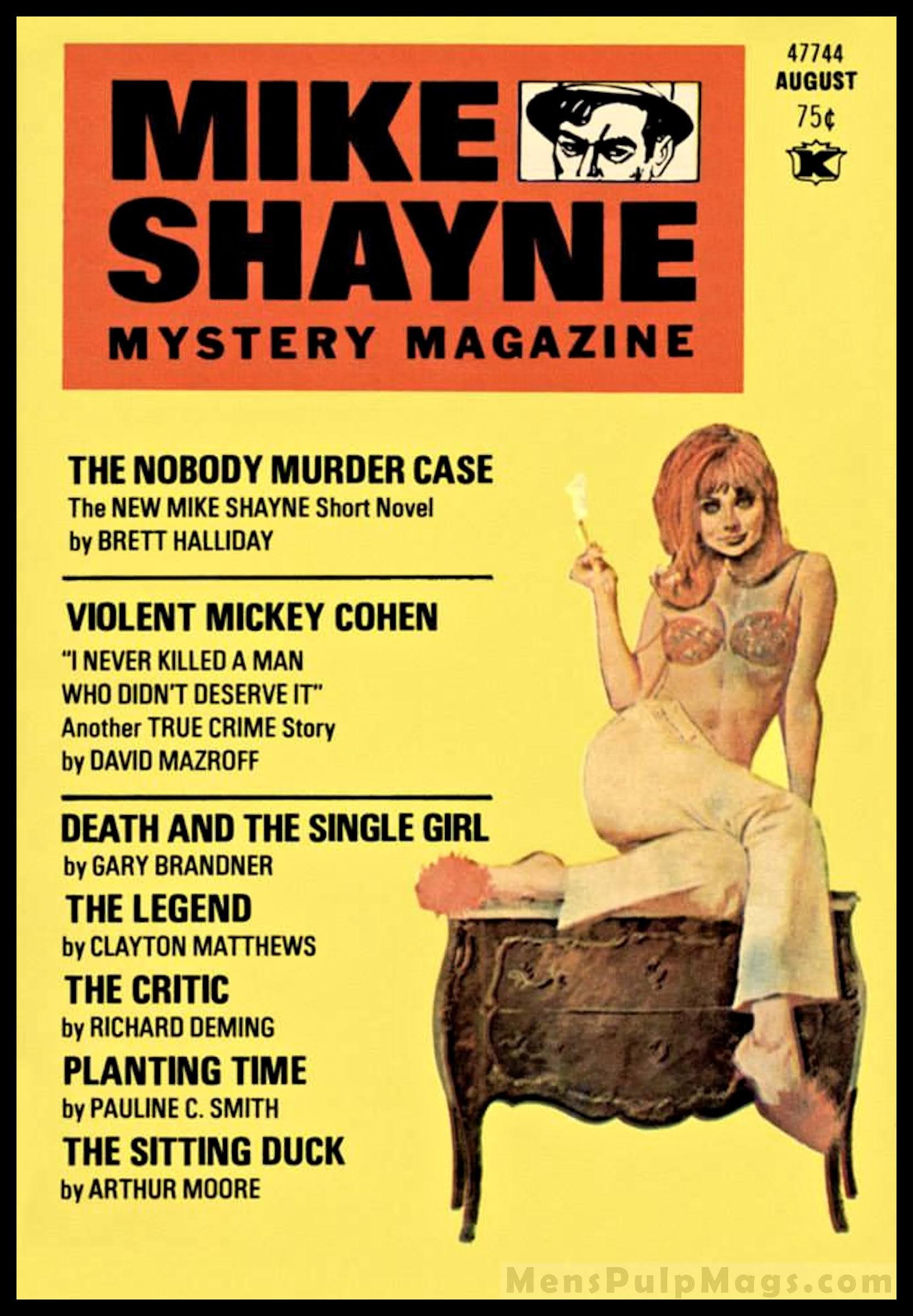 The MAM Facebook group is the first place I announce new projects I’m co-editing. One of those projects is the MEN’S ADVENTURE QUARTERLY magazine.

I wrote about the first issue in the Facebook group and in a previous post on this blog. That issue is subtitled “The Most Wanted Wild West Issue” because it features classic Western stories and artwork from men’s adventure magazines,

By the time you read this post, the second MEN’S ADVENTURE QUARTERLY issue, which features James Bond style espionage stories and artwork for MAMs, will be available for purchase on Amazon in the US and worldwide. I recently posted the scans below, showing the cover wrap of MAQ #2 (the back and front cover) and table of contents, in the MAM Facebook group. 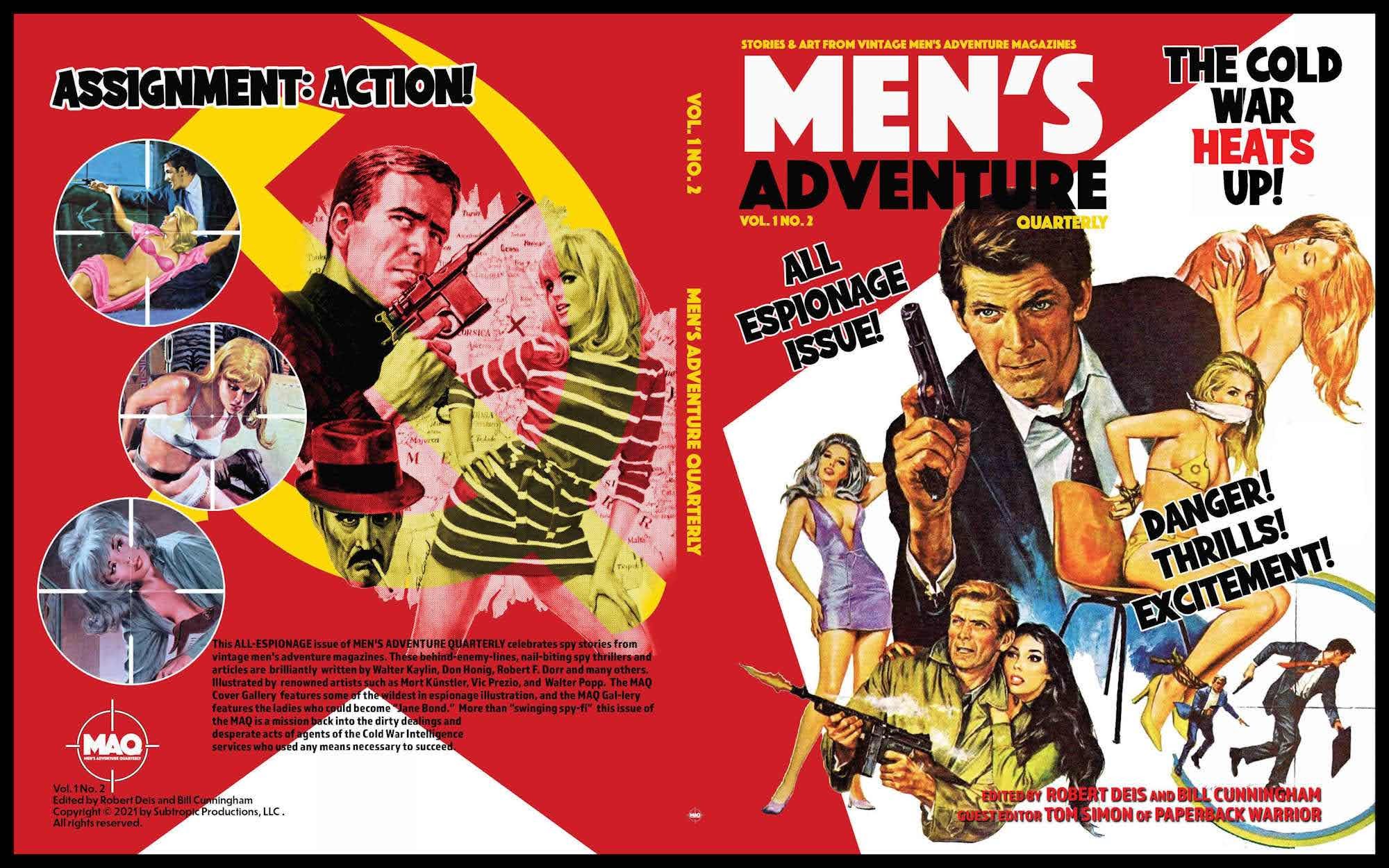 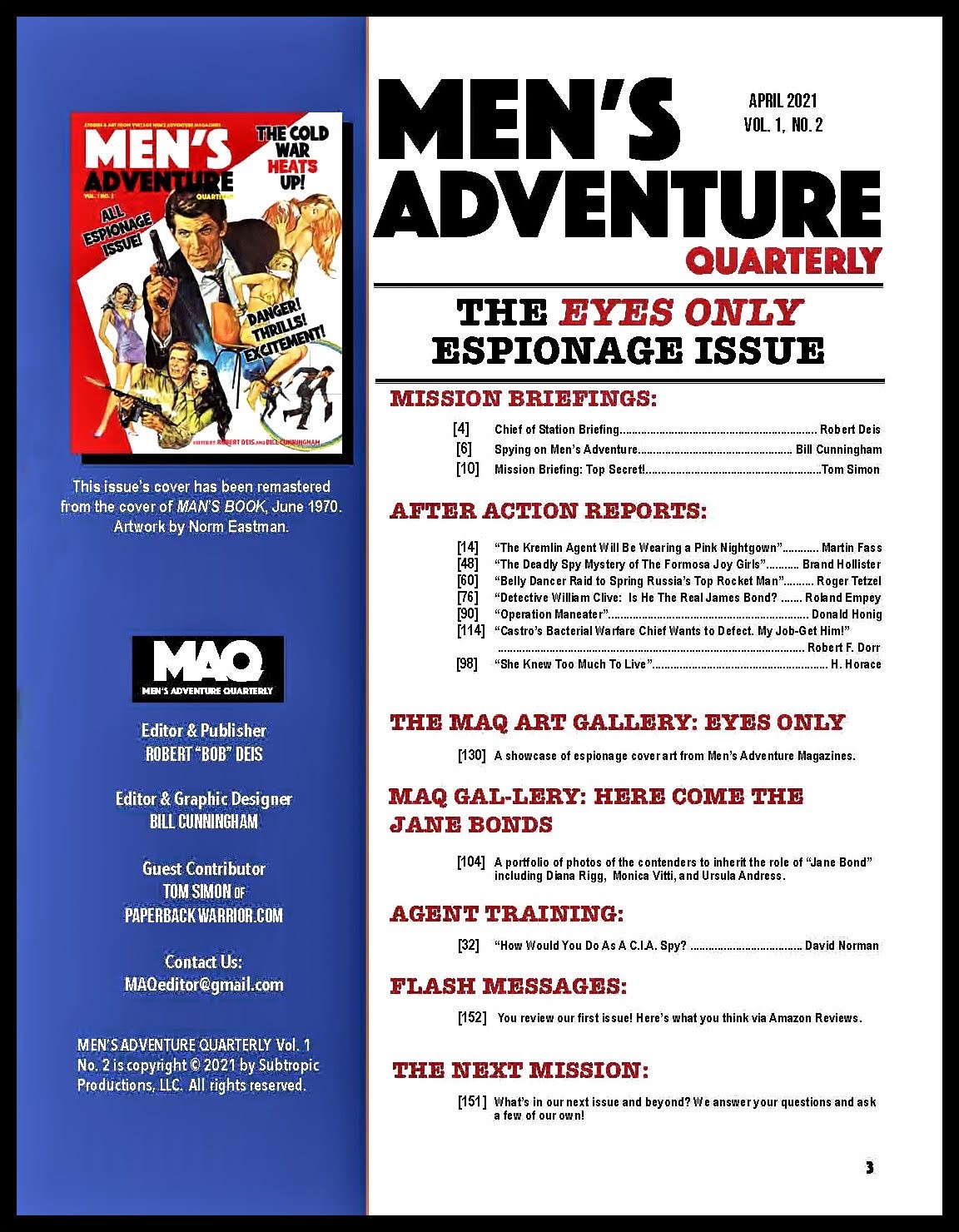 As I also recently announced in that group, my latest project with Wyatt Doyle, titled the EXOTIC ADVENTURES OF ROBERT SILVERBERG is now available for pre-order on Amazon. Silverberg is, of course, best known as one of the world’s most acclaimed writers of science fiction novels and stories. But most of Silverberg’s many science fiction fans are unaware that he also wrote fiction stories and “sexology” articles that appeared in MAMs in the ‘50s and ‘60s — some under his own name, most under pseudonyms.

Our EXOTIC ADVENTURES OF ROBERT SILVERBERG book collects action/adventure, crime and travel stories Bob wrote for the short-lived magazine EXOTIC ADVENTURES in 1958 and 1959. It’s a large format, 8 /12 x 11” book, lushly illustrated with the covers, interior illustrations and photos that went with those stories, and with a lot of the often eyebrow-raising advertisements that appeared in the six issues of EXOTIC ADVENTURES.

Here’s a look at the cover of the hardcover edition of the Silverberg book and two pages that show what the book cover is adapted from, using a cool drawing of Bob Silverberg by our friend, artist and musician Jimmy Angelina, used in place of the guy holding the gun in the EXOTIC ADVENTURES cover. (You can see more of Jimmy’s terrific artwork in two books he created with Wyatt Doyle, THE LAST COLORING BOOK and THE LAST COLORING BOOK ON THE LEFT, available on Amazon worldwide. You can also listen to his self-titled music album streaming on Amazon at this link.) 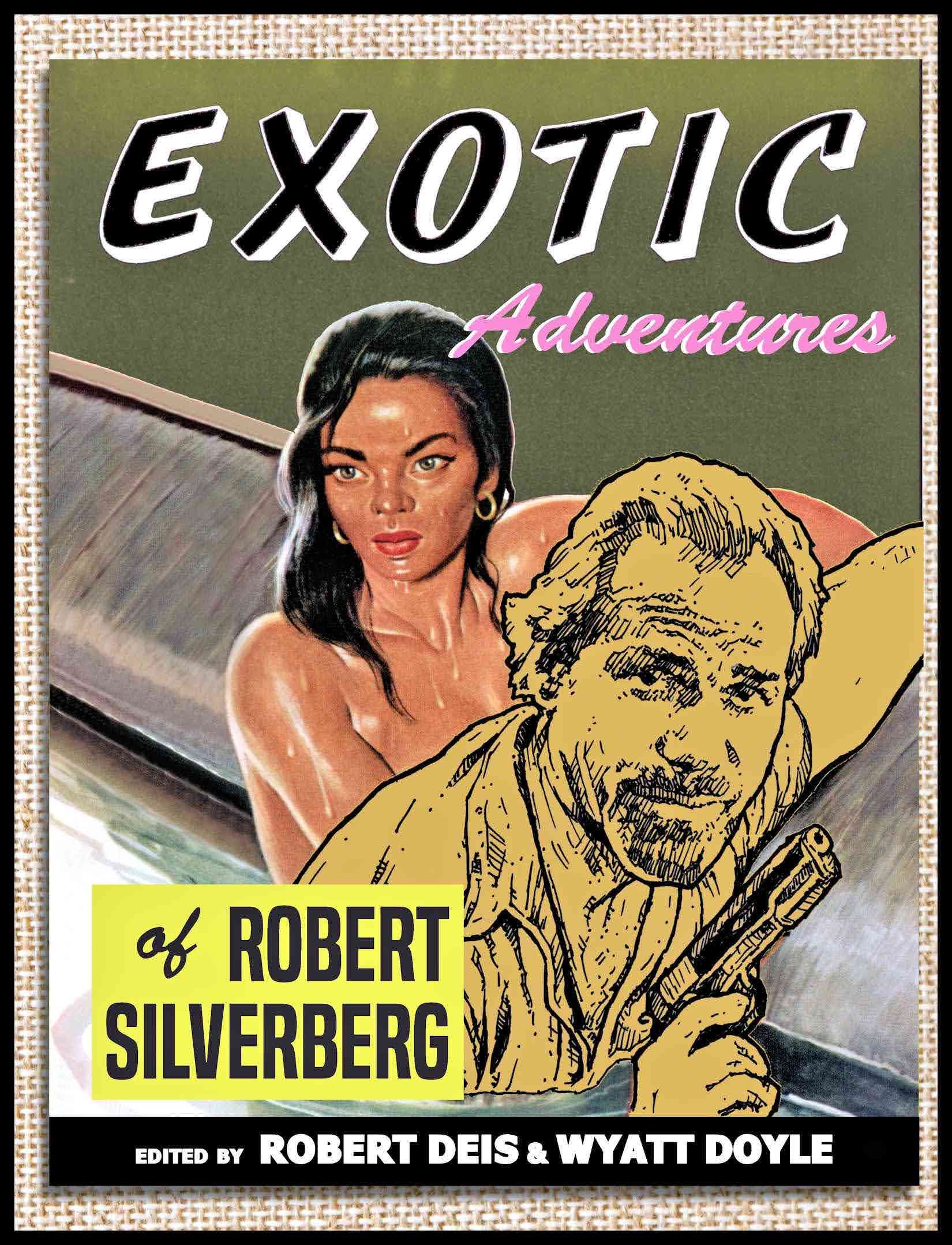 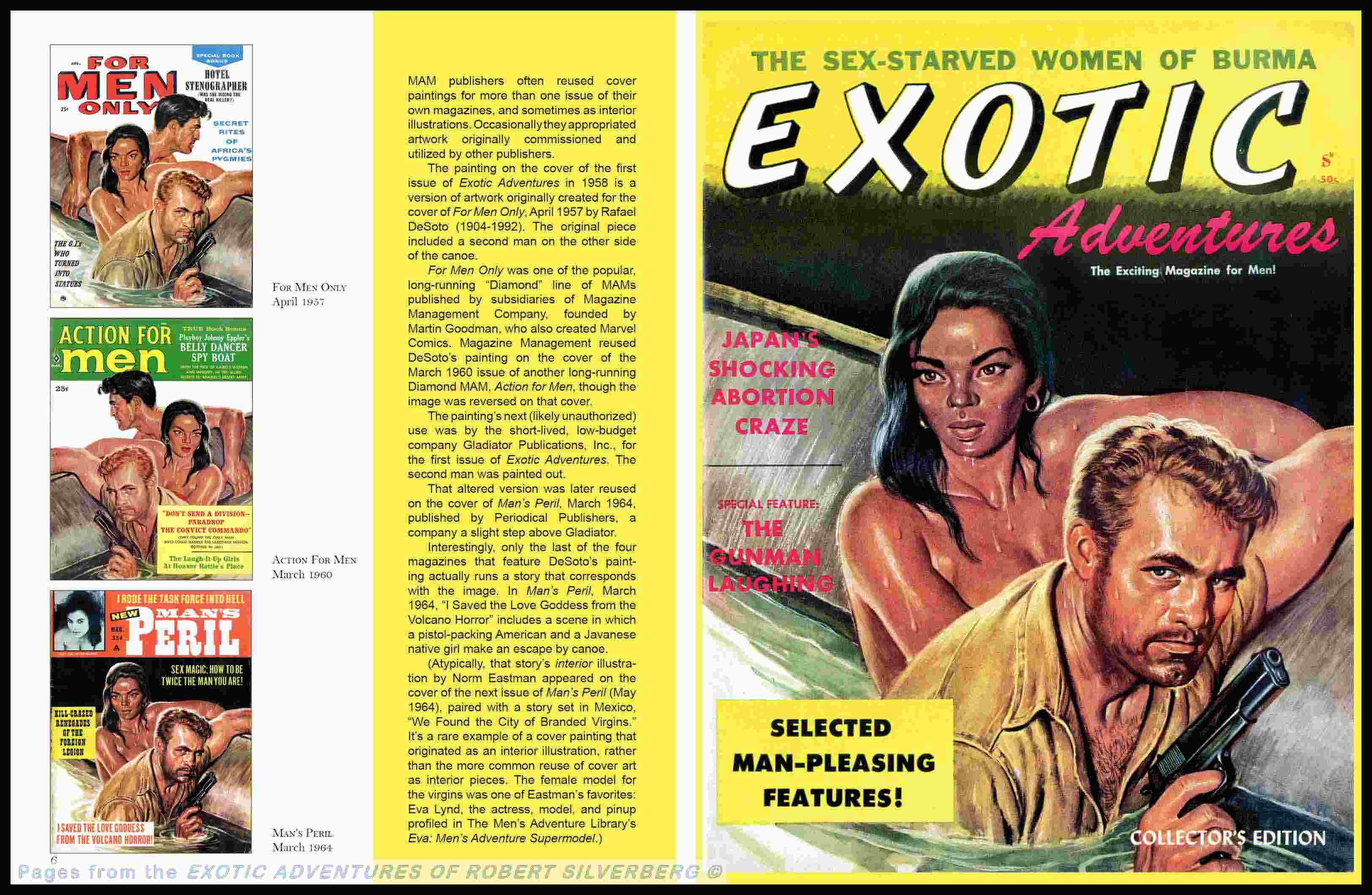 As we explain in the text in these pages of the book, the 1958 EXOTIC ADVENTURES cover is an altered version of a cover painting by the great pulp mag, MAM and paperback artist Rafael DeSoto. That painting was originally used on the cover of FOR MEN ONLY, April 1957. The original piece included a second guy on the other side of the canoe.

I’ll be posting previews of the Silverberg book and the MEN’S ADVENTURE QUARTERLY #2 here in the near future. In the meantime, if you want to see daily posts about men’s adventure magazines and paperbacks and be among the first to hear about new books in those genres, join the MAM Facebook group if you haven’t done so already.