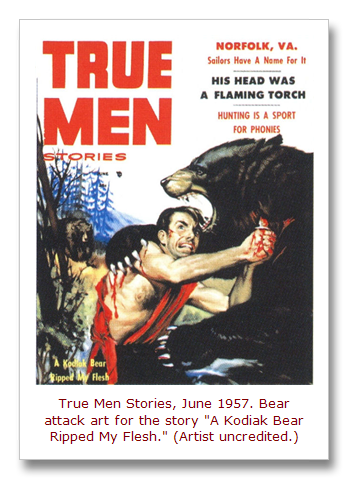 Man vs. beast was a common theme in the stories and art in men’s adventure magazines of the 1950s, 1960s and early 1970s. And, the bigger the beast, the better when it came to the perceived manliness of fighting or killing them.

So, bears were a popular topic.

Personally, I am not a fan of Ernest Hemingway-style “big game hunting,” since it often seems more like big game slaughter to me.

But I am a huge fan of the animal attack paintings that were common on men’s adventure magazines. No animals were harmed in the making of the paintings — and they are just damn cool!

I’ve done some previous entries here about other animal-related subgenres, like the “snake menace subgenre”.

For this first entry about the “bear attack subgenre,” I’m including an exclusive reprint of my favorite killer bear story from a men’s adventure magazine.

The story is titled “‘GHOST’ BEAR THAT TERRORIZED A TOWN.” It’s a rogue polar bear tale written by Robert F. Dorr and first published in the February 1975 issue of Male magazine.

As you may know if you’re a reader of this blog, Bob Dorr is now a popular and highly regarded military historian.

His latest book is the critically acclaimed Hell Hawks!: The Untold Story of the American Fliers Who Savaged Hitler’s Wehrmacht — which he co-wrote with former U.S. astronaut Thomas D. Jones.

But in his younger days, Bob was one of many writers who honed their craft — and made ends meet — by writing stories for men’s adventure magazines.

When I asked Bob for permission to reprint his “Ghost Bear” story, he said: “Did I really write about a ghost bear?” 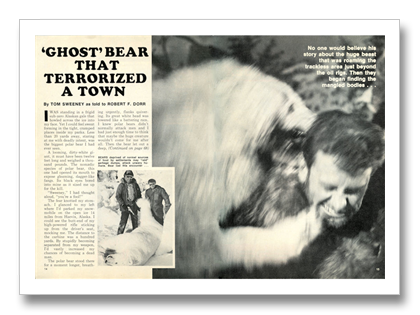 He chuckled when I sent him a copy to “prove” it and noted that, in those days, he wrote many types of stories for many different magazines.

Bob even wrote stories for True Confessions-style magazines in the late 1950s and 1960s — in the first person, using women’s names as pseudonyms. (The legendary author, editor and screenwriter Harlan Ellison recently told me he did, too.)

Like most stories in the vintage confession magazines and many of the “true stories” in men’s adventure magazines, Bob’s “Ghost Bear” yarn is fictional.

But, unlike other animal attack stories from the men’s adventure genre, Bob’s shows unusual respect for the bear involved — which is one of the reasons I particularly like it.

I won’t spoil the plot for you. I’ll let you read it yourself, by clicking on this link and downloading it in PDF format.

Bob’s bear story is illustrated with photos rather than artwork. So, to give you the flavor of the bear attack cover paintings from men’s adventure magazines, I’ve posted a few of my favorites in this entry.

At the upper left of this post is a cover with a bear variation on the famed “Weasels Ripped My Flesh” headline.

It’s the June 1957 issue of True Men Stories magazine. The great bear attack painting, by an uncredited artist, is for the story “A Kodiak Bear Ripped My Flesh.” (Yes, “Ripped My Flesh” was a popular headline phrase in men’s adventure magazines.)

The True Adventures cover painting is by artist Frank Cozzorelli. The others are uncredited. 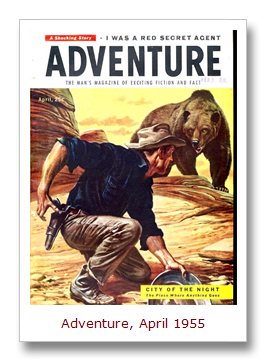 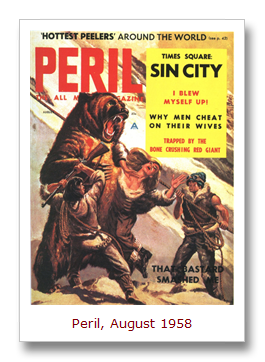 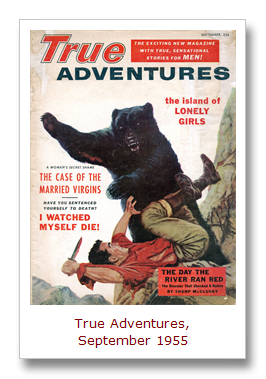 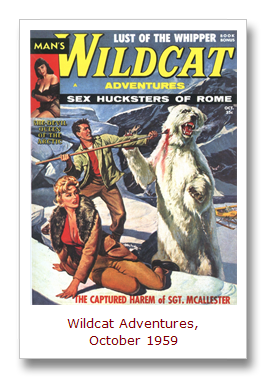 Thanks again to Bob Dorr for his permission to reprint his copyrighted “Ghost Bear” story. I hope to post more of Bob’s stories here in the near future, as well as some more bear attack art.

R.I.P. Charlie “Angelo” Liteky: a man of courage and conviction in wartime and after…