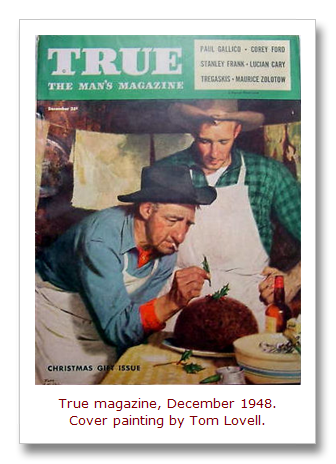 But there are some that managed this combination beautifully.

One example is the cover of the December 1948 issue of True magazine.

True, published by Fawcett Publications for most of its long run, was one of the more upscale and mainstream men’s adventure magazines, along with Argosy and Saga. It was first published in 1937 and continued until 1975.

The superb cover painting on the December 1948 issue is by Tom Lovell (1909-1997). Lovell was a New York artist who particularly liked Western subjects. Eventually, he focused primarily on Western-themed paintings and moved to New Mexico.

The cowboy bunkhouse Christmas scene he painted for the cover of the December ‘48 issue of True manages to be sentimental and manly at the same time.

But lest you get any funny Brokeback Mountain type ideas, note that the subtitle of True at the time was “The Man’s Magazine.” Which didn’t mean “girly man,” bub. No, siree.

This subtitle was changed to the “#1 Man’s Magazine” in the 1960s. And, indeed, in its heyday, True’s circulation exceeded one million copies.

Bruce Jay Friedman, the former editor of Male magazine who later became a famed novelist and playwright, explained the hierarchy of men’s adventure magazines this way in his book, Even the Rhinos Were Nymphos:

“High above all others, at a lonely, nosebleed-producing altitude, stood the mighty True, which had achieved its status through newsbreaking revelations about hanky-panky in the conduct of World War II. Several notches below, but sturdy nonetheless, was a slick-looking Western cuspidor of a magazine called Argosy. There followed, at least in terms of ‘classiness’ — if not circulation — Saga; and then, after a bit of a leap and a bound, one reached the nether world of the Goodman books* (as our magazines were referred to at the time), Male, Stag, For Men Only, Man’s World, Action for Men, True Action, and so on. By no means did Magazine Management represent the end of the line. There were legions of other titles that generally featured Gestapo women prancing around captive Yanks in leg shackles. When the men’s field met local opposition, the broom used was generally a large one and we were miffed at being swept off the newsstands along with the leg schacklers.”

As Friedman notes, Argosy — like True — was a top-tier men’s adventure magazine. It began as a classic digest-sized pulp mag in 1882, more as a boy’s magazine than a man’s. Over the decades, it “grew up,” both in size and content. It went to normal magazine size in 1941, and focused on an adult male audience that liked adventure, action, war stories and hunting topics.

Argosy used painted covers until the 1960s, then switched to photos. The two Argosy covers below are from December 1963 and December 1964. They each feature a highly creative, painterly Christmas-theme photo taken by photographer Arie De Zanger. 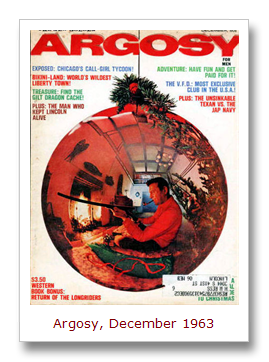 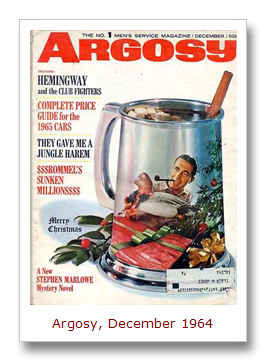 At the risk of seeming unmanly, and politically correct and incorrect all at the same time, I wish those of you who are reading this blog Happy Holidays, Merry Christmas, Happy Hanukkah, Happy Kwanzaa and Happy New Year!