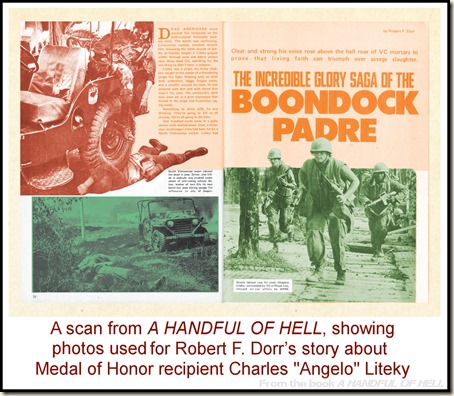 One of the stories by the late military historian Robert F. Dorr featured in A HANDFUL OF HELL, our collection of Bob’s classic men’s adventure magazine stories, is about Charles “Angelo” James Liteky.

Liteky was an Army Chaplain during the Vietnam War.

He was awarded the Medal of Honor in 1969 for his “exceptional heroism” in saving the lives of dozens of wounded American soldiers during a bloody battle near Phuoc-Lac on December 6, 1967.

When Liteky died on January 27, 2017 at age 85, the major focus of the obituaries about him was the fact that he gave back his medal in 1986 to protest the Reagan administration’s support for right wing dictators and “Contras” in Nicaragua and El Salvador and became a prominent peace activist.

He was the first, and so far the only, Medal of Honor recipient who has returned the medal.

A few years before that Liteky had left the priesthood as a protest against the Catholic Church’s celibacy requirements and married former nun Judy Balch.

Later acts of protest against US policies in Central America landed Liteky in federal prison for six months in 1990 and for a year in 2000.

In 2002 and 2003, he traveled to Baghdad with other peace activists opposed to the U.S. invasion of Iraq.

Given all that, I suppose it’s not surprising that Liteky’s obituaries generally gave more attention to his controversial acts of political protest than to the acts of bravery that earned him a Medal of Honor during the Vietnam War.

But the story behind his medal is awe-inspiring. 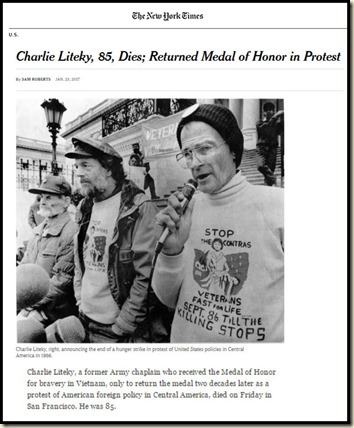 There’s an official citation explaining what he did on his page on the Medal of Honor website, as there are for other recipients.

It’s listed under the name he used in the service, Angelo J. Liteky.

The story of his bravery is provided in a fairly dry way, formatted as a single paragraph.

Nonetheless, the basic facts in it are jaw-dropping.

Chaplain Liteky distinguished himself by exceptional heroism while serving with Company A, 4th Battalion, 12th Infantry, 199th Light Infantry Brigade. He was participating in a search and destroy operation when Company A came under intense fire from a battalion size enemy force. Momentarily stunned from the immediate encounter that ensued, the men hugged the ground for cover. Observing 2 wounded men, Chaplain Liteky moved to within 15 meters of an enemy machine gun position to reach them, placing himself between the enemy and the wounded men. When there was a brief respite in the fighting, he managed to drag them to the relative safety of the landing zone. Inspired by his courageous actions, the company rallied and began placing a heavy volume of fire upon the enemy’s positions. In a magnificent display of courage and leadership, Chaplain Liteky began moving upright through the enemy fire, administering last rites to the dying and evacuating the wounded. Noticing another trapped and seriously wounded man, Chaplain Liteky crawled to his aid. Realizing that the wounded man was too heavy to carry, he rolled on his back, placed the man on his chest and through sheer determination and fortitude crawled back to the landing zone using his elbows and heels to push himself along. pausing for breath momentarily, he returned to the action and came upon a man entangled in the dense, thorny underbrush. Once more intense enemy fire was directed at him, but Chaplain Liteky stood his ground and calmly broke the vines and carried the man to the landing zone for evacuation. On several occasions when the landing zone was under small arms and rocket fire, Chaplain Liteky stood up in the face of hostile fire and personally directed the medivac helicopters into and out of the area. With the wounded safely evacuated, Chaplain Liteky returned to the perimeter, constantly encouraging and inspiring the men. Upon the unit’s relief on the morning of 7 December 1967, it was discovered that despite painful wounds in the neck and foot, Chaplain Liteky had personally carried over 20 men to the landing zone for evacuation during the savage fighting. Through his indomitable inspiration and heroic actions, Chaplain Liteky saved the lives of a number of his comrades and enabled the company to repulse the enemy. Chaplain Liteky’s actions reflect great credit upon himself and were in keeping with the highest traditions of the U.S. Army.

Robert F. Dorr’s story about what Liteky did that day is a helluva lot more intense and dramatic.

It’s titled “THE INCREDIBLE GLORY SAGA OF THE BOONDOCK PADRE.”

The story was originally published in the October 1970 issue of MAN’S ILLUSTRATED.

MAN’S ILLUSTRATED was one of the longest-running men’s adventure magazines. It ran from 1955 to 1975 and featured artwork by many of the top illustrators who worked for the men’s adventure genre. (For example, the cover of the October 1970 issue was done by the great Mel Crair.)

Many of the stories in MAN’S ILLUSTRATED are wild and crazy. But a good percentage of those are gloriously wild and crazy and some issues include more serious hidden gems like Bob Dorr’s well-written, well-researched story about what Liteky did to earn the Medal of Honor on December 6, 1967. 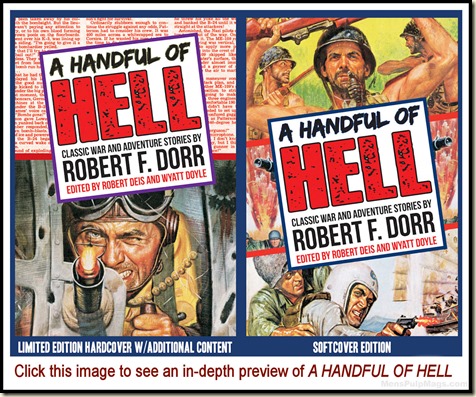 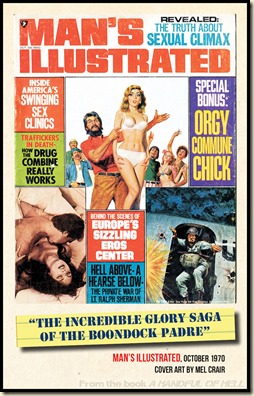 Bob’s story includes details that add depth and color to what happened that day, such as the fact that Liteky was unwilling to carry or shoot a weapon.

During the battle that earned him the Medal of Honor, Liteky walked, ran and crawled unarmed through a battlefield swarming with North Vietnamese troops, making his way through a hail of bullets and explosions to reach wounded American GIs.

Here’s an excerpt from Dorr’s account that vividly describes Liteky’s situation and decisions:

“Haunted by the screams of the wounded, Liteky rolled over on his belly to glimpse Red troops moving through nearby trees. He lifted the M-16 and slipped his finger through the trigger guard. His hands trembled. The North Vietnamese disappeared before he could take aim.
It was no good. Father Liteky shook his head, tears streaming down his cheeks. He couldn’t fire. 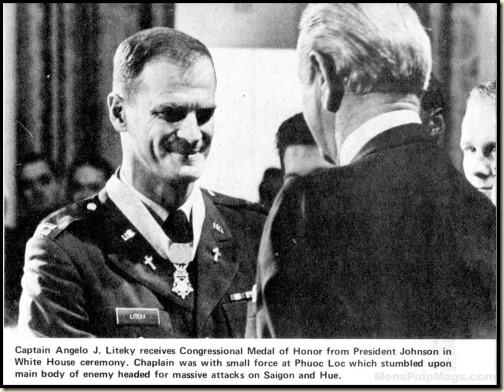 “My God, can’t somebody help us? Somebody, anybody, please help!”
What am I doing? Liteky wondered, staring open-mouthed at the unfamiliar M-16. He’d never fired one, not even on a firing range. This isn’t for me, he thought. It’s not my way.
A man of the church, not a killer, the priest listened to the screams of the wounded and made an abrupt decision that came from the depth of his character. Purposely, he tossed the M-16 aside and watched it drop into the dust.
A burst of Red gunfire kicked up geysers of dirt in front of him as he propped on his elbows, steadied himself, and started to his feet.
“Hey, sir! Get down! You’re a perfect target!”
Liteky came erect to the limit of his six-feet-one, glanced sideways at Red shells pounding down latex trees only feet away, then started for the gully ahead. Now he was thinking clearly, he told himself. His duty was with those three wounded.
“Father, you’re out of your mind! They’re dumping more rockets on us!”
“Hey, chaplain, take cover! Get down or they’ll hit you! This isn’t your fight!”
“It is now!” Liteky didn’t care whether the protesting GIs heard him or not. “If you want to do something, cover me! I’m going up to those three guys!”
“Those men are dying! You can’t help them!”
Liteky ignored the shouts and bolted forward, Red bullets fanning the air around him. A lonely figure moving in a bent, runner’s stance, he was a blur against a backdrop of jungle where muzzle flashes blinked as he sprinted through criss-crossing bursts of flying steel. GIs who watched felt sure he was committing suicide.
But Angelo J. Liteky was thinking only of the personal thing inside, his own idea of a duty higher than any the U.S. Army had assigned him. The roar of enemy guns clogging his ears, he ran in a quickening, deliberate stride—unarmed, uninterested in the living hell of gunfire around him, and unconcerned that he was laying his life right on the line.”

That’s just a glimpse of Bob Dorr’s great story about how Liteky got a Medal of Honor.

You can read the rest by buying a copy of A HANDFUL OF HELL. It’s available on Amazon worldwide. I also sell copies of HANDFUL and other books in our Men’s Adventure Library series at a special discount on eBay.

They’re signed by me as editor, not by Bob Dorr. Unfortunately, Bob passed away last year not long after my co-editor Wyatt Doyle and I worked with him to publish the book.

Prior to his death, I talked with Bob fairly often by phone. I miss him a lot. If he were still around, I would have called him to hear his thoughts on the obituaries for Charlie “Angelo” Liteky.

Bob was well aware that Liteky became controversial after he transformed from a war hero into a peace activist.

He’d been criticized by some observers — including some other Medal of Honor recipients — for returning his medal. He also took flak for speaking out against US policies and activities in Central America, even though the Iran-Contra scandal and investigations into the atrocities committed in Nicaragua and El Salvador now seem to support his position. 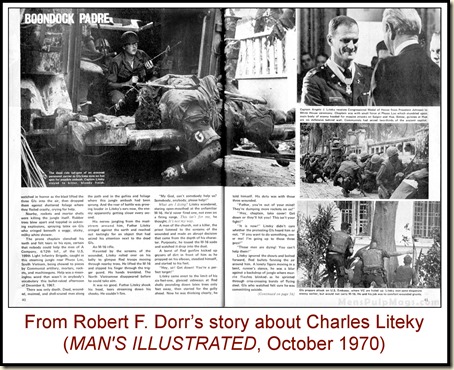 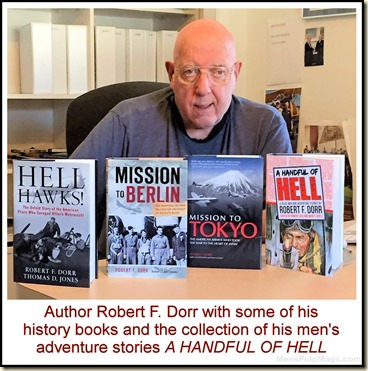 In an interview in 2000, Paul Bucha, past president of the Medal of Honor Society and a medal recipient, said:

“When I look at Liteky, I have respect for the courage of his views. It’s difficult to be an iconoclast. It’s much easier to go along. Men like Liteky are people who should force us to pause and think; they should not be ostracized and criticized. They are entitled to their views, and perhaps if we listened we’d be better off.”

I know Robert F. Dorr, who was a military veteran and a former senior diplomat with the State Department as well as a writer and military historian, also respected both Liteky’s bravery in war and his later political stands.

In the introduction Bob wrote for our reprint of the story “THE INCREDIBLE GLORY SAGA OF THE BOONDOCK PADRE,” he said:

“For his heroic efforts to save wounded American soldiers in 1967, he received the Medal of Honor. After the war, he continued to be a man of indomitable courage and strong convictions.”

R.I.P. to an American hero.