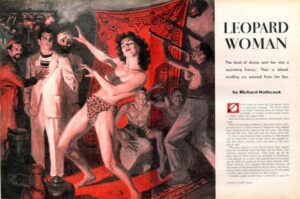 Robert A. Maguire, often credited as R.A. Maguire, was among the best and most famous of many talented illustration artists who did artwork for men’s magazines and pulp paperback novels in the 1950s, 1960s and 1970s.

As noted in the bio on the American Art Archives website, Maguire also painted greeting card art at one point in his long career, as well as a limited number of movie posters, album covers and magazine illustrations. 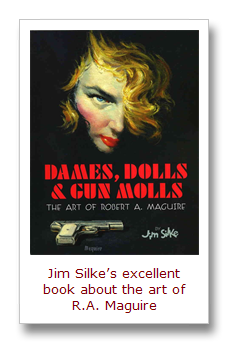 The American Art Archives site is one of the best resources online for fans of vintage illustration.

It’s maintained by illustration maven and writer Thomas Clement and his wife Christiane, whose eBay store is one of the best sources of collectible issues of vintage men’s adventure magazines.

In his bio of Maguire, Clement notes:

“Maguire’s paperback covers sold books far more than the books’ authors or titles. His ability to capture a sexy girl, often holding a gun, a knife, or even a voodoo doll, is instantly obvious.

His women were always intriguing, whether the world was crashing around them or whether they were in decisive control. Each is glamour-page gorgeous.

But talent for curvy dames was bolstered by a knack for dramatic action, bold and exotic colors, and striking throws of hues and shadows; these enticed millions of readers to do what they were supposed to do: buy the books.

Maguire often set his women against some muted slab-gray background or low-key pattern of jagged screens, but just as often he stood them out against deathly greens, bloody reds, or morguish blues.

Of course, basic black also served him well, as for what has become a signature piece, Black Opium.” 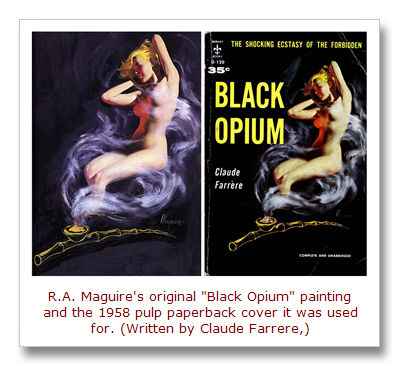 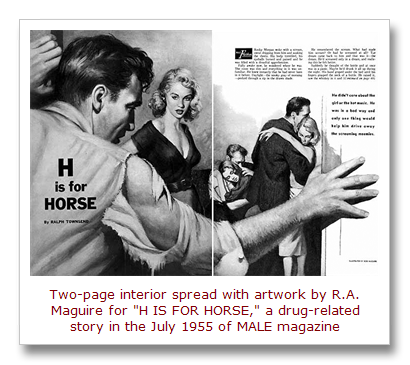 Maguire didn’t do a lot of artwork for men’s pulp adventure magazines. That’s why I always consider it a real find when I run across a Robert Maguire cover painting or interior illustration in an issue.

One of my favorites is an interior illo Maguire did for the April 1954 issue of SPORT LIFE. (This is the same issue that has another rare pulp art treasure featured on this blog — the illustrations Mort Kunstler created for a reprint of “HIS MAJESTY O’KEEFE.”) 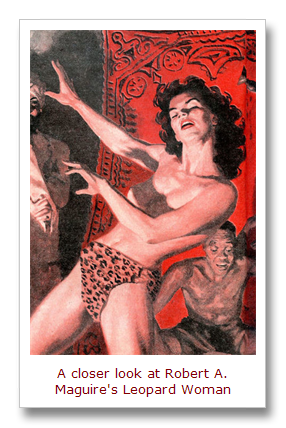 Maguire’s eye-grabbing illustration for SPORT LIFE was printed as a duotone in shades of red and gray.

It’s for the story “LEOPARD WOMAN” by Richard Hathcock, a little known writer who did a few stories for men’s magazines.

Hathcock’s story is less bloody-minded than those. It’s an exotic adventure tale set in the African city of Omduran in Sudan.

During a visit to the city, the white guy who is the narrator of the story hears about a local woman who can turn into “a slavering, yellow-eyed leopard.”

One night, he gets a local guide to take him to see her. In a mud-walled building at the end of a back alley, he witnesses the amazing transformation. 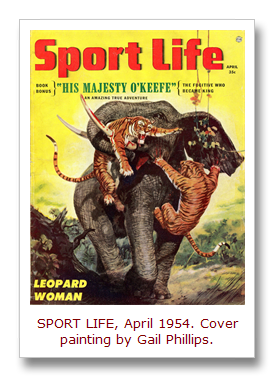 A gorgeous Galla woman — “completely naked, except for a leopard skin wound about her slim waist” — comes out and begins dancing to the sound of hypnotic drums and bamboo flutes. Our appreciative (but obviously racist) narrator tells us:

“She was one of the most beautiful women I have ever seen in Africa. Her skin possessed a sheen not often found among Negroes. She was tall and graceful, with high, full breasts, and long, wonderfully molded legs. Her eyes were startling. They were oblique, and flecked with yellow. In the lamplight of that room they gleamed strangely.”

Suddenly, the woman tumbles to the floor and postures on all fours, “the nipples of her breasts raking the dust.”

What happens next? Well, you can read it for yourself by clicking this link to download the entire story in PDF format.

By the way, the cover painting for the April 1954 issue of Sport Life magazine was done by Gail Phillips. I haven’t been able to find much information about Phillips online or in reference books. So, you know of a good bio for him, please shoot me an email or drop by the Men’s Adventure Magazines Facebook group and let me know where it is.

I do know he Phillips some paperback covers, such as the cover for BEHIND THE CRIMSON BLIND (1952), a novel written by the prolific detective story writer John Dickson Carr under his pen name Carter Dickson.

He also did the cover painting for the Pocket Books edition of the Roy Chanslor’s Western novel JOHNNY GUITAR, which was made into the campy, must-see Western flick of the same name starring Joan Crawford, Sterling Hayden, Mercedes McCambridge, Scott Brady, Ernest Borgnine, Ward Bond and John Carradine. 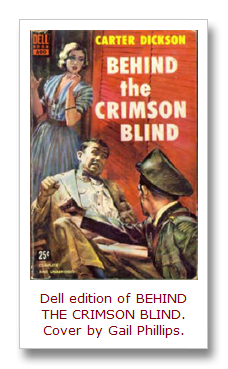 Phillips did a limited amount of illustration work or men’s magazines, mostly for ARGOSY magazine in the mid-1940s. So his cover painting for SPORT LIFE seems to be another rare pulp gem from that issue.

SPORT LIFE itself is a relative rarity in the realm of men’s pulp adventure magazines. It started out in the late 1940s as a sports fan magazine that focused on baseball, basketball, football and other American team sports.

Around 1954, the format was changed to a men’s pulp adventure format that had a heavy emphasis on sensationalized, often ludicrous stories of animals attacking humans (like the killer mountain goat example below) and obliviously cruel articles about manly hunters slaughtering various kinds of large and small animals. 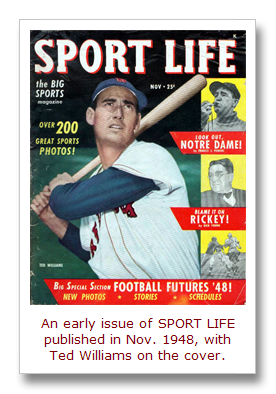 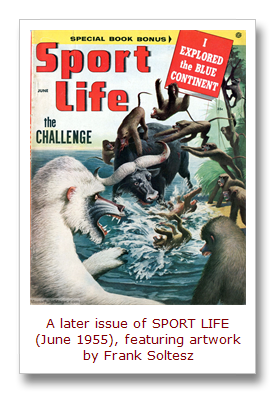 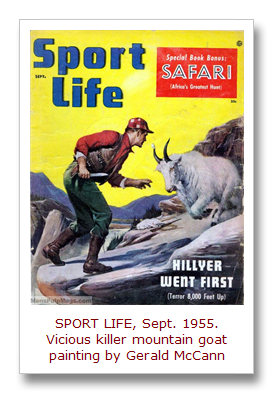 The April 1954 issue of SPORT LIFE with the Maguire illo was published by Official Magazine Corp.

Official was one of the companies owned by Martin Goodman, founder of the Magazine Management/Atlas/Diamond/Marvel publishing empire. Earlier and later issues of SPORT LIFE were published by other Goodman subsidiaries.

The men’s pulp/hunting mag version of SPORT LIFE was published quarterly from 1954 to 1957. During that time, only 15 issues were published.

That’s why copies are now a bit harder to find than issues of the longer-lasting men’s pulp mags. So, if you’re a collector, snag ‘em when you can (if I don’t get them first).