Editor’s Note: This is the second in a series of special guest posts by Tom Ziegler, author of BRUCE MINNEY: THE MAN WHO PAINTED EVERYTHING — a great new book about one of the top artists who worked for men’s adventure magazines in the 1950s, 1960s and 1970s.

I bought both the the ebook version (which looks great on my iPad) and the large format paperback version (which I can confirm is nicely printed and worth the higher price if you prefer print books).

In his first guest post here, Tom wrote about the genesis of his book and about how Bruce decided to move to New York City in 1955 to take a shot at becoming a professional artist.

This second post picks up after Bruce arrived in New York. Most major publishers of men’s adventure magazines, like Magazine Management, had their editorial offices there, and they gave Bruce his first steady work as an illustration artist.

His association with the genre became a long-lasting one. From the mid-1950s to the mid-1970s, Bruce painted hundreds of cover paintings and interior illustrations for men’s pulp mags. More than 300 of them are featured in Tom Ziegler’s book, along with commentaries by Bruce.

It’s an awesome addition to the still relatively short list of books about men’s adventure magazines and the artists who worked for them. I give it my highest recommendation.

“Bruce Minney: The Man Who Painted Everything”— Part 2, by author Tom Ziegler

My father-in-law Bruce Minney really did paint just about everything you can paint. 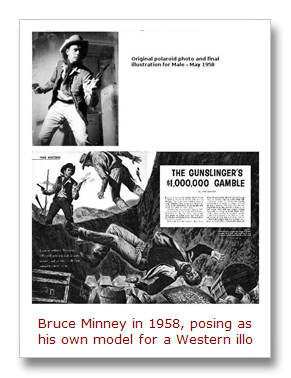 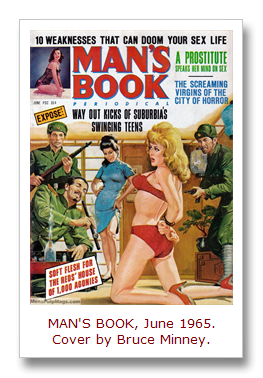 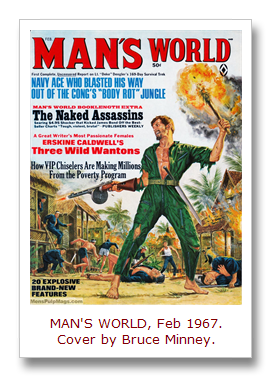 He worked another 20 years painting covers for all kinds of paperbacks including western, historical romance, action, military, biography, and Gothic horror.

He also did storyboards for advertising agencies. 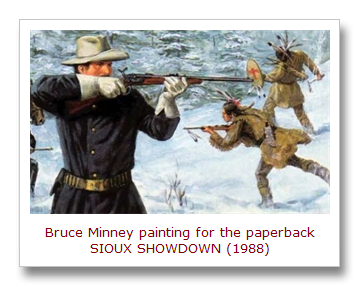 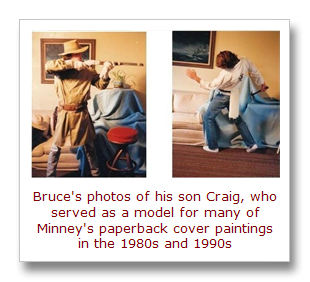 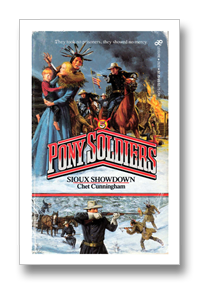 For a few years, he made award winning pottery and most recently, he is making mobiles, collages and paintings based on the collages.

Bruce never made it to the level of Picasso or Jackson Pollock, but he was able to support a wife and two children doing art.

Once his career started, he never had, as he put it, “a real job.” 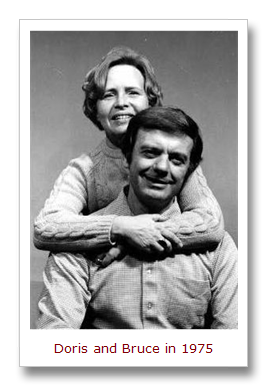 “You’re stupid when you’re young…Neither Doris or I had jobs lined up. We took our savings and a dream. We got to New York and stayed in a rooming house for week and then Doris found a place in Queens. Doris believed in me. What’s the opposite of pessimism – that’s what we were. We just believed that everything would work out. It was almost religious. She got a job with Doyle, Dane, Bernbach, who were just starting out in advertising. She was executive secretary to the media director.”

“Doris was responsible for getting me into Magazine Management. We had a list of magazines to talk to and one day on her lunch hour she took my stuff up to BLUEBOOK magazine and told the art director that I couldn’t get any work. He said ‘have you heard of Ed Balcourt, the artists’ rep?’ She got Eddie’s phone number and I went to see him.”

It was through Balcourt that Bruce really began his career as a professional illustrator. 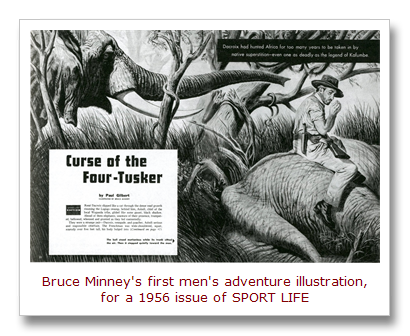 Balcourt also repped for many other artists who did illustration work for men’s adventure magazines during part of their careers, including Tom Ryan, Robert Schulz, John Leone, Norm Eastman, John Duillo, Basil Gogos, Charles Copeland, Rudy Nappi and Robert Maguire, among others.

Bruce describes the first paying job he ever did:

“It was a two-page spread of a hunter sitting on the back of a dead elephant and smoking a cigarette. I used Eddie Balcourt as the model for the hunter, because I’d just arrived in New York and didn’t know any models yet or any photographers. Eddie took me to see the fashion photographer, Robert Scott, to do the photos. Robert Scott and I shot Eddie Balcourt sitting on a chair, which was supposed to be an elephant. That was my first job. It was a black-and-white two page spread for SPORT LIFE magazine. They must have liked it, because they gave me other work.”

Art directors would call Eddie, who would pick up the job. Eddie would call Bruce and Bruce would go into the city to pick it up. When he was done, Bruce would deliver the finished illustration to Eddie. Bruce rarely talked to the art directors. For this, Eddie took 15%.

After about a year, Balcourt started getting calls from art directors telling him they had a job for Bruce Minney. They also started calling Bruce directly if there were changes.

At first, Bruce worked almost entirely for Magazine Management, publisher of many of the top men’s adventure magazines, such as ACTION FOR MEN, COMPLETE MAN, FOR MEN ONLY, MALE, MAN’S WORLD, MEN, MEN IN ACTION, STAG and TRUE ACTION. 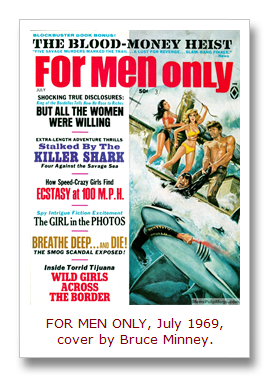 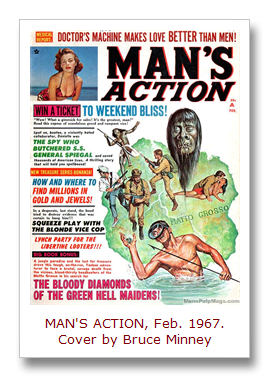 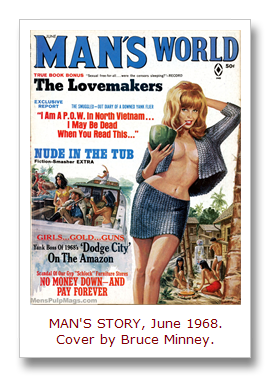 “Eddie would pick it up and I did all the work. When I was done, I gave him the final illustration to deliver. His office was on 45th street near the High School For the Performing Arts. This went on for about 4 or 5 years. He got me started and I was grateful for that, but eventually, my career stalled. I said, ‘you’re not getting me any new jobs.’ He had no answer. When I told him I was leaving, he took it OK. Everyone else was doing the same thing. At that point in my career, I was confident I could make it on my own.” 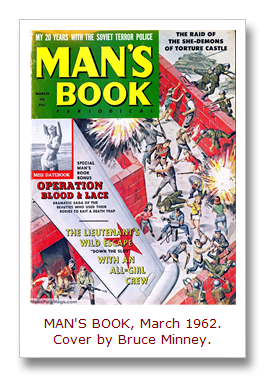 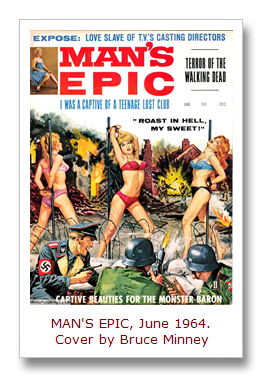 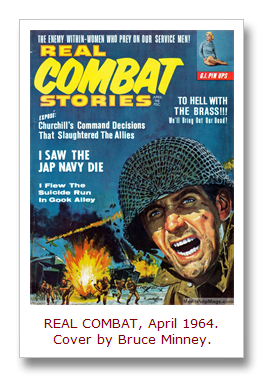 In the meantime, Bruce and his family moved to the suburbs in Sparta, NJ, where he lived until 1981. When the men’s adventure magazines declined in the 70s, Bruce started doing paperbacks. In the late 70s, publishing companies started using more photography instead of illustrations. In 1981, with promises of movie work, Bruce moved back to California. The movie work never materialized and he continued to do paperbacks. In 1983, his wife, Doris, died and the 55-year old Bruce took a marker illustration class at UCLA so he could get work in advertising. Bruce said:

“I started doing storyboards, plus painting paperback covers. Storyboard work was brutal. You’d go in one day and you’d have to have six illustrations the next morning. I did storyboards for a few years. I did some for advertising agencies, for ads for companies like McDonald’s and Chrysler. I also did storyboards for NBC. I never worked at their studios. I always freelanced. I never had a real job.”

Eventually, the brutal pace of advertising work convinced Bruce that it was time for a change. He had always been interested in sculpture, but he knew he couldn’t make a living at it. He took some pottery classes mainly to have access to a kiln and started to develop a style. He soon became quite proficient and decided that if he was going to make a living selling pottery, he needed to be in a state that had lots of arts and craft shows. In 1989, he packed everything into a U-Haul and drove to Florida, where he still lives. He made award winning pottery for almost 20 years and retired in 2009. 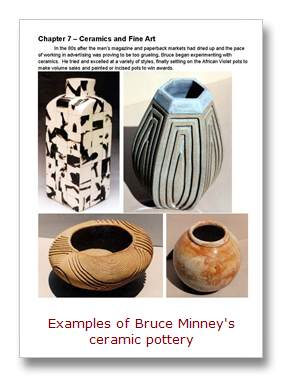 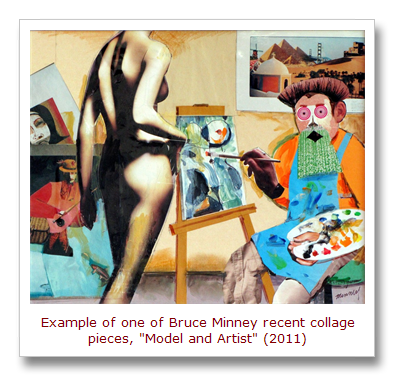 Coming up in Tom’s third guest post: more excerpts from his book.

In the meantime, you can read more about Bruce Minney in the 3-part interview he did for MensPulpMags.com last year.