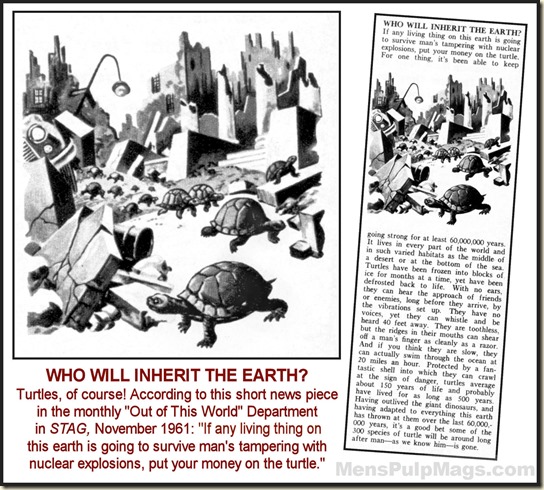 I’m a big fan of turtles in real life. I’m also a big fan of the surreal “killer turtles” stories and artwork found in some of the men’s pulp adventure magazines published in the 1950s, 1960s and 1970s.

We’ve featured some examples of gonzo turtle yarns and illustrations in several books in our Men’s Adventure Library series, including our latest offering, I WATCHED THEM EAT ME ALIVE.

Recently, a cool little item about turtles in the monthly “OUT OF THIS WORLD” Department in the November 1961 issue of STAG caught my attention.

“OUT OF THIS WORLD” is kind of a combination of news bytes, historical factoids and Robert Ripley’s “Believe It or Not,” illuminated with small, uncredited illustrations.

Many men’s adventure magazines had regular sections like it.

They often tend to get overlooked since they’re not as flashy as the cover paintings and interior illustrations or the feature stories.

But, personally, I find them to fascinating, entertaining and (dare I say it?) educational.

Most things in the “OUT OF THIS WORLD” Department that appeared in STAG are true or at least largely based on facts.

For example, I learned from the first mini-article in the “OUT OF THIS WORLD” Department in STAG, November 1961 that Benjamin Franklin was “the first American to tinker with the possibility of execution by electrocution.”

It explains: “By using a set-up consisting of six Leyden jars, he was able to utilize the electrical current from the jars to snuff out the lives of chickens, lambs and a 10-pound turkey.”

Yes, that really is true. I checked.

Franklin did experiments in which he killed animals using electrical charges stored in Leyden jars, the 18th Century version of batteries.

There are some intriguing additional details about this dubious distinction in an article on the POPULAR SCIENCE magazine website.

“The turkies, though thrown into violent convulsions and then lying as dead for some minutes, would recover in less than a quarter of an hour,” Watson said drily, seemingly oblivious to the animal cruelty this implied.

But Ben was persistent. With a bigger shock, he did manage to kill a 10-pound turkey. And, Franklin boasted to Watson that “birds killed in this manner eat uncommonly tender.”

Don’t try it at home, folks. As the POPULAR SCIENCE article also explains, Franklin electrocuted himself during one of those experiments. Just not fatally. 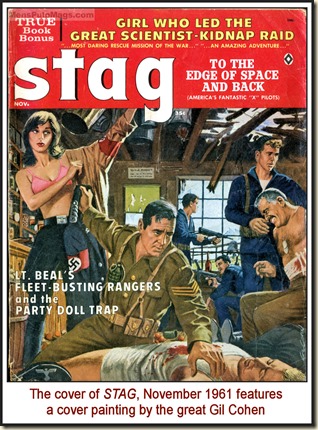 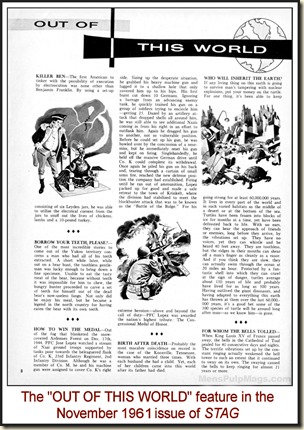 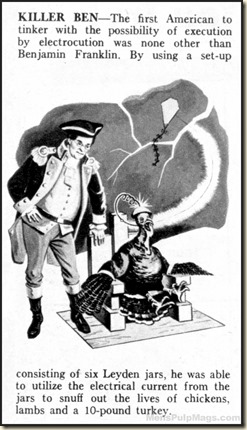 Another fact-based mini-article in this example of “OUT OF THIS WORLD” is about a hero of a different kind, Jose Mendoza Lopez. Lopez was a Mexican-born American soldier who received the Medal of Honor for his bravery during the bloody Battle of the Bulge in World War II.

Using a heavy Browning M1919 machine gun, Lopez killed over 100 Nazi soldiers during that battle, more than any other American soldier did in WWII. In doing so, he saved the lives of many fellow soldiers who were pinned down by a German assault, allowing them to withdraw.

As the STAG piece explains: 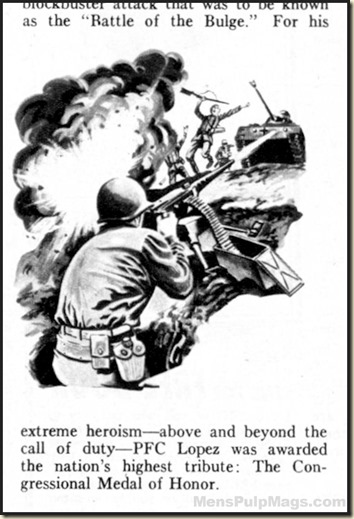 “Although he was a member of Co. M, he and his machine gun were assigned to cover Co. K’s right side. Sizing up the desperate situation, he grabbed his heavy machine gun and lugged it to a shallow hole that only covered him up to his hips. His first burst cut down 10 Germans. Ignoring a barrage from an advancing enemy tank, he quickly trained his gun on a group of soldiers trying to encircle him—getting 25. Dazed by an artillery attack that dropped shells all around him, he was still able to see additional Nazis corning in from his right in an effort to outflank him. Again he dragged his gun to another, not so vulnerable position. Before he could set up his gun, he was bowled over by the concussion of a near miss, but he immediately reset his gun and kept on firing. Singlehandedly, he held off the massive German drive until Co. K could complete its withdrawal…For his extreme heroism—above and beyond the call of duty—PFC Lopez was awarded the nation’s highest tribute: The Congressional Medal of Honor.”

There are many articles about Lopez online, including a cool page about him on the “Badass of the Week” website. But I first learned about him from the brief piece in STAG.

Some of the mini-articles in STAG’s “OUT OF THIS WORLD” sensationalized or stretched the facts. Some were based on legends.

Some combined fact and legend, like this one in the the November 1961 issue.

“BORROW YOUR TEETH, PLEASE? — One of the most incredible stories to come out of the Yukon territory concerns a man who had all of his teeth extracted. A short while later, while out on a bear hunt, the toothless gentleman was lucky enough to bring down a fine specimen. Unable to eat the tasty meat of the bear, because without teeth it was impossible for him to chew, the hungry hunter proceeded to carve a set of teeth for himself out of the dead bear’s now-useless fangs. Not only did he enjoy his meal, but he became a legend in the north country for having eaten the bear with its own teeth.”

With some Googling, I found that this is based on stories about Erwin A. “Nimrod” Robertson, a hardy Mainer who headed to Alaska during the Klondike Gold Rush.

Nimrod did make dentures using “incisors from a Dall sheep, premolars from a caribou, and molars from a bear.” But the legend about him eating the bear that supplied the molars is just that—legend.

Another little story in the OOTW Department in STAG, November 1961 says:

“FOR WHOM THE BELLS TOLLED — When King Louis XV of France passed away, the bells in the Cathedral of Toul pealed for 40 consecutive days and nights. The terrific vibrations set up by the constant ringing actually weakened the bell tower to such an extent that it continued to sway on its own. The swaying caused the bells to keep ringing for almost 21 years or more.”

That whopper is obviously contrary to the laws of physics. But, again, it probably wasn’t concocted by STAG, just repeated. It seems to be a legend that was floating around, at least in the 1960s. I found it in an old Ripley’s-like column titled “REALLY?” in a newspaper published in 1965. 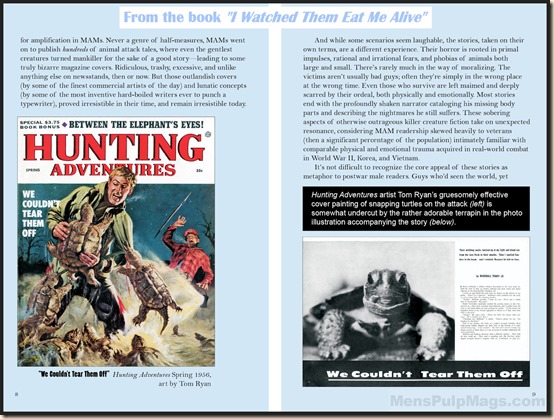 There’s also this little oddity in the November 1961 “OUT OF THIS WORLD”:

“BIRTH AFTER DEATH — Probably the most macabre coincidence on record is the case of the Knoxville, Tennessee, woman who married three times. With each husband she had a child. Yet, each of her children came into this world after its father had died.”

Maybe true. Maybe not. I didn’t bother to Google that one.

The piece I liked best in the OOTW Department in STAG, November 1961 is about turtles.

In this case, it’s not one of the wild “killer turtle” stories we’ve featured in some of our books.

It’s a bit of speculation about what animal is likely to survive in the event of a nuclear apocalypse.

“WHO WILL INHERIT THE EARTH? — If any living thing on this earth is going to survive man’s tampering with nuclear explosions, put your money on the turtle. For one thing, it’s been able to keep going strong for at least 60,000,000 years. It lives in every part of the world and in such varied habitats as the middle of a desert or at the bottom of the sea. Turtles have been frozen into blocks of ice for months at a time, yet have been defrosted back to life. With no ears, they can hear the approach of friends or enemies, long before they arrive, by the vibrations set up. They have no voices, yet they can whistle and be heard 40 feet away. They are toothless, but the ridges in their mouths can shear off a man’s finger as cleanly as a razor. And if you think they are slow, they can actually swim through the ocean at 20 miles an hour. Protected by a fantastic shell into which they can crawl at the sign of danger, turtles average about 150 years of life and probably have lived for as long as 500 years. Having outlived the giant dinosaurs, and having adapted to everything this earth has thrown at them over the last 60,000,000 years, it’s a good bet some of the 300 species of turtle will be around long after man—as we know him—is gone.”

From what I can tell, most of those turtle factoids are true. And, in 1965, the Cold War was in full swing and the U.S. and Soviet Union were stockpiling and testing more and bigger nuclear weapons to use against each other. So, the threat of a radioactive Armageddon was viewed as almost inevitable reality.

But if it ever does, I hope the turtles do inherit the earth. Humans won’t deserve it. 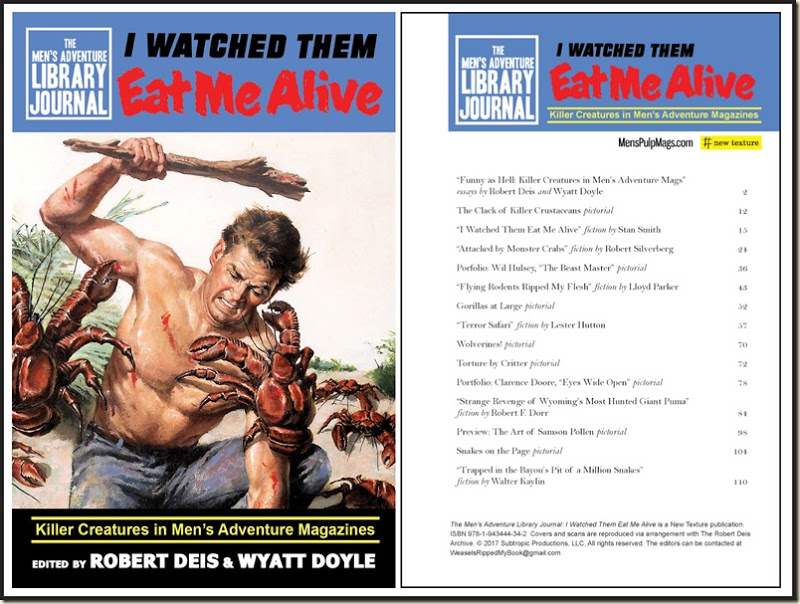 R.I.P. Charlie “Angelo” Liteky: a man of courage and conviction in wartime and after…

“YANK ACE WHO BATTLED THE JAPS OVER PEARL HARBOR.”