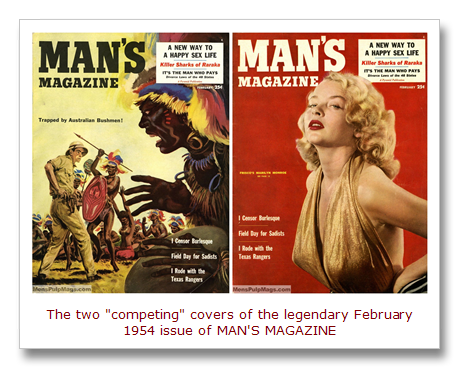 As I explained in a previous post on this blog, the February 1954 issue of MAN’S MAGAZINE is the legendary painting vs. photo market test issue mentioned in the Taschen book MEN’S ADVENTURE MAGAZINES.

The editors of MAN’S wanted to find out if readers would prefer the magazine to continue using action/adventure paintings on its covers or switch to girlie cheesecake cover photos.

So, half of the copies printed featured an exotic cover painting of an iconic white explorer wearing khakis and pith helmet being threatened by a group of savage “Australian Bushmen.” (They look African but are apparently supposed to represent the aborigines featured in the lead story inside).

The cover on the other half of the print run for that issue had a photo of Eve Meyer, the glamour model and wife of photographer and filmmaker Russ Meyer.

Initially, the photo cover seemed like the winner and photos of models were used on the April and June covers.

In the June 1954 issue of MAN’S the editors reported:

“Mail on the action cover vs. the girl cover shows that approximately 75% of our readers prefer glamour, 25% prefer adventure.” 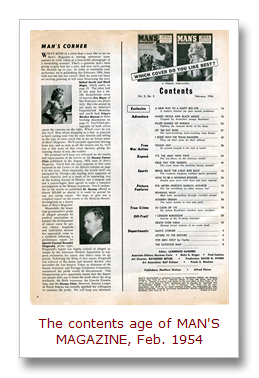 However, by August of 1954 MAN’S went back to painted covers and continued using them throughout the Fifties and Sixties, as did most other men’s pulp adventure periodicals.

From what I can gather, there were several reasons. One is that anti-pornography activist groups were less likely to try to get magazines with adventure cover paintings banned from local newsstands than magazines with sexy cover photos. Magazines with painted covers were also less apt to draw attention from Post Office censors.

Moreover, wild action and adventure cover paintings were simply a better fit with the types of stories published by men’s adventure magazines like MAN’S — and with the interests of most of their readers.

Regular readers of men’s adventure magazines were generally less affluent, less well-educated and less urban than the readers targeted by PLAYBOY and its imitators.

They liked cheesecake photos of women as much as any hetero man. But they had little or no interest reading in egghead fiction stories or articles about the latest men’s fashions.

They tended to be blue-collar workers who enjoyed hunting and fishing. A high percentage were veterans (typically regular enlisted men, not officers). 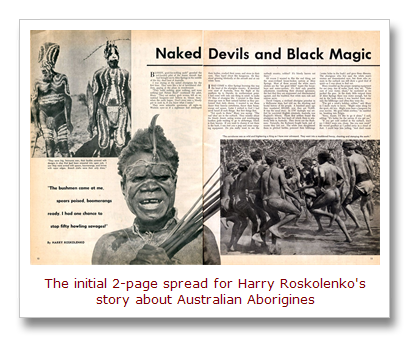 They were guys who enjoyed action, adventure and war stories, gritty crime stories and outdoor sports articles. They also liked exposés and articles about sex-related topics.

MAN’S MAGAZINE and other men’s pulp mags gave them what they wanted.

For example, the first story in the February 1954 issue of MAN’S, after the regular “The Outdoor Man” news briefs section, is a purportedly true adventure yarn about an encounter with some aborigines in a remote area of Australia.

A quote printed in boldface type on the first page hypes the action and danger to come: “The bushmen came at me, spears poised, boomerangs ready. I had one chance to stop fifty howling savages!”

By today’s standards, this story is clearly racist and ethnocentric (like most things in the American media were throughout the past two centuries).

It starts out with a local pilot giving this sneering description of the surviving members of Australia’s indigenous population:

However, the story is interesting to read and it’s illustrated with some great photos.

I especially love the nighttime photo of a group of Aborigine men wearing body paint that seems luminescent in the flash of the camera (something that plays a role in the plot).

And, from a literary perspective, the story is actually noteworthy.

It was written by Harry Roskolenko (1907-1980), a prolific American writer poet, novelist and travel writer who also worked as a critic for the New York Times Book Review.

He was famous enough in the U.S. that a collection of his papers is kept in the special collections section of the Syracuse University library.

According to an article about him in a 2004 National Library of Australia newsletter, Roskolenko was also something of a literary celebrity in Australia. He made a splash in Australia’s local modernist poetry scene while stationed there during World War II and returned frequently after the war.

Several books of Roskolenko’s poems were published. None were major commercial or critical successes. (The more famous American poet William Carlos Williams called one of them “so bad, that by its very depravity it is impressive”).

Roskolenko seems to have made more of his income as a self-described “hack writer” of travelogue books like WHITE MAN GO!, pulpy novels like BLACK IS A MAN (“Yesterday he was a white man – today he is a Negro!”) and travel and adventure stories like “Naked Devils and Black Magic.” 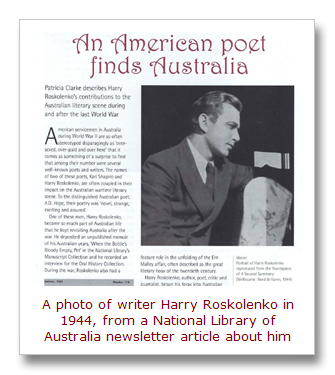 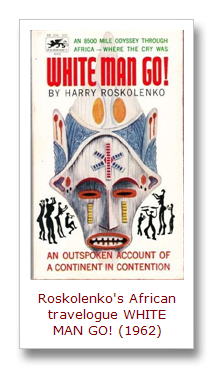 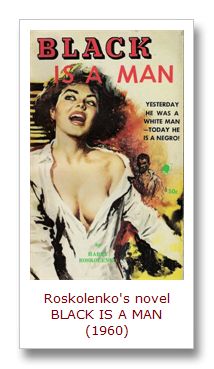 Nudity was rare in men’s adventure mags in the 1950s — unless, of course, the women were “natives.” Under the unspoken “National Geographic Rule,” it was OK to show photos of native women topless.

The title of the next story, “A New Way to a Happy Sex Life,” sounds like it would be one of the usual hyped-up sex advice or sexposé stories often found in men’s pulp mags. And, one of the photos used for it is a bit risqué.

But this story is actually a serious and historically interesting nonfiction article about “a modern form of mental healing called group psychotherapy.” 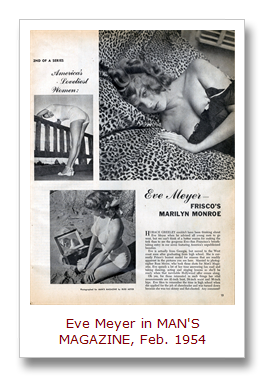 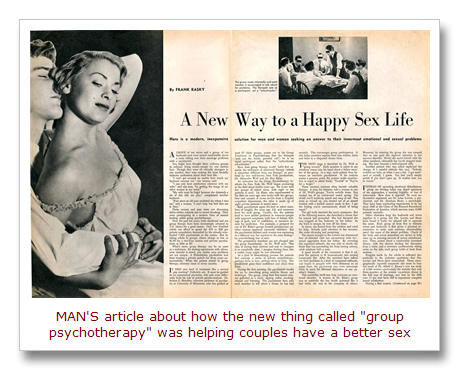 It was written by Frank Rasky, a journalist who wrote various types of nonfiction articles for both men’s magazines and mainstream magazines in the 1950s. (For example, he wrote a profile of actress Judy Holliday for NEW LIBERTY magazine in 1952.) 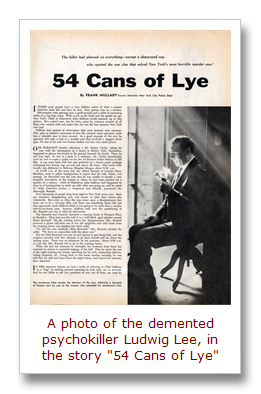 I didn’t until reading this article. But apparently indoor bike race marathons, like dance marathons, were a popular form of entertainment before World War II.

Next comes a story which reflects the fact that part of the DNA of men’s adventure magazines came from the often gruesome true crime and detective magazines that were popular with male readers in the 1940s, 1950s and 1960s.

It’s a fact-based story about a psycho janitor named Ludwig Lee. Back in 1927, Lee murdered and dismembered two women in New York.

The story was penned by Frank Mullady, a former New York cop who became a magazine writer and book author. The title, “54 Cans of Lye,” refers to a telltale clue that led to the indictment and execution of Lee.

One of the photographs used in this piece shows a police detective holding up the severed arm of one of Lee’s victims.

In fact, I won’t even show that one here. But if you’re curious to see how grisly some of the true crime photos were in vintage men’s adventure magazines, you can download a digital copy of the February 1954 of MAN’S MAGAZINE in my Payloadz store.

Here’s a link to my second post about the legendary February 1954 issue of MAN’S MAGAZINE, which looks at some other pulpy treasures inside it.