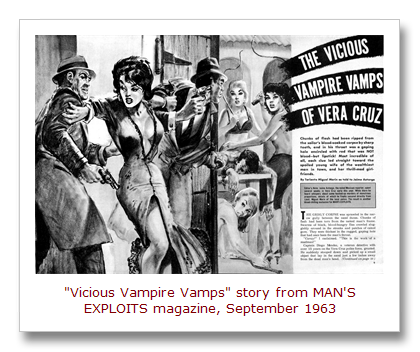 Man’s Exploits was one of the men’s adventure magazines that earned the genre the nickname “men’s sweats.”

The “sweats” subset of men’s adventure mags tended to be very cheaply produced, badly edited and full of raunchy stories. Some were sleazy enough to be “under the counter” magazines.

Most of their stories and the illustrations and photos that went with them have sex-related angles, often with a hefty dose of S&M.

I’m not into that kind of stuff in the real world.

For example, I am a fan of vampire yarns and the lead story in the September 1963 issue of Man’s Exploits — “THE VICIOUS VAMPIRE VAMPS OF VERA CRUZ” — is a truly strange one.

“Chunks of flesh had been ripped from the sailor’s blood-soaked corpse by sharp teeth, and in his throat was a gaping hole encircled with red that was NOT blood – but lipstick! Most incredible of all, each clue led straight toward the spoiled young wife of the wealthiest man in town, and her thrill-mad girlfriends.”

If that peaks your interest, you can read the entire story by clicking on this link and downloading it in PDF format. (Be sure to check out the wild vintage ads, too.) 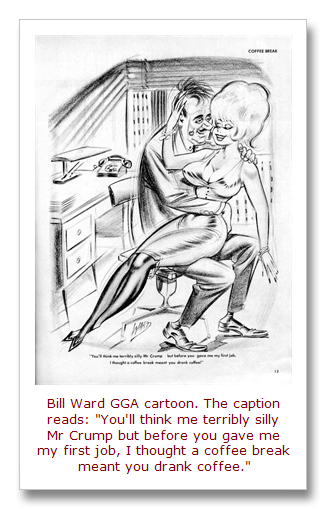 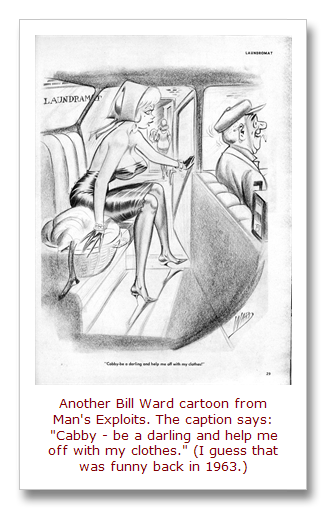 Ward is best known as the creator of the busty, blonde cartoon character Torchy. He drew his first Torchy cartoon strips for the Army base newspaper at Fort Hamilton in Brooklyn, where he was stationed during World War II. 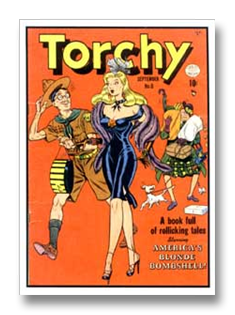 The Torchy strips became so popular with GIs that they were soon syndicated and appearing in other Army newspapers worldwide.

After the war, Torchy lived on for a while in comics published by the legendary publisher Everett M. “Busy” Arnold.

Like several other publishers of men’s adventure mags, such as Martin Goodman and Stanley Moore, Arnold published both comic books and magazines.

In the bio Bill Ward wrote for his website, he said that before being drafted into the Army he’d done some work for Arnold’s comic book company Quality Comics — which published Will Eisner’s pioneering Spirit comics, Jack Cole’s Plastic Man, Reed Crandall’s Blackhawk and many other “Golden Age” comics.

After the war, Ward said Arnold sought him out again.

“I think it was around 1946 that Busy Arnold, Quality’s publisher asked me if I could do another story for Modern [one of the Quality comics] and did I have any ideas? I mentioned the fact that I had drawn a strip about a daffy blonde in the Army call ‘Torchy.’ He went for the idea, and I convinced him to let me ink it. At long last Torchy was in the comics. The strip was very popular, running in both Modern and Doll Man for about 3 years.”

Another thing that caught my eye in the September 1963 issue of Man’s Exploits was the two-page ad spread for Eros magazine, featuring a photo from one of Marilyn Monroe’s last photo sessions. 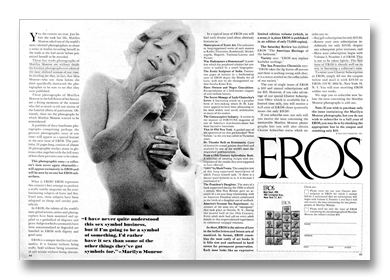 The issue of Eros featured in the Man’s Exploits ad is the third of four issues that were published.

The fourth issue got Ginzburg indicted under federal obscenity laws and put an end to the now highly-collectible Eros. (I recently saw a complete set of all four issues in VG condition on eBay priced at $399.)

There are some other truly wild stories in the September 1963 issue of Man’s Exploits, including the one that goes with the Norm Eastman cover painting I featured in my previous post.

That story — titled “BULLWHIP BATTLE on the Dude Ranch for Divorcees” — is about a unique Western ranch where bored, rich babes go to indulge in some cowboy love and whip lashings.

Then there’s the anti-Commie yarn “CHIANG KAI-SHEK’S SUICIDE SQUAD OF NAKED GIRL RAIDERS.” According to the promotional subhead for that credibility stretching tale:

“Before advancing against Red outposts, the lushly-curved, almond-eyed raiders stripped off all their clothes. ‘The sight of beautiful, nude girls coming toward them spoils the enemy’s aim,’ it was explained to me. And, looking at this suicide corps of beauties, I could see it might…”

The illustration for another story — “We fought the KILL-CRAZY HELL PIRATES of the MALAY STRAIGHTS” — postulates a world where the pirates are beautiful, scantily-clad babes. 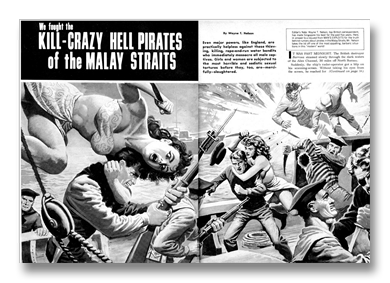 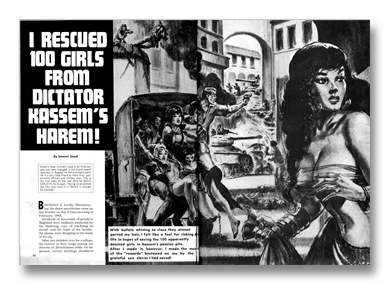 The story “I RESCUED 100 GIRLS FROM DICTATOR KASSEM’S HAREM!” at least has a tenuous connection to reality. It tells the story of a Yank who gets involved in the February 1963 revolution that overthrew the Iraq dictator Abdel Karim Kassem (aka Abd al-Karim Qasim).

Kassem was an Iraqi military officer who seized power in 1958. He apparently had some Commie pinko ideas, like redistributing land owned by rich Iraqis to impoverished farmers. And, when he got a little too cozy with Soviet Russia, the CIA encouraged the February 1963 coup by Saddam Hussein’s Ba’ath party. Kassem was killed in the revolt and the way began being paved for Saddam Hussein’s eventual rise to power.

Somehow the history books and other websites leave out the part about Kassem’s harem.