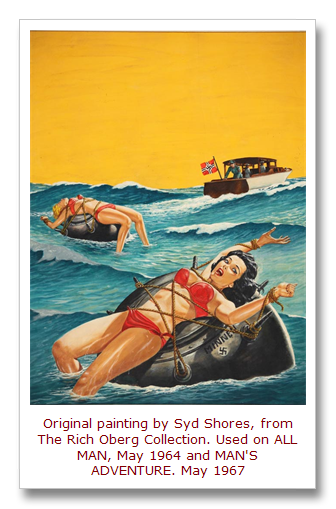 Most people who are familiar with artist Sydney “Syd” Shores (1913-1973) think of him as a comic book artist. And, indeed, he was one of the greatest comic book artists of the Golden Age and Silver Age of comics.

Timely was founded in 1939 by publisher Martin Goodman, who later published many of the best men’s adventure magazines under the banner of his Atlas/Diamond line and the umbrella company Magazine Management. (Magazines like ACTION FOR MEN, FOR MEN ONLY, KEN FOR MEN, MALE, MAN’S WORLD, MEN, MEN IN ACTION, REAL LIFE and STAG.)

Shores was one of the first staff members at Timely, along with comic book legends Joe Simon, Jack Kirby and a nephew of Goodman’s named Stanley Lieber (soon better known as Stan Lee).

Shores worked as a penciller, inker and cover artist on comics featuring some of the most enduring comic book characters, such as Captain America, The Human Torch and the Sub-Mariner, and on scores of others now known mostly to comics aficionados.

From the early 1940s to the late 1950s, he was one of the most popular and prolific artists in the comics industry.

Then, in the late ‘50s, Shores and other comics artists found themselves with little or no work, due to a severe downturn in the comic book market. The downturn was caused by several factors. One was the hysteria over sex and violence in comics created by Dr. Fredric Wertham and his book Seduction of the Innocent, which led to witch-hunt-like Congressional hearings and to the prudish “Comics Code” of 1954.

The Comics Code essentially banned violence and gore, “Good Girl Art” showing sexy women, and any hint of sexuality in comic books. This forced many popular horror, suspense and mystery comics out of business.

Many pioneering comics artists who faced hard times because of the comics downturn began working for men’s adventure mags in the mid- to late-1950s. Syd Shores was one of them.

From around 1957 to 1968, he did scores of great cover paintings and interior illustrations for many different men’s adventure magazines.

In 1968, when the comics industry started rebounding, Shores went back to doing comic book artwork, which he called his “first love.” He continued doing comics art, primarily for Marvel, until his death from a heart attack in 1973. 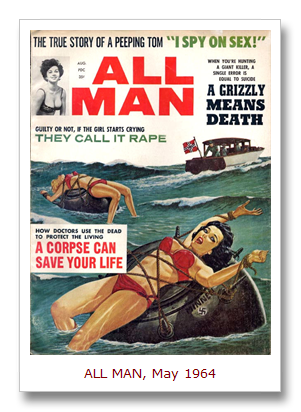 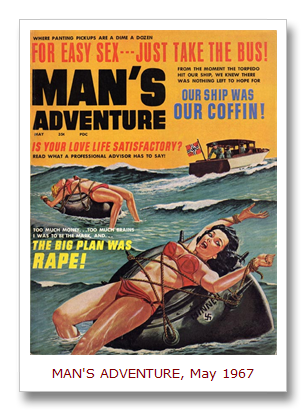 The original Syd Shores painting at the top of this post, owned by men’s pulp art collector and friend of this blog Rich Oberg, is a sweat mag classic. It’s a wildly-creative painting of two distressed damsels in matching red bikinis, tied with rope onto German mines bobbing in the ocean.

Another cringe-inducing fate awaits the bra and underwear model in the Syd Shores cover painting below, used on the September 1965 issue of ALL MAN.

Take a close look at the background and you’ll see that the Nazi bastards are putting women into a large mold, pouring molten gold on them and turning them into golden statues. 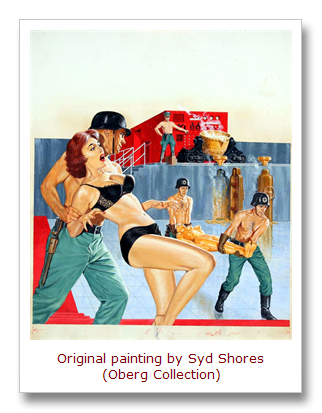 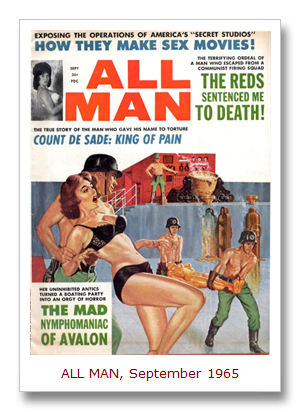 Syd Shores didn’t do as many evil Nazi B&T covers as some men’s adventure artists, such as Norm Eastman. But the ones he did do are among my favorite Shores covers. Below are a couple of other classics. 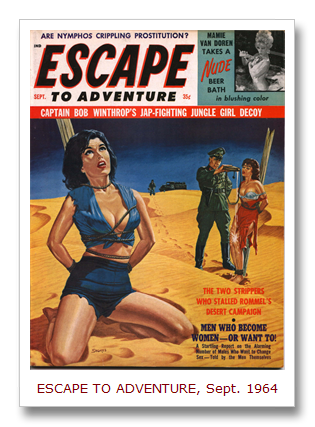 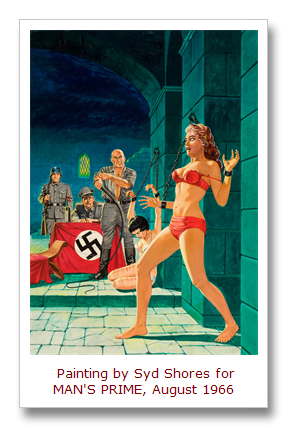 It’s interesting to compare some of the men’s sweat magazine covers Syd Shores created in the 1960s with the comics covers he created in the 1940s and 1950s. As you can see from the following examples — all of which were drawn by Shores — violence, bondage, torture and buxom babes were common features of many Golden Age comics prior to the buzz-killing Comics Code. 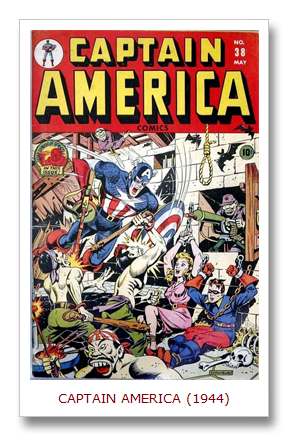 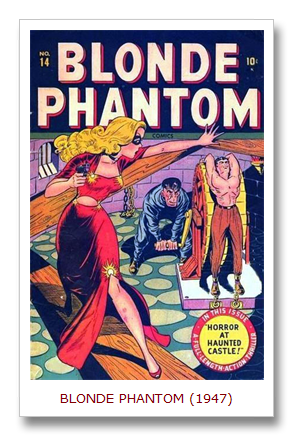 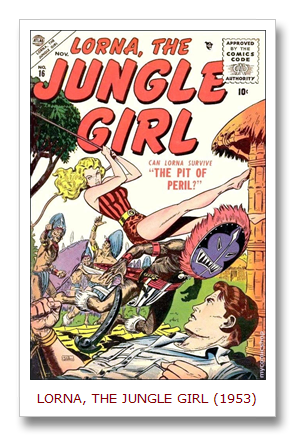 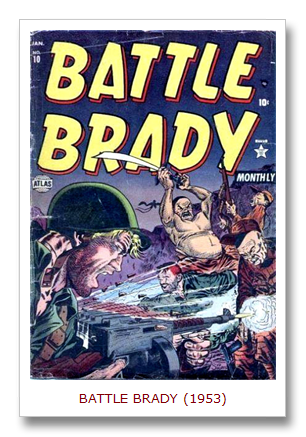 Because of Dr. Wertham and the Comics Code, the fragile minds of America’s children were protected from seeing such images on comic books, for a while.

Of course, CAPTAIN AMERICA continued and is now bigger (and bloodier) than ever. Many other “controversial” Golden Age comics that featured suggestively violent or sexy artwork — such as THE BLONDE PHANTOM, LORNA, THE JUNGLE GIRL and BATTLE BRADY — didn’t survive.

But their deaths helped fuel the rise of men’s adventure magazines, in more ways than one.

Coming up in the next post here: more great men’s adventure and comics artwork by Syd Shores.