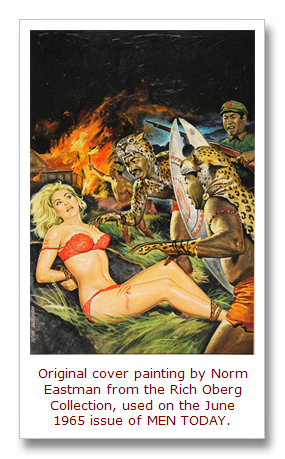 Recently, Rich Oberg — the premier expert on and collector of men’s adventure magazine art (and patron saint of this blog) — has been shooting and scanning up a storm.

He and I had been talking about the lurid, politically incorrect bondage-and-torture style cover paintings that helped give men’s adventure magazines the nickname “sweat magazines.” (Actually, sweat mags are a subgenre of men’s adventure mags, many of which rarely used sado-masochistic B&T cover art.)

After our conversation, Rich sent me a slew of photos and scans of some of his favorite sweat mag paintings and covers to show here in a series of posts.

Our previous Eastman post focused on the evil Nazi bondage and torture cover paintings that Eastman — and the sweat mag subgenre of men’s adventure magazines — are best known for.

The bad guys in the Eastmans shown in this post are more varied.

They include bloodthirsty Leopard Men, fiendish Commies and psycho bikers, in addition to some evil Nazis.

The cover painting at the top is an unusual Leopard Men image.

As you may know if you’re a regular reader of this blog, I’ve done several previous posts about Leopard Men stories. They were popular subjects in men’s adventure magazines in the 1950s and 1960s.

But the typical stories and artwork involved members of the Leopard Society, which was a real cult in Africa. (For example, see the posts “Leopard Men Ripped Their Flesh!” and “Leopard Men and Leopard Women”.

The Eastman cover painting above is an odd one. It shows what seems to be Korean or Chinese Commies in African Leopard Men costumes. They’re getting ready to use their metal-bladed gloves to slice up a barely-clothed babe (who looks like favorite Eastman model Eva Lynd to me). 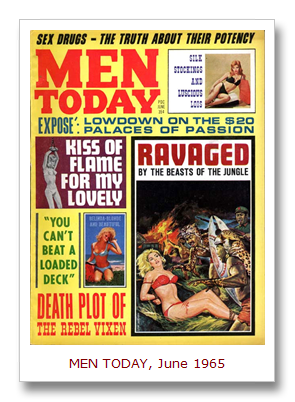 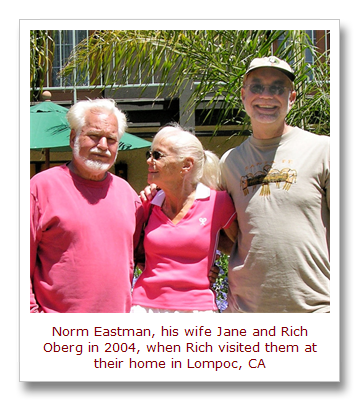 That painting was used as an inset panel on the cover of the June 1965 issue of MEN TODAY, promoting the story “RAVAGED BY THE BEASTS OF THE JUNGLE.”

The Cuban Commie Castro-lookalike in the Eastman painting shown below, used on MAN’S STORY in September 1965, is getting ready to whip a lingerie model with his belt in a dungeon-like room. 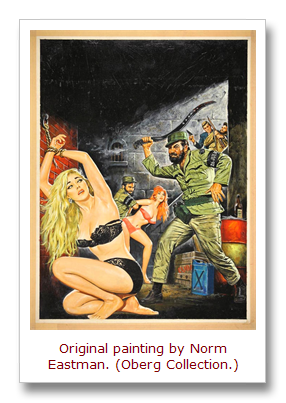 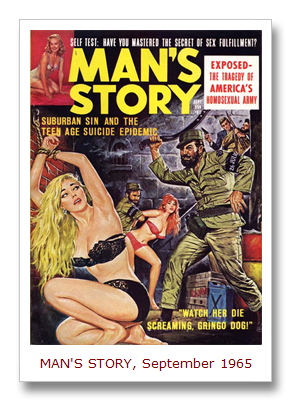 Luckily, for her, a James Bond clone is coming down the steps in the background to save her. Otherwise, she might end up fulfilling the threat in the title of the story the painting goes with: “WATCH HER DIE SCREAMING, GRINGO DOG.” (Click this link to check out some other wild evil Cuban Commie cover paintings and stories.)

Next is an Eastman painting that features some other Communist villains. This time, they’re Russian or East German Commies, tormenting another poor lingerie model in the “EAST BERLIN TORTURE PALACE.” (She looks like she might be based on frequent Eastman model Lisa Karan.) 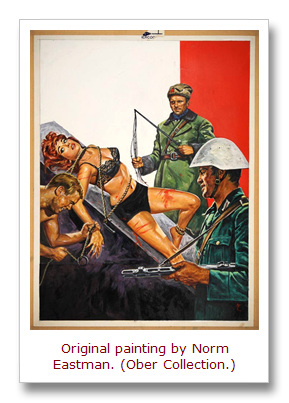 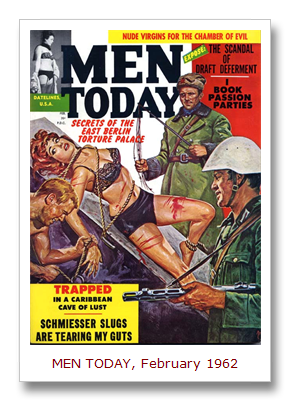 Starting in the mid-1960s, motorcycle gang members were added to the list of damsel-torturing villains frequently seen on sweat magazine covers. Typically, there are some Nazi swastikas on the bikers’ clothes or in scenes with them, as in the Norm Eastman painting below, which appeared on the January 1970 issue of MEN TODAY.

The model used for this one looks like she might have been another Eastman favorite, Shere Hite, who later wrote the famous Hite Reports about female and male sexuality. 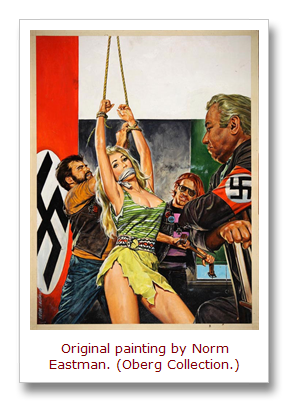 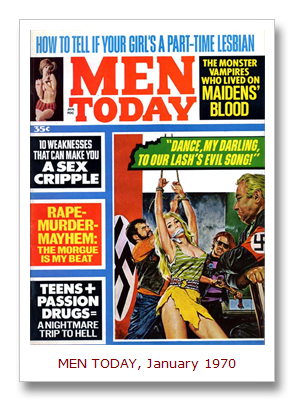 Finally, here’s another classic Nazi bondage and torture cover by Eastman, done for the November 1964 issue of MAN’S STORY.

Like many men’s adventure magazine cover paintings, it’s possible, even likely, that Eastman created it before the story was written.

Often, the editors would come up with a concept and attention-grabbing headline — like “RIDE THE NAZIS’ SWING OF AGONY, MY LITTLE ONE!” — and then have an artist do the cover painting before they assigned a writer to concoct some wild story to go with it. 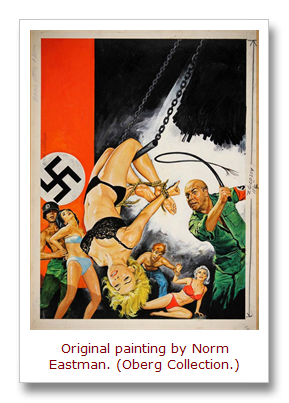 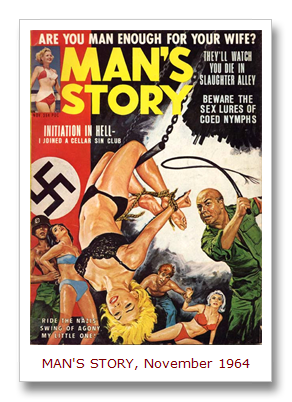