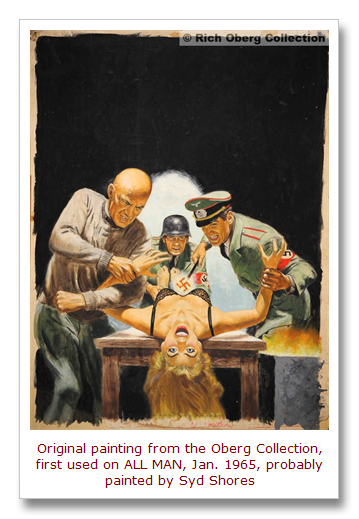 The over-the-top painting at the top of this post is also from Rich’s collection.

It shows a Nazi officer getting ready to burn the heaving chest of a barely-clad babe with a red-hot, swastika-shaped branding iron, as two of his henchmen hold her down.

The officer looks like Steve Holland, an extremely popular male model used by many men’s adventure artists. (He was also the model James Bama used for Doc Savage on the covers of the the Bantam paperback series.)

It first appeared on the cover of the the January 1965 issue of ALL MAN, then on the August 1967 issue of REAL MEN and finally on the October 1973 issue of TRUE MEN STORIES.

I had originally included a photo of this painting in my previous post about Syd Shores, along with the painting below, which was used on the cover of the August 1963 issue of the men’s adventure magazine WAR CRIMINALS. 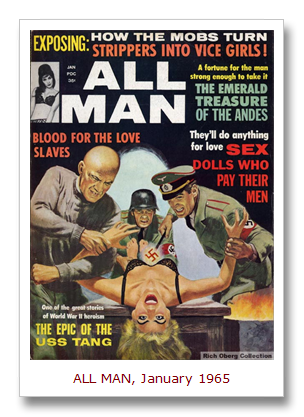 The WAR CRIMINALS painting shows an officer who I think is Nazi propaganda minister Joseph Goebbels in the foreground. In the background, a distressed damsel wearing a bra, panties and a garter belt is being tormented by a bald Nazi henchmen and an officer who also looks to be modeled on Steve Holland.

In my previous post, I had credited both paintings to Syd Shores.

Then I got an email from a very knowledgeable reader of this blog who noted that they looked like Mel Crair paintings to him. So, I decided to remove them from the post until I had a chance to talk to Rich Oberg about them.

What he told me provides some insight into how hard it can be to determine which artist created certain men’s pulp illustrations.

Many cover paintings and interior illustrations in men’s adventure mags went uncredited in the magazines and unsigned by the artists. That’s the case with the two paintings in question.

An expert like Rich and serious fans of the genre can often look at a magazine and recognize the the artist who did the cover painting or some interior illo fairly easily, even when it’s unsigned and uncredited. But not always.

As Rich explained to me, sometimes you need a close look at the original painting to ID the artist. Then you can see nuances in the brush work or other small details that provide telltale clues — things you can’t see by looking at JPEGs of the paintings or covers or even by looking closely at the magazine covers.

In addition, there are sometimes written notes on the front or back of the illustration boards that were used for most men’s adventure magazine art. Those notes can provide information you couldn’t otherwise know. 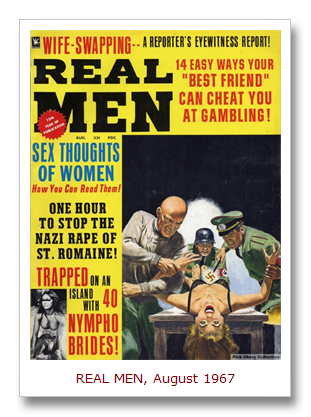 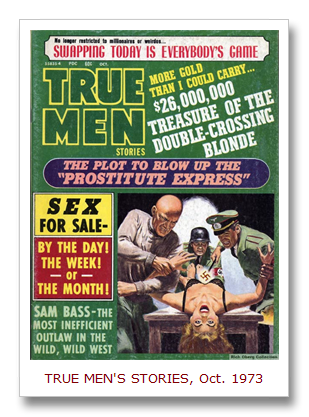 “The unsigned painting used for WAR CRIMINALS does look like some of the paintings Mel Crair did for men’s adventure magazines,” Rich said. “However, Crair typically used a distinctive horizontal brush stroke that feathered the edges a little. When I got that painting, I took a close look and I didn’t see those brush strokes. The brush style look more like Shores. Then, when I looked on the back, I saw ‘Syd Shores’ clearly written in very old-looking pencil, along with other notations that look like they were made long ago when the painting was used. So, I think it probably is a Shores painting.” 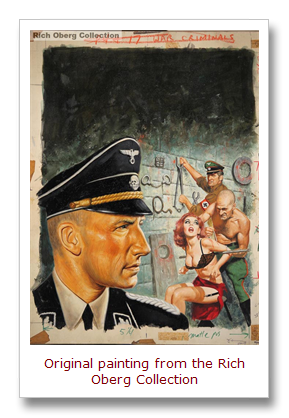 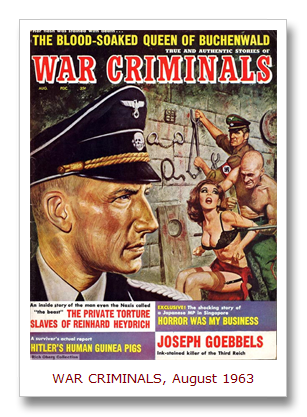 “There’s no artist name written anywhere on the Nazi branding painting,” Rich continued, “but Shores is my best guess that one, too. I know it was done for ALL MAN at a time when Syd Shores was doing other covers for that magazine. Also, when I look at that painting up close and personal and compare it to others by him and Mel Crair, it looks more like Shores than Crair to me.” 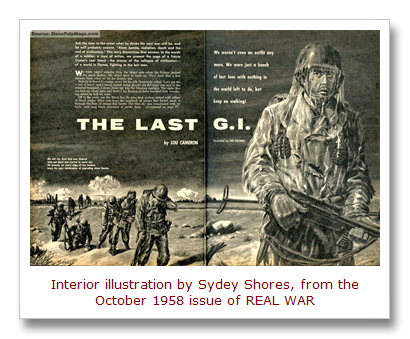 Like most artists who worked for men’s adventure magazines that were published the 1950s, 1960s and early 1970s, Shores did interior illustrations as well as cover art.

At left is a cool science fiction style illo he did for a story by Lou Cameron in the October 1958 issue of REAL WAR, an unusual space-themed issue that I featured in a previous post here.

The story is titled “THE LAST G.I.” It’s an excellent but grim science fiction war story about a group of American soldiers struggling to survive in the middle of a nuclear battlefield.

Interestingly, like Syd Shores, Cameron worked as a comic book artist in the 1950s.

He went on to become a prolific writer whose stories appeared in many men’s adventure magazines. But he’s best known as a novelist.

In fact, Cameron wrote more than 100 novels, maybe as many as 200, ranging from mystery, suspense, action and adventure novels to noir-style pulps and Westerns. Some were published under his real name and some under pseudonyms. (Check out the lists of Cameron novels on the Fantastic Fiction site and on the great Mystery*File blog, written by Steve Lewis.)

This kind of men’s adventure pulp art may not be “classy,” but it sure is classic… 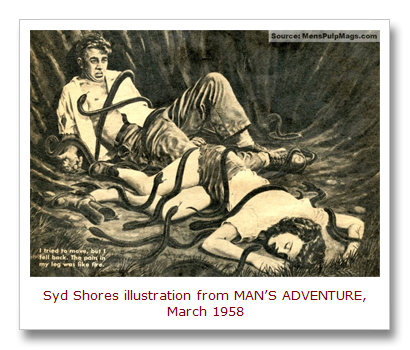 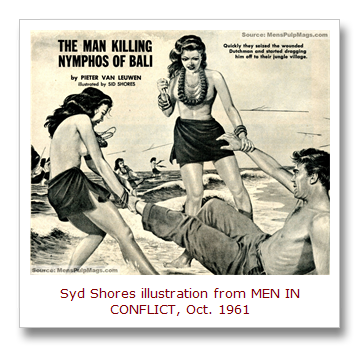