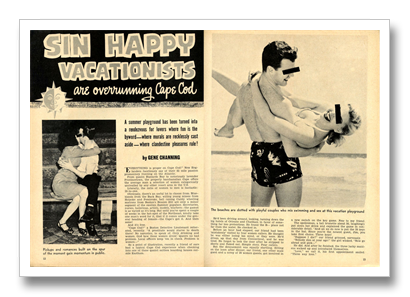 In recent posts, I featured cover paintings by artist Wil Hulsey, starting with his famous “WEASELS RIPPED MY FLESH” cover from the September 1956 issue of Man’s Life.

Tonight’s post provides a look inside that classic issue of one of the best and longest-running men’s adventure magazines.

Man’s Life was published bimonthly by the New York-based Crestwood Publishing Co., Inc. from November 1952 to December 1965, then by Stanley Publications from mid-1966 until 1974.

Two of the guiding hands of Man’s Life during its Crestwood years were Milton Luros and Harold Straubing.

Straubing was the comics editor of the New York Herald Tribute Syndicate in the late 1940s. In the early 1950s, he began a long career as a magazine and book editor and a long association with Luros. 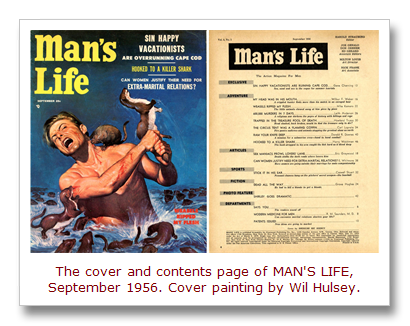 From 1952 to about 1959, Straubing was editor of both Man’s Life and True Men Stories. (True Men Stories was published in those years by Crestwood’s affiliated firm Feature Publications.)

Luros was Art Director for both magazines, though not under that name. He was credited as Milton Louis, a shortened version of his real name, Milton Louis Rosenblatt.

Luros and Straubing’s knack for generating interest-grabbing, envelope-pushing visual and written content was honed during their tenure at Man’s Life and True Men Stories. The September ‘56 issue of Man’s Life is a prime example — starting with the OTT cover painting by Wil Hulsey (who later worked as an artist and art director for several Luros magazines and book companies).

The lead story inside is a classic sexposé: “SIN HAPPY VACATIONISTS ARE OVERRUNNING CAPE COD” by Gene Channing, a writer who penned a number of sex exposes and action stories for men’s adventure magazines in the Fifties and Sixties.

Channing’s credibility-stretching article is illustrated with photos of sin-happy couples in action. As you can see in the scan at the beginning of this post, the happy sinners have those iconic black bands printed over their eyes, ostensibly to protect their identities (though the photos are almost certainly just stock photos).

This is followed by “MY HEAD WAS IN HIS MOUTH,” the first of three killer creature stories in the issue. 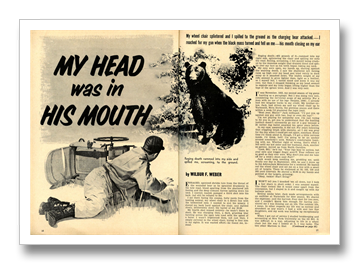 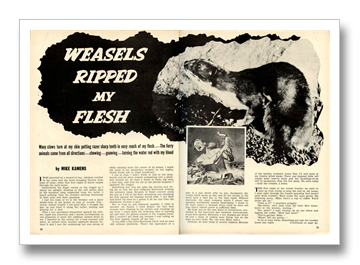 The head in the story belongs to a wheelchair-bound war veteran and the mouth belongs to a Maine black bear. It’s actually a pretty good, supposedly-true survival story, though it’s not quite as wild as the “WEASELS RIPPED MY FLESH” yarn, which really is about a man who’s attacked by vicious weasels.

That legendary tale, credited to Mike Kamens, is also portrayed as a true, first-hand account. Of course, it’s actually pulp fiction, written under a pseudonym, like many of the “true” stories in men’s adventure magazines.

The third killer creature in the September 1956 issue of Man’s Life is a shark, portrayed in the photo that illustrates the story by a small, already dead-looking reef shark. The story itself, titled “HOOKED TO A KILLER SHARK,” is actually better than that pic suggests. 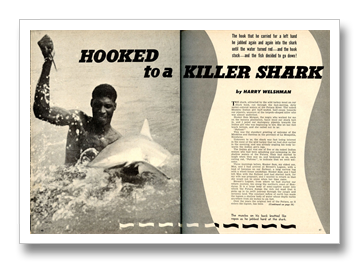 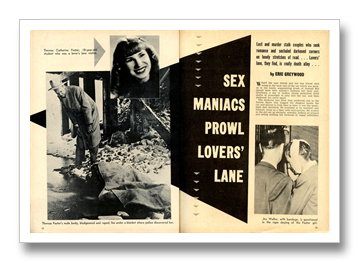 Like many other men’s adventure magazines, the September 1956 issue of Man’s Life also includes a “true crime” story. This one is “SEX MANIACS PROWL LOVERS’ LANE,” which mentions cases involving various pervs and psychokillers, most notably the “Mad Butcher” of Kingsbury Run. It was written by Eric Greywood, who also wrote stories for several vintage true crime and detective mags, including Crime Detective and The Master Detective.

The two most grisly stories in this issue are about real historic events.

“THE CIRCUS TENT WAS A FLAMING COFFIN” is an account of the July 6, 1944 Hartford Circus Fire, in which 168 people were killed. It was one of the most deadly fire disasters in American history.

The story “600,000 MURDERS IN 7 DAYS” has a hugely higher body count. It tells the horrific story of the bloody mass violence that occurred in 1947 when Pakistan was separated from India. 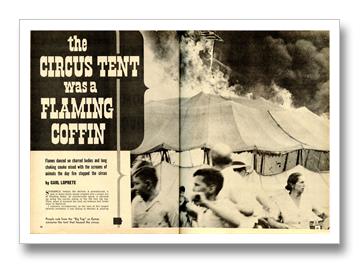 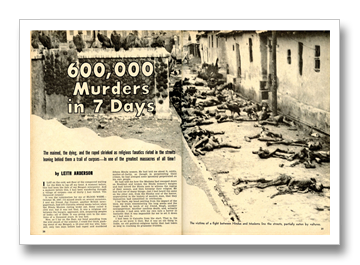 On the lighter side, there’s an article about that venerable baseball tradition, the beanball, titled “STICK IT IN HIS EAR.”

And, of course, as in most men’s adventure magazines, there’s also a cheesecake photo spread. This one features the model and actress Shirley Skiles, whose biggest claim to fame was appearing on the 1964 Disney feature The Tattooed Police Horse. 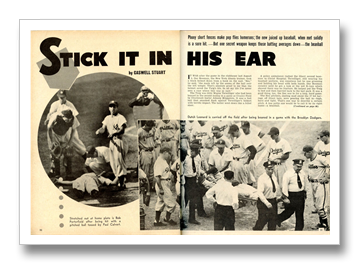 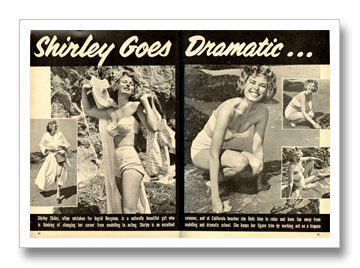 As you can see, the photos of Shirley are pretty mild cheesecake. In the mid-1950s, showing too much skin was one of the reasons the U.S. Postal Service could use to take away a magazine’s second class mail permit, which would usually kill the magazine. (See my previous post about Gusto magazine.)

However, back then, an exception was made for photos of “natives girls” with exposed breasts. They came under what my friends and I called “the National Geographic rule.” Thanks to that rule, a photo in another story in the September 1956 issue of Man’s Life shows a young Mexican girl topless.

The story, titled “TRAPPED IN THE TREASURE POOL OF DEATH,” is actually a pretty good Indiana Jones-style adventure tale about a treasure hunter who nearly bites it in a quest for valuable Mayan relics. 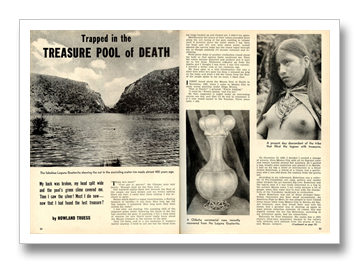 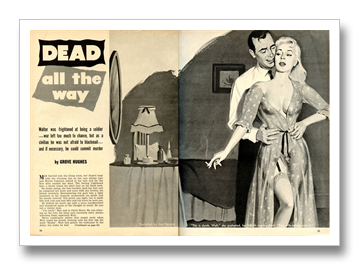 There’s also a good noirish pulp tale in this issue, “DEAD ALL THE WAY.” It features a sleaze-paperback style illustration by an uncredited artist.

Of course, part of the fun of reading old men’s adventure magazines today is checking out the ads. One of my favorites in this issue is the ad for the “Bubble Boy” with the, uh, “MYSTERIOUS MAGIC ACTION.”

Another is the “BETTER HAIR THRU BODY CHEMISTRY” ad. It has a truly unusual photo and an odd-looking diagram in the middle that seems like it should be in the “Bubble Boy” ad. 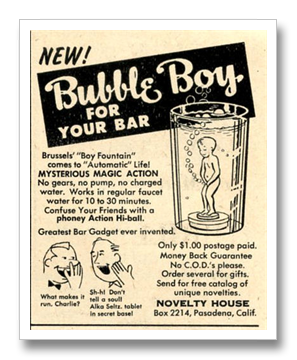 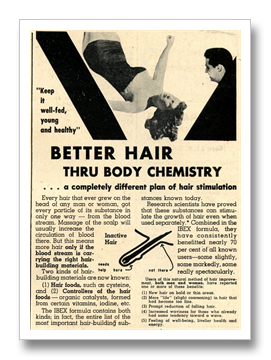 The full-page ad on the back inside cover also caught my eye. It’s for the U.S. School of Music. I couldn’t help but notice the guy in the upper left corner who’s playing an accordion, above a caption that reads: “Opened Door to Popularity.”

It reminded me of one of my childhood traumas, immortalized in the dramatic photo shown below.

Yes, folks, that’s me, playing an accordion. My parents really liked Lawrence Welk and Myron Floren. Oh, the horror when I found out a few years later that most teenage girls weren’t actually attracted to accordion-playing geeks. 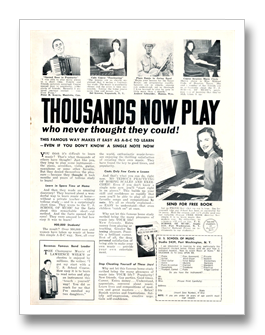 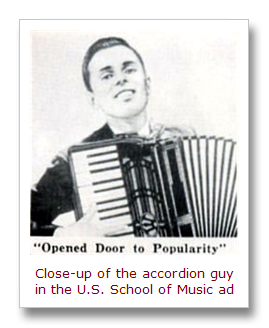 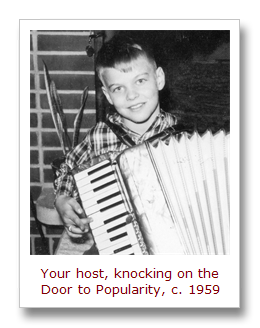 BTW, if you want to read the September 1956 issue of Man’s Life for yourself, it’s available in high-rez PDF format in my Payloadz store for $2.99. Just click this link to download it.