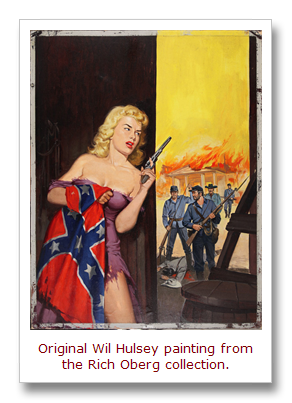 Although artist Wil Hulsey may be best known for the animal attack cover paintings he created for vintage men’s adventure magazines, especially his famed “Weasels Ripped My Flesh” cover, he was equally good at creating other types of action and adventure scenes.

I showed some nice examples in my previous post, which featured photos of some of the original Hulsey “Good Girl Art” cover paintings from the Rich Oberg Collection.

The painting at left is another Hulsey original owned by Rich. 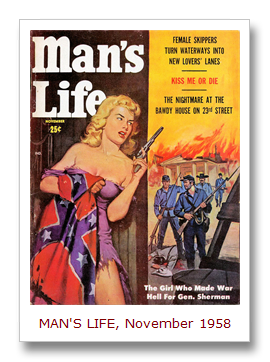 It was used on the cover of the November 1958 issue of Man’s Life magazine.

Hulsey’s cover painting for the November 1958 issue of Man’s Life is a great example.

Your eyes can’t help but be initially drawn to the beautiful, scantily-clad blonde in the left half of the painting, who has her back to a barn door and a concerned but determined look on her face.

The reason our Rebel belle is hiding in the barn is apparent when you look at the right half of the painting. Her Southern plantation style mansion is in flames in the background.

The Yankee soldiers who set it ablaze are walking toward the barn, past the body of a dead Confederate soldier. When you look at the cover of the magazine and see the title of the story the painting goes with — “The Girl Who Made War Hell For Gen. Sherman” — you know the belle’s home is one of those torched during Sherman’s “March to the Sea.”

Do I love that cover painting? Hell, yeah. 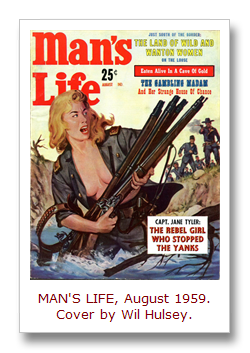 Aside from the fact that I’m a major fan of Hulsey’s artwork, I have been a Civil War history buff ever since I was a kid in the 1950s and 1960s.

From the late ‘50s to the mid-1960s, the American Civil War was a popular topic in books, magazines, TV shows and movies. 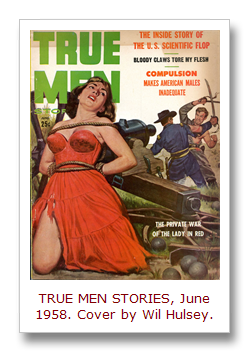 Men’s adventure magazines joined in with their own unique brand of Civil War stories and artwork, which mixed a bit of history with some rousing action, adventure and violence, spiced up with some beautiful women and mild sex scenes.

To my knowledge, Hulsey created at least four Civil War cover paintings for the two men’s adventure mags he did most of his work for: Man’s Life and True Men Stories.

His cover for the August 1959 issue of Man’s Life features another blonde Rebel bombshell, baring a goodly amount of cleavage in her unbuttoned Confederate blouse. She’s “CAPTAIN JANE TYLER: THE REBEL GIRL WHO STOPPED THE YANKS.”

The bound lady in red featured in Hulsey’s painting on the June 1958 issue of True Men Stories is a not a Reb. She’s a spy for the Yankees, in the story “THE PRIVATE WAR OF THE LADY IN RED.”

So is the babe on the cover of the December 1959 issue of True Men Stories. In the men’s pulp mag alternate history of the Civil War, she is “THE BEAUTIFUL YANKEE SPY WHO SEDUCED HER FIRING SQUAD.”

The original painting shown next to that cover below is another one of the original Hulsey paintings that’s owned by Rich Oberg and shown here courtesy of Rich. (Thanks, as always, amigo!) 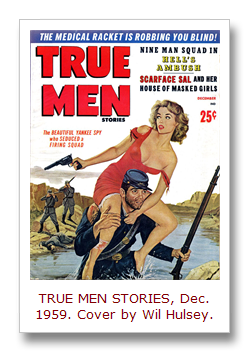 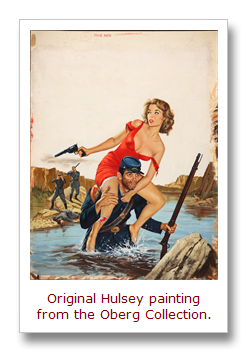 Mort Kunstler, another great artist who worked for men’s adventure magazines, went on to become famous for his Civil War art. I’ve done several posts here about Mort’s magazine art and I think his highly-popular Civil War paintings are superb.

But I gotta admit, I have a special fondness for the much less well-known, sexy Civil War paintings done by Wil Hulsey.

And, since 2011 is the 150th anniversary of the beginning of the American Civil War, I’ll make this post my contribution to that observance (along with my recent post on This Day in Quotes).