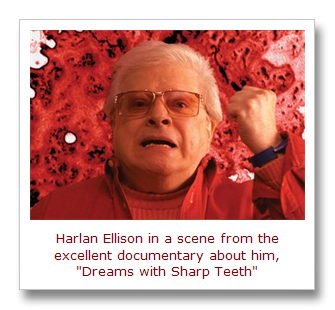 Harlan Ellison is most often associated with science fiction.

That’s understandable, of course. He is the author of some of the greatest science fiction stories ever written, like “‘Repent, Harlequin!’ Said the Ticktockman” (1965) and “A Boy and His Dog” (the 1969 short story made into a film in 1974). He also wrote legendary screenplays like the “Demon with a Glass Hand” episode of Outer Limits (1964) and the revered “The City on the Edge of Forever” episode for Star Trek (1967).

In addition, Harlan Ellison has edited some of the world’s most famous anthologies of science fiction short stories, like the game-changing collection Dangerous Visions (1967).

But during his long career as a professional writer, which began in earnest in the mid-1950s, Harlan has actually written many different types of fiction and non-fiction.

In the ‘50s and ‘60s, he wrote dozens of short stories for popular mystery, crime and detective magazines, such as The Saint and Crime and Justice Detective Story Magazine. He wrote even more fiction and non-fiction stories and articles for men’s bachelor magazines, like Playboy and Rogue. (He was also an Associate Editor of Rogue in the early 1960s.)

Along the way, Harlan also had a few stories published in men’s adventure magazines. However, those have not been reprinted and were essentially “lost” — until recently.

Last last year, on this blog, I mentioned two Harlan Ellison stories I was surprised to find in men’s adventure magazines: “I Raped Freedom in Budapest,” a faux, as-told-to “true story” published in the August 1957 issue of Battle Cry and “Death Climb,” a noir thriller first published in the February 1957 issue True Men Stories. 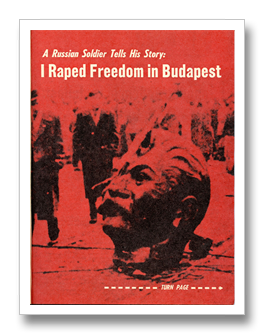 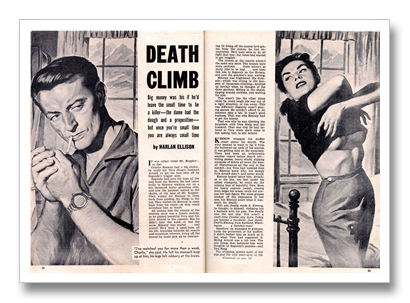 I was even more surprised when Harlan Ellison contacted me, after someone told him I’d mentioned those stories.

In his own inimitable, mind-blowing, curmudgeonly way (see the documentary Harlan Ellison: Dreams With Sharp Teeth if you don’t know what I mean), Harlan regaled me with tales of his days in New York City in the late 1950s, when he was writing stories for virtually every type of magazine — including men’s adventure magazines and even women’s “True Confessions” style mags.

Harlan also told me some stories about famous writers, actors and directors he knew and hung out with after he moved to California in 1962.

In between laughing, being amazed and making sure my tape recorder was working, I asked Harlan if I could reprint the stories he’d written for men’s adventure magazines.

He said his story “I Raped Freedom in Budapest” is scheduled to be reprinted for the first time in an upcoming book, so he wanted me to wait on that one.

But he graciously gave me permission to reprint “Death Climb” and another lost Ellison tale I recently found in a 1958 issue of Exotic Adventures magazine, titled “The Island of Tyooah.”

I must note that I paid Harlan for the online reprint rights to those stories. And, he was very nice about making it affordable for me.

But for Harlan, paying the writer is a matter of longstanding principle. Actually, let me correct that by quoting what Harlan said in a press release when he sued Paramount in 2009 for continuing to make tons of money from the original Star Trek episodes without paying any additional fees to him and other writers who provided scripts for the series:

“F- – – -in’-A damn skippy! I’m no hypocrite. It ain’t about the ‘principle,’ friend, its about the MONEY!…Pay me and pay off all the other writers from whom you’ve made hundreds of thousands of millions of dollars…from OUR labors…just so you can float your fat asses in warm Bahamian waters. The Trek fans who know my City screenplay understand just exactly why I’m bare-fangs-of-Adamantium about this.” 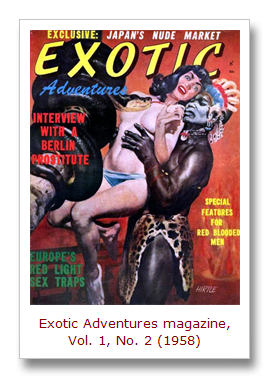 So, damn skippy, I paid Harlan for the online reprint rights to “Death Climb” and “The Island of Tyooah.”

I also signed a contract outlining how I would make those stories available, in a password-protected PDF format with the proper copyright information.

With this post, I am making them available online for the first time. In future posts, I’ll tell you more about the stories and relate some anecdotes Harlan told me.

Both stories are now available to download via Payloadz, by clicking the links below:

And, yeah, damn skippy, you gotta pay to read them. Not much — just 99 cents each. But hell, do you think I would write this blog just to get calls from guys like Harlan Ellison?