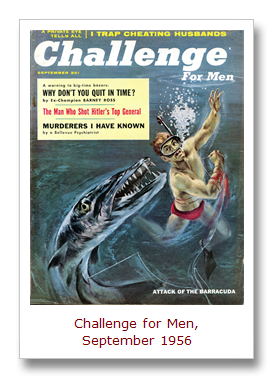 The September 1956 issue of Challenge for Men is especially good (and well worth snagging if you see it on eBay).

Even the cheesecake photo spread inside is better than average.

It features the gorgeous Swedish actress Anita Ekberg, rather than some unknown, semi-attractive “model.”

In addition, the story about Ekberg that goes with the photos was written by one of America’s great modern humorists, Art Buchwald.

His Ekberg piece is titled “The *9 hills of Rome!” — with an asterisk in front of the number nine.

In small type next to the asterisk at the bottom of the page is a Buchwald-style pun playing off the notoriety of the famed Seven Hills of Rome and Ekberg’s biggest, er, assets. 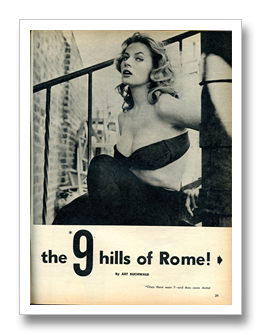 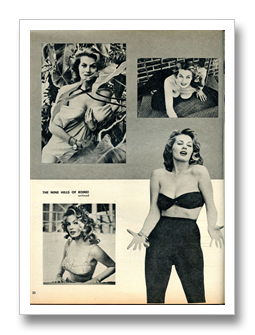 Like most men’s adventure magazines of the 1950s and 1960s, the September 1956 issue of Challenge for Men also had quite a few correspondence school ads, including a funnier than usual full-pager for LaSalle Extension University that has the headline: 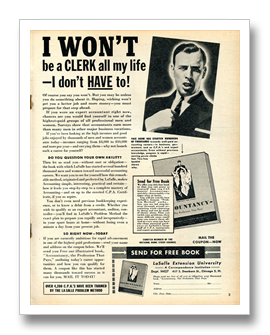 That’s right! All you had to do was send in the form to get your free illustrated book “Accountancy, the Profession That Pays.” Then, you’d be on your way to having an adventurous job as an accountant instead of a clerk. (And, you know, women like Anita Ekberg just can’t resist men wearing green eyeshades.)

This issue of Challenge for Men also has an outstanding barracuda attack cover painting, done by an uncredited artist for the story “I WAS ‘CUDA BAIT.”

As a diver, I’ve seen many barracuda. I know they can be dangerous if provoked or if you’re stupidly carrying around a stringer of bloody fish underwater. But most people tend to view barracuda as being more of a threat to humans than they really are.

By far, the scariest fish in this issue of Challenge for Men is Albert Fish — the real-life psycho killer and cannibal. He’s one of several wackos profiled in an article by Bellevue psychiatrist Joel C. Charles, titled “MURDERERS I HAVE KNOWN.”

In the article, Charles notes that he dealt with the infamous Fish twice. The first time was in 1931, when Fish was being held for observation at the Bellevue psychiatric unit after sending obscene letters to a young girl.

In that case, Fish was ultimately set free, since no physical harm had been done to the girl and there was no other evidence against him at the time. 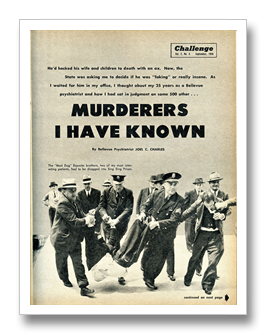 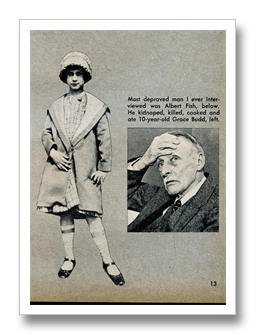 In the article, psychiatrist Charles paints a chilling picture of Fish and discusses several other murderers he interviewed at Bellevue. (You can download and read the entire piece in PDF format by clicking this link.)

Fish is definitely the creepiest. In addition to killing at least 15 young kids and attacking scores of others, Fish was also into self mutilation.

Charles says in the article:

“X-RAYS revealed that during the previous seven years Fish had inserted no fewer than 29 needles and pins in his own pelvis and abdomen…He said he had been ordered ‘by God’ to castrate little boys, and once he’d attempted to castrate himself. Relatives said that he often beat himself bloody with nail-studded paddles. In addition to cannibalism, he admitted that he frequently practiced coprophagia (the eating of human excrement) and drank human blood.”