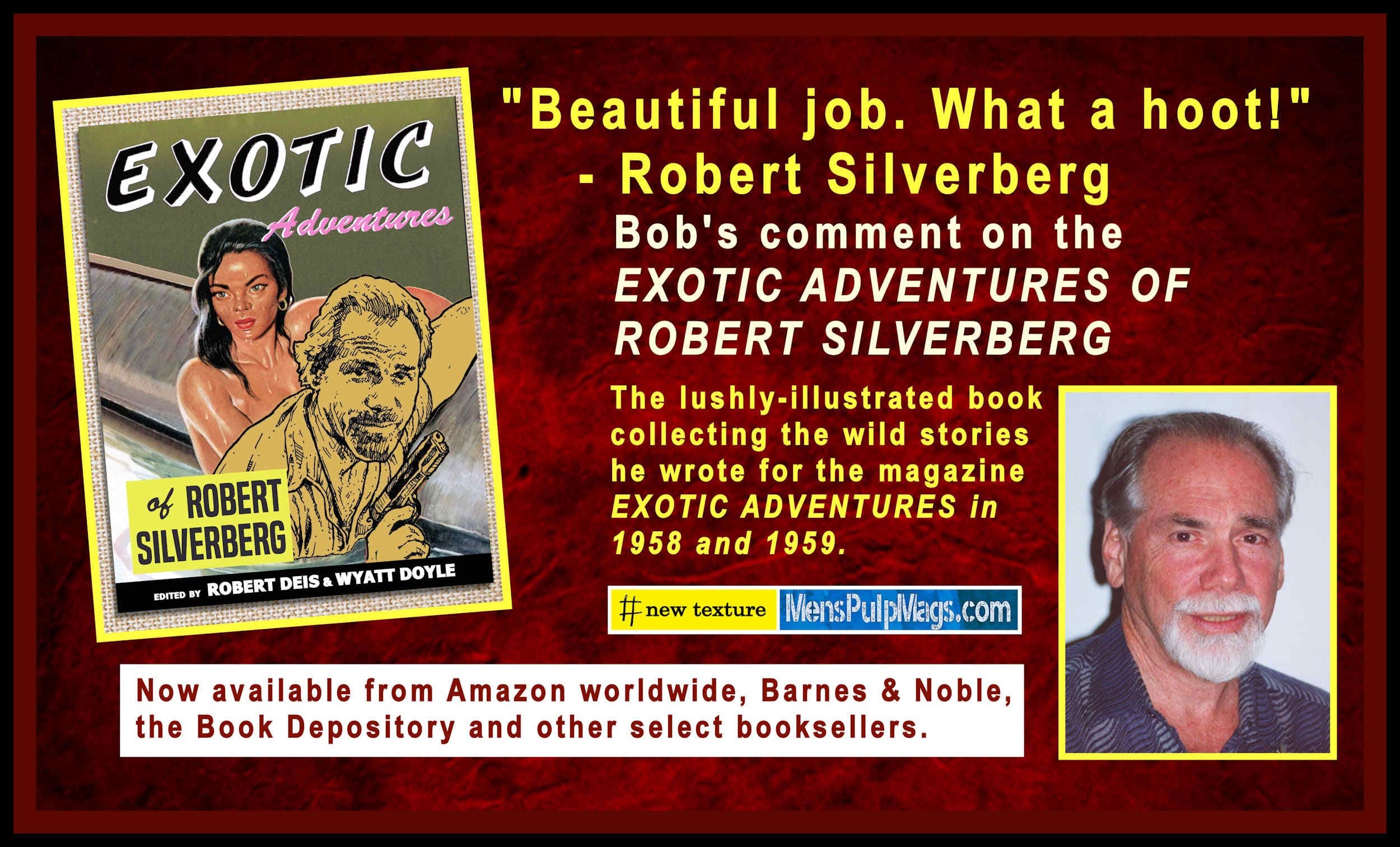 I’m very happy to announce the release of the 13th book in the Men’s Adventure Library series I co-edit with Wyatt Doyle.

This one is a lushly-illustrated anthology of wild, often racy adventure stories written by Silverberg under various pseudonyms in 1958 and 1959 for the short-lived magazine EXOTIC ADVENTURES.

Robert Silverberg is, of course, renowned as one of the world’s greatest authors of science fiction stories and novels. He’s beloved by millions of readers worldwide for his work in that genre and has received virtually all of the top honors given to writers in the realm of speculative fiction, including multiple Hugo Awards and Nebula Awards and induction into the Science Fiction and Fantasy Hall of Fame.

As knowledgeable Silverberg fans know, his long career as a writer includes many books outside the realm of science fiction.

Some years ago, I ran across an internet post that mentioned he’d written stories for EXOTIC ADVENTURES. Eventually I found copies of all six issues. Then I also contacted Bob and asked him if he would ID which of the stories in them were his and allow me to reprint them. He graciously agreed.

The result, officially released on May 24, 2021, is our book EXOTIC ADVENTURES OF ROBERT SILVERBERG.

The cover of the book is adapted from a painting by artist Rafael DeSoto featured on the cover of the first issue of EXOTIC ADVENTURES. It shows an American soldier holding a pistol and wading through a river with an overturned canoe, accompanied by a beautiful native girl. (It’s one of four uses of DeSoto’s painting on men’s mag covers.) 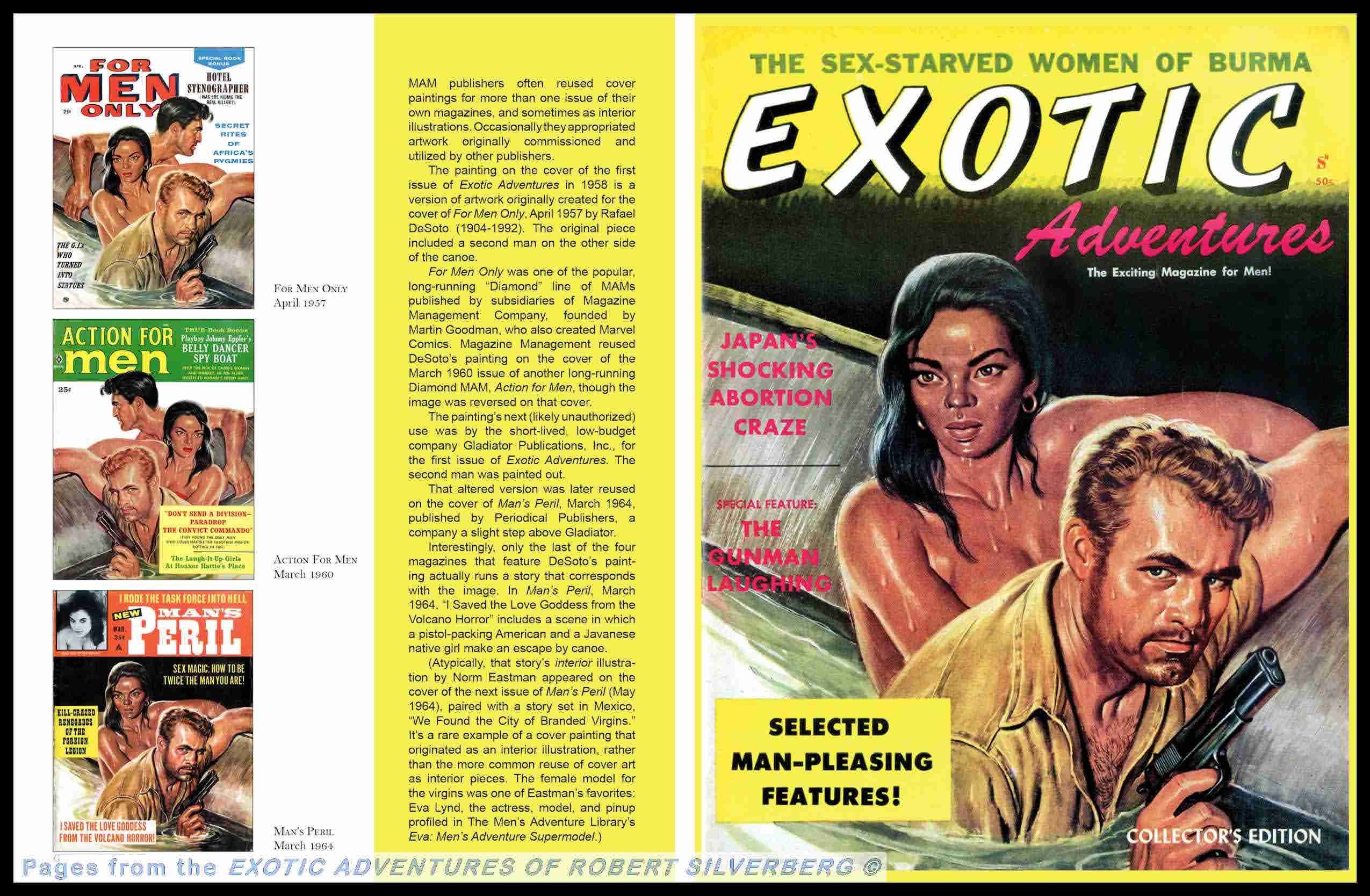 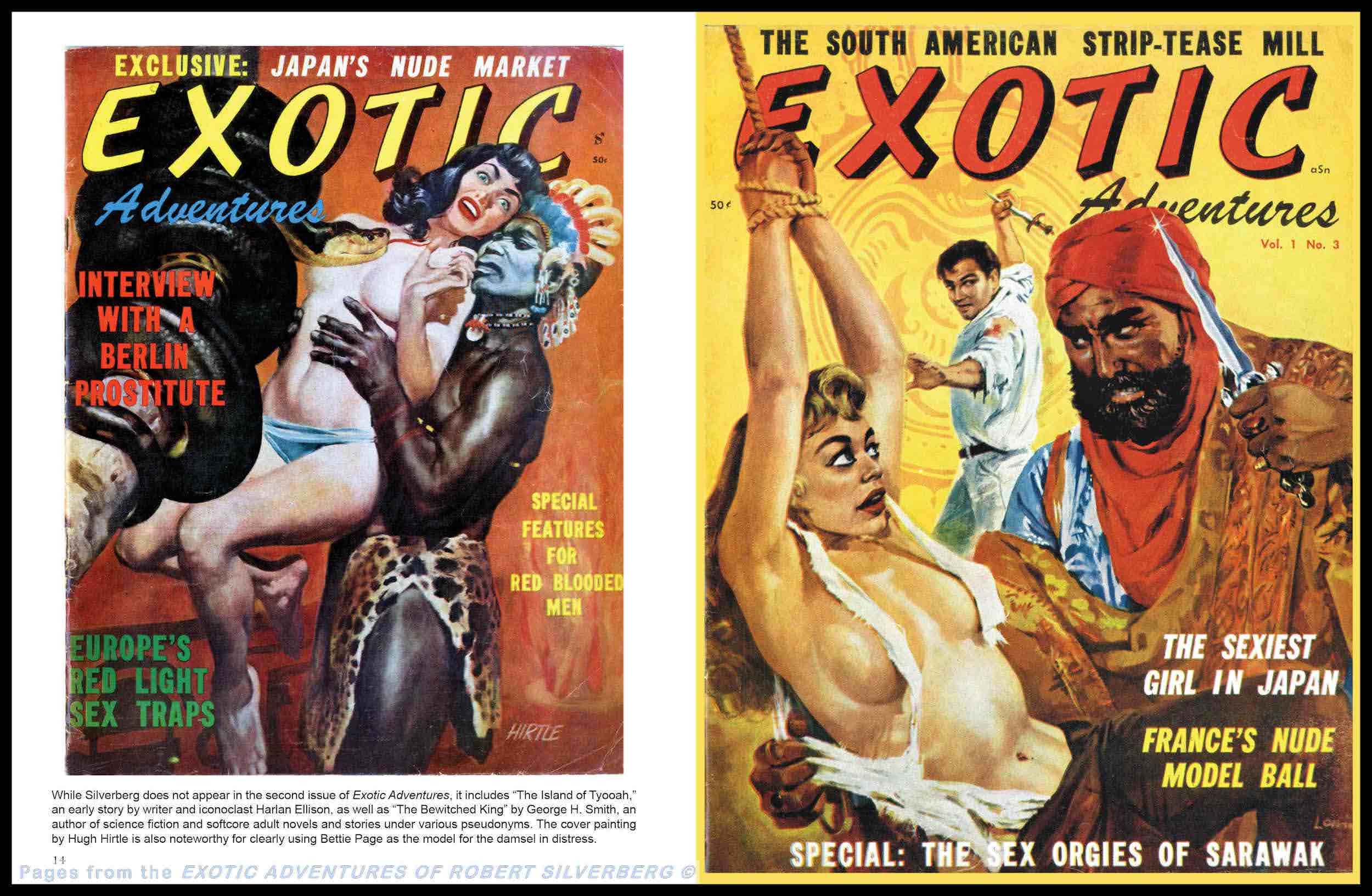 Wyatt had his friend artist and musician Jimmy Angelina create a drawing of Bob Silverberg that he could overlay in place of DeSoto’s soldier for the book cover. (You can see more of Jimmy’s artwork in two cool books he did with Wyatt Doyle THE LAST COLORING BOOK and THE LAST COLORING BOOK ON THE LEFT, and get on his self-titled album here.)

The approach Wyatt used for the interior layout of EXOTIC ADVENTURES OF ROBERT SILVERBERG is also special. It’s a large format (8 1/2 x 11”) book with full-color reproductions of the EXOTIC ADVENTURES covers and scans of all the interior illustrations and photographs used for the stories. As an added touch, Wyatt included examples of the vintage ads and cartoons from EXOTIC ADVENTURES, creating a dynamic facsimile presentation that gives readers a feel for what it was like to read the magazines themselves. 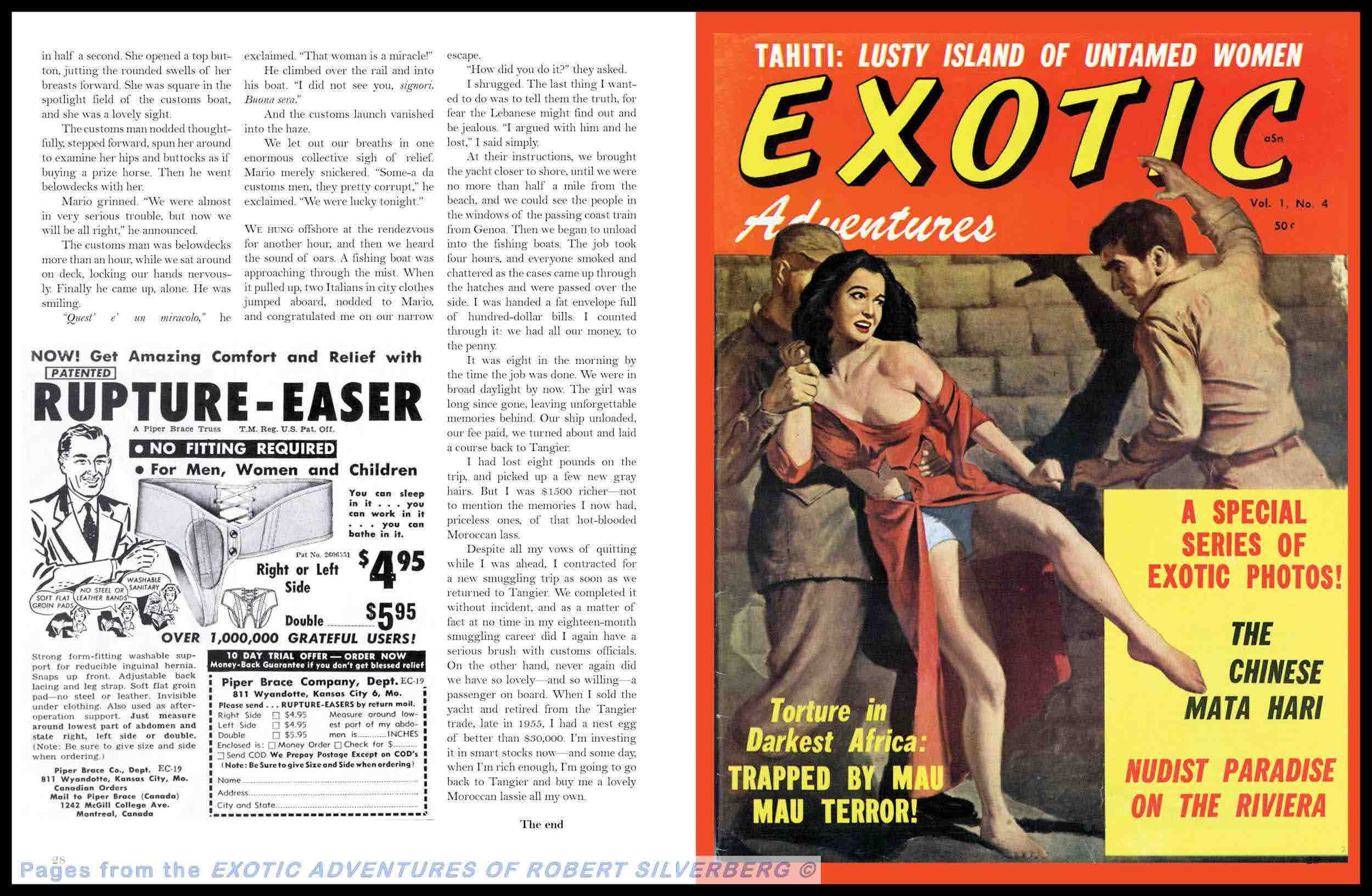 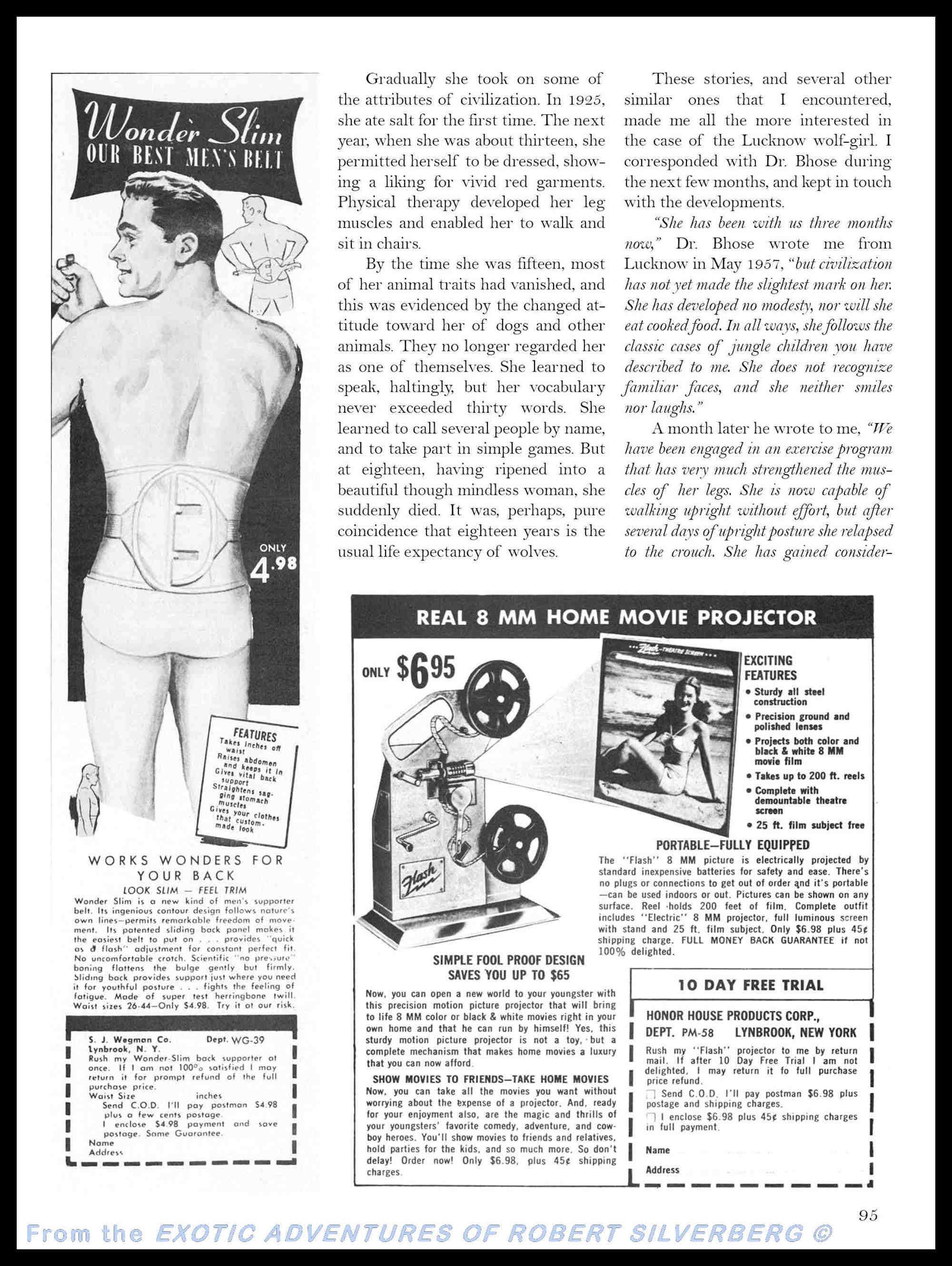 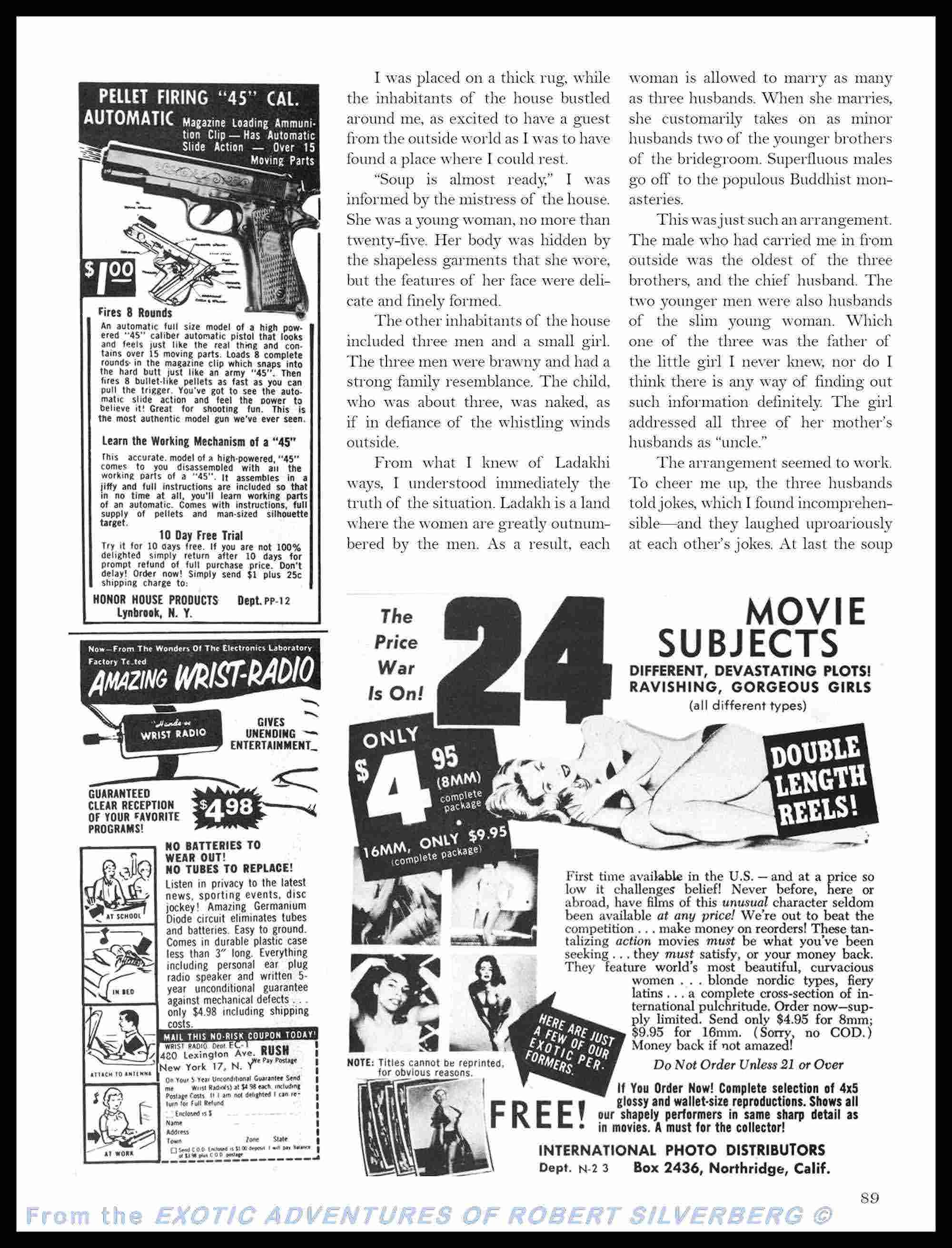 Although these Silverberg EXOTIC ADVENTURES tales are not science fiction, most could be called fantasy — or, more specifically, men’s action/adventure fantasy.

EXOTIC ADVENTURES was a sort of hybrid between a classic men’s adventure magazine and a PLAYBOY-style men’s bachelor magazine. 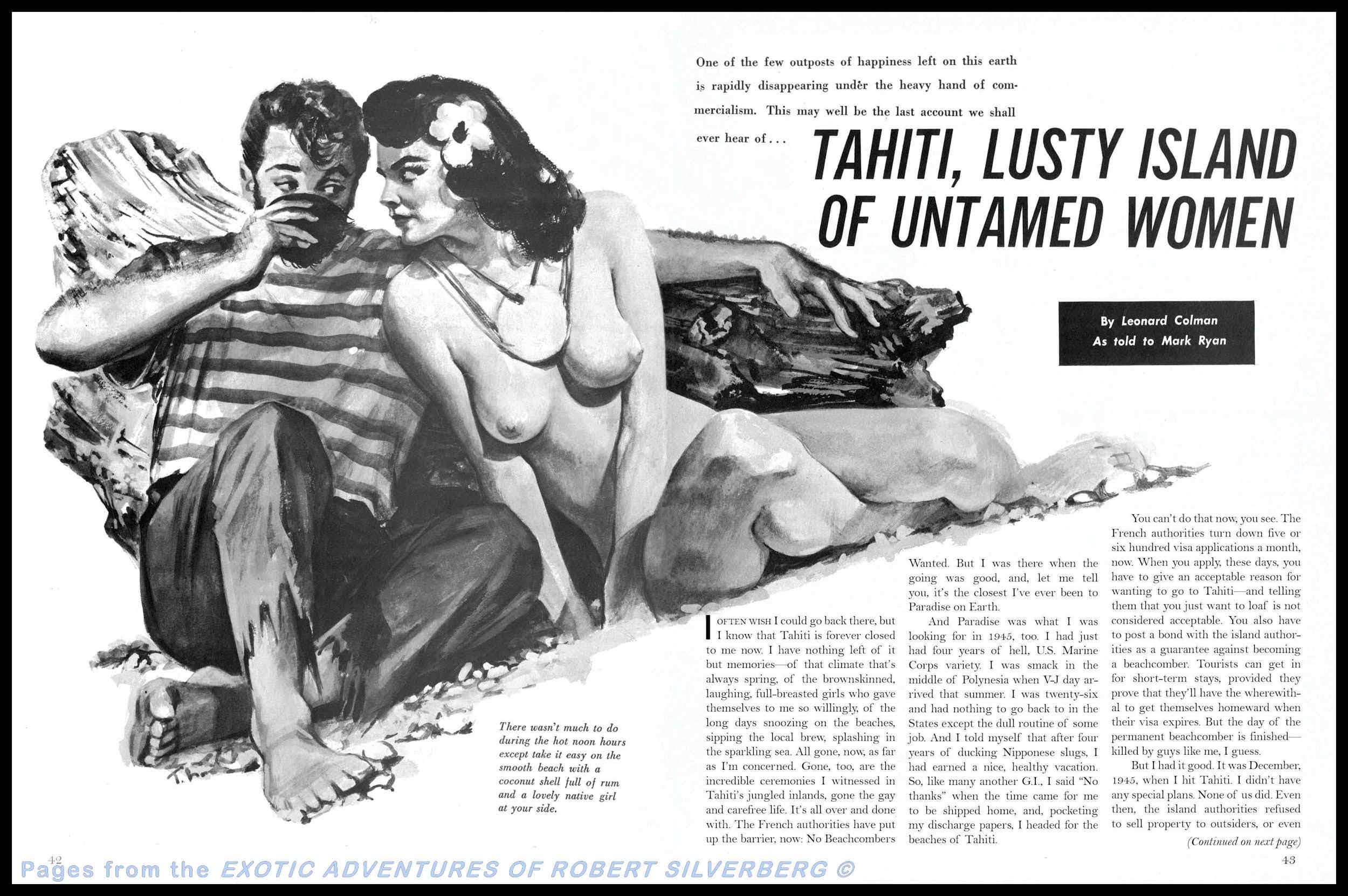 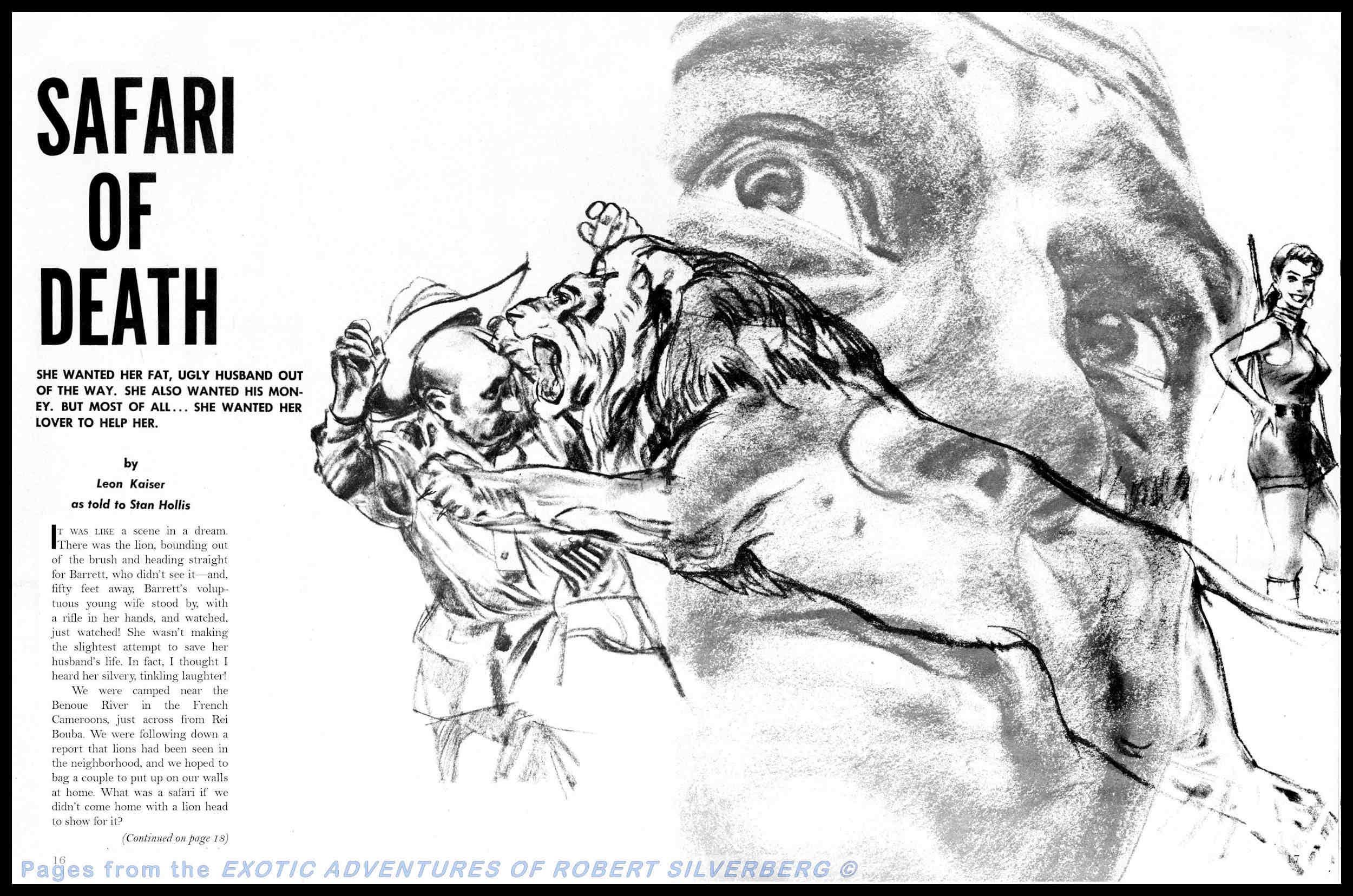 The stories were the similar to the action, adventure and travel stories common to most MAMs.

However, they had a somewhat higher quotient of sex scenes, and the sex was described a bit more explicitly than was common in MAMs in the late 1950s. 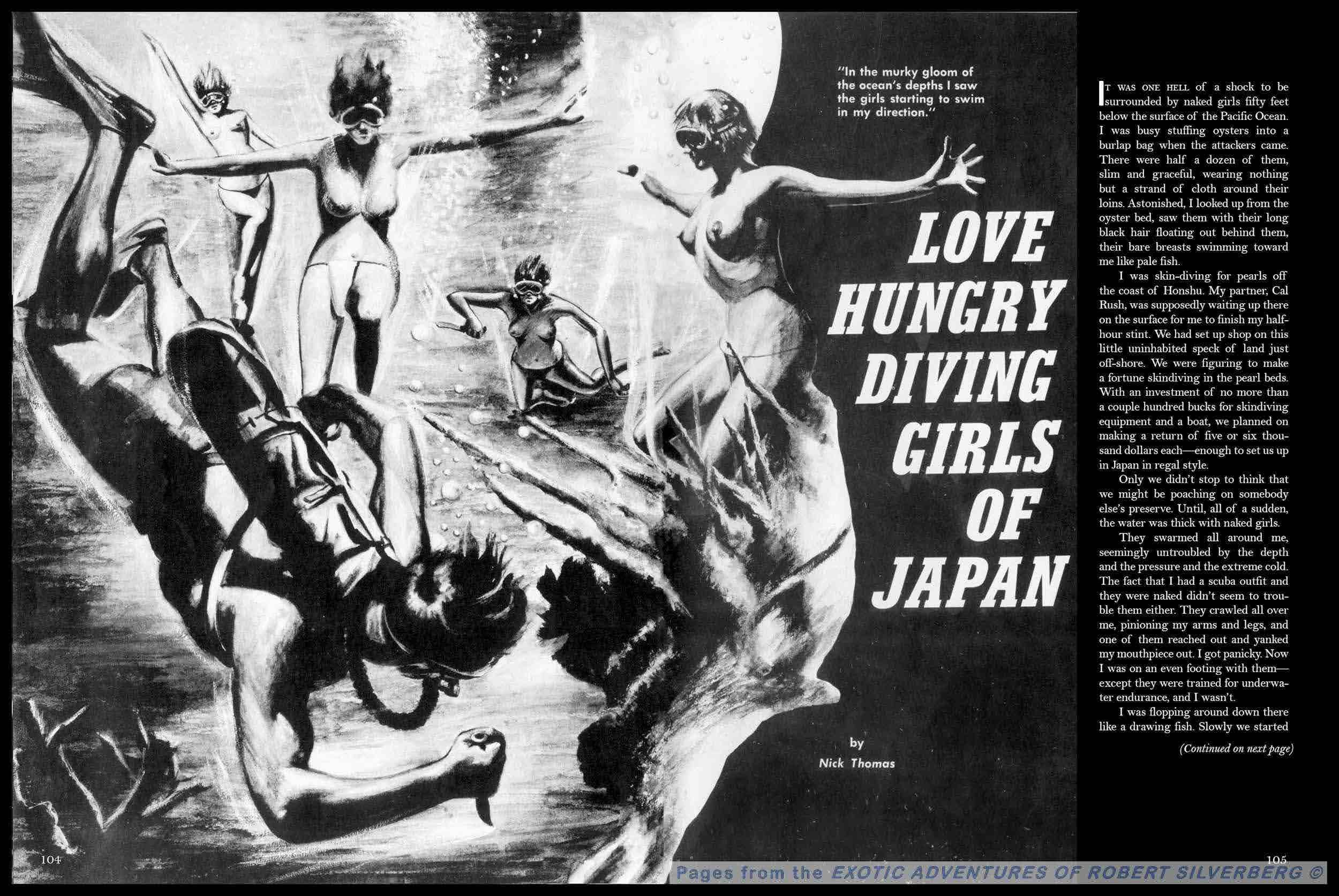 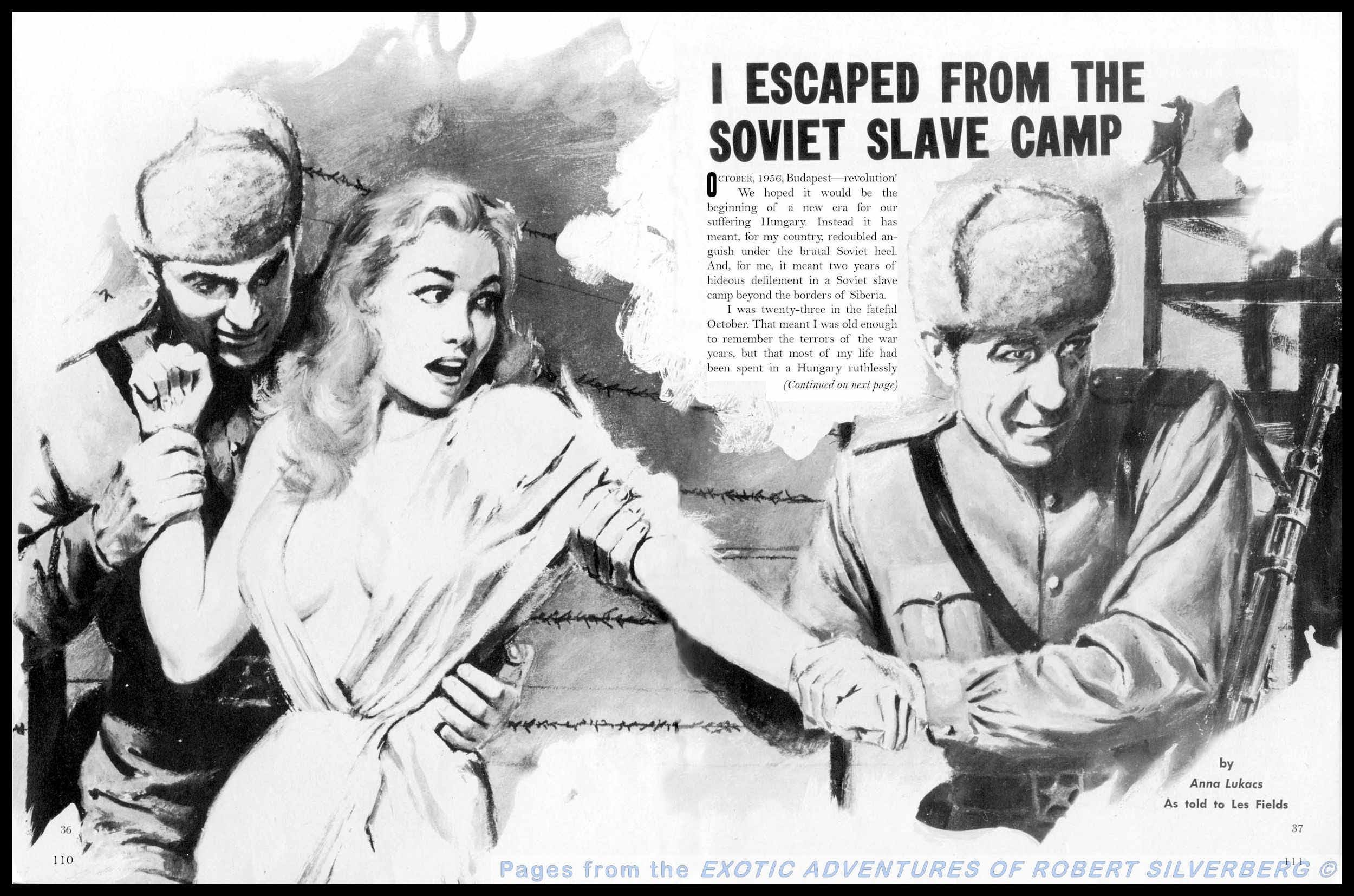 In addition, as you can see by the page scans from book shown in this post, the artwork used in EXOTIC ADVENTURES show more bare breasts than you’ll find in the illustrations in most MAM published in 1958 and 1959.

That doesn’t mean the stories or artwork are pornographic. The sex scenes are generally brief and aren’t really the focus of the stories. But Silverberg’s EXOTIC ADVENTURES tales are infused with a bit more sexual heat than fiction published in typical men’s adventure mags in the late ’50s. 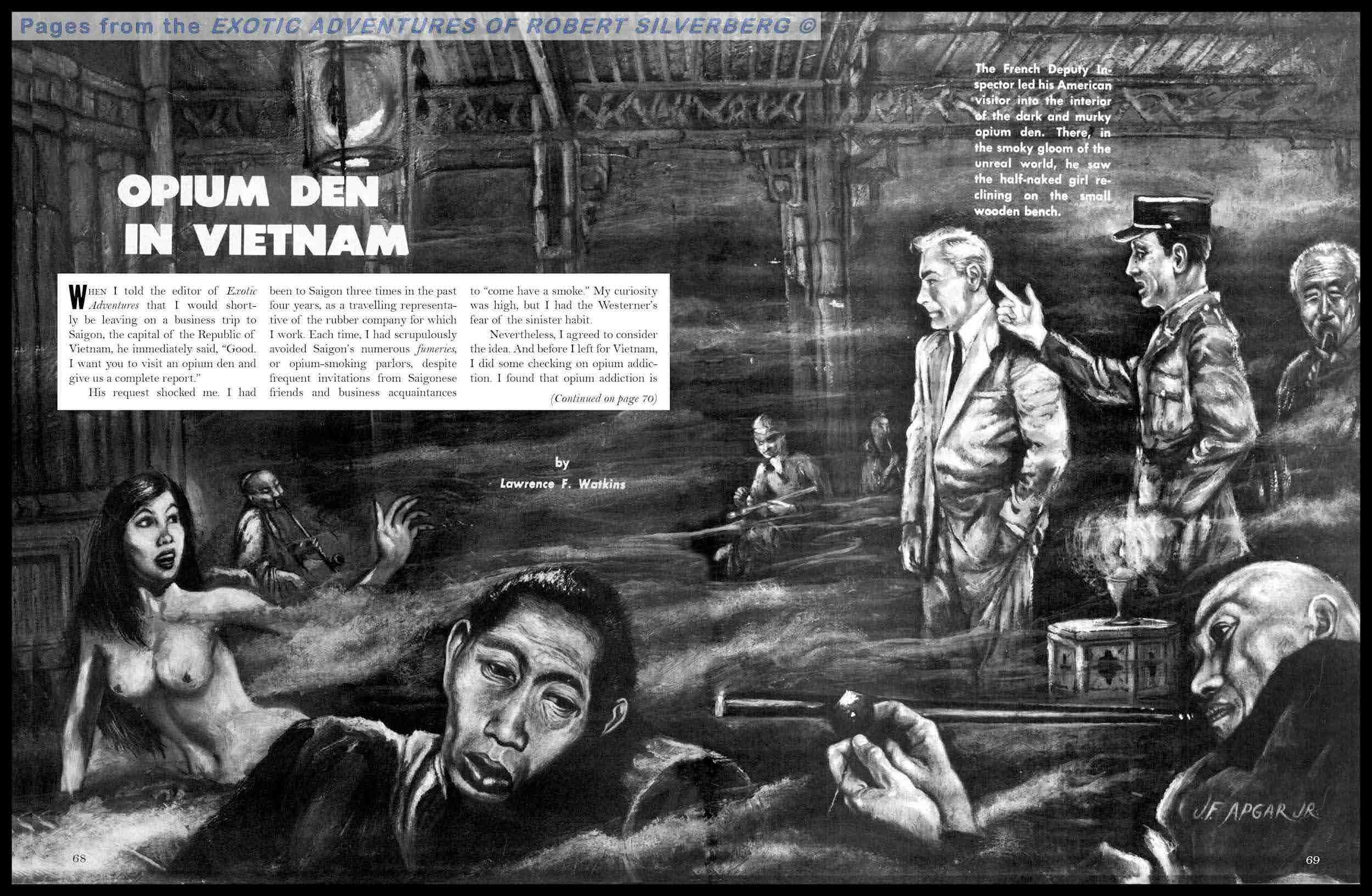 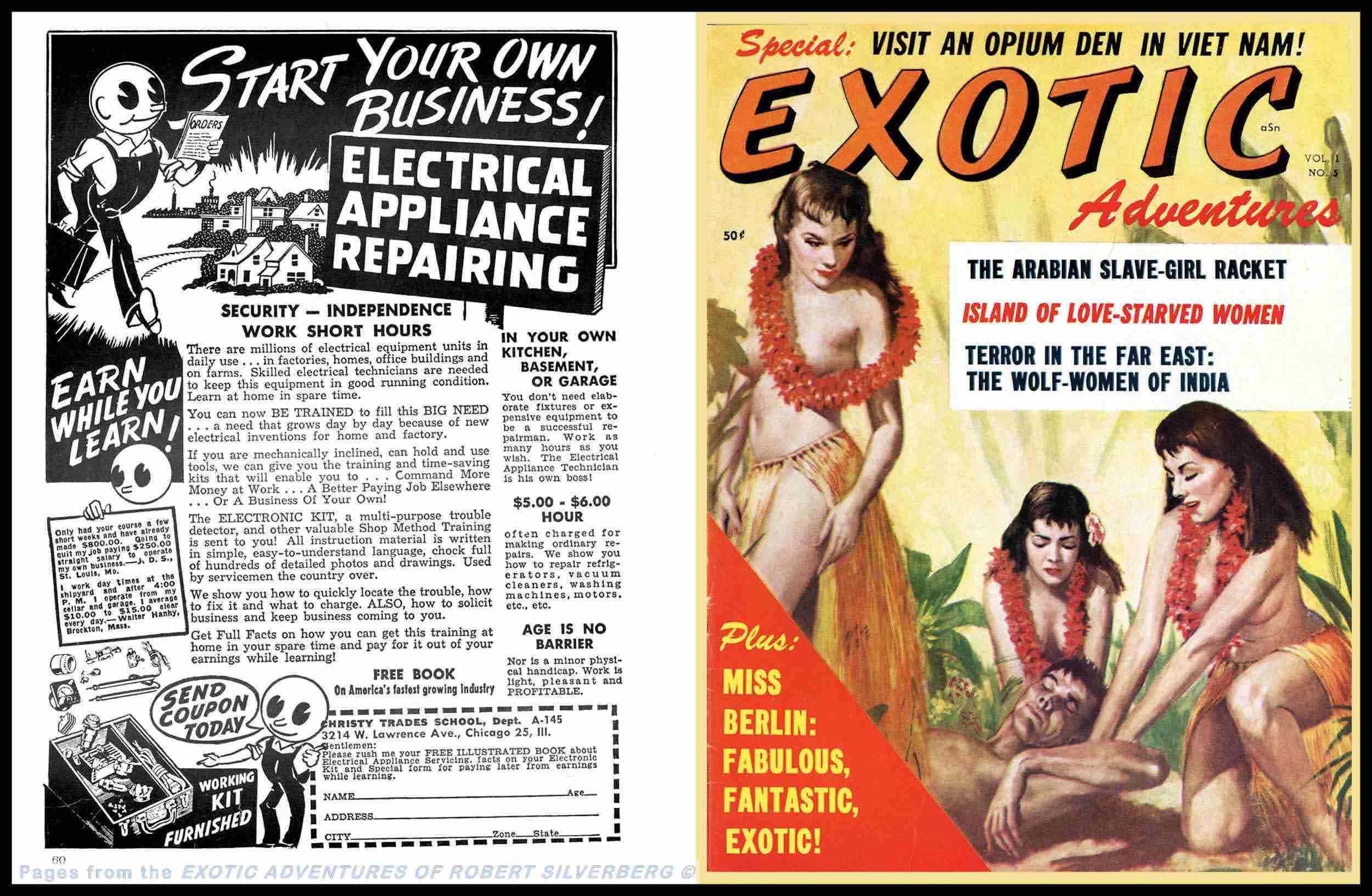 As Bob explains in the introduction to the book: “Everything was done by euphemism and metaphor. No explicit anatomical descriptions were allowed, no naughty words.”

Of course, the stories are politically incorrect by today’s standards, due to aspects that reflect the type of sexism and racism common in almost all media in the 1950s. But, as Bob notes: “I was writing those stories more than sixty years ago for the readers of that era and in the manner of that era. Modern political correctness can’t be applied retroactively to things written so long ago.” 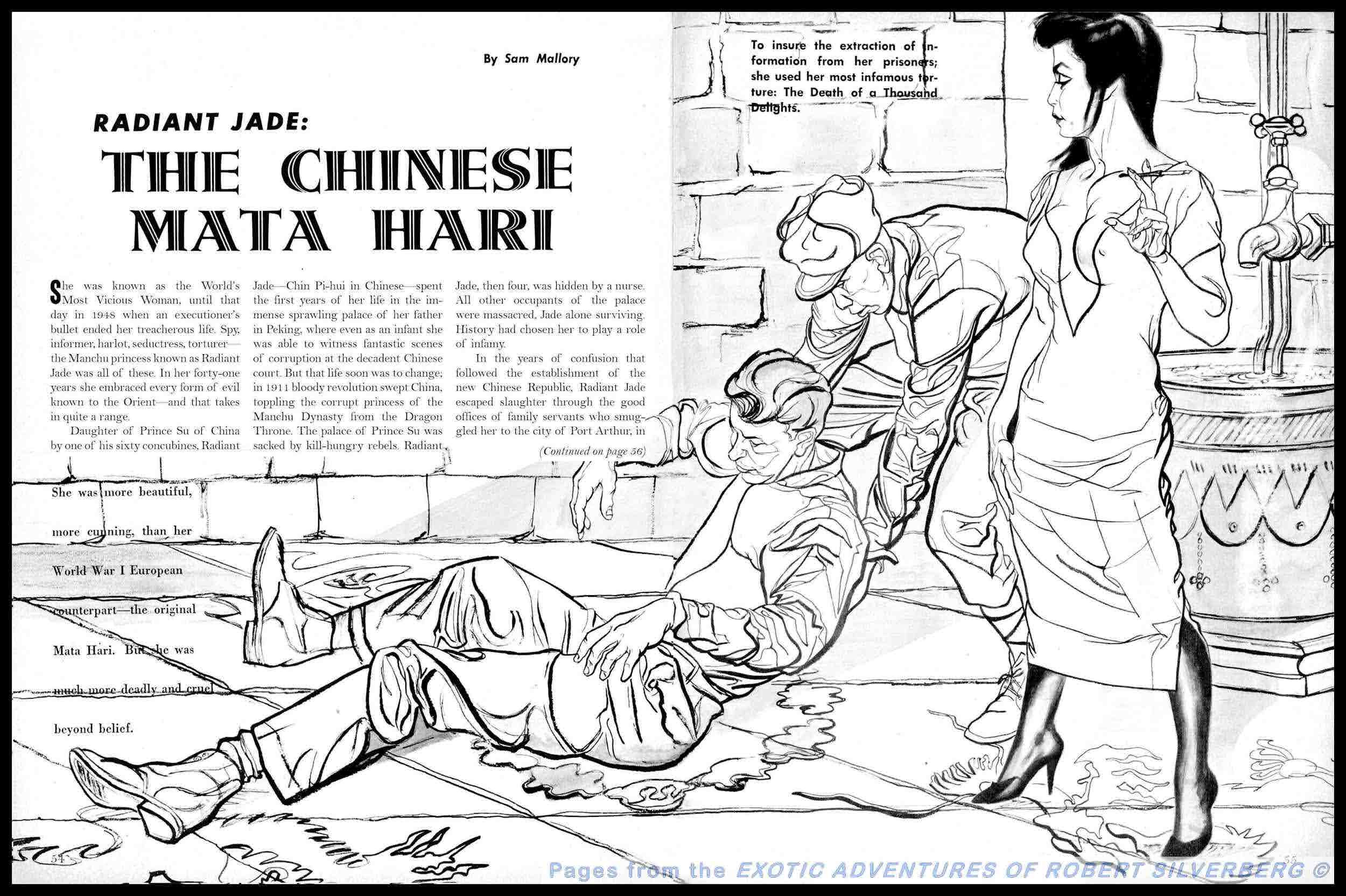 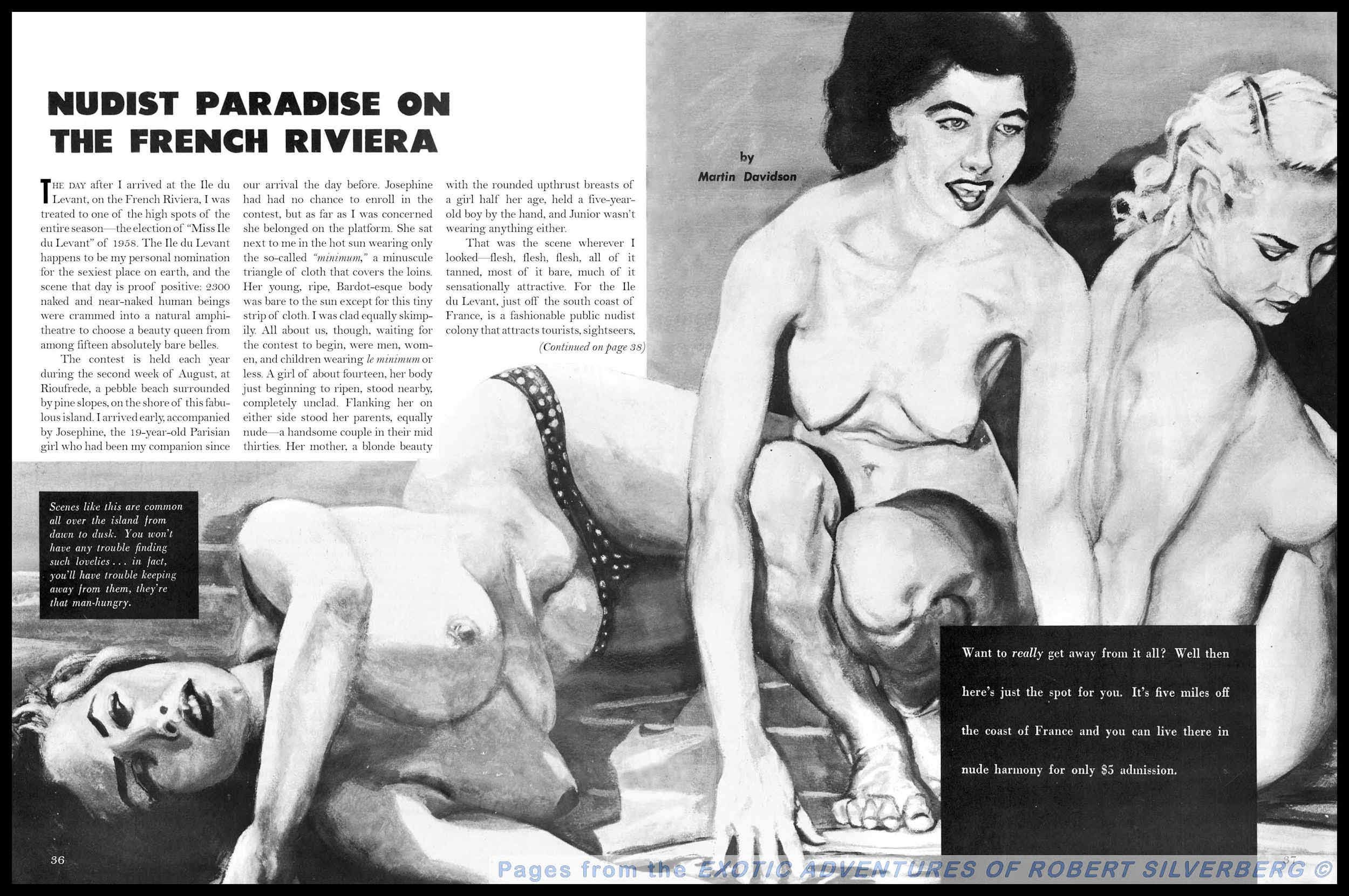 I think any fan of Robert Silverberg of men’s adventure mags will love either edition of EXOTIC ADVENTURES OF ROBERT SILVERBERG.

I know Bob likes the book. In an email he sent me after he got his copies, he said: “Beautiful job. What a hoot!”

You can get a copy for yourself via Amazon in any country worldwide, other major online booksellers, or directly from me at a discount via my eBay listings.