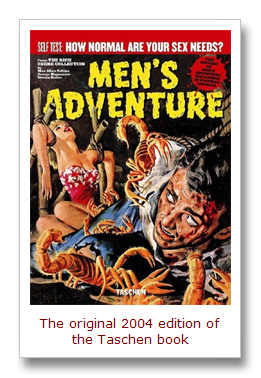 One of the must-have books for fans and collectors of men’s pulp mags is Men’s Adventure Magazines, published by Taschen.

It also shows some examples of what the original cover paintings and interior art looked like and has interesting background text written by the prolific novelist Max Allan Collins, the pulp and comic art expert George Hagenauer and the illustration art expert Steven Heller.

The images in this lushly illustrated book come from the Rich Oberg Collection — the world’s largest collection of men’s adventure magazines and the original artwork created for them.

The collection’s owner, Rich Oberg, is justly proud of the Taschen book, which was reprinted in 2008 as part of Taschen’s special 25th anniversary series. (If you’re a true fan of the genre, you’ll also want to seek out and buy a copy of the original 2004 edition of the book, with the scorpion menace cover, shown at left. It’s now out of print, but you can still find used copies on eBay or AbeBooks.com.)

The original edition is larger in size than new edition. It also has more cover art and more chapters, including a whole chapter about the Nazi torture and bondage subgenre that’s missing from the current edition, plus an interview with artist Norm Eastman, the master of evil Nazi cover art.

Amazingly, what’s shown in both the original and current editions of the Taschen book is only a small part of Rich Oberg’s collection. 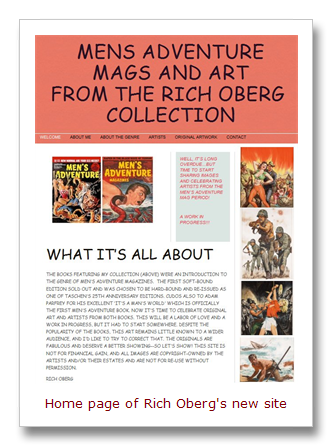 Last December, when I talked to Rich for an interview that I posted on this blog, he told me he was thinking about creating a “virtual museum” online to showcase more of the great original artwork that he owns.

Recently, Rich let me know that he’d put up the initial framework for that virtual museum on the website MensAdventure.com.

So, I called him at his home in Tennessee to talk with him about it.

He said it’s “a work in progress” that currently has just a taste of what he ultimately plans to show after he finishes digitizing his collection and works with a web designer to flesh out the site.

To me, what Rich has already posted there is very cool. It’s the first online glimpse into a unique collection of art that few people have ever seen.

In the “Original Artwork” section, you’ll find some examples of what is to come on Rich’s site — beautiful, high resolution scans of original cover paintings side-by-side with the covers they were used for.

Viewing the original artwork, without all the titles, headlines and photo insets used on the magazine covers, is extremely interesting.

It makes it easier to see just how dramatic and well-executed the cover paintings were.

Below are a few examples from Rich’s website, shown here with his permission, including: a great “snake menace” painting by Vic Prezio for Battle Cry; a classic Nazi bondage and torture painting by Norm Eastman for Man’s Epic; and, a gonzo teen gang cover done by Norman Saunders for New Man magazine. 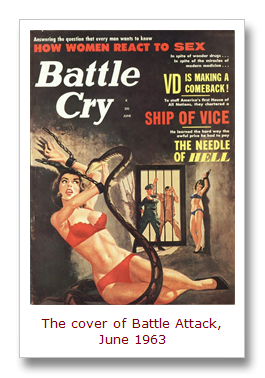 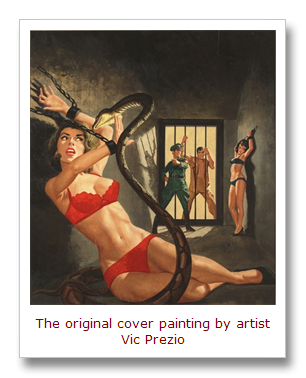 “Over time, I’ll add more and more images,” Rich told me. “I’ll also post comments and anecdotes about the artists. I’m pretty familiar with their work now and I’ve met many of the artists who are still alive or were living when I started my collection in the 1990s. I’d like their phenomenal art to be seen by more people and I want to pass on some of the knowledge I’ve gained about it. Most of this artwork is an embodiment of certain aspects of American popular culture from the 1950s through the mid-1970s. And, even though the subjects are often wild, the artwork represents a fascinating style of ‘realism.’” 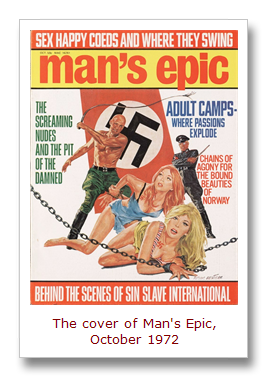 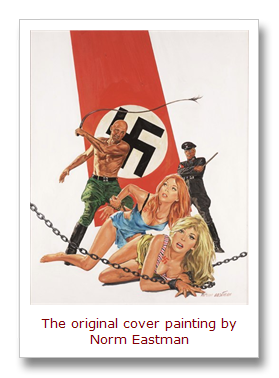 “It’s a style of pulp art that’s different from, though influenced by, the earlier pulp magazines published in the decades before World War Two,” Rich noted. “It extends into the cover art for paperback books and comics from the Fifties and Sixties. Indeed, many paperback and comic covers from that time period were done by the same illustrators who did the best covers and interior artwork for men’s adventure magazines — artists like James Bama, Gil Cohen, Charles Copeland, Mel Crair, Raphael DeSoto, Clarence Doore, Mort Kunstler, Bruce Minney, Earl Norem, Vic Prezio and Norman Saunders.”

“My collection includes hundreds of original cover and interior art paintings by all of those artists and many others. Most of the artwork they created for the men’s adventure magazines has never been shown in any books or online. And, as far as I know, I have more of it than anyone. So, I want to make it available on my website and increase public awareness and appreciation of these great artists and their work.” 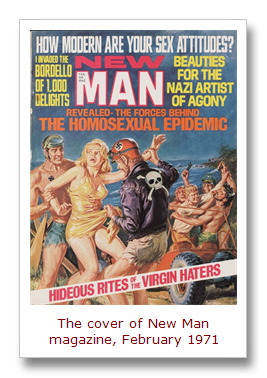 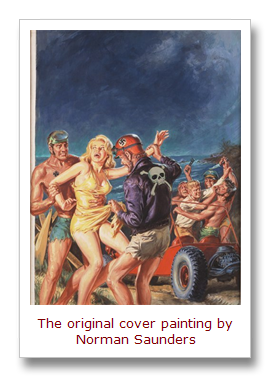 Rich added: “My special thanks to you and your terrific blog, Bob, for helping motivate me to share more of this fantastic imagery — and have some fun doing it.”

You’re very welcome, Rich, and thank you! It’s going to be great fun for me and other men’s pulp mag fans to see more of your incredible collection as you post it on your new website.