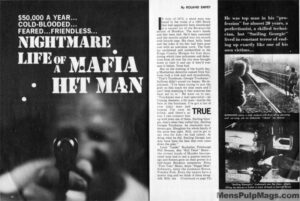 For me, reading old men’s pulp mags is a like visual, literary and sociological treasure hunt.

If you’re interested in things like vintage pulp fiction and pulp illustration art, and mid-20th Century pop culture, sexual politics and history, you can find cultural gems in almost every vintage men’s adventure magazine published in the 1950s, 1960s and 1970s.

And, there are actually several more notable “treasures” in that issue.

One is an article about a Mafia hit man written by Walter Kaylin, under his favorite pen name Roland Empey.

Walter is one of the grand masters of men’s adventure magazine stories. (And, I’m happy to say, he’s still alive and living in Old Lyme, Connecticut.) 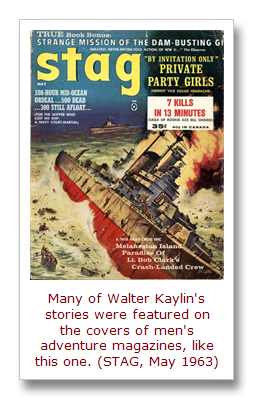 Some were pure action/adventure yarns. Some were fact-based historical pieces (like his story about the ill-fated USS Indianapolis, the American Navy cruiser mentioned in the movie JAWS).

Many were masterful examples of the faux “true” stories that were a hallmark of the men’s adventure magazine genre.

Walter was a special favorite of the editors the Magazine Management men’s mags, such as FOR MEN ONLY, MALE, MAN’S WORLD, MEN and STAG.

The critically-acclaimed author, playwright and screenwriter Bruce Jay Friedman, who once edited several of those periodicals, named Kaylin one of his favorite writers in his memoir EVEN THE RHINOS WERE NYMPHOS. (By the way, I highly recommend that book and Friedman’s recently-published second memoir, LUCKY BRUCE. Both include some fascinating and funny anecdotes about Mag Management’s heydays.)

Mario Puzo also worked as an associate editor and writer at Magazine Management, before his breakthrough novel THE GODFATHER made him famous.

“He [Kaylin] was great!…He was outrageous, he just carried it off. He’d have this one guy killing a thousand other guys. Then they beat him into the ground, you think he’s dead, but he rises up again and kills another thousand guys.” 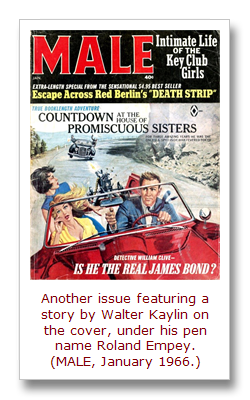 (That interview with Puzo, a rare men’s adventure story by Bruce Jay Friedman and a chapter from his RHINOS book, and two classic men’s adventure stories by Walter Kaylin will be included in WEASELS RIPPED MY FLESH – the forthcoming anthology I’m editing with Josh Alan and author/publisher Wyatt Doyle at New Texture publishing.)

Kaylin and Puzo both wrote many stories about the Mafia for Mag Management magazines.

Kaylin’s story in the May 1973 issue of MALE is titled “NIGHTMARE LIFE OF A MAFIA HIT MAN.” 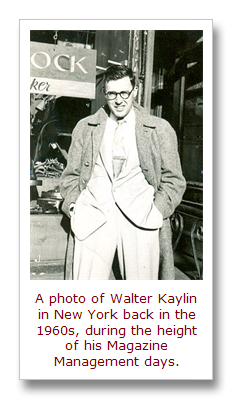 However, one of the special talents Walter Kaylin had was to do enough research and add enough facts to make such stories seem real and believable, while simultaneously writing them in a gritty, attention-grabbing pulp fiction style.

For example, here are the opening lines of his “HIT MAN” story:

“In July of 1972, a dead man was found in the trunk of a 1963 Buick that had apparently been abandoned in a vacant lot of the Brownsville section of Brooklyn. The man’s hands and feet were tied. He’d been castrated and the results sealed into his mouth with bicycle tape. His chest, belly, head and the soles of his feet had been gone over with an acetylene torch…”

As a special treat for readers of this blog, I’m making a PDF copy of “NIGHTMARE LIFE OF A MAFIA HIT MAN” available as a free download. (Click this link to download it from my Payloadz store.)

Another story in the May 1973 issue of MALE that caught my eye is “SEX AND THE COUNTRY GIRL” by Keith Josephs (probably a pseudonym, though I don’t know who for).

Remember all those old, politically-incorrect, sexist, generally dumb jokes about “the farmer’s daughter”? Well, this article purports to reveal how “The Truth Is Wilder Than The Jokes.”

There are some other dumb but fun gems in the May 1973 issue of MALE, like the sexposé story “HOW WE PLAY THOSE NEW SENSUOUS BEDROOM GAMES.” It explains how “Swinging, swapping and group sex are ‘kid stuff’” to the latest breed of hip “sexual superstars.” 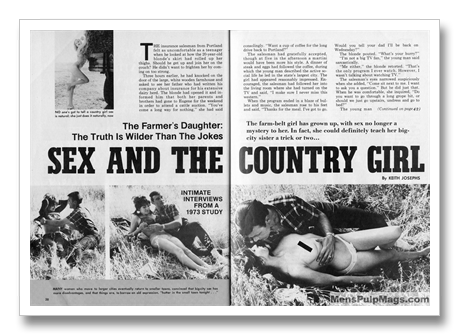 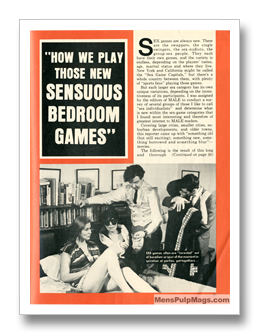 I also enjoyed reading the monthly “INSIDE FOR MEN” news roundup, which includes all kinds of intriguing little news bytes.

My favorite is kind of a mini-version of one of those “love slave” fantasy stories that are common in men’s adventure magazines. It says:

“MAN-HUNGRY GALS CAN GET PRETTY DESPERATE, AS THREE ESCAPED FEMALE CONS DEMONSTRATED BY MAKING A ‘LOVE CAPTIVE’ OF 74-YEAR-OLD JOHN TENSOR, OF ATLANTA. SAID TENSOR LATER: ‘IF IT HAD HAPPENED WHEN I WAS 70, I’D HAVE MADE THEM ALL HAPPY.’” 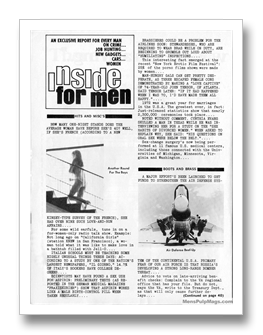 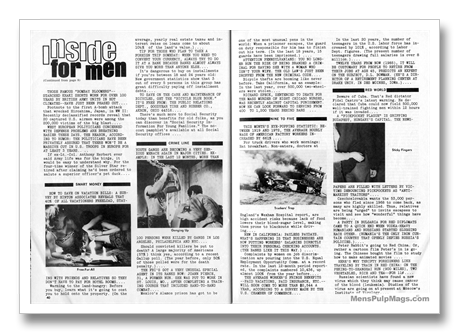 Although many of the cartoons in vintage men’s adventure magazines are groaners, there’s one in the May 1973 issue of MALE that made me laugh. It’s by Al Kaufman, a talented cartoonist whose work appeared in many top magazines, including THE SATURDAY EVENING POST, COLLIER’S, THE LADIES HOME JOURNAL, THIS WEEK, KING FEATURES SYNDICATE, THE NEW YORK TIMES, THE CHRISTIAN SCIENCE MONITOR, LOOK, and AMERICAN LEGION MAGAZINE.

Kaufman’s cartoon in MALE was a bit too racy for those mainstream publications. It shows a knight in armor talking to a damsel who’s being menaced by a fire-breathing dragon.

The knight tells the distressed damsel: “That’s the deal. If you want me to slay that goddam dragon, you’ll have to put out.”

I also got a couple of chuckles from the 2-page spread of cartoons in this issue by an artist who went by the single name Slim. I admit most of them are in the groaner category. But I’m easily amused. 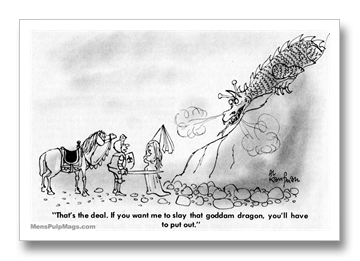 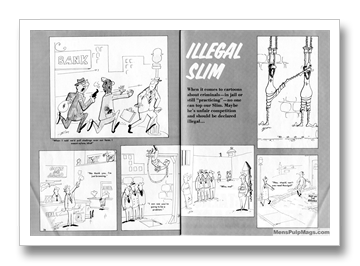 In the next post here I’ll feature cover scans of some of the recent additions to my magazine collection.

If you want a preview, check out my recent posts in the Men’s Adventure Magazines Facebook Group, where a lot of interesting people who like vintage pulp art and pulp fiction hang out.

Click this link or the image above for more information about the
forthcoming men’s adventure anthology WEASELS RIPPED MY FLESH.