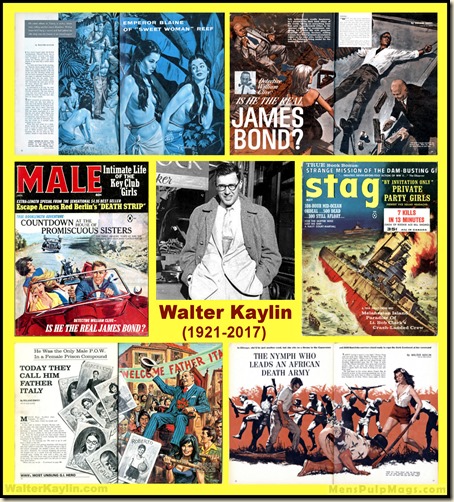 In the days since then, I’ve been thinking about him a lot and rereading some of my favorite Walter Kaylin stories.

My publishing partner Wyatt Doyle and I included two Kaylin stories in the first book in our “Men’s Adventure Library” series, WEASELS RIPPED MY FLESH!

When Wyatt and I started discussing a follow-up to WEASELS, we both agreed we wanted to do an anthology fully dedicated to stories written by Walter Kaylin.

That idea became the second book in our series, HE-MEN, BAG MEN & NYMPHOS.

Rereading Walter’s stories reminded me again why is considered one of the best and most imaginative writers in the realm of men’s pulp adventure by people who know his work.

In WEASELS, we reprinted a reminiscence that novelist, playwright and screenwriter Bruce Jay Friedman wrote about his pre-fame years in the mid-1950s and early 1960s; the years when he worked as an editor for the classic men’s adventure magazines published by Martin Goodman’s Magazine Management company (ACTION FOR MEN, FOR MEN ONLY, MALE, MEN, MAN’S WORLD, STAG, TRUE ACTION, etc.).

Bruce’s article about his time at Magazine Management is a seminal piece of men’s adventure magazine history, titled “Even the Rhinos Were Nymphos.”

It initially appeared in the October 9, 1975 issue of ROLLING STONE magazine.

It was later used in Bruce’s autobiographical book EVEN THE RHINOS WERE NYMPHOS, published in 2001.

It was then reprinted in the first book to provide an illustrated history of the men’s adventure magazine genre, IT’S A MAN’S WORLD. (The second is MEN’S ADVENTURE MAGAZINES IN POSTWAR AMERICA, first published in 2004.)

With Bruce’s permission, we included his “Rhinos” article in WEASELS RIPPED MY FLESH!, the first modern anthology of classic men’s adventure magazine stories.

In that piece, Bruce raved about stories written by the man he called “the great Walter Kaylin.”

Walter was one of the talented band of literary “Mad Men” Bruce hired to be Associate Editors and regular writers for those magazines during his tenure at Magazine Management, from 1955 to 1966.

Another was Mario Puzo, who went on to world-wide success as author of THE GODFATHER. (Side note: a beautifully-illustrated “Book Bonus” version of THE GODFATHER was published in the August 1969 issue of the Mag Management magazine MALE.) 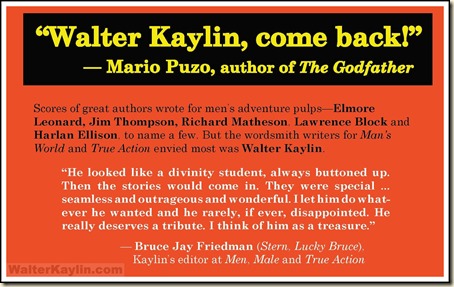 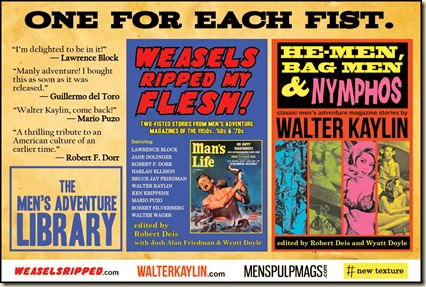 In an interview Bruce’s son writer/musician Josh Alan Friedman did with Puzo in 1984 (also reprinted in our WEASELS anthology), Puzo expressed his own admiration for Kaylin.

“He was great!,” Puzo told Josh. “He was outrageous, he just carried it off. He’d have this one guy killing a thousand other guys. Then they beat him into the ground, you think he’s dead, but he rises up again and kills another thousand guys.” 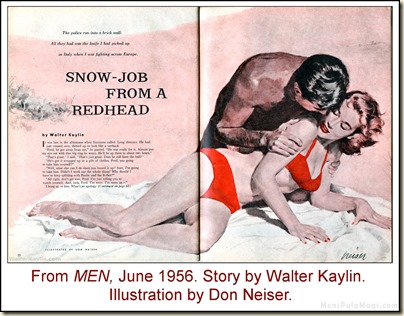 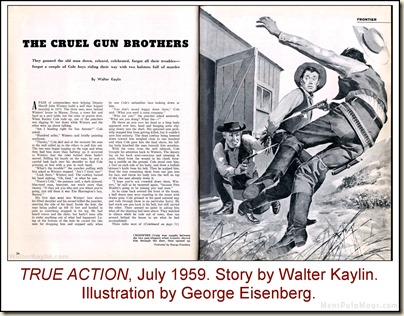 Another Mag Management staffer Josh interviewed was Mel Shestack. Shestack went on to, among other things, a prestigious position as editor of the SATURDAY EVENING POST.

In the interview, Shestack told Josh something he’d said to writer Hannah Arendt about Kaylin. (Arendt is the renowned philosopher and political writer best known for her coverage of the war crimes trial of Nazi Adolf Eichmann, in which she coined the phrase “the banality of evil.”)

“The very first day at the POST,” Shestack recalled, “I edited a piece by John O’Hara and Hannah Arendt. She said, ‘Come on, vat are you doink?’ “I said, ‘You’re okay Arendt, but you’re no Walter Kaylin.’”

About eight years ago, as I got increasingly serious about collecting and writing about men’s adventure magazines, I contacted both Bruce Jay Friedman and Josh Alan to see if they knew how to get in touch with Walter Kaylin.

They didn’t. They weren’t sure Walter was still alive. 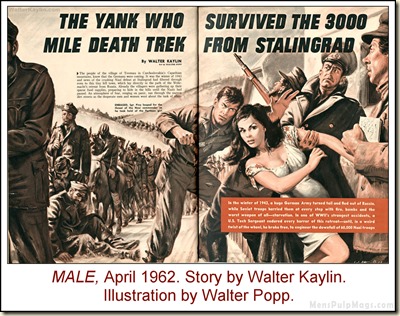 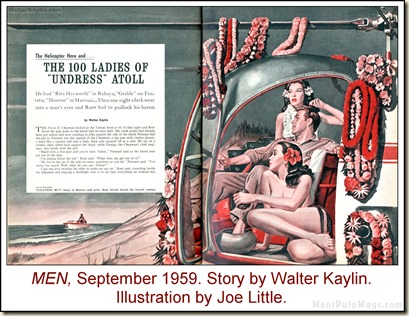 But Josh had contact info for Walter’s daughter Lucy Kaylin. They were both involved in the current magazine world, Josh as a writer of articles for various magazines and Lucy as an editor of high end women’s magazines. (She’s currently Editor in Chief of O, THE OPRAH MAGAZINE).

Thanks to Josh, I got in touch with Lucy. She told me Walter was indeed still alive and gave me his phone number. I was so excited I think I called him that same day.

When I first talked with Walter, he was 89 years old and living with his beloved wife Peggy in Old Lyme, Connecticut. 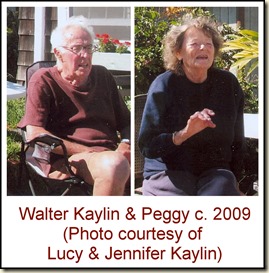 He was very warm and friendly toward me from the start. I barraged him with all kinds of questions about his time as a writer for Magazine Management, which spanned two decades, from the mid-1950s to the mid-1970s. He graciously answered them as best he could, given how hard it is for anyone to recall details from 40 to 60 years in the past.

“It surprises me because it’s so long ago,” he told me in the first in-depth phone interview I did with him. “I used to write them pretty fast. Not as fast as someone like Mario [Puzo]. Mario was a speed demon. But I would write at a good pace and I was having a good time. I was very fond back then and continue to be fond of adventure stories.”

During the course of several conversations, I made a deal with Walter to buy the rights to reprint two of his stories in the WEASELS anthology and a special collection of his men’s adventure magazine stories that became HE-MEN, BAG MEN & NYMPHOS.

In addition to collecting 15 great stories by Walter, the HE-MEN includes an introduction by Walter’s daughters Lucy and Jennifer, transcriptions of my phone interviews with Walter and an exclusive interview about Walter with Bruce Jay Friedman.

Like Robert F. Dorr, whose work we featured in the anthology A HANDFUL OF HELL, Walter wrote hundreds of stories for the Magazine Management men’s adventure mags.

Like Dorr, his stories appeared in all of the top Magazine Management mags and he wrote almost every type of story they featured.

He was a grandmaster of violent exotic adventure and war fiction; stories like “THE NYMPH WHO LEADS AN AFRICAN DEATH ARMY” (MEN, October 1960), “THE YANK WHO SURVIVED THE 300-MILE DEATH TREK FROM STALINGRAD” (MALE, April 1962), “THE BLACK LACE BLONDE, THE YANK JUNGLE FIGHTER AND THE CHICOM PLOT TO GRAB THE MID-PACIFIC” (MEN, July 1966) and “SURF PACK ASSASSINS” (MALE, August 1967). 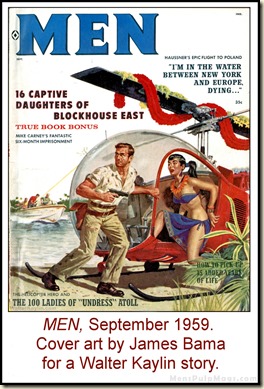 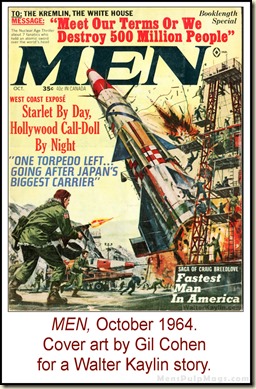 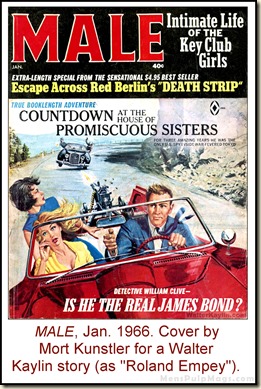 Walter was also a master at stories that sounded – and were portrayed as – true, but which were total creations of his fertile mind, such as “DETECTIVE WILLIAM CLIVE: IS HE THE REAL JAMES BOND?” (MALE, January 1966), “MY BLOODY LIFE AS A MAFIA BAG MAN” (FOR MEN ONLY, August 1974) and “THE STEWARDESS ‘CALL GIRL SLAVE’ RING” (FOR MEN ONLY, December 1971).

Walter told me loved reading newspapers and doing historical research. That’s reflected in the fact that he also wrote many fact-based stories about current issues, like “THE ARMY’S TERRIFYING DEATH BUGS AND LOONY GAS” (MEN, November 1960) and stories based on historical events, like “108-HOUR MID-OCEAN ORDEAL…500 DEAD…300 STILL AFLOAT” (STAG, May 1963.)

The “MID-OCEAN ORDEAL” story is about the USS Indianapolis. If you’re a fan of the movie JAWS, or the Discovery Channel’s “Shark Week” specials, you probably know that ill-fated ship’s name.

It was an American Navy cruiser sunk by a Japanese sub’s torpedoes in 1945, after delivering parts for the atomic bomb dropped on Hiroshima.

During a well-known scene in JAWS, Quint the shark hunter, played by Robert Shaw, reveals that he was a crew member on the Indianapolis. He gives a grim, terse account of what happened to the crew after the ship sank. 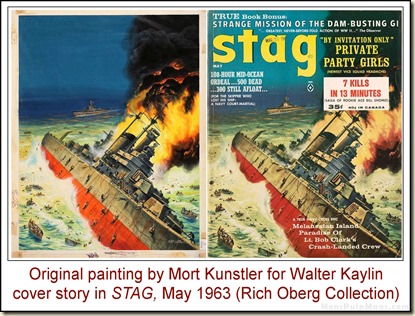 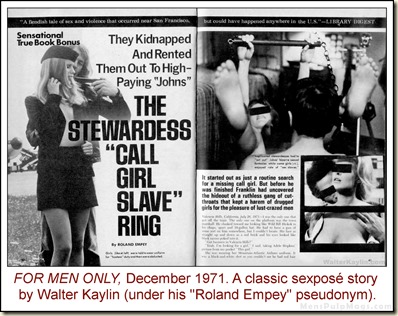 Amazingly, Walter Kaylin could even write humorous pieces, like “THEY CALL HIM FATHER ITALY” (FOR MEN ONLY, March 1975) and science fiction, like “MEET OUR TERMS OR WE DESTROY 500 MILLION PEOPLE” (MEN, October 1964).

Most of Walter’s stories were published under his own name.

More than a hundred were credited to a pseudonym Bruce Jay Friedman gave him: Roland Empey.

Some of the men’s adventure stories Walter wrote were credited to a third pen name, David Mars, which was typically used for his news-style stories and exposés, like “THE DEATH BUGS” piece. 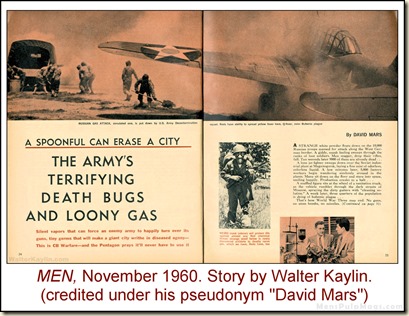 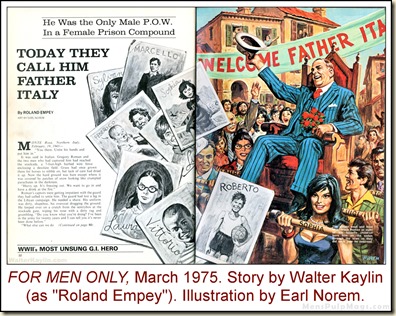 Walter needed the pseudonyms because he was so prolific — and so good — that it was common for two of his stories to appear in the same issue of a men’s adventure magazine, credited under two different names.

For example, our HE-MEN, BAG MEN & NYMPHOS anthology includes a story that Bruce Jay Friedman’s said was his favorite yarn by Walter: “EMPEROR BLAINE OF ‘SWEET WOMAN’ REEF” from the September 1959 of MALE. 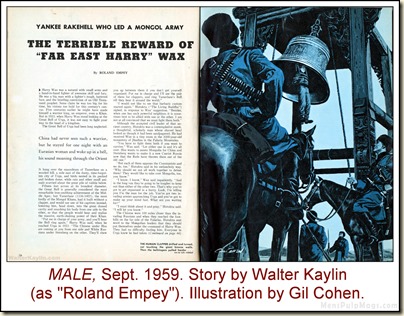 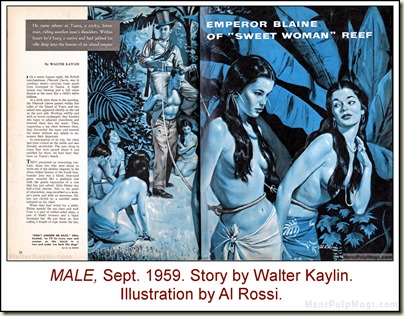 HE-MEN also includes another Kaylin story from MALE, September 1959 credited under his pen name Roland Empey: “THE TERRIBLE REWARD OF ‘FAR EAST HARRY’ WAX” – as well as a third Kaylin story that appeared that same month in the September 1959 issue of MEN, “THE HELICOPTER HERO AND THE 100 LADIES OF ‘UNDRESS’ ATOLL”.

Like Mario Puzo, Walter also served as an Associate Editor at Magazine Management for a while. In that capacity he helped brainstorm story ideas and titles, edited other writers’ stories, wrote cover headlines, teaser subheads and captions for artwork and photos, and proofread galley copies of the magazines. In the fall of 1957, he was drafted to be the chief editor of a little-known, short-lived, digest-size men’s adventure magazine titled BRAVE. (Walter didn’t recall BRAVE until I reminded him of it and described it to him.) 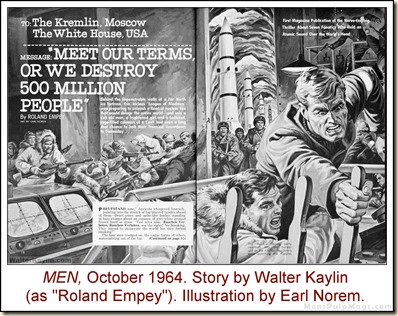 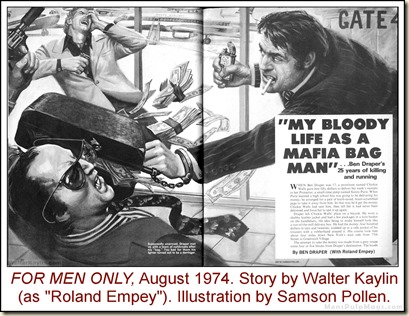 Looking back through all of these great stories helped cheer me up after the news of Walter’s death.

So did rereading the article about Walter that was printed in his local newspaper, the NEW HAVEN REGISTER, when the book was published. In that story, when the reporter asked him how it felt to be rediscovered, he said: “I was immensely pleased…It means a lot to me.”

It also helped that when Lucy Kaylin called to let me know Walter had passed she also told how pleased and proud Walter was by our publication of the HE-MEN, BAG MEN & NYMPHOS anthology. She said it was one of the best things that happened to him in his final years.

That was great to hear, since knowing Walter and having the opportunity to reprint some of his classic stories is one of the best things that has happened to me as a men’s adventure magazine collector and publisher. 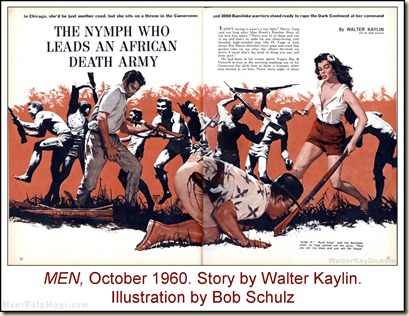 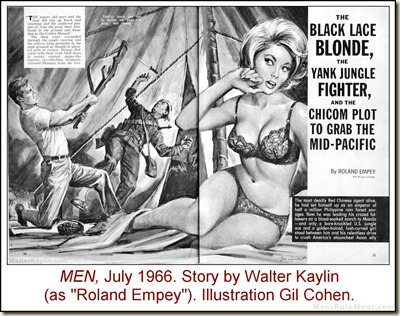 All of the scans shown in this post are Walter Kaylin stories from our HE-MEN anthology or the WEASELS book.

With the permission of Lucy and Jennifer Kaylin, there will be more Walter Kaylin stories in future books in our Men’s Adventure Library series.

I’m even thinking about reprinting my favorite of the two novels Walter wrote: ANOTHER TIME, ANOTHER WOMAN, published in 1963. It’s a wild tale involving a jazz musician, a femme fatale, a murder and a strange religious cult. (Walter’s other novel, THE POWER FORWARD, published in 1979, is about a black basketball player.)

You were one of the greats. 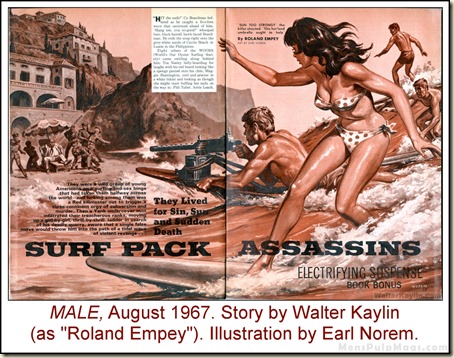 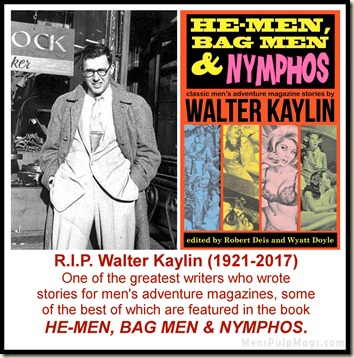