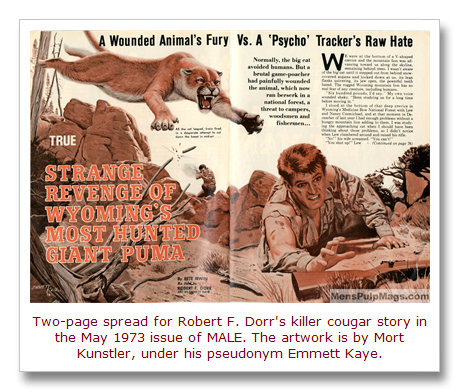 Last year, I had the honor of working with Bob on A HANDFUL OF HELL, a collection of war and adventure stories he wrote for the men’s pulp mag genre. I first got to know Bob Dorr in 2009. In the years since then, I’ve written many posts on this blog about him, his stories and his books. I’ll be doing more. In the meantime, Bob’s passing led me to look back through my old posts with fondness. The post below was originally uploaded in April 2012.

By 1973, the genre of male-oriented periodicals called men’s adventure magazines was starting to fade away.

Most of those that remained had stopped using action/adventure paintings on their covers and switched to photos of semi-nude models.

For example, the cover of the May 1973 issue of MALE magazine featured a photo of an unnamed topless model laying in the grass.

The rest of the cover is taken up by a jumble of headlines.

Most of those fall short of the gonzo creativity of cover headlines used on men’s adventure magazines in the 1950s and 1960s. 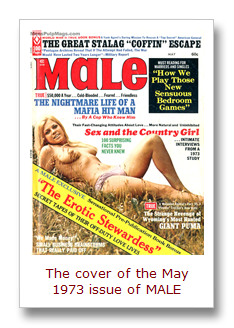 But inside this issue there are some true pulp fiction, pulp art and pop culture treasures.

Among them are two stories by Robert F. Dorr, one of the best and most prolific of the authors whose work appeared regularly in men’s adventure magazines.

I am a huge fan of Bob’s past and present work. I’ve done several previous posts about his stories and books on this blog and in the Men’s Adventure Facebook Group.

After the men’s pulp mag genre disappeared in the late 1970s, Bob went on to become one of our country’s top military aviation historians.

He has written more 70 books, most recently two critically-acclaimed World War II history books about American pilots and their crews: HELL HAWKS and MISSION TO BERLIN.

His latest book – MISSION TO TOKYO: THE AMERICAN AIRMEN WHO TOOK THE WAR TO THE HEART OF JAPAN – is now available on Amazon.com.)

From the late 1950s to the mid-1970s, before Bob specialized as a history writer, he penned hundreds of stories for men’s adventure magazines.

Two of my favorite Robert F. Dorr stories are included in our WEASELS RIPPED MY FLESH! anthology.

Eventually, I hope to publish an anthology made up entirely of Bob Dorr stories. 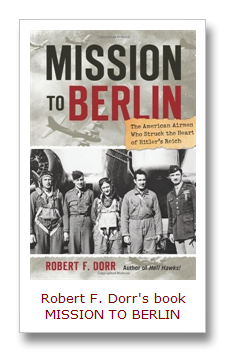 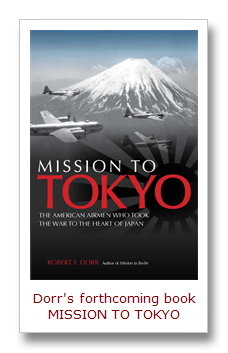 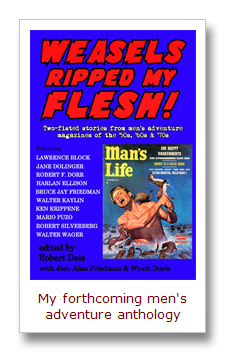 Two potential options for that anthology are in the May 1973 issue of MALE.

One is an “as told to” outdoor adventure saga about a huge man-killing cougar. The title is “STRANGE REVENGE OF WYOMING’S MOST HUNTED GIANT PUMA.” The subhead at the top of the first two pages hints at the plot: “A Wounded Animal’s Fury Vs. A ‘Psycho’ Tracker’s Raw Hate.”

As that suggests, this one is different than the typical killer creature stories that were common in men’s adventure magazines. In this story, Bob Dorr shows empathy for the animal and portrays a human as the real villain.

The story’s rip-snorting duotone illustration was done by Mort Kunstler, though it’s credited under his favorite pseudonym Emmett Kaye. Kunstler was one of top illustration artists who did cover and interior illustrations for men’s adventure magazines from the mid-1950s to the mid-1970s. He went on to become one of America’s most renowned painters of historical art. 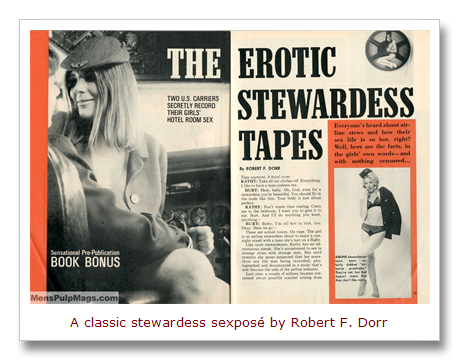 It’s portrayed as a true story. And, on the first page it’s promoted as a “Sensational Pre-Publication BOOK BONUS.”

Both claims may have been believable at the time.

In the late ’60s and early ’70s, the huge success of the best seller COFFEE, TEA OR ME? inspired a slew of sexy stewardess stories and books. Authorship of that semi-titillating, purportedly-true memoir was originally credited to two airline stewardesses named Rachel Jones and Trudy Baker.

When the book was published in 1967, two young women using those names went on a heavily-covered media tour to promote it.

The book became an international sensation, embedded a catchphrase into the English language, and was made into a TV movie in 1973 starring Karen Valentine and Louise Lasser.

Years later, it was revealed that the book was a hoax that had actually been written by the veteran paperback ghostwriter Donald Bain. 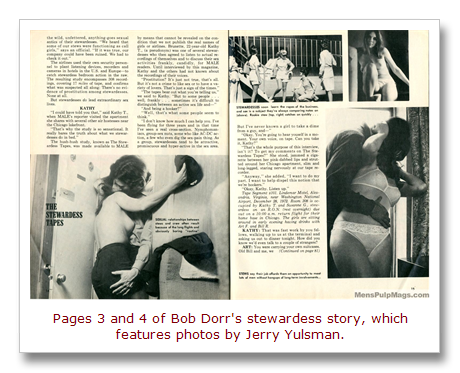 I wish it did. Dorr’s story is actually racier and more fun to read than COFFEE, TEA OR ME? In fact, it’s a real hoot, starting with its opening paragraphs:

KATHY: Take all my clothes off. Everything. I like to have a man undress me.

BURT: Here, baby. Oh, God, even for a stewardess you’re beautiful. You should fly in the nude like this. Your body is just about perfect.

KATHY: Don’t waste time staring. Carry me to the bedroom. I want you to give it to me, Burt. And I’ll do anything you want, anything—

These are actual voices. On tape. The girl is an airline stewardess about to enjoy a one-night stand with a man she’s met on a flight.

Like most stewardesses, Kathy has an ad­venturous streak. She’s accustomed to sex in strange cities with strange men. But until recently she never suspected that her mara­thon sex life was being recorded, pho­tographed and documented in a study that’s now become the talk of the airline industry.

The photo credits for the story say the shots of the sexy stews were taken by “Yulsman.” That refers to an interesting and talented photographer and author named Jerry Yulsman.

Yulsman’s most familiar photos are probably those he took of Beat writer Jack Kerouac and comedian and social activist Dick Gregory.

One of his shots of Kerouac outside the legendary Kettle of Fish Bar in Greenwich Village was featured on the cover of the 1983 edition of the book MINOR CHARACTERS: A BEAT MEMOIR, written by Joyce Johnson. Johnson was Kerouac’s lover in the late 1950s. That’s her in the neon glow behind Kerouac in the photo.

More recently, a similar Yulsman photo of Kerouac was used for a Gap clothing ad. 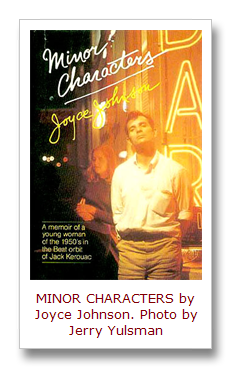 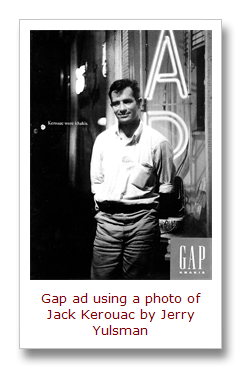 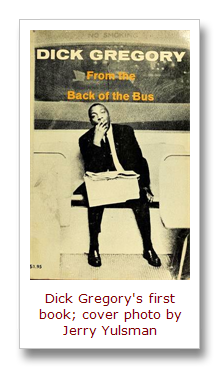 In the Fifties, Sixties and Seventies, Yulsman sold celebrity and news-related photos to mainstream magazines, such as LOOK and COLLIER’S. He also sold glamour pinup shots of models, as well as staged photos like those used in Robert F. Dorr’s stewardess story, to many of the top men’s girlie and adventure magazines, ranging from PLAYBOY to MALE.

Along the way, he wrote several books. One is a classic how-to guide for would-be glamour photographers.

Coming up in my next post, more lost men’s pulp mag treasures from the May 1973 issue of MALE, including some rousing adventure and “good girl artwork” by Charles Copeland, Bruce Minney and Samson Pollen, and a Mafia story by the great Walter Kaylin (under his pen name Roland Empey).