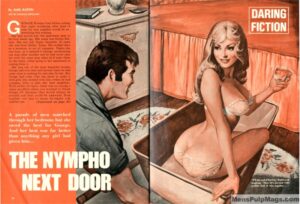 There are cool, interesting or entertainingly wacky things in almost every men’s adventure magazine published in the 1950s, 1960s and 1970s.

As mentioned in my last post, the May 1973 issue of MALE magazine includes classic stories by pulp-writer-turned-historian Robert F. Dorr, artwork by the great Mort Kunstler and photos by Jack Kerouac’s friend Jerry Yulsman.

That issue also includes some other pop culture treasures.

One is a lush, orange-tinted “Good Girl Art” duotone by Charles Copeland, one of the masters of sexy GGA illustrations and paperback covers. (See Lynn Munroe’s excellent posts about Copeland for more info about him.)

Copeland’s illo goes with a story titled “THE NYMPHO NEXT DOOR.” That piece of “Daring Fiction” was written by the now largely-forgotten, but very prolific writer Alex Austin.

Austin penned hundreds of stories for men’s pulp and mystery magazines from the early 1950s to the mid-1970s. A high percentage appeared in the classic Atlas/Diamond men’s adventure periodicals published by Magazine Management, such as FOR MEN ONLY, MALE, MAN’S WORLD, MEN and STAG. 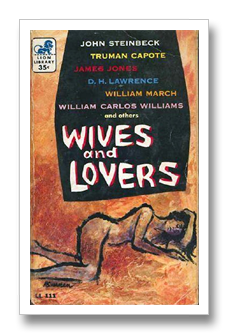 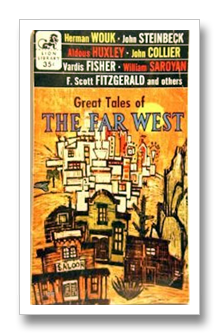 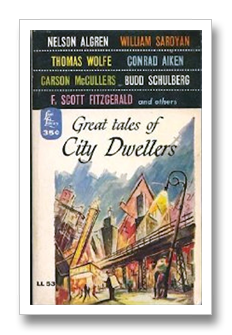 One Lion Library book edited by Austin — WOMEN WITHOUT MEN (1956) — features a cover painting by Stanley Borack, an artist who created many superb cover and interior illustrations for men’s adventure magazines. A few years ago, Borack’s original painting for WOMEN WITHOUT MEN was sold on the Heritage Auctions site.

Like Austin’s other Lion Library anthologies, WOMEN WITHOUT MEN includes short stories by a number of famous authors, including D. H. Lawrence, John Steinbeck, Conrad Aiken, James Joyce, Robert Lowry and Nelson Algren. But the blurb on the back cover shows that it wasn’t aimed at a highbrow audience: “…their nights are strange ones — sometimes lonely, often wild, and always crowded with the longing ache which drives them like unleashed animals into the jungles of darkest desire…”

In addition to editing anthologies, Austin wrote several novels. One was a book adaptation of the 1968 comic caper flick SALT AND PEPPER, which starred Sammy Davis Jr. and Peter Lawford. 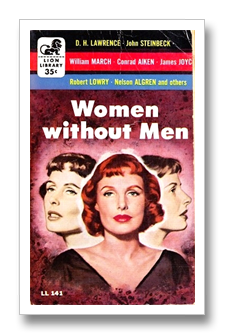 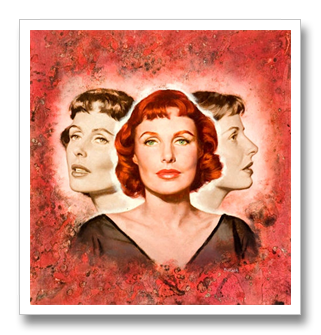 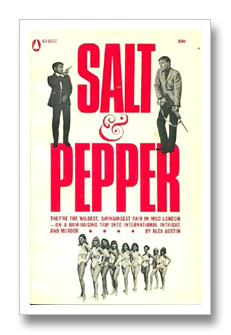 Other Austin novels include THE BRIDE (1964), a racy bestseller, and THE BLUE GUITAR (1965), an even racier tale about “a sensual love affair between a sister and her blind brother.” (As trashy as that may sound, THE BLUE GUITAR was actually treated seriously and called “near-poetic” in a review published in the SATURDAY REVIEW.)

Austin’s story in the May 1973 issue of MALE, “THE NYMPHO NEXT DOOR,” is a reflection of the love affair editors of men’s pulp magazines had with the words nympho and nymph, the common shorthand terms for nymphomaniac. They inserted those words as often as possible in story titles and cover headlines. 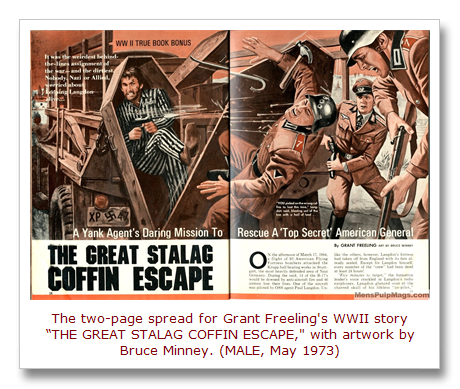 Some regular readers might even have believed that sex-hungry nymphos were everywhere.

But I assume that, for most of them, “nympho stories” were just fanciful entertainment and wishful thinking.

Of course, back then, many benighted men considered any woman who might actually enjoy having sex with a man to be a nympho.

This issue of MALE also has outstanding action/adventure duotones by two other great illustration artists.

One is a wild World War II scene by Bruce Minney (who I interviewed for this blog a while back).

That illo is for the story “THE GREAT STALAG COFFIN ESCAPE.”

It was written by Grant Freeling, another frequent contributor to men’s adventure mags, and is promoted as a “TRUE BOOK BONUS.”

It isn’t actually true in the sense of being, er, true per se. 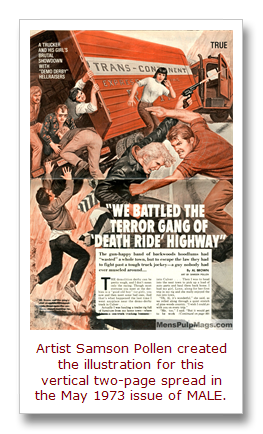 But did MALE’s reader really care about that? Nah. No more than fans of the REAL HOUSEWIVES shows on TV really care if the spats (or boobs) they’re seeing are real.

Another terrific action/adventure duotone in this issue is by the artist Samson Pollen.

Like Kunstler, Copeland, Borack and Minney, Pollen created hundreds of illustrations for men’s adventure magazines and paperback book covers from the late 1950s to the mid-1970s.

Pollen’s illustration in the May 1973 issue of MALE was printed vertically across two pages, as some spreads were in men’s pulp mags. You have to flip it around to see it the right way up, like a centerfold spread.

The story it’s for, “WE BATTLED THE TERROR GANG OF ‘DEATH RIDE’ HIGHWAY,” is an actioner about a tough trucker and his girlfriend.

It’s credited to Al Brown, a writer I could find nothing about. (The name may be a pseudonym, which was common for men’s pulp mag stories.)

From a visual standpoint, some of the other pop culture gems that caught me eye in this issue of MALE were men’s clothing ads.

One is for ELEGANZA.

According to the full-page ad for that line of menswear “Things happen when you wear ELEGANZA!”

What kind of things?

Well, as I recall, if you’d have worn clothes like that in certain neighborhoods in 1973 you might have gotten the crap kicked out of you, either for looking too gay or for looking like you were trying to invade some other pimp’s territory.

But I think readers of MALE were supposed to think the “things” that would happen were that they’d look really cool and become an irresistible magnet for nymphos like the ones they read about in men’s pulp mags. 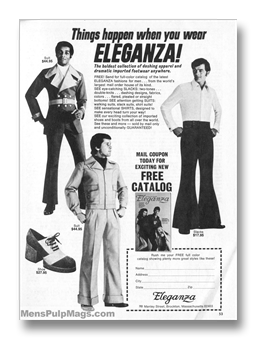 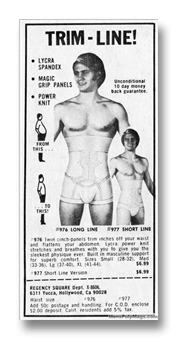 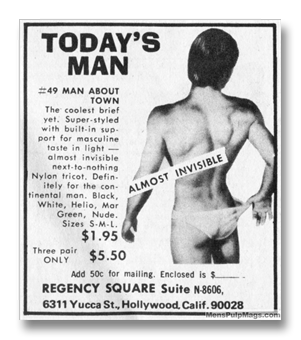 If you worried that your beer belly might show under your ELEGANZA duds, you could wear the TRIM-LINE precursor to Spanks.

It offered a way to “trim inches off your waist” using “Lycra power knit,” a modern marvel that would give you “the sleekest physique ever.” At no extra cost, you also got “built in masculine support.”

Underneath it all, you could be wearing your TODAY’S MAN briefs made from “almost invisible next-to-nothing Nylon tricot.” The ad says they were “Definitely for the continental man.”

Hmmm. Looking at the TODAY’S MAN ad makes me wonder if “continental man” was some kind of code language. Nevermind, I don’t want to know. MALE is a magazine for manly men, damnit!

So, in the next post, I’ll focus on some of the articles in the 1973 issue that provide manly advice for men.

In the meantime, if you really want to be cool and manly, buy some of the t-shirts, posters, coffee mugs and other unique products in the Men’s Pulp Mags CafePress store. Things will happen when you do! (One is that your purchase will help keep this blog alive.) 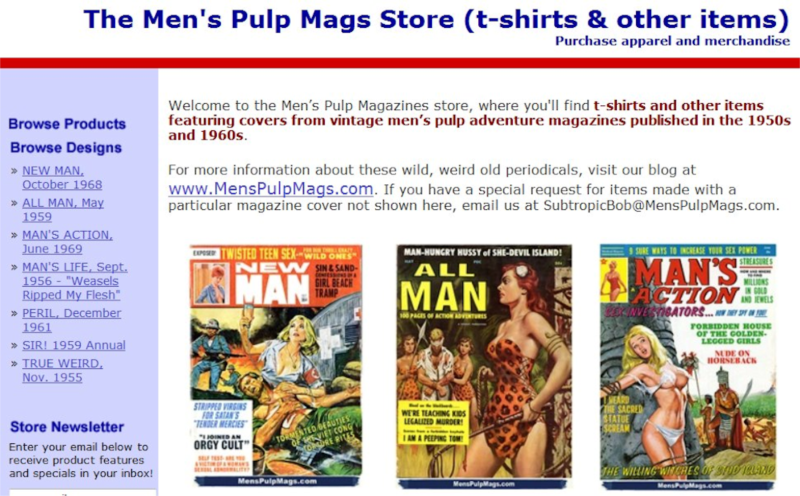