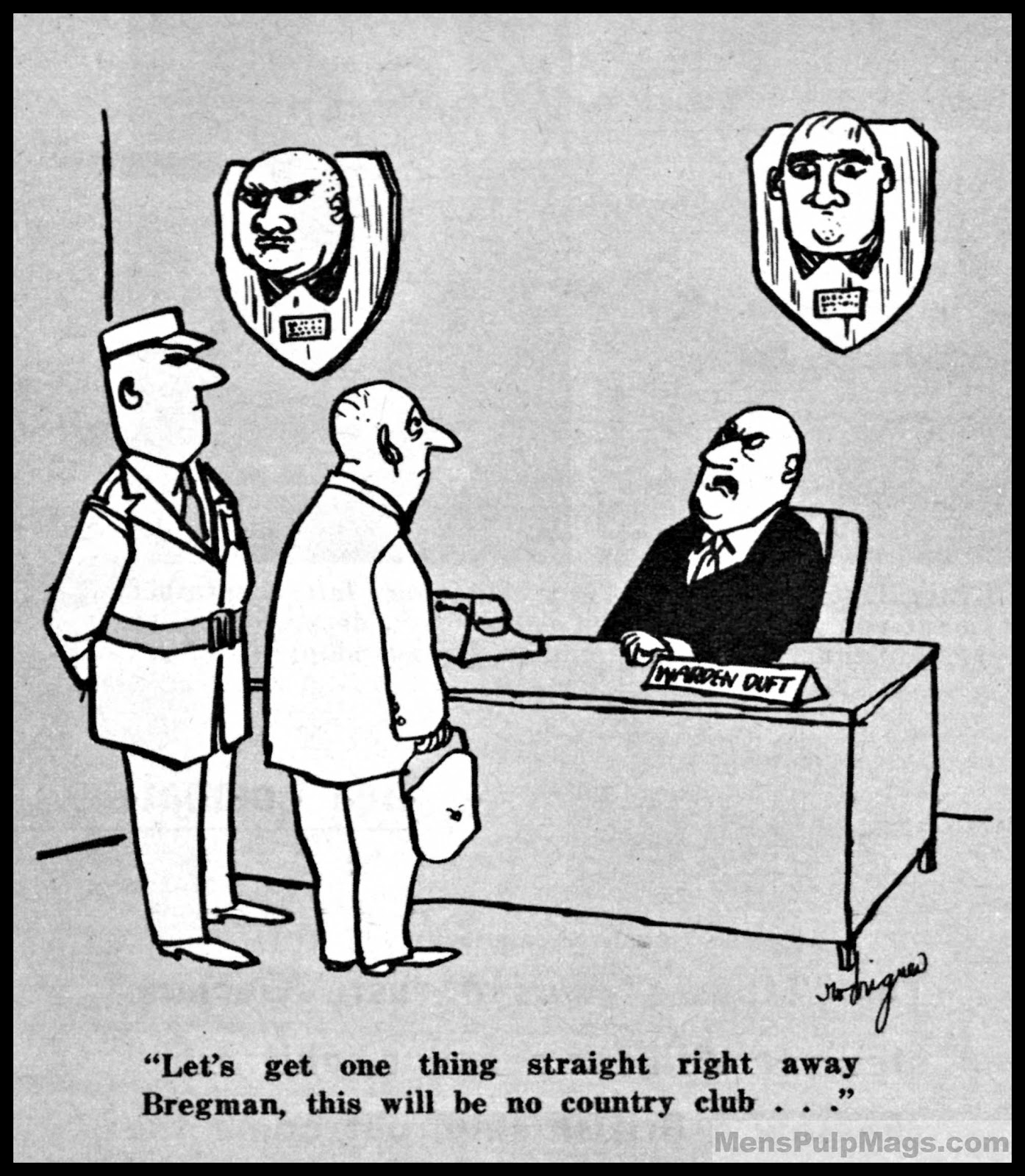 A while back in the Men’s Adventure Magazines & Books Facebook Group, I started a tradition of posting some of my favorite classic cartoons from men’s adventure magazines on Sunday mornings.

I guess that reflects my nostalgic love for both MAMs and the full-color Sunday cartoon inserts that were a long-running tradition in local newspapers back when local newspapers still existed in most cities and towns.

As I posted my most recent Sunday cartoon post in the Facebook group, I realized I had never done a post on this blog about cartoons in MAMs. So I decided to start a new tradition by doing a post about cartoons here every once in a while.

I’ll start with one that generated a number of comments from members of the group who are fans of NATIONAL LAMPOON — a cartoon by Charles Rodrigues from the March 1959 issue of MEN magazine.

It shows a new arrival at a penitentiary in the office of the prison warden. On the wall behind the warden are the heads of two prisoners, mounted on plaques like hunting trophies. In the caption, the warden tells the prisoner: “Let’s get one thing straight right away Bergman, this will be no country club…”

Charles Rodrigues, who was born in 1926 and died in 2004, was one of the most widely-published and beloved cartoonists of the latter half of the 20th Century.

His cartoons appeared in scores of men’s magazines, from the low end, low circulation girlie mags and dozens of different MAMs to high end slicks like ESQUIRE and PLAYBOY.

Rodrigues cartoons were also regularly published in mainstream magazines, like TV GUIDE, the STEREO REVIEW, and alternative magazines like Paul Krassner’s THE REALIST.

He also did three comic features for the Chicago Tribune-New York News Syndicate: “Eggs Benedict,” “Casey the Cop” and “Charlie.” 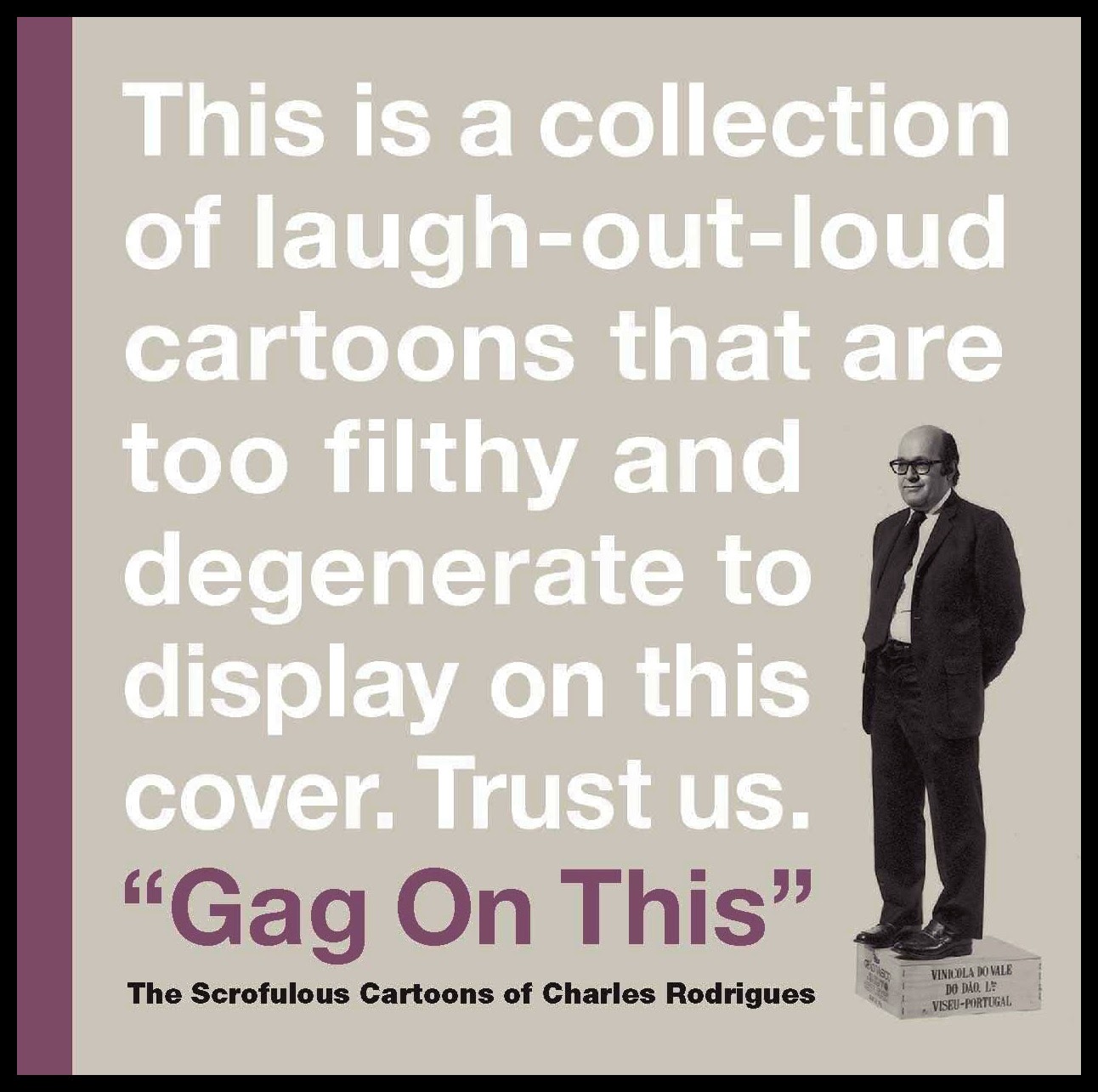 But Rodrigues is probably best known for the work he did for NATIONAL LAMPOON magazine.

Rodrigues had a cartoon in the first issue of NATIONAL LAMPOON, published in April 1970 and was a regular contributor to that gloriously gonzo, satiric publication until 1993. He contributed standalone cartoons, the “Ray & Joe” comic strip and occasional LAMPOON covers.

All of the cartoons by Rodrigues reflect a darkly wicked sense of humor, much like Charles Addams. A good percentage from the ‘70s on in the LAMPOON and men’s magazines feature nudity and sexual situations.

Some of his best cartoons have been collected in two fairly recent books: GAG ON THIS: THE SCROFULOUS CARTOONS OF CHARLES RODRIGUES and RAY & JOE: THE STORY OF A MAN AND HIS DEAD FRIEND. You can also still find copies of older vintage paperbacks that feature Rodrigues cartoons, such as SPITTING ON THE SHERIFF: AND OTHER DIVERSIONS and TOTAL HARMONIC DISTORTION: CARTOONS FROM STEREO REVIEW, though they tend to be pricey.

Various men’s adventure magazines published Rodrigues cartoons before the NATIONAL LAMPOON and PLAYBOY made him particularly well known. A lot of his early cartoons in MAMs are single panels, like the one at the top of this post. But even in the ‘50s, he was popular enough to warrant 2-page spreads featuring multiple cartoons in a number of MAM issues. Three of those are shown below.

I realize it’s a bit hard to read the captions in a 2-page spread that has to fit within whatever browser and device you’re using. So, I decided to start by show blown up scans of one of my favorites each of the three.

They include: a native headshrinker who just washed a head’s hair and “can’t do a thing with it”; a death row inmate whose hopes are dashed when gets a letter from the governor that starts with “Dear murdering scum of a rat…”; and, an undertaker who explains that he carries a stethoscope because “it never hurts to make sure.” 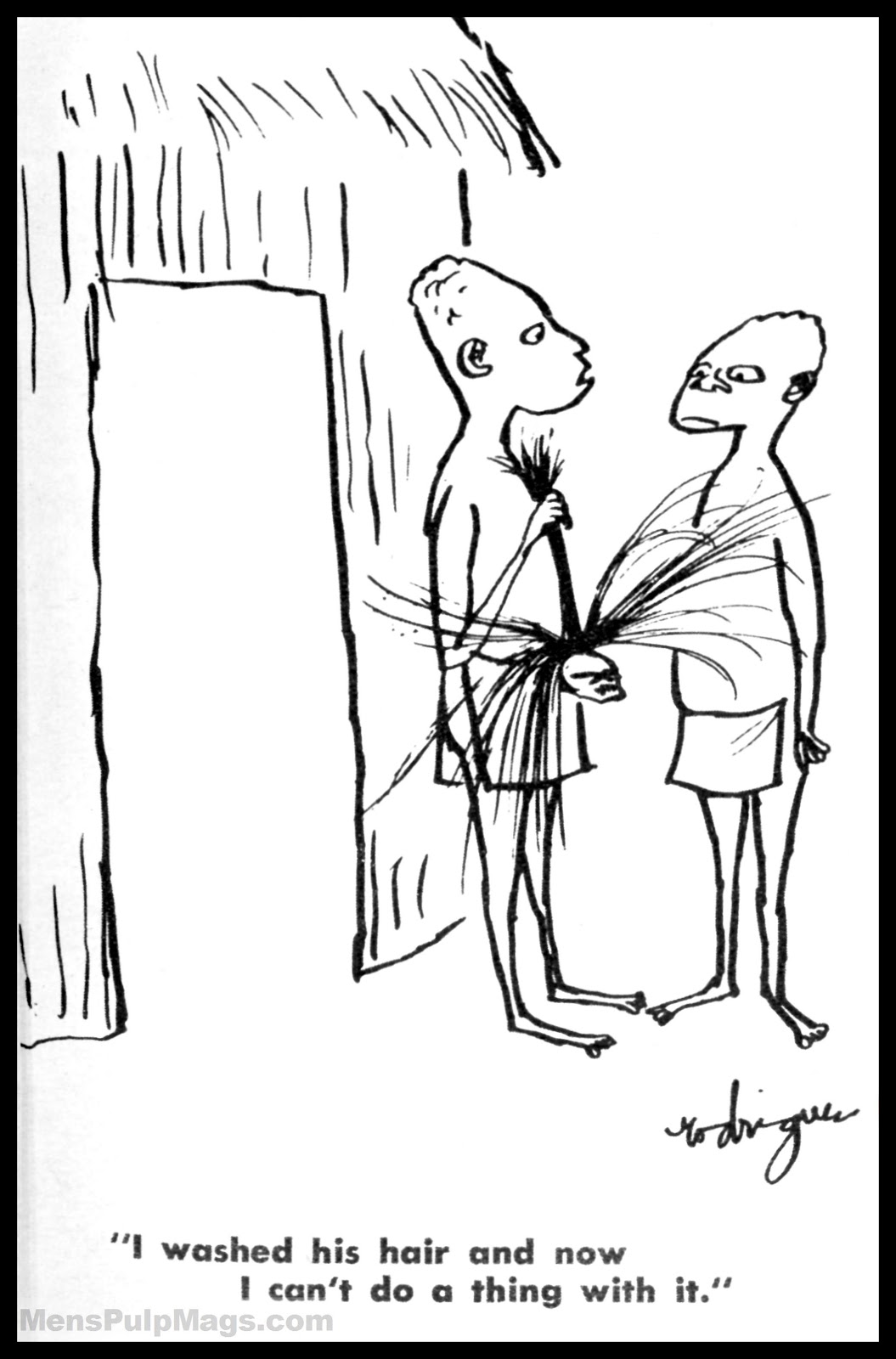 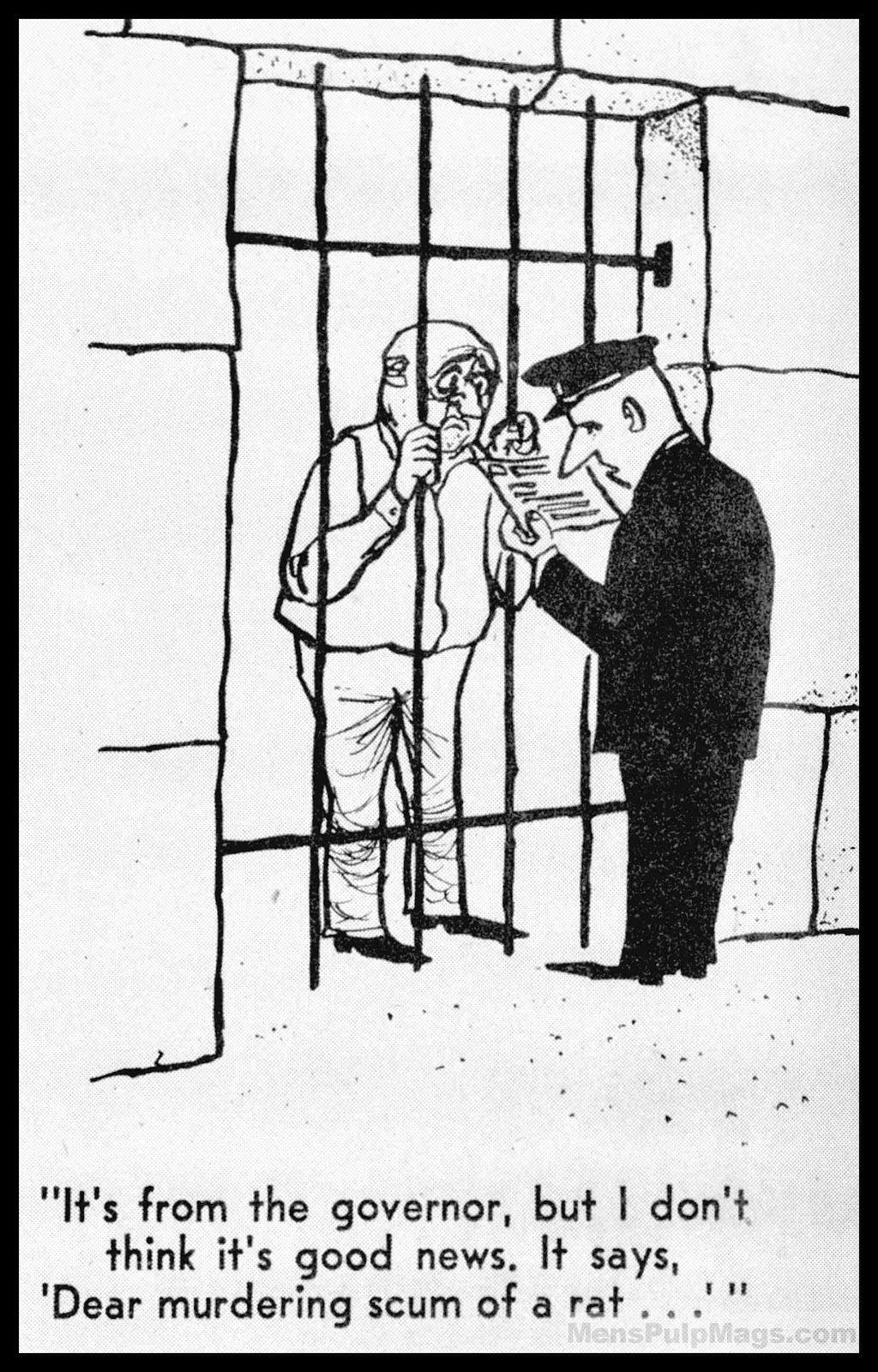 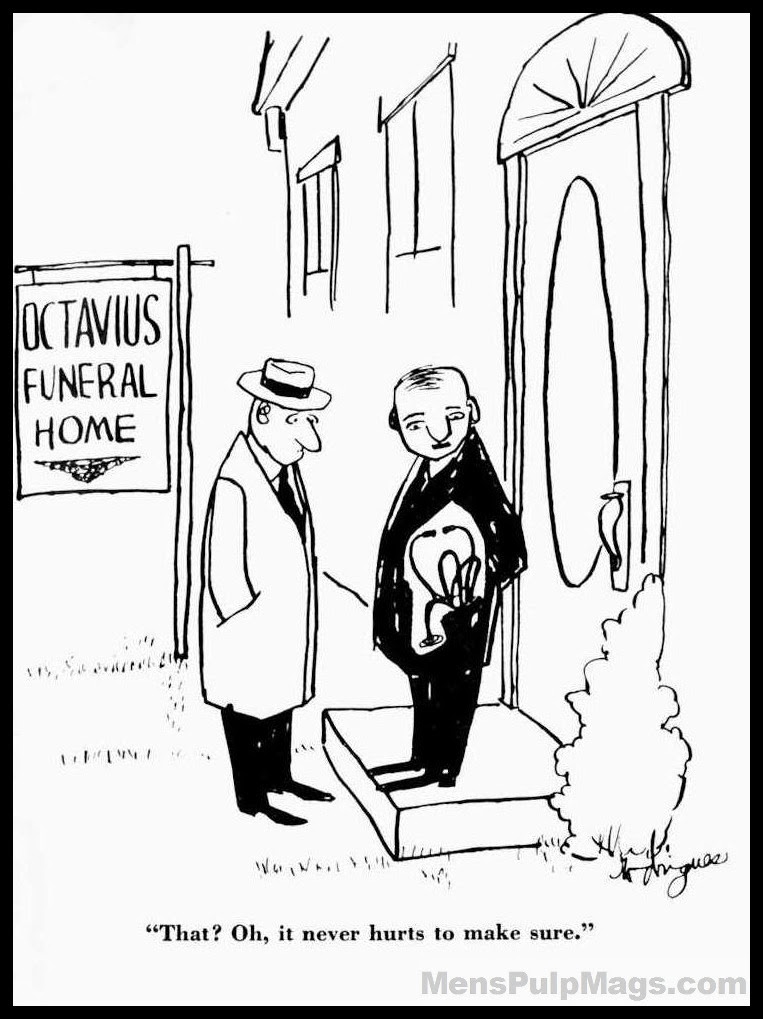 If you click on the 2-page spreads below, you can blow them up on whatever you’re using to read this post and should be able to make out the captions. However, for those who can’t, I’ll provide some descriptions and type out some of the captions.

The cartoons at the top of both pages in that MALE spread are all visual gags that you’ll get if you study them a little. The one at top left is chuckleworthy when you see what’s in the block of ice that’s being delivered to the crematorium in the background. The joke in the next one involves the absurdity of a suggestion box in the prison hallway leading to the death chamber. The one at top right is a play on the old waterless desert cartoons that often show the skull of a cow in the scene.

The cartoon at bottom left of the MALE spread makes sense if you’re old enough to remember when guys wore suspenders. It was a painful prank back then to pull someone’s suspenders way out and then let them snap back. In the case of the Rodrigues cartoon, it’s a form of torture two cops are using on a suspect. The police captain looking on says in the caption, “I told you I didn’t want any rough stuff.” At bottom right, next to the headshrinker cartoon, a wife is telling cops at a morgue: “The last time I saw him was about 5:30 — I asked him to go out for a loaf of bread.” In the background, her husband’s corpse has that loaf in a literal death grip. 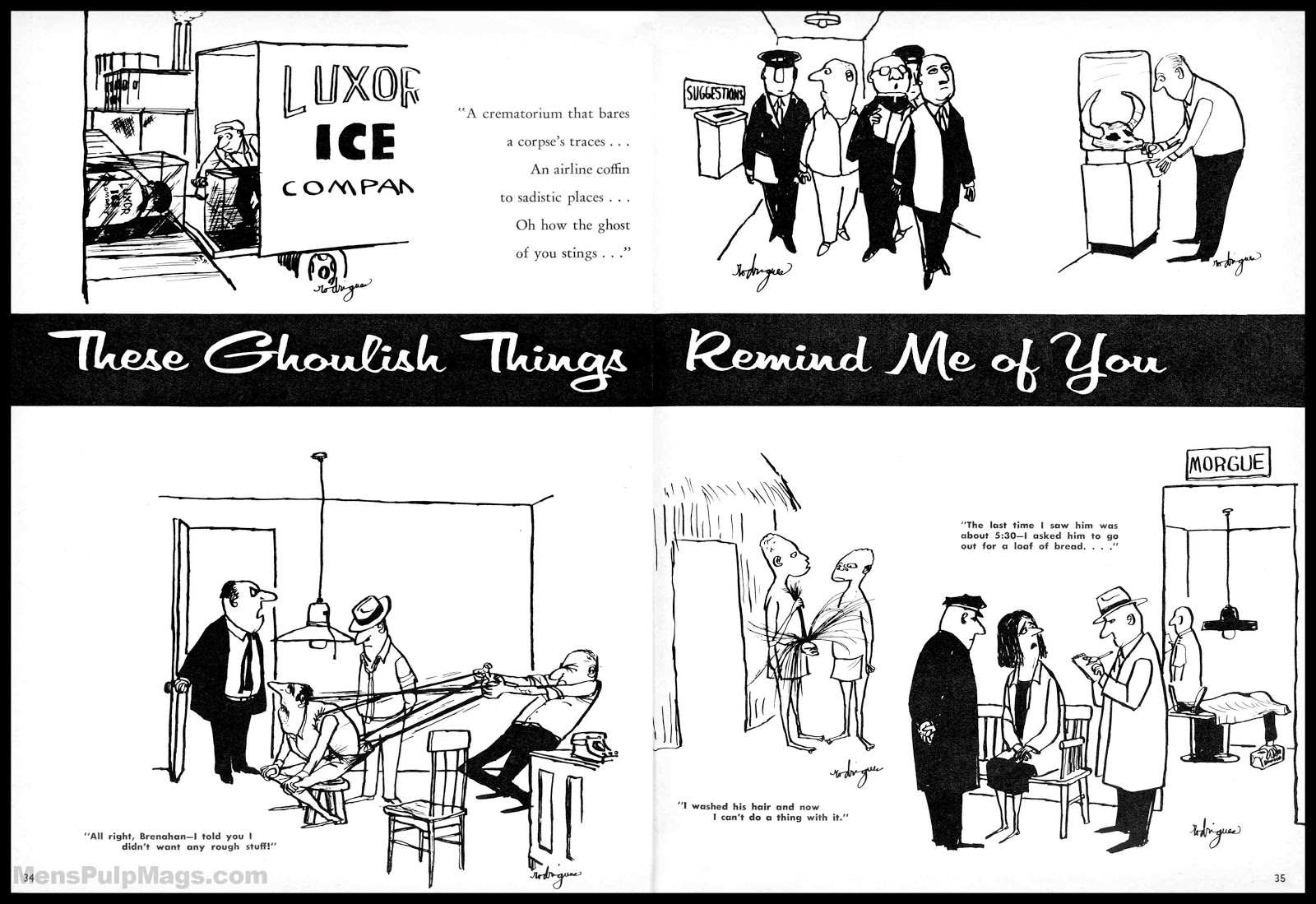 This next 2-page spread is from MAN’S LIFE, October 1959. It’s titled “EXIT LAUGHING” and features a set of cartoons about executions. An introductory paragraph notes:

“Probably one of the leading artists of the macabre in humor is Charles Rodrigues, who passes along this advice — ‘If the time ever comes and you have to take that last walk you might as well do it like a man — kicking and screaming all the way — Rodrigues would! P.S.: Try getting a few bites in, too.’”

On the left hand page are two inmates hoping the governor will call with a last minute reprieve: below the one I show in a close up above, there’s another with an inmate carrying a phone to the gallows. A guard tells him to give it up in the caption, because “The governor’s not going to call.” At top on the right hand page, one prison guard is seen kicking an inmate toward the gallows while another one explains to a third, “The jury that convicted him recommended no mercy.”

The cartoon underneath that at left also shows a group of guards and a doomed man at a gallows. A guy in a dress coat and hat is trying to keep the prisoner from going to the noose. A guard observes: “That’s what I call a fighting lawyer!” At bottom right, a guard looks at two deep, parallel gouges in the hall leading to the death chamber and says drily: “Boy, did HE put up a fight.” 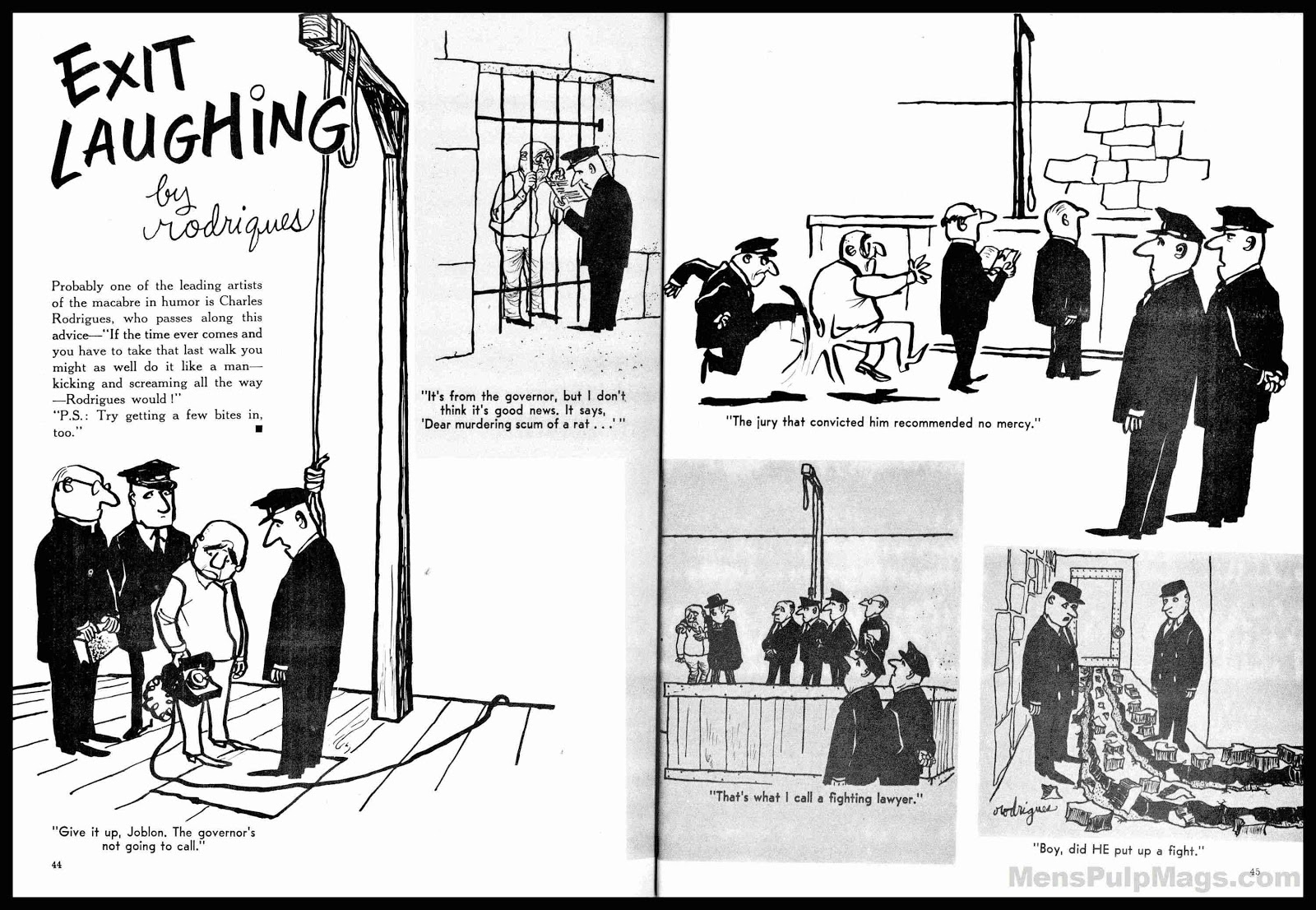 MALE and MAN’S LIFE were both among the longest-running men’s adventure mags, lasting for several decades. Another 2-page spread of Rodrigues cartoons appears in the October 1959 issue of one of the most short-lived MAMs, HIGH ADVENTURE. That issue is a good collectible for MAM fans, since it’s the third of only three issues of HIGH ADVENTURE that were published.

The Rodrigues spread in HIGH ADVENTURE is titled “GRISLY GRINS.” It start with a cartoon about new widow, who is so not into grieving that she stopped at a car dealer on the way back from the funeral to order a new sports car. Below that on the left page are two captionless cartoons. One shows the son of a mad bomber emulating his father. The other shows a kid pulling a shrunken head out of a cereal box, reflecting the shrunken heads craze that was happening at the time. (See the article “WHEN SHRUNKEN HEADS WERE BIG!” — a guest post on this blog by John Navroth, Editor of MONSTER MAGAZINE WORLD.)

At the top of the right hand page in HIGH ADVENTURE is the stethoscope-carrying mortician cartoon. Next to that is one showing a woman frozen in the act of shoveling snow. Her husband admits to a neighbor, “You’re right, it’s not a snowman.” Below those is a captionless cartoon showing an oil delivery guy looking askance at the trash cans full of ashes on the sidewalk in front of the crematorium he’s delivering heating oil to. 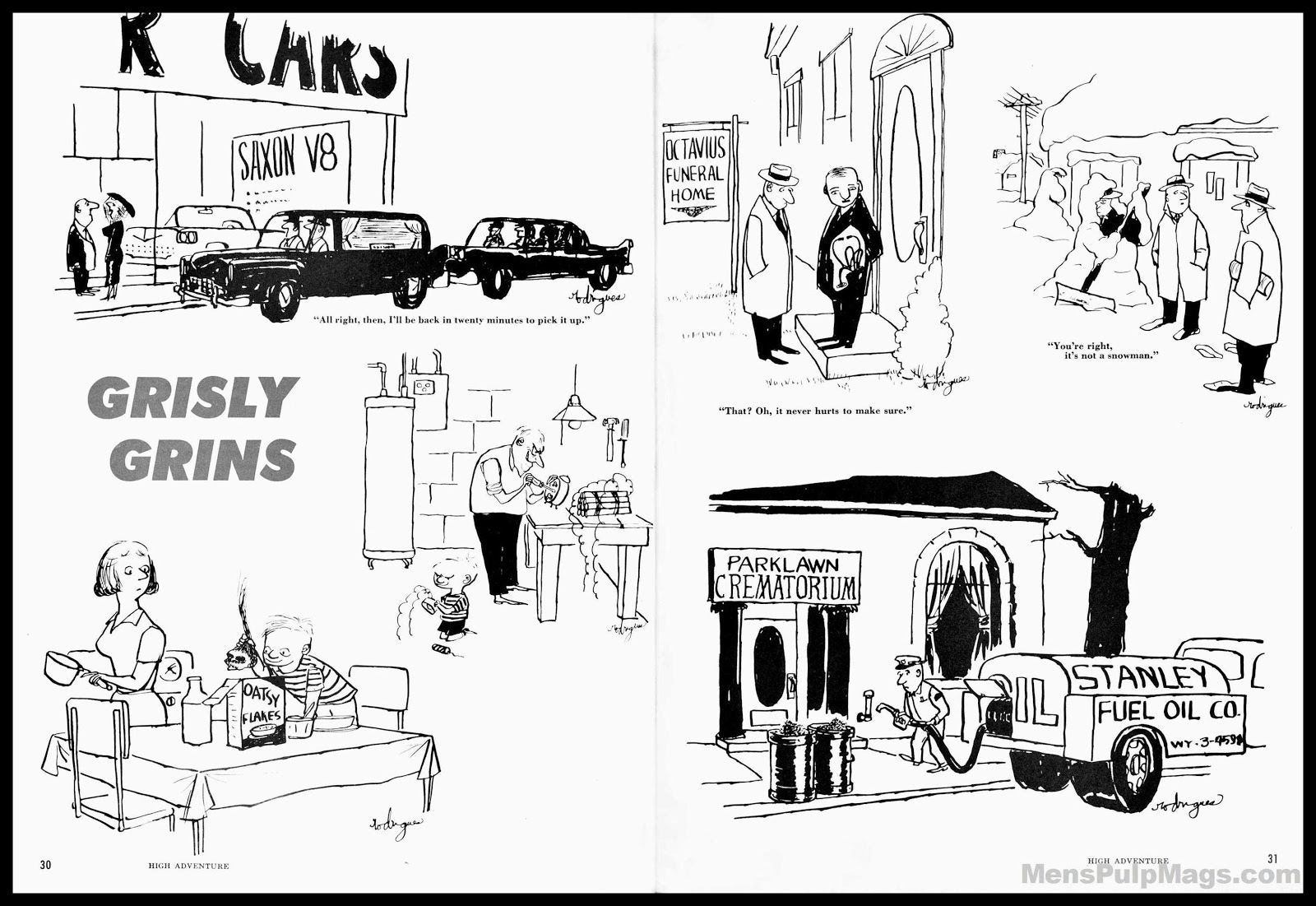 Coming up here, I’ll provide a look a Mike Shayne stories in men’s adventure magazines, then an interview with writer, editor and publisher Bill Cunningham, head of the growing and innovative Pulp 2.0 publishing imprint.

The Bruce Minney Interview– Part 2: “Sweat Magazines,” paperbacks and beyond…