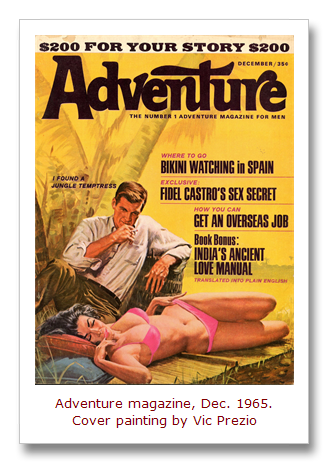 It’s often hard to sort out the truly true stories from the phony ones in men’s adventure magazines.

The authors and editors of men’s adventure mag stories were masters of creating plausible “true stories” that put real facts and photos into yarns that were otherwise pulp fiction.

There’s a great example in the December 1965 issue of Adventure magazine about Fidel Castro.

It’s promoted as “FIDEL CASTRO’S SEX SECRET” in a headline on the cover, which features a nice noir-flavored painting by artist Vic Prezio.

Inside, the story is titled “Castro’s BEST-KEPT Secret.”

It’s written by an American who says he was a student at the University of Havana in 1948.

The story includes a couple of UPI photos of Castro and enough real facts about him and Cuba to make it sound pretty darn believable.

The “sex secret” that gets revealed at the end is almost certainly not true, but it is a bit of true pulp writing genius.

It supposedly explains why Castro became a megalomaniacal “madman” – and how his Cuban Revolution might never have happened, had it not been for one sex-related event in 1948. 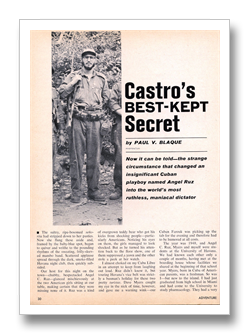 I won’t give away the big “sex secret” here. I’ll let you read the story for yourself, by clicking on this link to download it in PDF format.

My home is near Key West, which is only 90 miles from Cuba. And, despite the long-standing America trade embargo, it’s not unusual to find some contraband Cuban cigars down here.

I’m willing to bet a Cuban cigar that, if you’re into the kind of stuff I post on this blog, you’ll enjoy reading about “Fidel Castro’s Sex Secret.”

And, speaking of pulpy sex and fiction, I have a new book to recommend for fans of such stuff.

It’s titled The Dames, Dolls and Delinquents: A Collector’s Guide to Sexy Pulp Fiction Paperbacks. It was published a few months ago by Krause Publications.

The author is Gary Lovisi, who has written some other interesting non-fiction and fiction books that have high appeal for pulp fans.