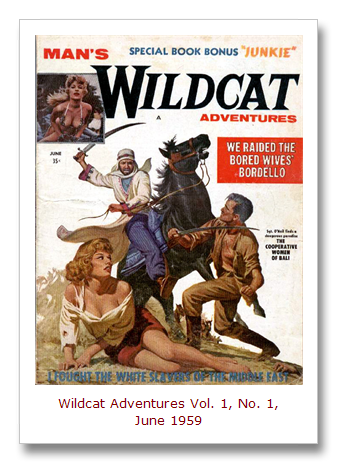 My previous entry here provided a look at a classic issue of the men’s adventure magazine Wildcat Adventures from 1960, the second year of the magazine’s run. 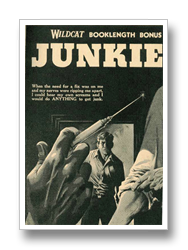 It is particularly cool because it includes an excerpt from William Burroughs’s famed pulp novel Junkie. (It also has a rip-snorting “Arab peril” style cover painting.)

The novel had been published six years earlier, so it wasn’t exactly a timely excerpt. But it did add a little touch of literary “class” to the debut issue.

Below are some cover scans of issues from the following years. As usual in Wildcat Adventures the artists are uncredited, which is really too bad because some of the cover paintings are pulp masterpieces. It would nice to know who painted them.

The cover of the March 1960 issue has a gonzo scene of a plane that has crashed in the ocean – apparently in the middle of a hijacking and a party (both of which seem to be continuing).

On the cover of the December 1961 issue, a group of scantily clad babes are performing some exotic bondage and torture ritual on a hapless guy who doesn’t seem to be enjoying himself – though it’s pretty clear that readers of Wildcat Adventures enjoyed this kind of stuff. 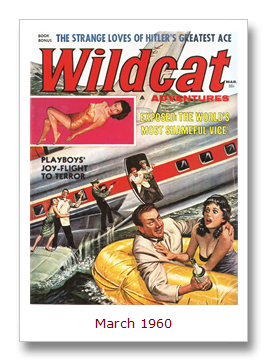 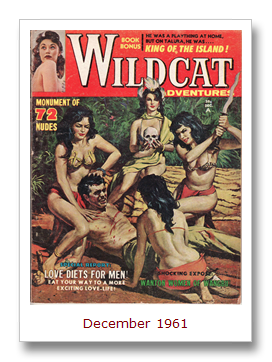 On the July 1962 cover, it’s a woman who is in danger, from wild boars that appear to be the trained killer pets of some odd looking “natives.” The July 1963 issue has a bizarre Nazi bondage and torture cover that provides a glimpse of the “NAZI TORTURE THEATRE.” 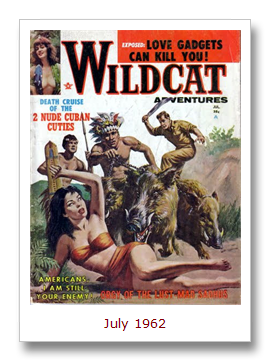 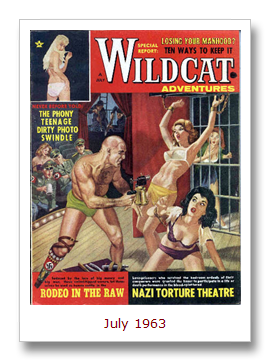 The August 1964 cover is another over-the-top wonder, a rape scene in a library, illustrating the story “BLACK LEATHER LIBRARY LUST RAID.”

I wonder what the Dewey Decimal System number is for that category of pulp fiction. 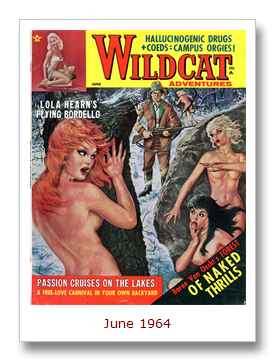 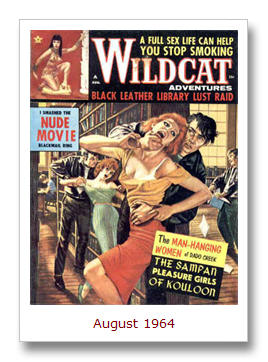