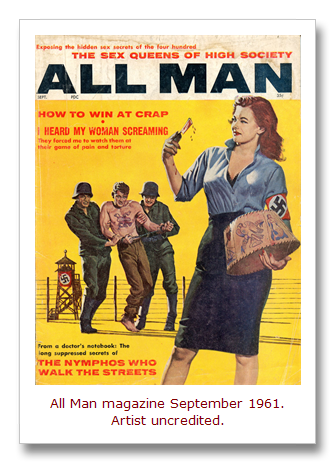 Let me start with some clear disclaimers…

I am a NOT a “fan” of Nazis. I do NOT “enjoy” Nazi torture and bondage art.

I also fully realize why the implied story told by the cover shown at left in this post – from my copy of the September 1961 issue of All Man magazine – would be seen as offensive. (By the way, the origins of stories about Nazi lampshades made from human skin is discussed in detail on the great Straight Dope website.)

I am intrigued, though, by the phenomenon of Nazi bondage and torture art in vintage men’s adventure magazines from the 1950s, 1960s and early 1970s.

World War II veterans like my father were a core demographic target of these magazines when the genre was first developed in the late 1940s.

I understand why those vets might relate to artwork and stories that portrayed the Nazis as evil, especially vets who served in Europe.

And, the covers that show-scantily clad damsels in distress being tortured didn’t really pave new ground in the pulp magazine realm.

They were basically descendants of the “weird menace” or “shudder pulp” school of cover art that was popular on pulp magazines in the 1920s, 1930s and early 1940s.

But the postwar men’s adventure, or “sweat,” magazines did create some new cover categories. One of those is comprised of covers that feature paintings of male prisoners of war being tortured. 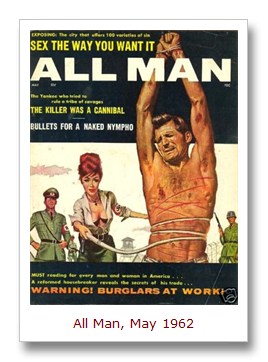 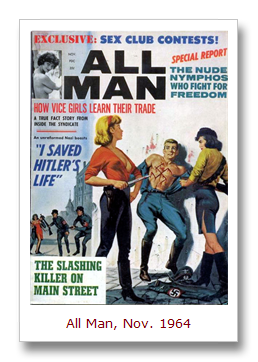 There are also men’s pulp magazine covers and illustrations showing American prisoners of war being tortured by “evil Japs,” including Geisha girls.

And, during the Cold War years, covers often featured evil Commies as the torturers – Communist Chinese in Korea, the Viet Cong and Cuban Commies. But Nazi bondage and torture covers remained a favorite of editors and readers in the ‘50s, ‘60s and early ‘70s, and of collectors today.

Why would American veterans, especially WWII vets, be attracted to covers that shows American soldiers being tortured – by Nazis or anyone else?

As the son of a WWII vet, and a fan of men’s adventure magazines, I’ve pondered this question. So far, I haven’t come up with a definitive answer.

However, like many collectors of men’s adventure magazines, I do admire the wartime bondage and torture covers that were done for the genre by great pulp artists like Norm Eastman and Norman Saunders.

As weird and over-the-top as they are, they are often also incredibly good and interesting examples of vintage illustration art.