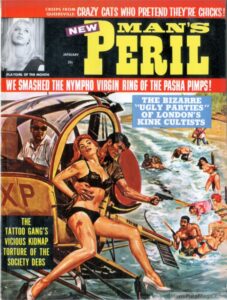 A few weeks ago I got an email about some previous posts I’d done on my blog about actress and model Eva Lynd.

“Hi Robert –
I am well, alive and living in Hollywood. I just read all the fun stuff you have about me on your blog.
It is nice to be remembered after all these years.”

It was signed by Eva Lynd.

To say that getting that note from Eva was a pleasant surprise would be a major understatement.

In the 1950s and 1960s, Eva Lynd was a favorite model of the great pulp illustration artist Norm Eastman. 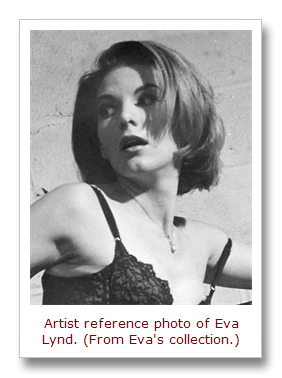 Her image is featured in dozens of Eastman’s men’s adventure magazine cover paintings, including many of the iconic evil Nazi scenes he created.

In addition, pinup photos of Eva — taken by some of the best glamour photographers of the era, like Peter Basch, Earl Leaf and Jerry Yulsman — were published almost all of the top men’s adventure and “girlie” magazines.

On top of that, Eva was (and still is) an actress. She appeared on many popular television shows in the ‘50s, ‘60s and ‘70s and in cult classic movies.

She also played the famed “Girl in the Tube” in the classic Brylcreem commercial, one of the most famous TV ads ever made.

So, for an avid fan and chronicler of retro pop culture like me, getting an email from Eva Lynd was more than a just pleasant surprise. It was more like a mind-blowing thrill.

Since then, the thrill factor has increased exponentially.

After I received her first note, Eva and I began an ongoing correspondence.

With the help of her computer-savvy husband, actor Warren Munson, she has been sending me scans of photographs and magazine clippings from her personal collection.

She has also been telling me fascinating anecdotes about her life and the artists, actors and photographers she worked with. 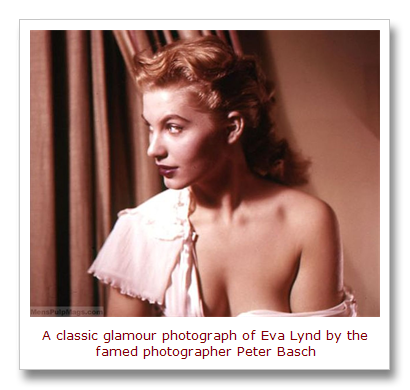 Lately, this has turned into four-way conversation that includes Rich Oberg, owner of the world’s biggest collection of men’s adventure artwork and magazines (featured in the book MEN’S ADVENTURE MAGAZINES IN POSTWAR AMERICA) and Wyatt Doyle, my co-editor on the recently published anthology of men’s adventure magazine stories WEASELS RIPPED MY FLESH!

One of the E-Team’s current missions is to inventory as many of the cover and interior illustrations Eva modeled for as possible, as well as her appearances in glamour photo spreads and on magazine covers.

Some of those images and anecdotes will show up on this blog in the weeks and months ahead. Others may eventually show up on a separate Eva Lynd website and in a future book.

In many Norm Eastman cover paintings, Eva is the female model and Steve Holland is the main male model. If you’re a fan of pulp magazines and paperbacks, you probably know Holland was a favorite model of many illustration artists in the ‘50s, ‘60s and ‘70s. Even if you don’t know him by name, you probably know his rugged face and hunky body. 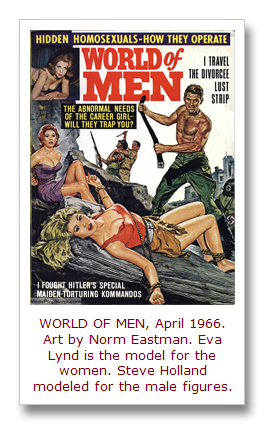 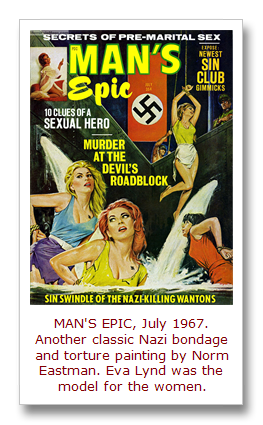 He’s best known as the model James Bama used as Doc Savage for the Bantam paperback series. But his highly-recognizable, iconically-manly face has appeared in hundreds, maybe thousands, of magazine covers and interior illos and paperback cover paintings.

In Norm Eastman’s men’s adventure illustrations, Holland frequently served as the model for the hero in the scene. Sometimes he was the bad guy.

In some cases, he was both. For example, on the cover of the April 1966 issue of WORLD OF MEN, Steve Holland was the model for the sadistic Hitler Kommando who’s getting ready to use a belt on the blonde, played by Eva Lynd. Meanwhile, Holland is also the hero in the background who is knifing a Nazi soldier and coming to save Eva (who also modeled for the bound redhead in the scene).

Eastman also used himself as the model for villains and other characters.

In the his painting for the cover of the January 1965 issue of MAN’S PERIL, Eastman is the helicopter pilot. Eva Lynd was the model for the scantily clad damsel in distress hanging out of the helicopter door — as well as for the less fortunate, unrescued ladies in the background, who remain prisoners of “The Tattoo Gang” in the story the illustration goes with. 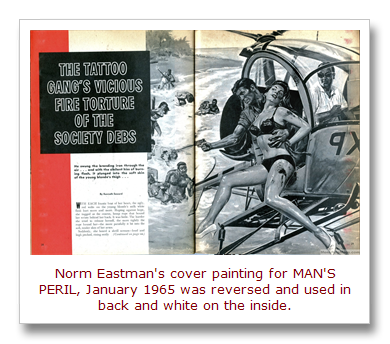 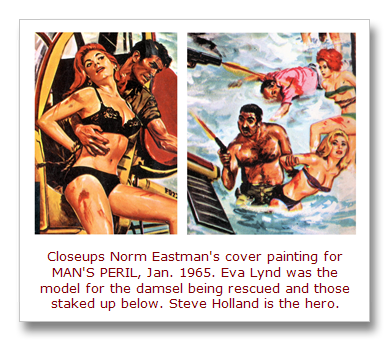 Steve Holland was the model for the manly hero who is holding on to Eva and shooting at the bad guys below. 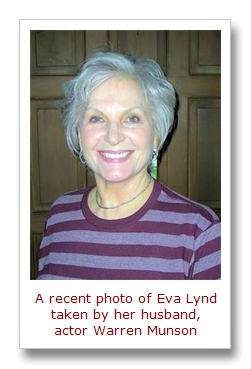 “I honestly don’t remember how I got to work with Norm Eastman. It is possible that the first time someone referred him to me as someone who needs models. I started working with him 1956 until 1958 when I went to California. Then again from 1964 when I returned to New York City until 1968 when I went back to California.

I loved working with Norm because he was always very professional and made the sessions a lot of fun. He always took lots of photos at each session.

I usually worked by myself or with the popular male model Steve Holland, who was also very easy to work with.” 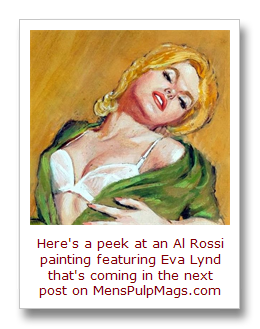 Eva recalled that Eastman usually shot reference photos of her and Steve Holland together, at his in-home studio in New York City, for covers that she and Steve both appeared in.

She said Eastman didn’t take photos of her and other female models together, even though in some of his cover paintings he used images of both Eva and one of his other favorite models, Shere Hite and Lisa Karan. (As noted in previous posts here, Shere and Lisa were also favorite models of men’s adventure artist Bruce Minney.)

Rich Oberg, who visited with Eastman before he died, said Norm would often cut out photos of different female and male models and paste them up into a collage to create the scene he wanted to paint.

Rich noted that Norm also identified his artist friend Mark Schneider as the model for some of the evil Nazis and other villains in his cover paintings.

Coming up: some pulp art featuring Eva as done by artist Al Rossi. Here’s a peek at right…

In the meantime, you can read the story about how Steve Holland and Norm Eastman ‘coptered in and saved Eva Lynd from the evil “Tattoo Gang” by clicking this link or the link below to download a complete digital copy of the January 1965 issue of MAN’S PERIL in my virtual newsstand.