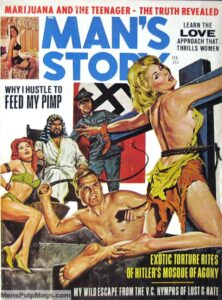 During the decades when men’s adventure magazines were being published, Eva Lynd was best known as an actress and a glamour photography model. 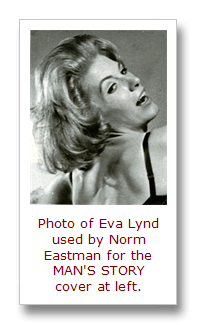 In the late 1950s, she was a frequent guest on the THE STEVE ALLEN SHOW, one of the most influential and widely-watched early TV variety shows.

As noted in her IMDB.com entry (which seems woefully incomplete) Eva appeared in episodes of a number of other popular television shows from the late Fifties to the early Eighties, including THE THIN MAN, PETER GUNN, HOGAN’S HEROES and CAGNEY & LACEY, sometimes credited under her birth name Eva von Fielitz.

She also has a notable place in TV advertising history, as the sexy babe who emerges from the tube of hair goop in Brylcreem’s “Girl the Tube” TV commercial.

ENTERTAINMENT MAGAZINE named that ad one of the “50 Best Commercials of All Time.”

Alluring glamour photos of Eva Lynd were featured on covers of and inside many of the vintage “girlie magazines” published in the Fifties and Sixties, including CAPER, DUDE, FOLLIES, GALA, MODERN MAN and SCAMP.

Pics of Eva also showed up in newspapers and mainstream magazines.

And, cheesecake photos of her — sometimes credited as Eva Lynd and sometimes as Eva von Fielitz — graced the pages of a number of men’s pulp adventure magazines from those decades, such as ADVENTURE and MAN’S ACTION.

But beautiful, blonde Eva Lynd has a much more prominent place in men’s pulp mag history than most glamour girls.

That’s because she was a favorite female model of Norm Eastman, the illustration artist who created many of the most iconic, most popular and most notorious cover paintings for the subgenre of men’s adventure periodicals commonly called “sweat magazines.”

In many Eastman cover paintings, Eva was the model for one of the gorgeous damsels in distress who are bound and tortured by sadistic Nazis, Commies or some other evil fiends. (Other favorite female models used by Eastman were Lisa Karan and Shere Hite.) 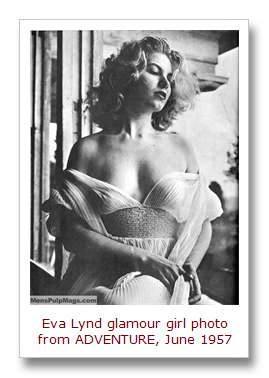 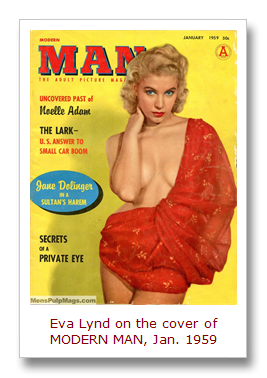 I first learned about Eva’s modeling work for Norm Eastman when I read the original 2004 softcover edition of the Taschen publishing book MEN’S ADVENTURE MAGAZINES, which features original paintings and covers from the Rich Oberg Collection.

Unlike the newer, smaller 2008 hardcover edition, the 2004 edition of MEN’S ADVENTURE MAGAZINES includes a whole chapter about the infamous Nazi bondage and torture covers, plus a rare interview with Eastman. 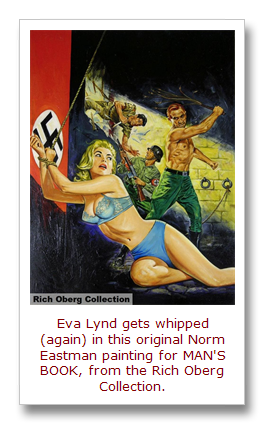 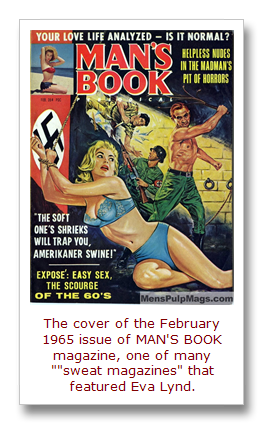 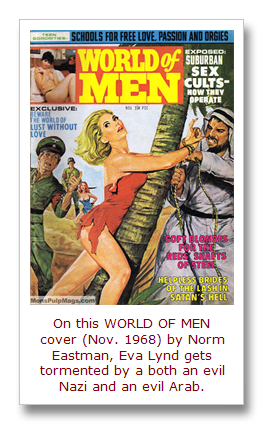 In recent years, Rich Oberg and I have became friends and collaborators on this blog and the Facebook group associated with it.

Last week, I posted a Norm Eastman cover in the group that shows a blonde nurse in a Vietnam War scene (NEW MAN, October 1968). She’s desperately trying to save the life of a bleeding, bandaged American GI as Viet Cong soldiers move in behind them. 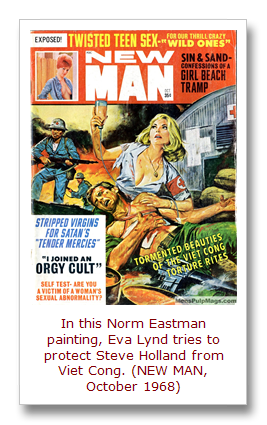 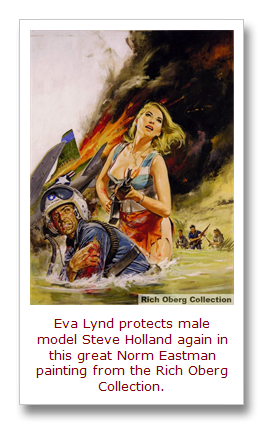 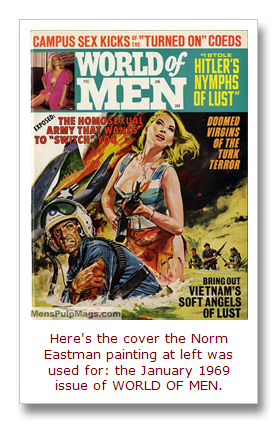 I knew the GI was modeled on Steve Holland, the great male model used by many men’s adventure and paperback cover artists. (Best known as the model artist James Bama used for his Doc Savage paperback cover paintings.)

Based on photos I had seen of Eva Lynd in various vintage magazines and in Rich’s book, I was pretty sure she was Norm’s model for the nurse.

Rich confirmed that ID in a comment in the Facebook group. He then treated members of the group by posting a series of photos showing some rarely-seen original Norm Eastman cover paintings he owns that feature Eva Lynd, along with the magazine covers they were used on.

Even cooler, Rich noted some things Norm Eastman had told him about the models he used for various covers when Rich visited Norm in California in 2004, a few years before the artist passed away. 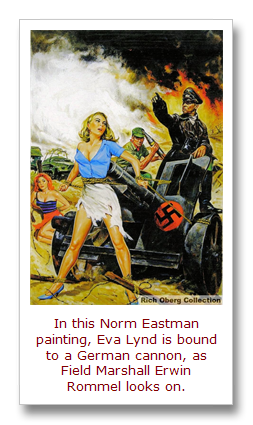 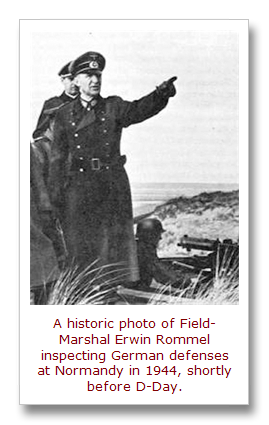 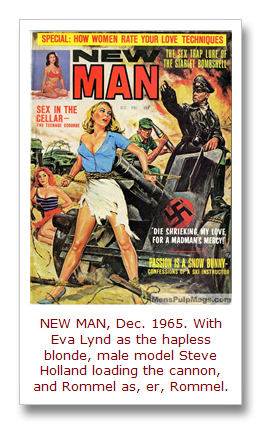 For example, Eastman personally confirmed to Rich that Eva Lynd was his model for the babe tied to the cannon in the cover painting on the December 1965 issue of NEW MAN magazine.

He also told Rich he used Steve Holland as the model for the Nazi soldier loading the cannon. The Nazi officer pointing forward was based on a historic photo of Field-Marshal Erwin Rommel inspecting German defenses at Normandy, shortly before D-Day in 1944.

The paintings, covers and stories Rich posted in the Facebook group inspired me to find out more about Eva Lynd and do a series of posts about her here on MensPulpMags.com, the Men’s Adventure Magazines blog.