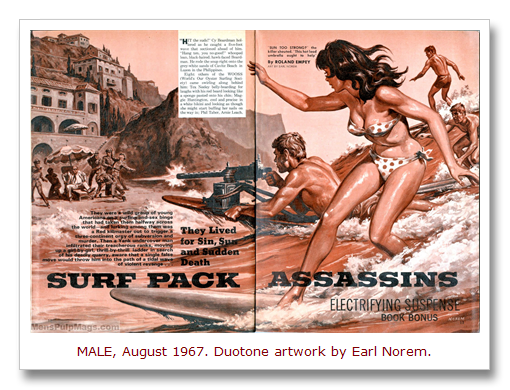 If you’re a regular reader of this blog or a member of our Men’s Adventure Magazines Facebook Group, you’ll be among the first to know when those books are available.

The time spent working on our new book has led to a long gap in posts here on the MensPulpMags.com site.

I plan to get back to doing posts here on a more regular basis now.

My last posts focused on men’s pulp adventure mag artwork by the great illustration artist Earl Norem, who died this past June.

As noted in one of those posts, several stories in our men’s adventure story anthology WEASELS RIPPED MY FLESH! feature great artwork by Norem, such as his interior illustrations for the “Book Bonus” version of Mario Puzo’s THE GODFATHER, in the August 1969 issue of MALE magazine. 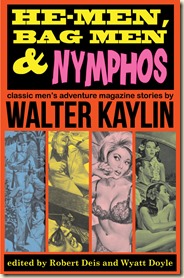 There are also some terrific Norem illustrations in our HE-MEN, BAG MEN & NYMPHOS story collection, which focuses on the wild action and adventure yarns written by Walter Kaylin.

That cool duotone shows the four members of the Surf Pack Assassin gang surfing in to attack a target.

Their target is relaxing on the beach, surrounded by bodyguards, thinking he is safe.

Nor would anyone expect to see a surfer firing a 50-caliber machine gun mounted on the front of his board. (Don’t try it yourself, folks. The Surf Pack Assassins are trained professionals.)

Earl Norem also did a second duotone and several small black-and-white illustrations for this story.

The second duotone shows one of the female pack members, Molly, trying to lure the main character, an undercover government agent named Dick Billings, into the gang’s multi-purpose hearse.

“This is a fine old hearse,” Molly says, literally twisting Billings’ arm. “Now let’s put a little life into it…” (Ya think she had to twist very hard?) 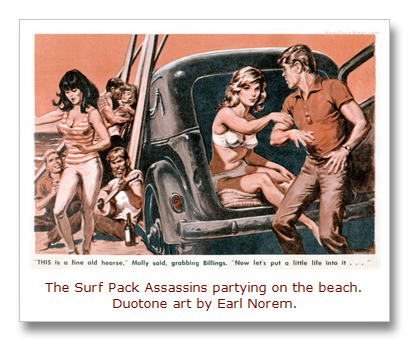 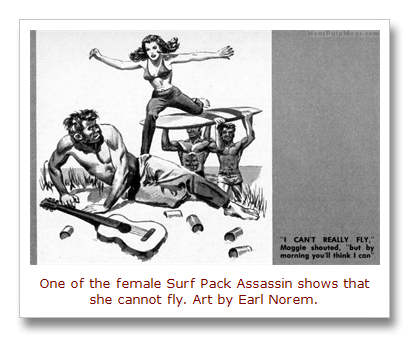 In one of Norem’s B&W illustrations for the story, another female pack member named Maggie demonstrates that she can’t really fly.

The other two B&W illos Norem did for the story are action scenes. One shows an explosion. The other shows a pack member surfing toward Billings with a big ass knife, hoping to cut his throat. 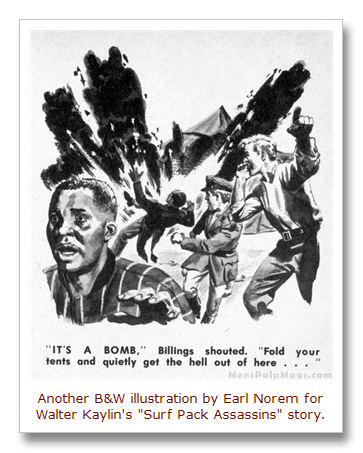 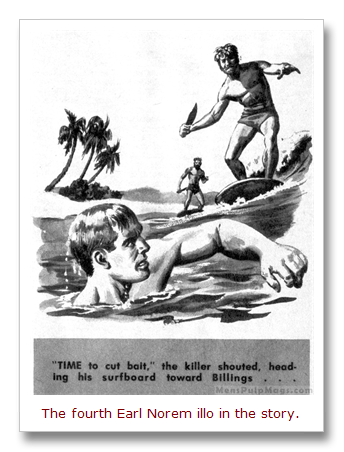 Earl Norem did second set of illustrations for another Walter Kaylin story in HE-MEN, BAG MEN & NYMPHOS titled “MEET OUR TERMS OR WE DESTROY 500 MILLION PEOPLE.”

Walter wrote that one under his common pseudonym Roland Empey.

It’s a long, almost novella-length yarn and, to my knowledge, it’s the only alternate history science fiction story featuring Nazis to appear in a men’s adventure magazine. Norem’s artwork for the two-page opening spread is especially awesome. 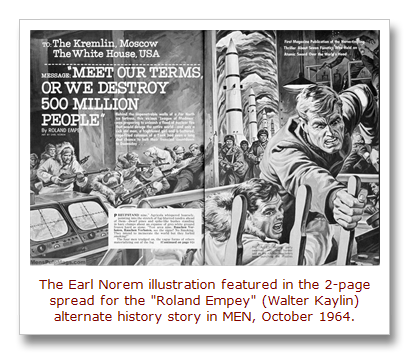 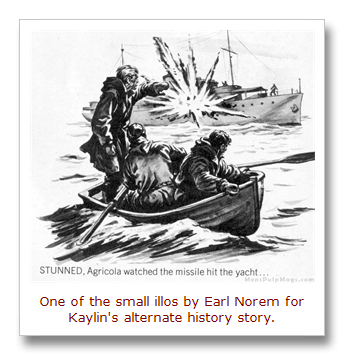 In the story, a group of Nazis soldiers and scientists who have remained hidden in a secret base under the arctic ice pack for decades suddenly emerge and threaten the world with the nuclear warhead missiles they have developed.

Dorr and Kaylin both wrote hundreds of stories for the classic men’s adventure mags published by subsidiaries of Martin Goodman’s Magazine Management company, such as ACTION FOR MEN, FOR MEN ONLY, MALE, MAN’S WORLD, MEN, STAG and TRUE ACTION. 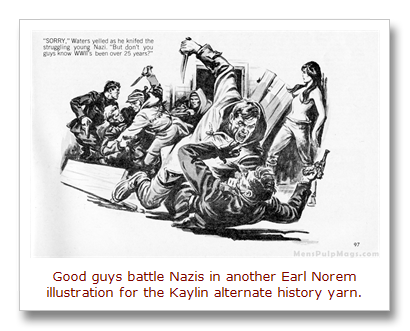 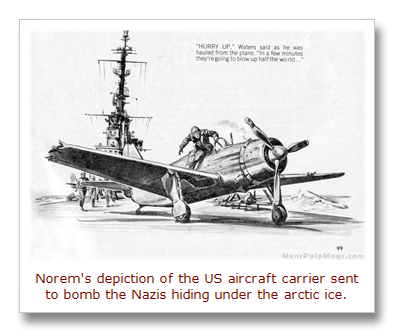 It was used for the humorous story “TODAY THEY CALL HIM FATHER ITALY,” originally published in FOR MEN ONLY, March 1975. 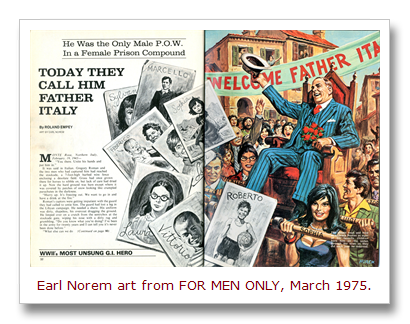 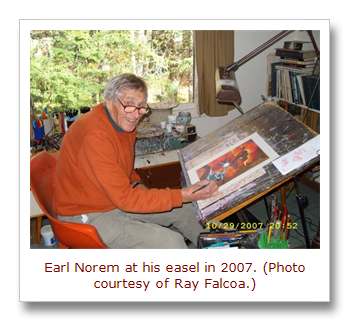 Why was the main character called “Father Italy”? Well, there’s a hint in the subtitle: “He Was the Only Male P.O.W. In a Female Prison Compound.”

If you haven’t bought a copy yet and are a reader of this blog, I’ll give you a 25% discount (that’s $5) if you buy it direct from me on eBay. Just add a note to let me know you saw the discount offer on MensPulpMags.com when you check out and I’ll send you back a rebate via PayPal. Here’s a link to my listings on eBay –> http://bit.ly/SubtropicBob-eBay