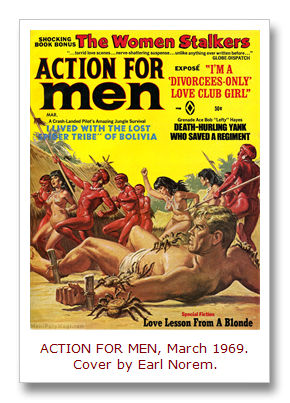 My previous post here took a closer look at Earl Norem’s amazing interior illustrations for the “Book Bonus” version of Mario Puzo’s novel THE GODFATHER in the August 1969 issue of MALE magazine.

We featured those illustrations in our WEASELS RIPPED MY FLESH! anthology, along with an interview Puzo did with our co-editor Josh Alan Friedman about his years as a writer for men’s adventure magazines published by Martin Goodman’s Magazine Management company.

Another classic Norem illustration we featured in WEASELS is an example of a cover painting that was later changed and repurposed for a second cover and a different story.

The first version was the cover painting Norem did for ACTION FOR MEN, March 1969.

It shows a hunky American guy staked out on the ground, with big tarantula-like spiders crawling on him.

In the background, some of the natives who staked him out are dancing around him. 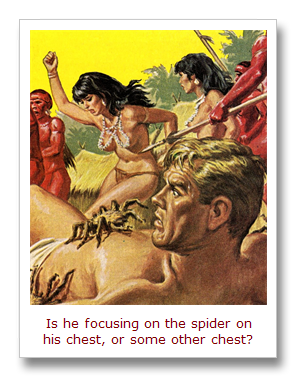 The men are covered in red body paint and look like iconic South American aborigines.

As usual in men’s pulp adventure mags, the female tribal members are non-native-looking babes who look like PLAYBOY models.

This amazingly cool Earl Norem goes with the story inside titled “I LIVED WITH THE LOST ‘SPIDER TRIBE’ OF BOLIVIA.”

It’s portrayed as a true story in the magazine, complete with a straight-faced introduction by the editor.

The editor’s note explains that the story is about U.S. Air Force Captain Charles Hines, the pilot of an American U-2 reconnaissance plane.

According to the editor, Hines was on a spy mission over Communist Cuba when his oxygen malfunctioned.

He ended up making an emergency crash landing in the jungles of Bolivia, where he became “the first white man to visit the Boronos — the most primitive tribe in the Western Hemisphere, if not the world.”

Of course, readers didn’t have Google back then. They couldn’t just search “Boronos tribe” Bolivia and find out that search returns the message “No results found.”

So, as was customary for men’s adventure magazines, the supposed reality of the story was played to the hilt.

In addition to adding a credible-sounding introduction, the editors used various stock photos to enhance the illusion.

I’d guess that few readers ever noticed (or cared) that the photos seem to show native people from a couple of different tribes or places. 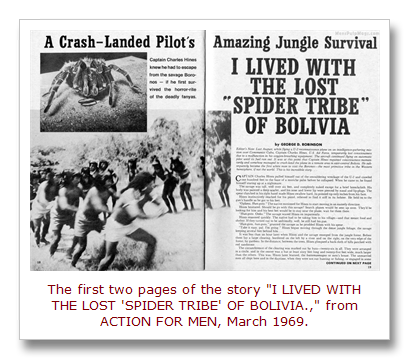 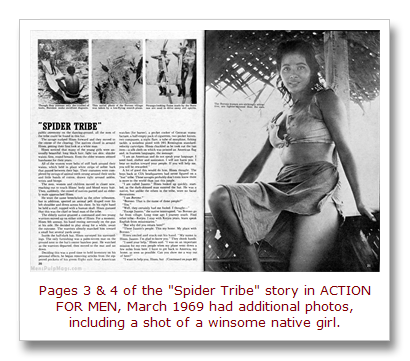 The “Spider Tribe” story is credited to George D. Robinson, a pseudonym of writer David George.

With that change, it was featured in an inset panel on the cover of FOR MEN ONLY, March 1971. The scorpion transformation was done so the painting could be used for the story “I WAS SEIZED BY PERU’S ‘SCORPION CULT’ TRIBE.” 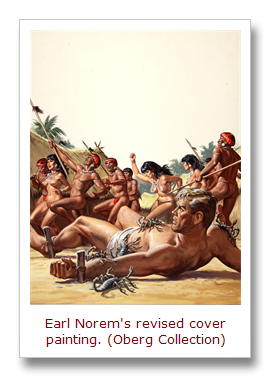 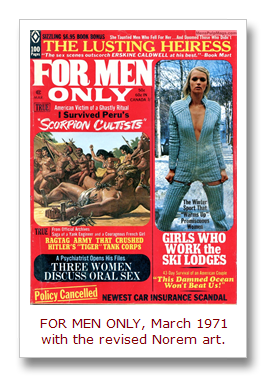 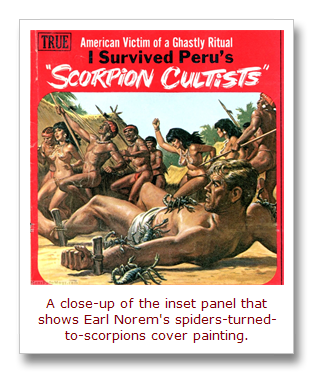 That one was written by one of the most notable authors who started out writing for men’s adventure magazines, Robert F. Dorr.

I’ve written quite a few posts about Bob Dorr here in the past and have had the pleasure of getting to know him through an ongoing correspondence.

He’s also an active member of our Men’s Adventure Magazines Facebook group, and regularly posts comments there that provide insights into what it was like to write for men’s adventure magazines back in the day. 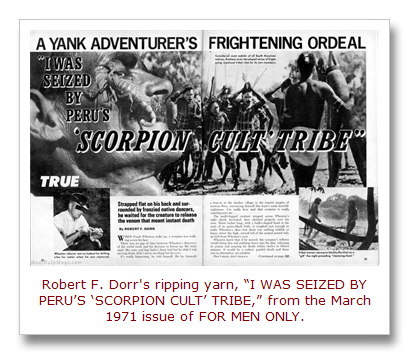 Bob wrote hundreds of stories for many different men’s adventure magazines in the 1960s and 1970s.

He went on become one of our country’s top military aviation historians.

In recent decades, he’s written hundreds of articles for military and aviation periodicals and 70 history books, most recently a highly-praised series about the crews of fighters and bombers of World War Two, that includes HELL HAWKS!, MISSION TO BERLIN, MISSION TO TOKYO and FIGHTING HITLER’S JETS.

This year, Bob branched out by writing the hard-hitting, expose-style book AIR POWER ABANDONED: ROBERT GATES, THE F-22 RAPTOR AND THE BETRAYAL OF AMERICA’S AIR FORCE. 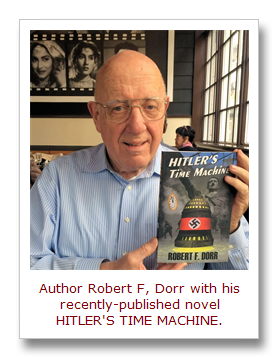 Although HITLER’S TIME MACHINE is Bob’s first novel, he got lots of practice writing fiction during his years as a regular contributor to men’s adventure magazines.

Like the “Spider Tribe” story in ACTION FOR MEN, Bob’s “Scorpion Cult Tribe” story in FOR MEN ONLY is another classic example of a MAM yarn that was published as a true story and accompanied by photos designed to create an air of credibility.

In this case, the editors apparently figured that most readers would not notice (or care) that the photos supposedly depicting a Peruvian tribe includes shots of some Middle Eastern guy with scorpions on his face and a group of Australian aborigines.

Those kinds of unintentionally humorous absurdities are among the things I love about men’s adventure magazines.

I also love the cool spiders-turned-to-scorpions cover painting by Earl Norem, which is a classic example of a whole sub-genre of MAM stories that involve animals as instruments of torture (a subject I wrote about in a previous post here).

And, believe it or not, the “Spider Tribe” and “Scorpion Tribe” stories are actually damn good pulp fiction yarns that we may feature in a future story anthology.

Want signed copies of any of our men’s adventure magazine story anthologies shipped anywhere in the world? Click this link or the image below to buy copies directly from me on eBay. 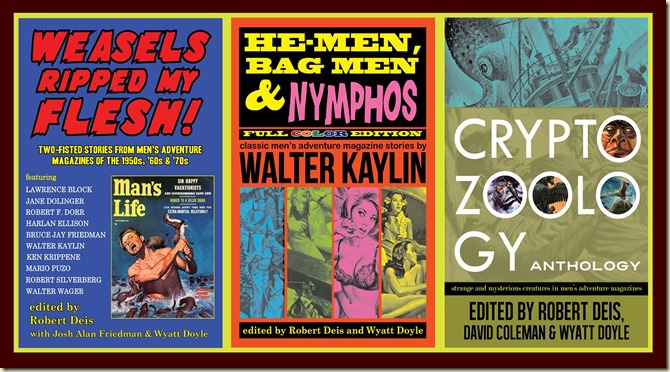