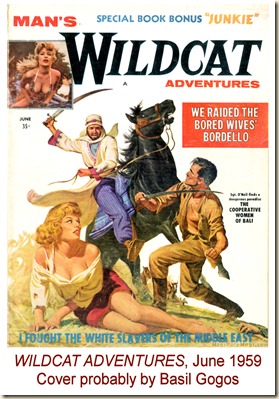 WILDCAT ADVENTURES was one of several classic men’s adventure magazines published by Robert C. Sproul, through his company Candar Publishing, sometimes misspelled as “Candor” by sources like the 1960 book WHO’S WHO IN MAGAZINE DISTRIBUTION.

Sproul launched Candar after working for several other publishing companies, including Hearst, Pocketbooks, Dell and Ace.

The following year he launched his best-known creation, the illustrated humor magazine CRACKED.

CRACKED was inspired by – and a spunky competitor of – William Gaines’ MAD.

His entry in the 1960 WHO’S WHO IN MAGAZINE DISTRIBUTION (shown below) noted that Sproul also published WEB DETECTIVE STORIES (a detective mag that started out as the science fiction magazine SATURN), the humor mags COLLEGE LAUGHS and FRENCH CARTONS, and IDEAL CROSSWORDS.

They are more akin to the Reese and EmTee “sweat magazines,” like MAN’S BOOK, MAN’S EPIC, MAN’S STORY, MEN TODAY and WORLD OF MEN.

But that’s not such a bad thing if you’re a true men’s adventure magazine fan.

Like the Reese and EmTee mags, Sproul’s MAMs featured many terrific cover paintings and interior illustrations.

They also included pulpy stories and articles that are generally fun to read and often quite good.

The premiere issue of WILDCAT ADVENTURES, Volume 1, No. 1, published in June 1959, is a prime example.

The cover painting for that issue was done by the great Basil Gogos. (Basil confirmed that when I was talking with him for the interview posted here.) 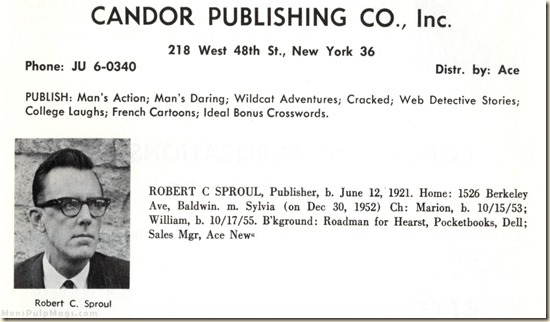 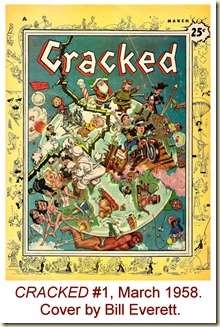 Gogos is, of course, widely known and even revered for the cover paintings he did for FAMOUS MONSTERS OF FILMLAND, the flagship magazine published by James Warren.

One reason it’s a must have for readers of this blog is that it also includes an excellent chapter about Basil’s work for men’s adventure magazines.

In fact, Basil actually did more cover and interior illustrations for men’s adventure magazines than he did for FAMOUS MONSTERS and other Warren horror mags.

Many of those illustrations were for the Candar MANs. 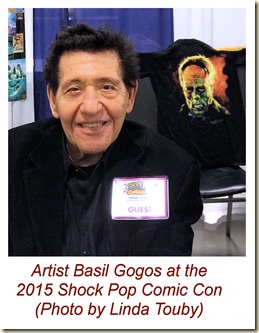 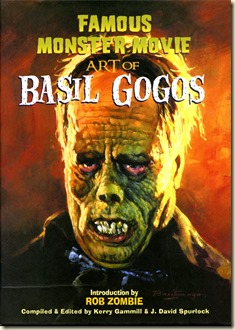 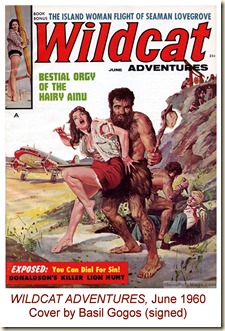 It shows a white-robed Arab wielding a scimitar on a rearing black horse, doing battle with a white guy holding a similar sword.

In the foreground, a scantily-clad damsel in distress looks on with bated breath and heaving breasts. 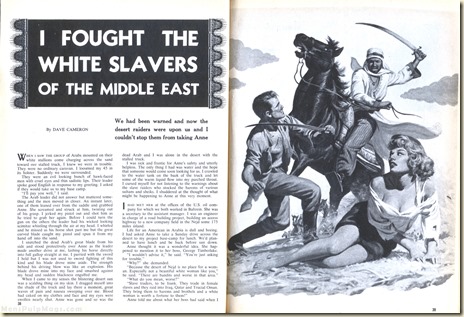 The painting goes with the story inside titled “I FOUGHT THE WHITE SLAVERS OF THE MIDDLE EAST” credited to Dave Cameron. (That’s either a pseudonym or the name of a writer who wrote nothing else that I could find.)

My art collecting friend Rich Oberg, who owns the largest collection of original men’s adventure magazine artwork in the world, including many by Basil Gogos, told me he is almost certain Gogos did the cover painting for the premiere issue of WILDCAT ADVENTURES.

Recently, I’ve been corresponding with Basil, in preparation for an interview with him that will be posted on this blog in the near future.

I asked Basil whether he knew if he painted it.

He said he believes he did and it clearly looks like his work to him.

Given that, Rich Oberg’s opinion and my own eyeball ID, I’m 99% sure it’s a Gogos cover.

But Basil used several different styles in his men’s adventure work and 1959 was a long time ago.

So, in the absence of his signature, even Basil isn’t 100% certain.

As is typical in men’s adventure magazines, the cover painting was reused in black-and-white for the initial 2-page spread for the story it was done for. 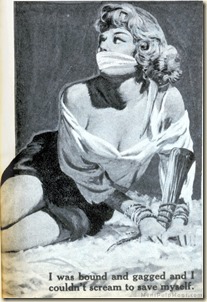 One unusual thing about this story is that half is told in the first person by distressed damsel and half is told by the hero who saves her after she is captured by Arab slavers.

Another unusual thing is that a cropped image of the damsel was altered when it was reused as a small illustration on the fourth page of the story.

The Art Director for WILDCAT ADVENTURES, Sol Brodsky, had a cloth gag painted over her mouth and ropes painted onto her wrists to make the image go with a scene in the story.

The caption says: “I was bound and gagged and I couldn’t scream to save myself.”

It was common practice to use cropped pieces of the main illustration on the jump pages where stories are continued. But the cropped images were usually used as is, not altered.

Assuming the cover for the first issue of WILDCAT ADVENTURES was painted by Basil Gogos (which I do), it was one of the first – maybe the first – of more than a hundred men’s adventure magazine illustrations he did from the late 1950s to the mid-1970s.

Another story in this issue is notable for being an excerpt from the first novel written by a man who would become a very famous (and infamous) author.

However, you wouldn’t know that unless you knew its literary history.

And, yes, it is indeed an excerpt from the legendary, semi-autobiographical novel JUNKIE by William S. Burroughs – who was indeed a serious heroin addict in the 1940s and 1950s. 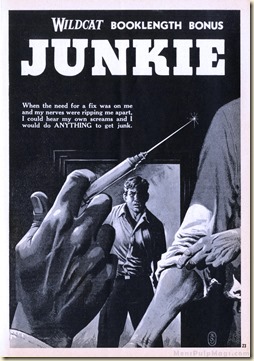 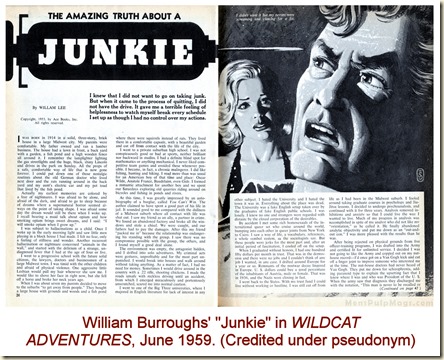 The small print under the title in the magazine notes that it comes from the 1953 Ace edition of JUNKIE, which was the first publication of the novel.

It was part of Ace Double D-15, a classic two-sided paperback that featured JUNKIE on one side and NARCOTIC AGENT, by Maurice Helbrant, on the other. 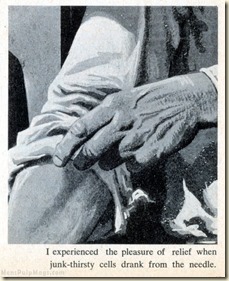 According to an excellent in-depth post about the history of JUNKIE by Jed Birmingham, on the RealityStudio site for collectors of Burroughs’ work, the novel appeared under a pseudonym “in order to protect his family from the embarrassment of their son’s drug addiction and lifestyle.”

Some observers have noted that the novel’s portrayal of homosexuality was as or even more controversial than its depiction of drug users and dealers, even though the scenes describing the protagonist’s homosexual trysts are described in a dry, matter-of-fact way that falls far short of graphic pornography as we think of it today.

Nonetheless, it wasn’t until 1977 when Penguin published the first edition of JUNKIE credited under Burroughs’ real name.

Of course, Burroughs eventually became a worldwide celebrity and copies of the Ace Double edition of JUNKIE are now extremely hard to find.

They’re also expensive. The last one I saw on Amazon was priced at $355. High quality copies are selling for even more than that on Abebooks.com.

The most recent edition of the novel updated the spelling of the title to JUNKY and doesn’t have the kind of great illustration art favored by those of us who are junkies for vintage paperbacks and magazines.

The cover painting used for the 1953 Ace edition of JUNKIE was done by artist Al Rossi.

In addition to doing paperback covers, Rossi did scores of illustrations for men’s adventure magazines in the 1950s and 1960s. (Click this link to see some great MAM artwork by him featuring my favorite model and pen pal Eva Lynd.)

Copies of the first issue of WILDCAT ADVENTURES are not quite as pricey as the original Ace Double edition of JUNKIE. But they are, if anything, harder to find. I paid over $100 for mine.

The artwork used for the “Booklength Bonus” version of JUNKIE in WILDCAT ADVENTURES is quite dramatic and quite good. Unfortunately, it’s not credited, and I was unable to identify the artist by sight in this case.

There is an artist signature, of sorts: the initials J and S inside an oval, creating what art collectors call a monogram.

The same artist signed a good number of other illustrations in Candar magazines with that monogram. But his identity has long been a mystery to me.

To try to solve this mystery, I recently posted a close-up of the monogram in the Men’s Adventure Magazines Facebook Group, which includes many members who have in-depth knowledge about vintage magazines and illustration art.

It wasn’t long before I had the answer.

Member Clark Dimond, a writer, musician and former editor of magazines for both Candar and Magazine Management, said he thought it looked like the work of artist John Severin, who did many illustrations for Robert C. Sproul’s CRACKED magazine.

Severin is also well known for his artwork for EC and Marvel comics, and the illustrations used for the WILDCAT ADVENTURES verion of JUNKIE deifntely have a comics vibe. 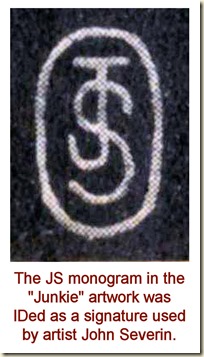 Then, in another comment in the Facebook group, illustration art collector David O’Dell, part of whose collection I have featured in previous posts here, told us that Severin had used the JS monogram as his signature for some of the artwork he did for CRACKED.

Mystery solved! Man, I love the hive mind we have in the MAM Facebook group!

Personally, I prefer its glory days as a men’s pulp mag.

For fans of that genre, WILDCAT ADVENTURES is a classic that is well worth collecting and the first issue is one of the best and most sought after.

I’ll provide a look at some of the other pulpy treasures that issue contains in a following post here.